Accessibility links
National Reaction To The Zimmerman Verdict: 'What Next?' : Code Switch George Zimmerman's acquittal in the shooting death of 17-year-old Trayvon Martin spurred emotional reaction around the country. 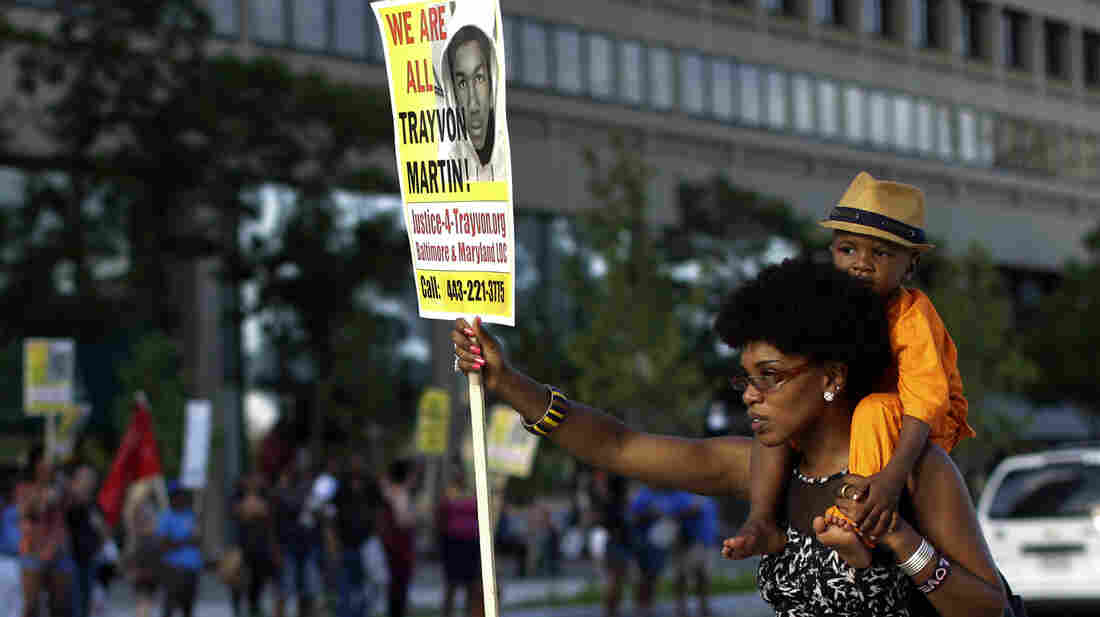 A woman, who refused to be identified, carries a young boy on her shoulders as she participates in a rally Sunday in Baltimore protesting the acquittal of George Zimmerman in the Florida shooting death of teenager Trayvon Martin. Patrick Semansky/AP hide caption 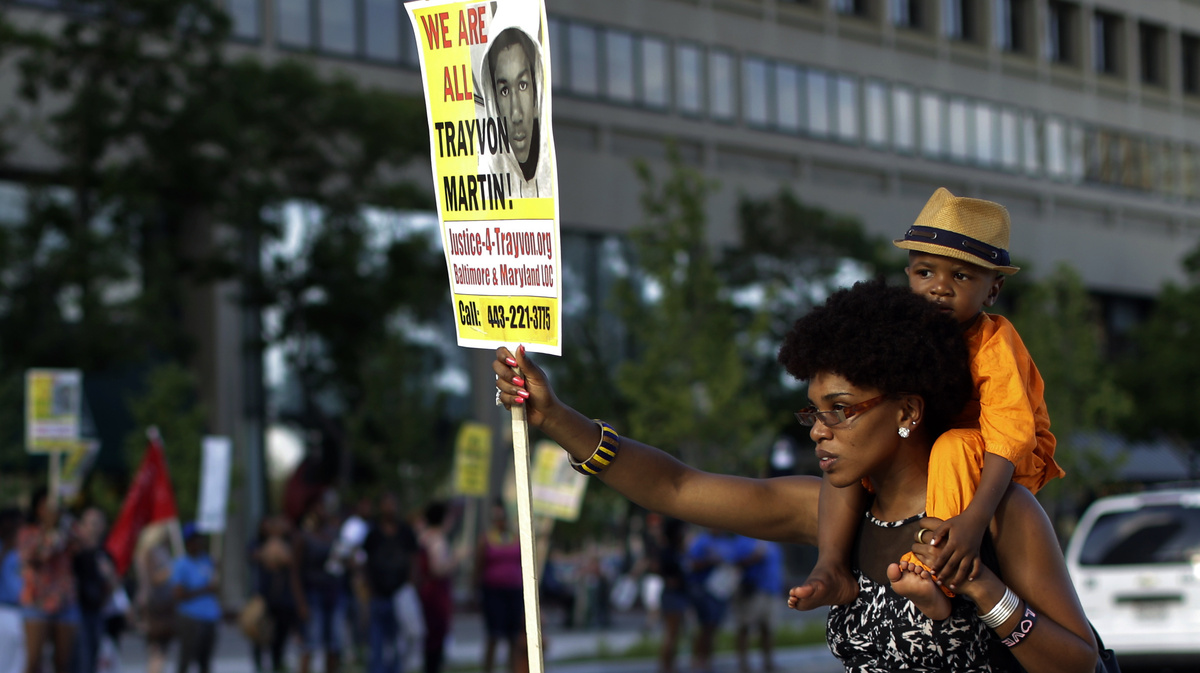 A woman, who refused to be identified, carries a young boy on her shoulders as she participates in a rally Sunday in Baltimore protesting the acquittal of George Zimmerman in the Florida shooting death of teenager Trayvon Martin.

The acquittal of George Zimmerman in the shooting death of Trayvon Martin is reverberating far beyond Florida. On Sunday, President Obama acknowledged the strong passions the verdict has incited. He asked Americans "to respect the call for calm reflection from two parents who lost their young son."

Many people are trying to make sense of a case that sparked a national conversation on race and gun laws.

Longtime civil rights leader Rep. John Lewis, D-Ga., said in a statement he was "deeply disappointed by the verdict" and that it seemed to "justify the stalking and killing of innocent black boys and deny them any avenue of self-defense."

The NAACP was, coincidentally, holding its annual conference in Orlando as the verdict was announced Saturday night in nearby Sanford, Fla.

Dominique Tuggle, who was attending the conference, said: "A completely innocent verdict was the last thing that I thought the jury would come back with, so it was shocking and very upsetting. I couldn't bring myself to watch the news or to go on any social media networks."

Wes Hall, another conference participant, pointed out that juries often hear things the public isn't privy to: "We don't know all the evidence. We can watch the trial, but when you get in that deliberation room and all those facts are laid out in front of you, that's when the true justice happens. And it's not over. Just because we have a verdict now does not mean that this story is over."

After the verdict was read Saturday night, Florida resident Christy Vick, who is white, told NPR's Hansi Lo Wang at the Sanford courthouse that she was surprised by the verdict.

"We came down here for justice for Trayvon and didn't get to see that at all," Vick said.

TV talk shows on Sunday were filled with questions about lessons learned from the Zimmerman trial.

MSNBC host Rev. Al Sharpton, who was active in the case from the beginning, raised larger questions of racial profiling and Florida gun laws, which were not part of the official Zimmerman trial.

"We were not dealing just with a narrow trial," he said. "We always were dealing with broader questions here, and that's where we need to go."

In Los Angeles on Sunday, outside West Angeles Church of God in Christ, Eric Richardson said it isn't just black Americans who view Trayvon Martin's death with concern and anger.

"You know it's serious when white folk get in it. Because there was a lot of white people out there marching for Trayvon Martin," he said. "So that means that, you know, we're not talking about it's a black thing. You had people of all colors out there that were marching for this young man and for justice for him."

Worshippers at the nearby Trinity Baptist Church prayed for the Martin family — as well as for Zimmerman.

As church-goers filed out after the service, Rev. William Code said he prayed for peace, and that he wasn't concerned about violence in the wake of the verdict. Yet he believes Zimmerman may feel haunted by his actions on that February night.

"One thing you cannot do, you cannot get away from what you have done," said Code.

Rev. Alvin Tunstill, Jr., a pastor at Trinity Church, said Trayvon Martin's death resonated with him again recently when his youngest son, who had just turned 20, told him: "Well, I made it."

"I said, 'What do you mean?' He said, 'Well, we all knew that you were always concerned that we wouldn't make it through our teen years.'"

Tunstill said he urged his congregation to extend mercy to Zimmerman, even as he hopes for eventual justice for the Martin family. "We want mercy and justice," he said, "and I think God is able to do both."