Accessibility links
The 40-Year-Old Photo That Gives Us A Reason To Smile : Code Switch After George Zimmerman was acquitted in the shooting death of Trayvon Martin, a former Detroit-area photographer was reminded of an photo he took in 1973. He posted it to his Facebook page, and it's since gone viral. 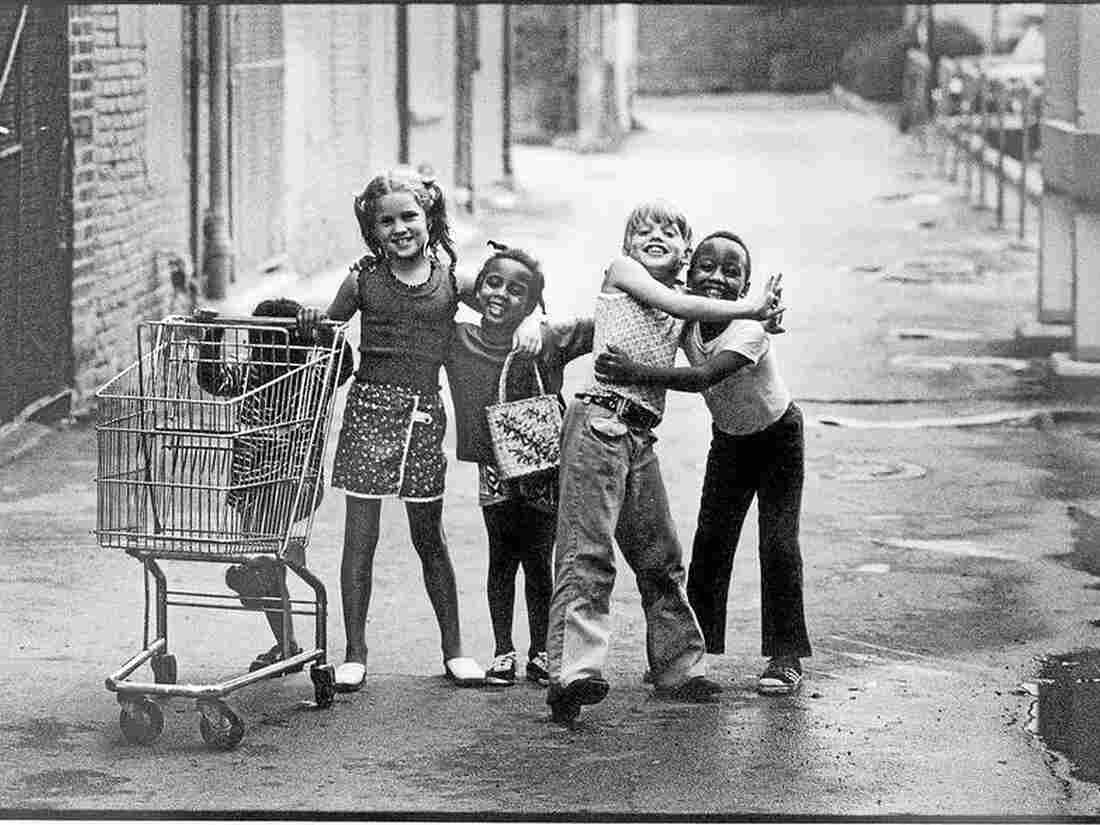 This 1973 photo of five children playing in a Detroit suburb has gone viral on the Internet. The children were Rhonda Shelly, 3 (from left), Kathy Macool, 7, Lisa Shelly, 5, Chris Macool, 9, and Robert Shelly, 6. Joe Crachiola/Courtesy of The Macomb Daily hide caption

In late July 1973, Joseph Crachiola was wandering the streets of Mount Clemens, Mich., a suburb of Detroit, with his camera. As a staff photographer for the Macomb Daily, he was expected to keep an eye out for good feature images — "those little slices of life that can stand on their own."

The slice of life he caught that day was a picture of five young friends in a rain-washed alley in downtown Mount Clemens. And what distinguishes it are its subjects: three black children, two white ones, giggling in each others' arms.

"It was just one of those evenings," Crachiola remembers. "I saw these kids — they were just playing around. And I started shooting some pictures of them. At some point, they saw me and they all turned and looked at me and struck that pose that you see in the picture. It was totally spontaneous. I had nothing to do with the way they arranged themselves."

This week, Crachiola, who now lives in New Orleans, posted the vintage photo on his Facebook page.

"For me, it still stands as one of my most meaningful pictures," he wrote in his post. "It makes me wonder... At what point do we begin to mistrust one another? When do we begin to judge one another based on gender or race? I have always wondered what happened to these children. I wonder if they are still friends."

After several days when the world seemed to be reduced to one big argument about race, the elegantly simple photo hit a nerve — in a good way.

After his Sunday post, Crachiola's Facebook page blew up — as many as 100,000 page views. Six thousand "likes" and thousands of shares. The Macomb Daily reprinted the photo on its Web page and sent someone to the archives to help identify the children, who are now middle-aged.

It's hard not to smile while looking at this picture. Crachiola liked it so much himself that he printed a large copy and has it hanging in his dining room. Former Michigan Rep. Don Riegle reportedly also liked it so much, he got a framed copy and hung it in his office.

Crachiola says that learning of the verdict in the George Zimmerman trial reminded him of the photo and made him think to post it.

He's been gratified by the response. Between Facebook and the newspaper, he has solid leads on where the children are today. "Someone emailed me saying he works with one of the guys who was in the picture," Crachiola says. "He actually works for the Macomb County Road Commission." And just before we spoke, Crachiola saw someone had posted an even more intriguing note: "This," wrote Darnesha Taylor Shelly, "is my husband and sister in laws."