Accessibility links
Comedian Hari Kondabolu On Diversity, Race And Burger King : Code Switch An Indian-American comedian unafraid to joke politely about race and politics, Hari Kondabolu regularly challenges long-standing beliefs with his material. While his comedy is about being treated like an outsider, the jokes offer a sense of community. 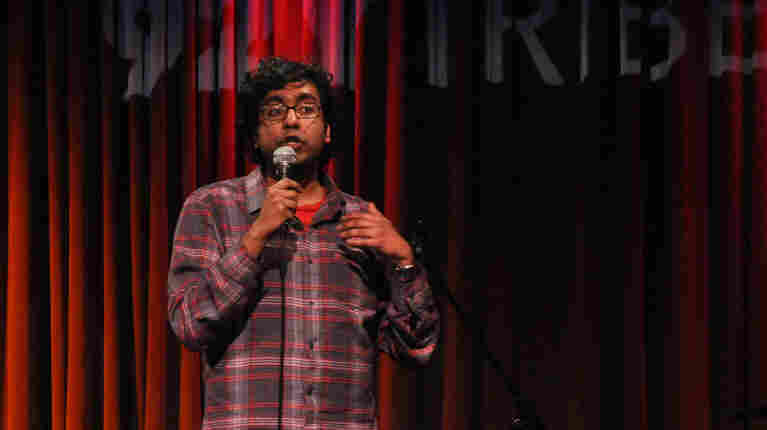 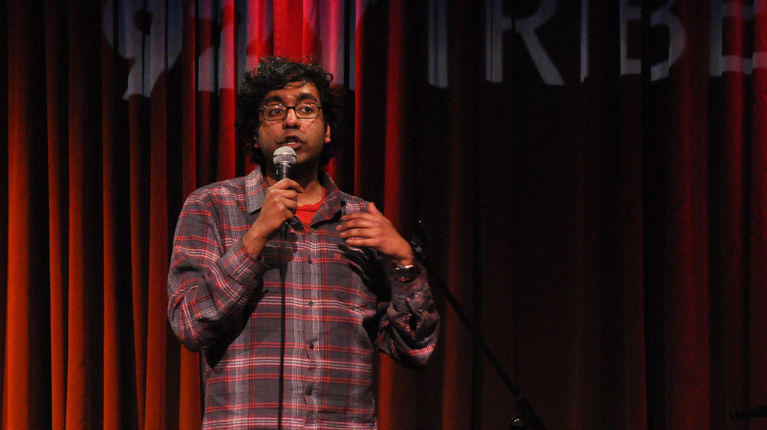 Hari Kondabolu is a brainy comedian who cuts through the polite talk around race and gender. He's made a lot of key people laugh with his incisive anecdotes, including Jimmy Kimmel, Conan O'Brien and John Oliver.

A full-time writer on the FX show Totally Biased with W. Kamau Bell, he recently did a comedy bit on the National Spelling Bee, or "as I like to call it," he joked, "the Indian Super Bowl."

Kondabolu makes a fair point: For six years in a row, the winner has been Indian-American. As a result, he continued, "it gives me great pleasure to finally be able to say 'Hey white people, learn the language.' "

At first he was reluctant to write a bit about South Asians winning the spelling bee because it's kind of a cliché.

"At the same time, I'm like: Let's own it," Kondabolu explains. "There's nothing embarrassing about kids doing well at school and dominating that happen to be South Asian, which is very exciting for me. And there aren't any South Asian athletes. I mean Jeremy Lin was Taiwanese-American. I took ownership of that. It's as close as we've gotten.

"But this is something we dominate at. This isn't the Indian Cricket team. These are South Asian-Americans, Indian-Americans dominating. And I loved it."

Thirteen-year-old Arvind Mahankali won this year's spelling bee. During his interview after his victory, he said that he planned to spend the rest of his summer studying physics. Kondabolu jokes, "He's a two-sport athlete!"

A Time To Unite?

Kondabolu was born and raised in a diverse neighborhood in Queens, N.Y., which he describes as having "different immigration status, different income levels, different languages, different parts of the world. It was incredible."

His parents were born in India and moved to the U.S. when they were in their 20s. Kondabolu describes a time in his childhood when his mother took him and his brother to Burger King, because she wanted them to assimilate into American society.

"We never saw something strange about that," he says. "As I got older, it was kind of bizarre, like 'Wait a second, why are you, why? Why did you take us to Burger King and, if we're Hindu, how come you let us eat beef?' She said that she wanted us to get used to what it was like to be an American, and apparently Burger King, well, it's fast food. What's more American than fast food?"

His mother, Uma Kondabolu, laughs as she says that, yes, she did take her sons to Burger King because it is very American but also where they found people of all backgrounds.

Uma wanted her kids to see that interacting with people of all colors was not "bad" or "scary." And Hari Kondabolu says that he felt safe growing up in his Queens neighborhood. He didn't think racism was a serious problem until the terrorist attacks of Sept. 11.

"And you're telling me, after this, everyone's claiming we're all coming together, we're getting closer, this is a time where we unite. It's like, really? Because, in my community, I see people getting hurt and being put into detention centers."

As a result, Kondabolu became politically active. He worked in the Queens district attorney's office bureau of hate crimes, went to Seattle to work for an immigrant rights group and got his masters in human rights at the London School of Economics.

All the while, his stand-up comedy was just a hobby. The idea of doing it full-time came when, in the early 1990s, Kondabolu saw Margaret Cho on Comedy Central.

"To see someone who wasn't black or Latino or white do stand-up was huge," Kondabulo explains. "And she was talking about immigrant parents, and I have immigrant parents — my parents are different from her parents, but she was talking about it. And that was OK, and it was funny. I was so amazed by that. I wanted to do that after watching her perform."

'A Good Laugh Over A Drink'

Today, Kondabolu's material is not so much about his own family, but about being an outsider in general — or at least being treated like one. And he's not afraid of challenging some long-standing beliefs.

Kondabolu says he knows some people won't like his point of view. "I've been approached after shows from people who said, 'I don't agree with anything you said, but I laughed the whole way through.' That's still a little strange to me. Like, nothing? Really? But at the same time that's what happens in a conversation. You might not agree with everything the other person is saying, but you can still have a good laugh over a drink, right?"

At the show in Washington, D.C., the audience was very diverse and didn't seem to have a problem with his point of view.

"People keep bringing up the year 2042 on the news when Census figures indicate that whites will be the minority," he joked. "In 2042, apparently white people will be 49 percent. First of all, why do we give a f--k? Why do we keep mentioning this? Why is this even an issue? Are there white people here that are concerned that they'll be the minority in 2042? Don't worry white people, you were a minority when you came to this country. Things seemed to have worked out for you."

Kondabolu also recently recorded material for his first live comedy album, being released on the record label Kill Rock Stars. Although the label is best known for punk rock, Kondabolu thinks it's a perfect fit.