Accessibility links
After Years Of Violence, L.A.'s Watts Sees Crime Subside : Code Switch For decades, the Watts neighborhood has been notorious for gang violence and strained relations between residents and police. But violent crime and homicide have fallen dramatically in recent years, and a community policing effort is helping to ease tensions between cops and the community. 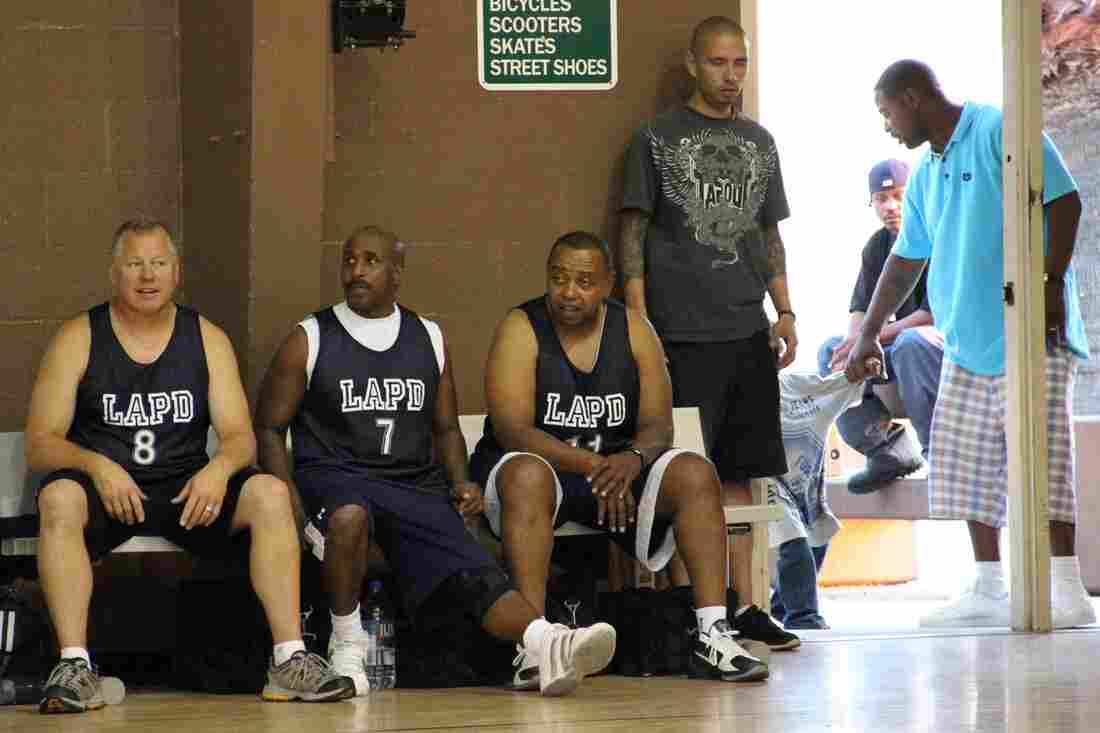 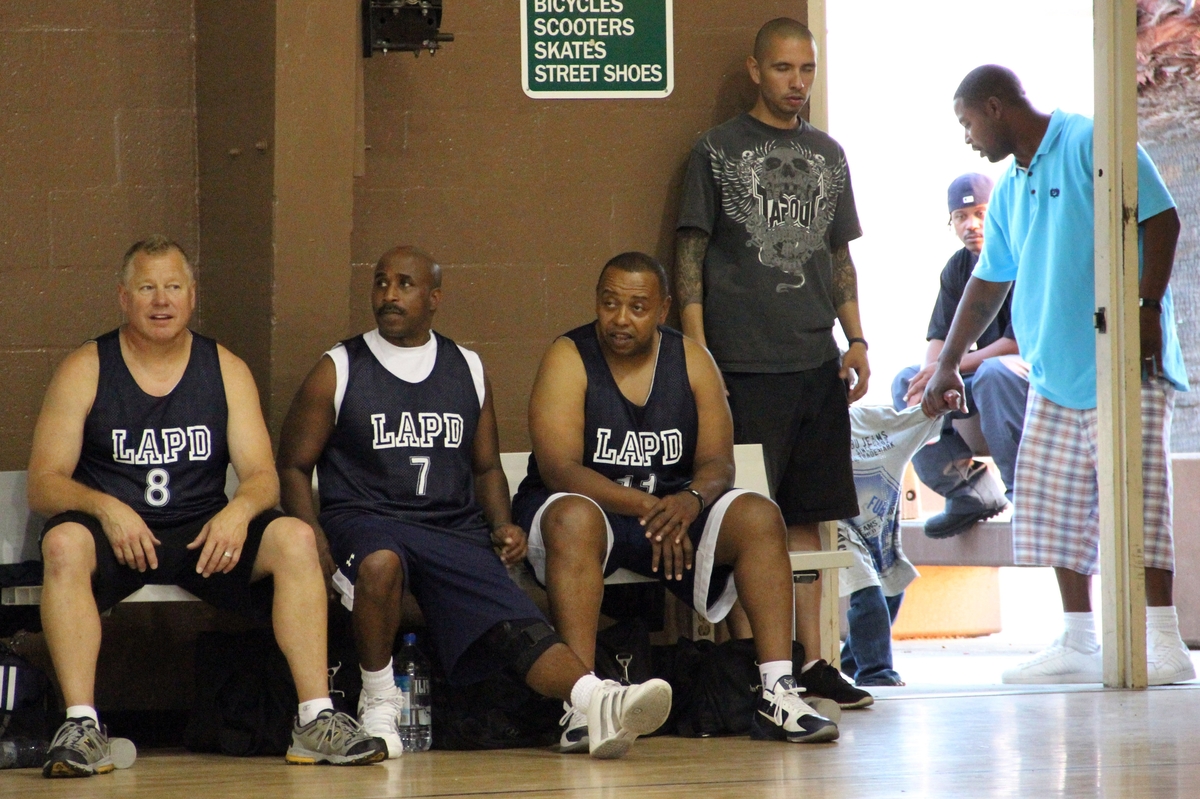 On most weeknights, in the middle of his shift, Los Angeles police officer Keith Mott trades his gun and uniform for a T-shirt and shorts, and heads to a park in the Watts neighborhood of South Los Angeles. He's there to coach 7- and 8-year-old boys on the Pop Warner Pee Wee football team, the Watts Bears.

The kids come from three nearby housing projects: Jordan Downs, Nickerson Gardens and Imperial Courts. The park was carefully chosen. It's a neutral site for local gangs. Otherwise, most of the Bears' parents wouldn't allow them to come and play.

Since the 1960s, the Watts neighborhood of South Los Angeles has been synonymous with gang violence and racial tension. Combative relations between police and members of the community have long been the norm.

Lately, there's been some improvement. Violent crime has dropped by almost 50 percent in three of Watts' toughest housing projects. There's been only one homicide there in the past two years.

It's a dramatic turnaround — one that's explained in part by proactive efforts by community leaders and changes within the Los Angeles Police Department.

"Even some of the parents who have come out here ... they've talked to us, and they've told us, 'You know, the idea of me standing next to a police officer, [after] all the years I've hated the police.' And they realize we're just here trying to make a difference in the community," Mott says.

Mott, with the LAPD's Southeast Division, is not just any Los Angeles police officer. He's one of 30 cops selected to be part of the force's relatively new anti-crime effort in Watts, the Community Safety Partnership. It's a pilot program targeting the three projects where the Watts Bears' kids come from.

Much of the time, the officers patrol the sprawling, two-story developments on foot. They try to be on a first-name basis with residents. The idea is to engage more than arrest, Mott says, and the program's early success is backed up by the numbers. 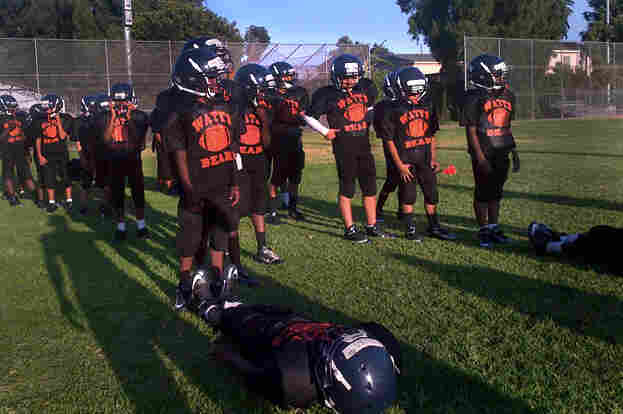 The Los Angeles Police Department helped launch the Watts Bears, a team of the Pee Wee division of Pop Warner football, in 2012. The players come from the neighborhood and practice at a park that's considered a neutral site between local gangs. Courtesy of The Housing Authority of the City of Los Angeles hide caption 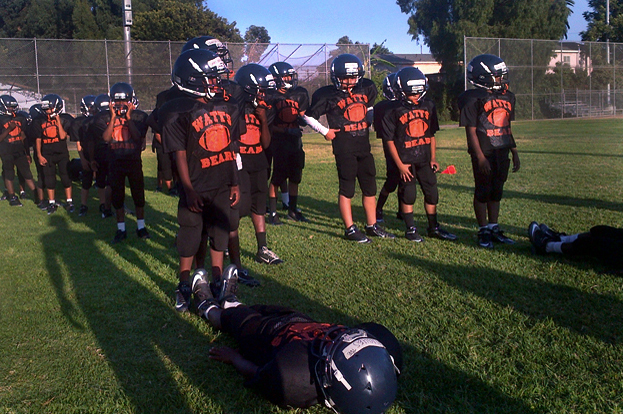 The Los Angeles Police Department helped launch the Watts Bears, a team of the Pee Wee division of Pop Warner football, in 2012. The players come from the neighborhood and practice at a park that's considered a neutral site between local gangs.

Courtesy of The Housing Authority of the City of Los Angeles

Take homicides, for example. Among the three projects, there were 43 between 2005 and August 2011 — the month the Community Safety Partnership began. There's been just one homicide since. And according to the LAPD, since 2010, violent crime is down 57 percent in Imperial Courts, 54 percent in Jordan Downs and 38 percent in Nickerson Gardens.

"People look around and they're always seeing the officers," Mott says. "The gangsters, the knuckleheads and the dope dealers, they look around their corners. [If] there's a police officer on the corner, they're moving their activities elsewhere."

A Community Steps Up

Some of the crime Mott is referring to has just moved elsewhere, like the streets beyond the three projects that the CSP isn't currently patrolling. And some residents who regularly attend a weekly anti-gang task force in Watts say crime is on the uptick in a fourth housing project known as Gonzaque Village.

Still, at those community meetings, people are sitting at the table and bringing up issues to the police. There's dialogue and, sometimes, action. This sort of thing would never have happened here 10 or 15 years ago.

Hang around the neighborhood for a few days, and it's clear the CSP isn't the only reason the projects are getting safer.

At a recent "Summer Night Lights" event at Imperial Courts, kids drink Kool-Aid, munch on chili dogs and get their faces painted. The older ones are in the gym playing in a basketball league. The gray, cinder block recreation center sits at the heart of the World War II-era apartment buildings lined with peeling green paint.

These days, the recreation center is for more than just sports. Perry Crouch, who's lived in Watts since 1955, does a lot of his gang intervention work here. He says residents and some former gang members here simply got fed up with all the violence and demanded change.

"What we have to do is lead through example," Crouch says. "You're not going to come up in here and fight and cuss and do all that and gang-bang; that ain't the lip."

Crouch wins a lot of praise here for helping create safe zones like this and for brokering several treaties between warring gangs recently. Over the years, Crouch has made some of the loudest calls for police reforms, too.

The reforms have come, he says, starting with the LAPD's former Chief William Bratton and continuing today with Chief Charlie Beck.

"Having officers be more in touch with the community, instead of just hooking and booking," he says.

Memories of the race riots of the 1960s, police brutality and Rodney King still haunt every corner. And even with the improved police relations, there's still tension.

One afternoon in Imperial Courts, two CSP officers get out of their cars and walk briskly up to three teenagers parked legally across from the recreation center. Their music is up loud, but the teens are just hanging out and talking sports. The cops tell them to leave; they don't want people congregating in this area, they say, because there could soon be 20 or 30 people.

One of the officers accuses one of the teens of mouthing off. The teen speeds off in disgust, and the officers think about pursuing him — but in the end, they don't. They're also mindful of a growing crowd of onlookers across the street.

Joe Evans, who lives and works in Imperial Courts as a teen mentor, says situations like these sometimes escalate into something much worse.

"Because you have a lot of people who's looking from the outside, they don't know what's being said," Evans says. "They automatically assume, 'OK, the police is harassing this person.' "

Evans says the police harassment still happens from time to time, and that there are even a couple of CSP officers who still don't get the idea of engagement. But like a lot of people here, Evans says these projects are getting safer overall.

Evans is glad to see the crime drop in his neighborhood. Just a few years ago, he says, it wouldn't have been safe to stand out in the open here and do an interview.

"It was like a war zone at times," Evans says.