Accessibility links
Harry Belafonte, Jay Z And Intergenerational Beef : Code Switch Harry Belafonte's spat with Jay Z is the latest skirmish in a decades-long debate over the social obligations of black celebrities. How we perceive black supercelebrities may be a Rorschach test for how we perceive the condition of black America at large. 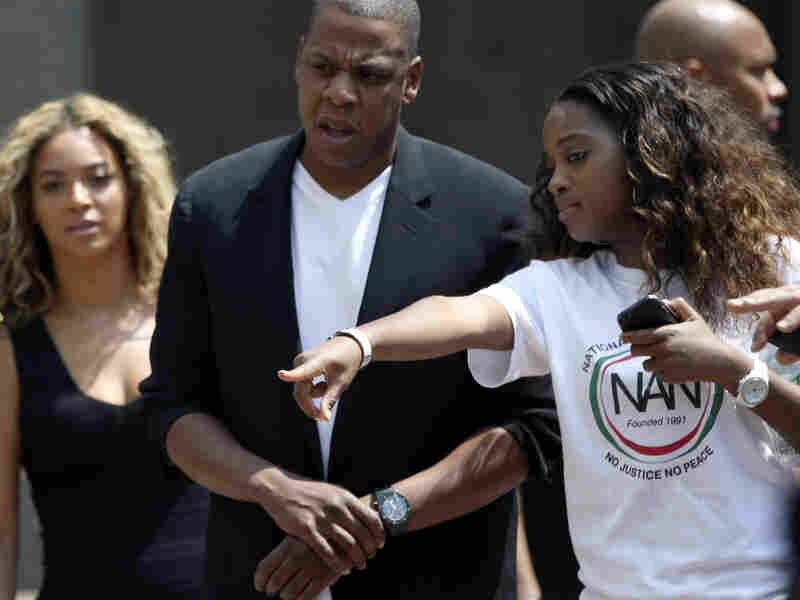 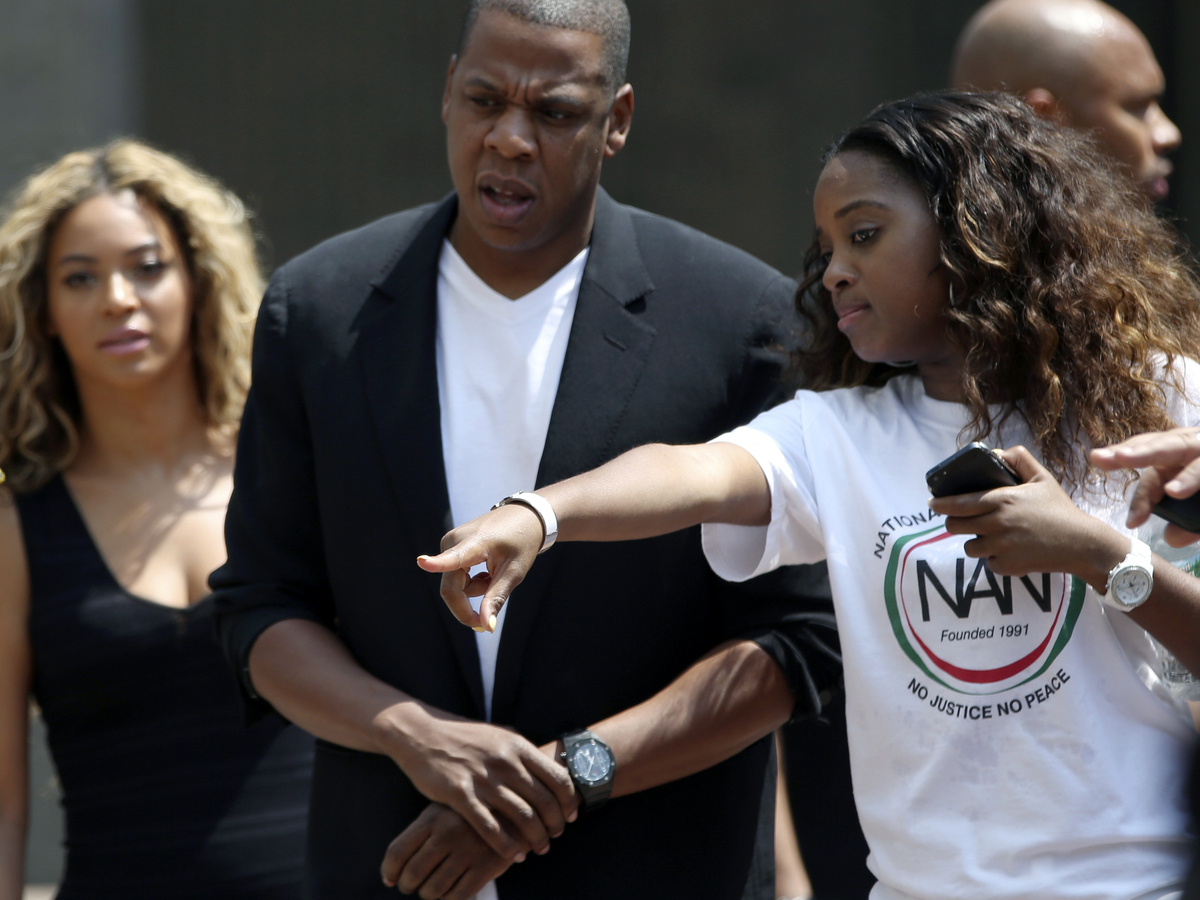 Beyonce (left) and Jay Z arrive at a "Justice for Trayvon" rally in New York earlier this month.

Hip-hop beefs don't burn any slower or get any more bizarre.

Last year, Harry Belafonte, the acclaimed singer, actor and civil rights activist, was awkwardly quoted by a foreign reporter in a Q&A about modern celebrity and social responsibility. The always-outspoken Belafonte didn't really hold back.

Q: Are you happy with the image of members of minorities in Hollywood today?

A: Not at all. They have not told the history of our people, nothing of who we are. We are still looking. ... And I think one of the great abuses of this modern time is that we should have had such high-profile artists, powerful celebrities. But they have turned their back on social responsibility. That goes for Jay-Z and Beyonce, for example. Give me Bruce Springsteen, and now you're talking. I really think he is black.

Jay Z responded churlishly to Belafonte's shade, first in lyrics on his latest album, and then more expansively in an interview with Elliot Wilson last week:

I'm offended by that because first of all, and this is going to sound arrogant, but my presence is charity. Just who I am. Just like Obama's is. Obama provides hope. Whether he does anything, the hope that he provides for a nation, and outside of America is enough. Just being who he is. You're the first black president. If he speaks on any issue or anything he should be left alone. ... I felt Belafonte ... just went about it wrong. Like the way he did it in the media, and then he bigged up Bruce Springsteen or somebody. And it was like, 'whoa,' you just sent the wrong message all the way around. ... Bruce Springsteen is a great guy. You're this civil rights activist and you just bigged up the white guy against me in the white media. And I'm not saying that in a racial way. I'm just saying what it is. The fact of what it was. And that was just the wrong way to go about it.

When folks began weighing in on Jay Z's response, they mostly reduced it to the cringe-worthy "my presence is charity" phrasing. Others chided Jay Z for being insufficiently deferential to Belafonte. (Few people who were co-signing of Belafonte's comments seemed to acknowledge why being called less black than Bruce Springsteen by someone of Belafonte's stature might tick someone off.)

On the flip side, Jay Z is the biggest celebrity hip-hop has ever produced. He's the avatar in conversations about hip-hop's global dominance and its excesses, its achievements and its failings. He is a kind of living, breathing shorthand for hip-hop — it's why President Obama name-checks him so much and invites him to the White House; they're trading on each other's credibility and cultural/political relevance. Jay Z is the most obvious target for intergenerational sniping, whether it's coming from Belafonte or your auntie over Sunday dinner.

This conversation about representation and responsibility invariably accompanies being a black celebrity in America. Is (Tyler Perry/Oprah Winfrey/Michael Jordan/Beyonce) good for the Negro? How we perceive black supercelebrities is a Rorschach test for how we perceive the condition of black America at large. Depending on whom you ask, Jay Z might be either a symbol of black entrepreneurship and bootstrapping capitalism or a sign of the decline of black society in America.

The Belafonte-Jigga tete-a-tete was only the latest skirmish between the hip-hop generation and the civil rights generation types. C. Dolores Tucker famously squabbled with Tupac Shakur. The Rev. Calvin O. Butts used to buy hip-hop CDs and stomp them into pieces on the street. Never mind that framing wildly oversimplifies and overlooks the social critique that's always been a part of hip-hop. (The whole second verse of Jay Z's "99 Problems" could have been ghostwritten by the ACLU.) The accusation of hip-hop's supposed social irresponsibility also serves to further romanticize and uplift the reputation of the civil rights generation; to hear some folks tell it, you'd think everybody alive in the 1960s was a boycotter or a Freedom Rider. History gets flattened in the retelling. We now remember Muhammad Ali as a dignified man of principle and not as the cocky rabble-rouser who unsettled and perturbed plenty of whites and plenty of blacks who felt that he was crass and his antics unhelpful.

And so, the commentary around these regular intergenerational flare-ups often passingly acknowledges how profoundly the cultural landscape has changed.

Belafonte was a celebrity and a bona fide, full-time political activist. (Belafonte was a major fundraiser for Martin Luther King's Birmingham campaign, which was largely organized from Belafonte's New York City apartment.) For much of American history, the act of being black and famous was an inherently political act. Marian Anderson, Joe Louis, Bill Russell — just pick someone, really — all challenged the established order simply by being. Their presences weren't charity, per se, but they were of enormous consequence.

Black celebrityhood operates much differently now — and it's different in large part because of the efforts of Belafonte and so many of his contemporaries. Jay Z and so many of us who grew up listening to his music inherited a world dramatically different than Belafonte. Whatever world the next generation inherits will have its own distinct guidelines and understanding of what social responsibility looks like.

Belafonte is criticizing Jay Z and Jay Z isn't bowing in deference —after, all that's not how hip-hop has ever worked. (Belafonte has since said he'd like to meet in person with Jay Z to squash their beef.) Whatever you think about the merits of their arguments, they are operating from two deeply disparate cultural contexts. Belafonte was at the peak of his fame in a world where he fought just so people could exercise the right to vote. Now, we live in a world where Jay Z gets quoted by the first black president. Just 20 years ago, that last scenario would have felt like jokey speculative fiction.

Is it any wonder they're talking past each other?