Accessibility links
Consumer Groups On The Lookout For Immigration Scams : Code Switch There's been a lot of talk about immigration reform on Capitol Hill this summer. But scam artists are not waiting for a new law to pass before luring unsuspecting immigrants with the possibility of gaining legal status. Local consumer protection agencies are trying to prevent immigrants from becoming fraud victims. 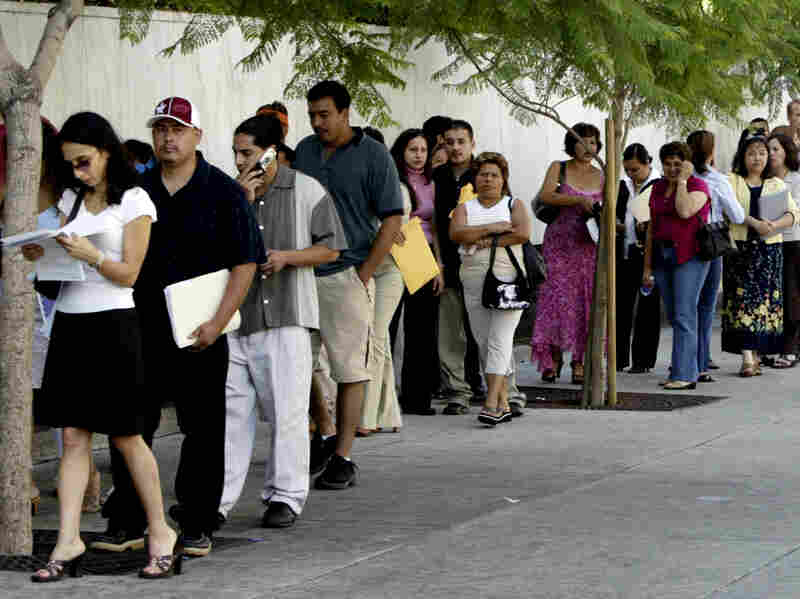 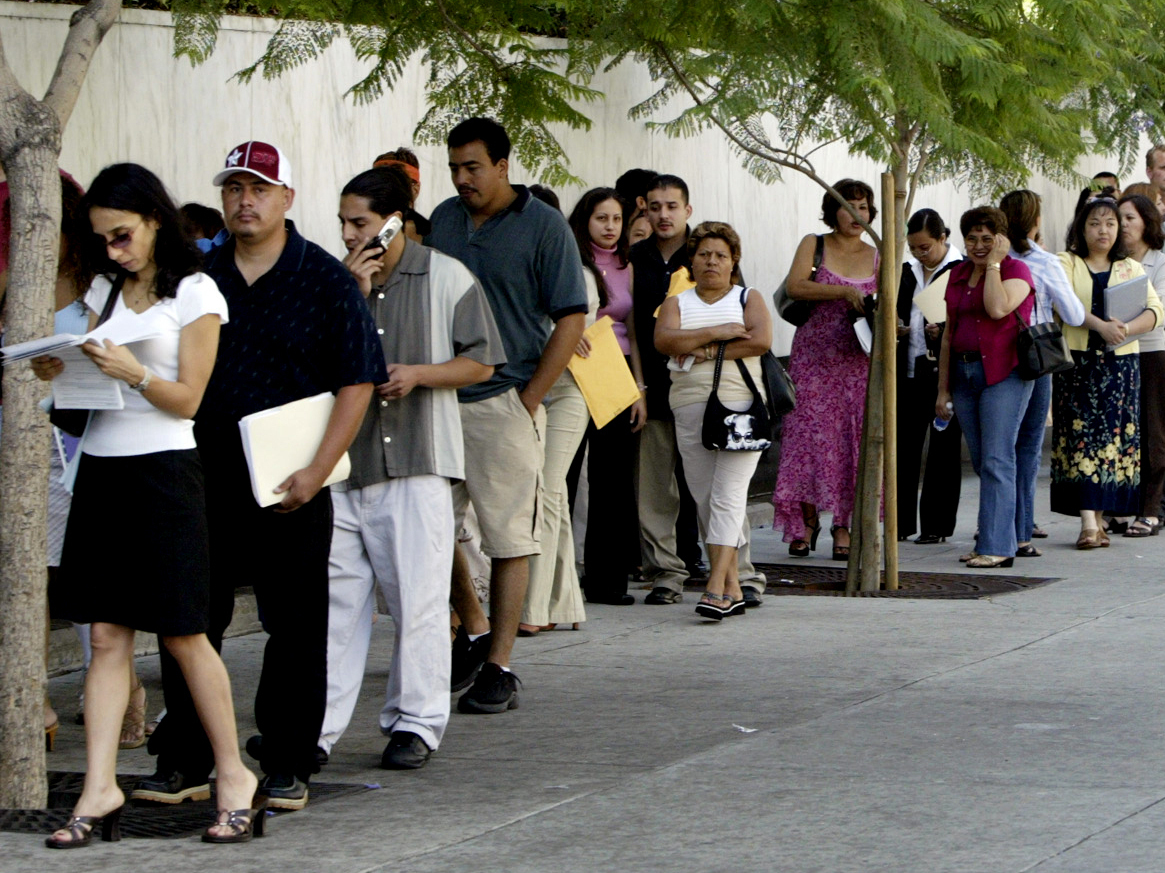 A line waits outside the U.S. Citizenship and Immigration Services office in Los Angeles.

Talk about immigration reform on Capitol Hill this summer has raised the hopes of many unauthorized immigrants around the country.

It's also raised the fears of consumer advocates worried about scam artists who promise immigrants they can help them secure legal status.

Eduardo Flores, an unauthorized immigrant from Honduras, wasn't promised immigration documents, but he did place his trust and $4,000 with a man who said he was an immigration attorney.

A construction worker who installs air conditioning units, Flores lives in Virginia, just outside Washington, D.C., with his wife, two daughters and his mother-in-law in a two-bedroom apartment. In 2011, Flores, trying to help a friend, called up Luis Ramirez, whom his wife had heard on Spanish-language radio.

Ramirez, who was not a licensed attorney, told Flores he could help bail his friend out of jail with $4,000. Flores gave him the money. But Ramirez never posted the bail, and Flores' friend was eventually deported.

It's a story of deception that's common among unauthorized immigrants. And it's becoming more so as the legislative process for immigration reform generates talk in the media, says Monica Vaca, an attorney with the Federal Trade Commission's consumer protection bureau.

"You do have con artists who are out there who use the [news headlines] to generate a little bit of confusion," Vaca says.

That confusion that can lure unsuspecting immigrants into paying a high price.

"They don't just lose money. They might be losing something far more valuable," Vaca says.

Victims of immigration fraud may also lose eligibility to apply for a green card or citizenship because someone who pretends to be a licensed legal services provider has incorrectly filled out a required immigration form or sometimes not even submitted it at all.

At that point, it becomes a consumer fraud issue, says attorney David Zetoony, a partner at the private law firm Bryan Cave in Washington, D.C. And after hearing news about scam artists pretending to be immigration lawyers, he took on a few cases.

Rigo Reyes has been tracking immigration fraud at the Los Angeles County Department of Consumer Affairs for the past 15 years. He says victims often hold out hope even when they suspect they're being cheated.

"Consumers wait until the very end before they convince themselves that they were defrauded," Reyes explains. "So it's not unusual for consumers to wait two, three, [or] five years."

Recently, immigrants have been quick to report a new trend — scammers who say they can get immigrants on a waiting list for permanent residency or citizenship as soon as the president signs a new immigration law, which, of course, hasn't happened and may not happen at all.

Last year, the FTC's Consumer Sentinel Network, an online database of consumer complaints for law enforcement, received more than 700 complaints about immigration services. Vaca admits it may not be the most accurate count given language barriers, fear of the government and other challenges that often prevent immigrants from reporting fraud.

Still, immigration attorneys like Patricia Chiriboga-Roby say fraud is a common problem within immigrant communities. Part of the reason may be confusion about who can provide legal advice on immigration matters.

"Immigration law is the only area of law where individuals can be authorized to provide legal services even if they're not attorneys," says Chiriboga-Roby, who runs the World Relief Baltimore Immigration Legal Clinic.

Law school students or nonprofit staff members approved by the Board of Immigration Appeals may also represent immigrants. But, Chiriboga-Roby warns, keeping up with changes in immigration law can be difficult even for licensed attorneys, let alone accredited representatives without law degrees.

"To tell you the truth, I don't keep up [with the immigration reform bills in Congress] because there's going to be so many changes that what is proposed today may have nothing to do with what passes tomorrow," Chiriboga-Roby says.

A Man On A Mission

For Flores, falling for a con turned him into a man on a mission.

"Many people are afraid of going to the police [if they're unauthorized immigrants and victims of fraud]," he says in Spanish through an interpreter. "Many people told me, 'Eduardo, don't do this. You'll have problems. You'll be deported.' "

Flores says he wasn't afraid. Rather, he was angry had been tricked into giving $4,000 to a con man.

"Who knows how many people he had hurt? I was going to try and stop him," he explains. "I told him, 'I have faith in God that I will see you in court one day.' "

Flores and Zetoony, his attorney, won a civil suit against Luis Ramirez in January. Last December, Ramirez also pleaded guilty to three felony charges for obtaining money under false pretenses from other immigrants.