Accessibility links
Sikhs Remember Tragedy By Embracing Faith : Code Switch Last August, a Sikh community in Wisconsin lost six of its members in a mass shooting before Sunday services. Some local Sikhs say they've become more devoted in the year since the tragedy, and have begun wearing turbans and long beards in an effort to raise awareness and understanding of the faith. 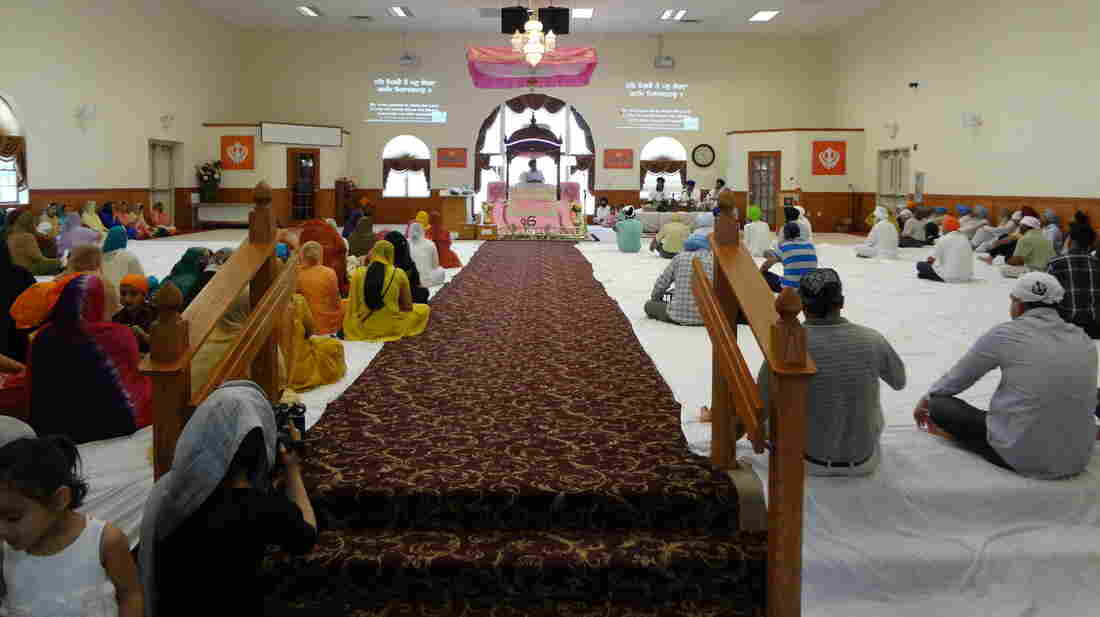 Worshippers at the Sikh Temple of Wisconsin in Oak Creek. The Aug. 5, 2012, shooting tragedy has brought some Sikhs closer to their faith. Erin Toner/WUWM hide caption 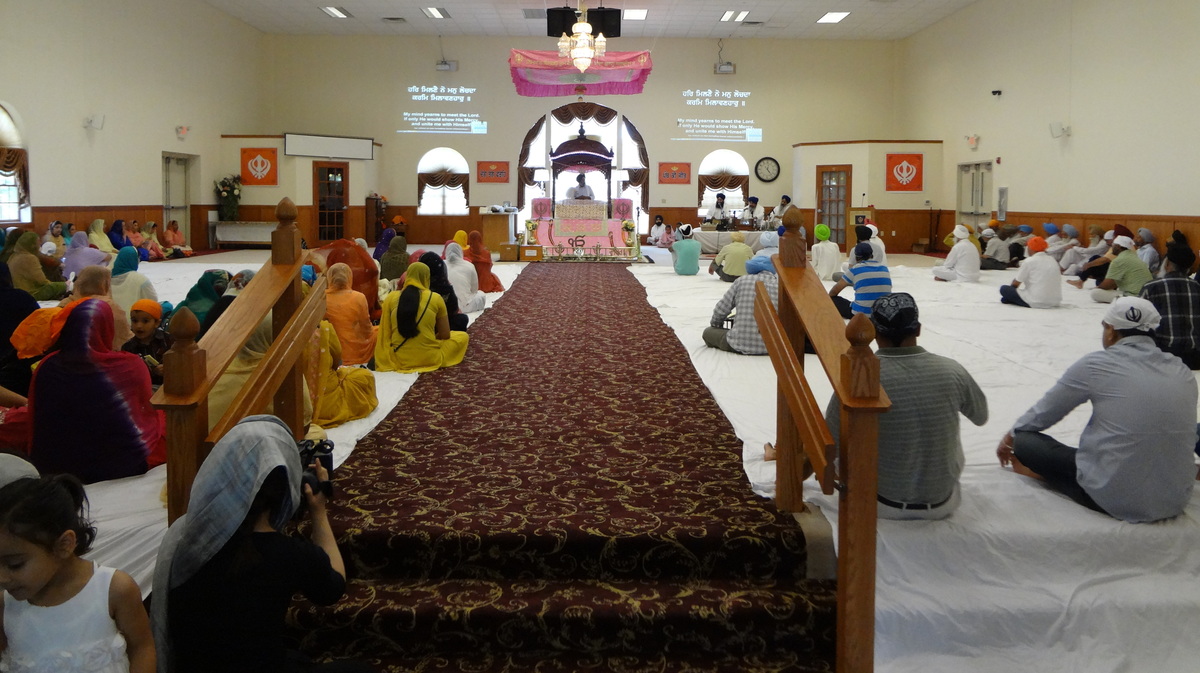 Worshippers at the Sikh Temple of Wisconsin in Oak Creek. The Aug. 5, 2012, shooting tragedy has brought some Sikhs closer to their faith.

Every Sunday, hundreds of worshippers descend on the Sikh Temple of Wisconsin in Oak Creek, just south of Milwaukee. They come here to pray and to eat a weekly meal together, called a langar. On Aug. 5, 2012, as women were preparing the meal, a gunman opened fire, killing six people, including the temple president, a priest, fathers and a mother, before turning the gun on himself. Photos of the victims now hang in the lobby of the temple, called a gurdwara.

Traditionally, when worshippers come to the gurdwara, they wash their hands, have snacks, and then sit down and listen to the service, says Dr. Kulwant Dhaliwal, the current temple president. He's urging members of this congregation to keep their spirits up as the shooting anniversary approaches.

"The community has been gradually sort of healing and settling down," he says. "Of course the families who lost their loved ones will never probably lead the [same] life. .... Their lives changed forever."

This weekend, the temple will hold a series of events to honor the victims, including a continuous recitation of the Sikh holy book, cover to cover. It's a ritual that happens at both happy and sad events, and is intended to bring peace and solace.

Sikhism began in the 15th century in the Punjab region in South Asia. Its basic tenets are equality, living by honest means and helping the needy. But since the Sept. 11, 2001, terrorist attacks, some Sikhs in the United States have been harassed or attacked by people wrongly assuming they're Muslim extremists.

A security guard now sits just inside the temple's front entrance — a constant reminder of the violence that erupted there last summer. Nirmal Singh says she still gets nervous when she walks in from the parking lot, and her kids still have questions.

"Especially my youngest daughter, she's 6 years old. She'll be like, 'Why this has to happen?' And I say, 'You know what? We live in a world where anything could happen, not only shootings, but anything,' Singh says. "So that's what I tell them. I say, 'Just be safe.' " 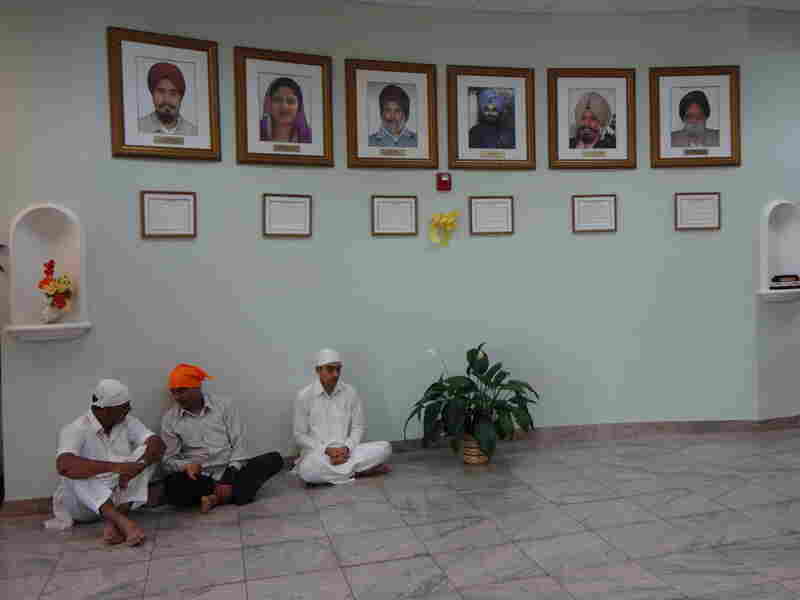 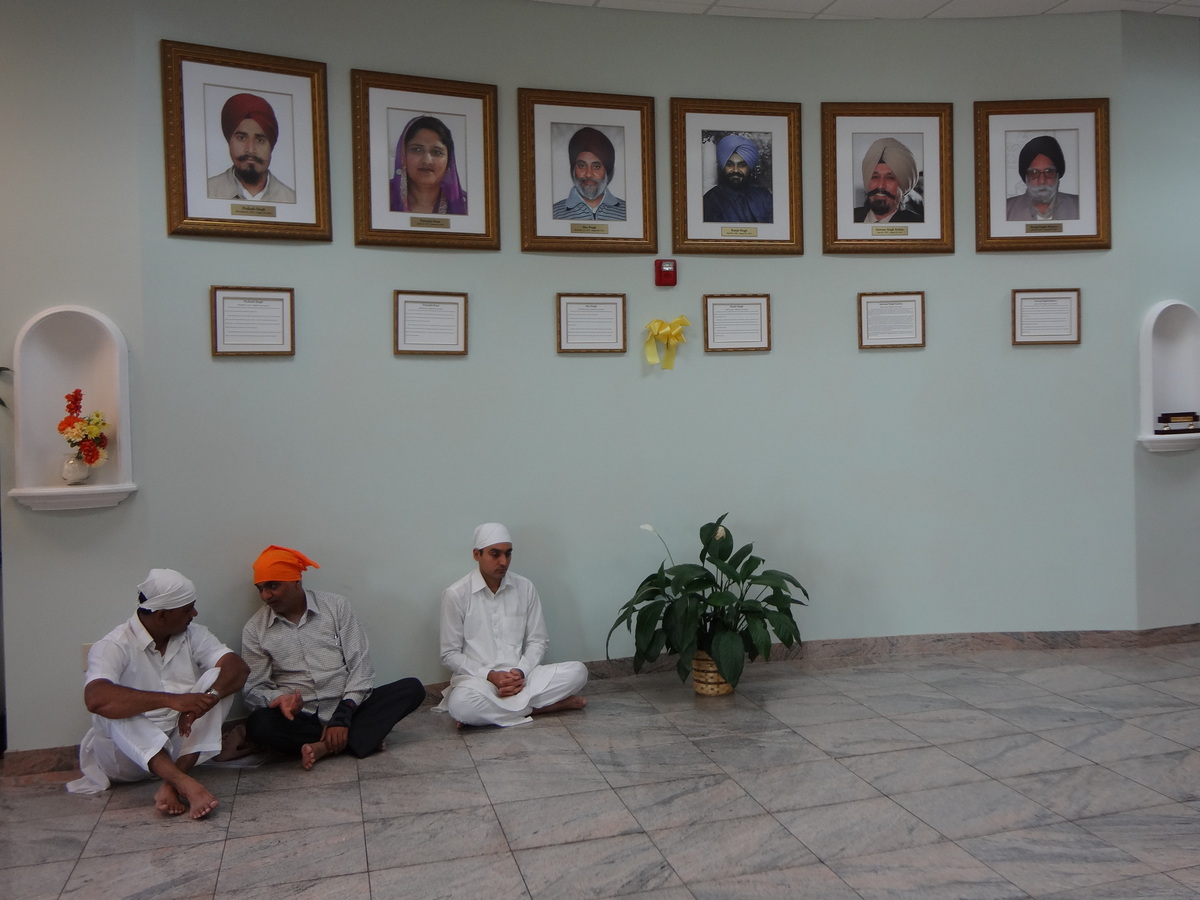 Framed photos of the six shooting victims of last August's shooting hang in the temple lobby.

While some worshippers remain fearful of violence, others seem even more determined to confront prejudice against their faith, like Kanwardeep Singh Kaleka. He looks down at a string of orange prayer beads around his wrist, as he sings a traditional Sikh prayer.

"So it's a very simple mantra," he says, "and really the basis is that if you can even just say God's name, or keep God in your mind, that will help you become one with God."

The prayer is one Kaleka's uncle used to sing at the end of Sunday services. His uncle was Satwant Singh Kaleka, the temple president who was killed while trying to fend off the gunman. Today, Kanwardeep Singh Kaleka works at the Medical College of Wisconsin, where he just earned a Ph.D. in Alzheimer's disease research.

The 30-year-old Kaleka started wearing the prayer beads after the temple shooting last year. He also let his beard and hair grow long, and now wears a turban in his daily life, as do most observant Sikh men.

"People who died in that shooting looked different," Kaleka says, "and I found this as a valuable opportunity to show the world that no matter how different anybody looks, that we're just as much of a human being. And in America, we're just as American as anyone else."

While much of the reaction to his long beard and turban has been positive, Kaleka says some still look on with fear, especially at airports.

"I got to the gate, and there was this young kid," Kaleka says, "and he just looks at me in absolute terror. He says, 'Don't kill me, don't kill me!' "

That was actually a great moment, Kaleka says, because he was able to explain who he was and assure the family they had nothing to worry about.

"By the time our plane landed, like, me and that kid were high-fiving and hugging," Kaleka says, "and that's sort of the notion that for me, is what it's all about."