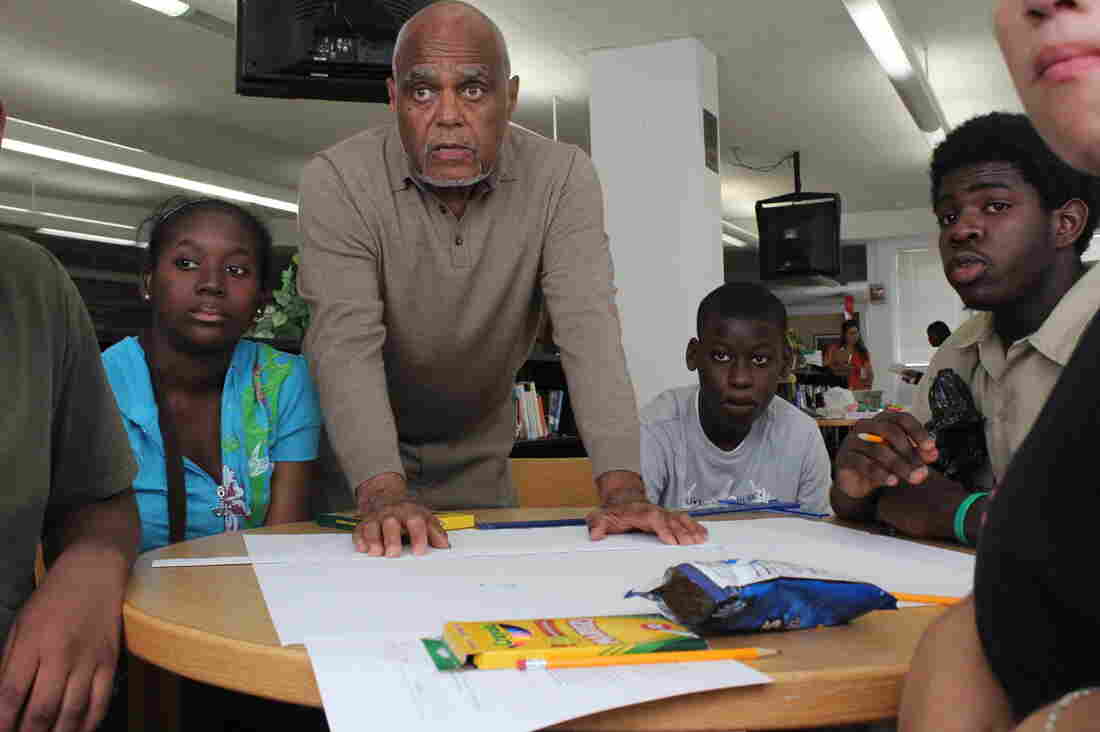 Bob Moses works with Jennifer Augustine, Guitoscard Denize, Darius Collins and other students who are part of this Algebra Project classroom. It's one of several student cohorts across the country where students who've struggled with math get to college-level by the end of high school. Christopher Connelly/NPR hide caption 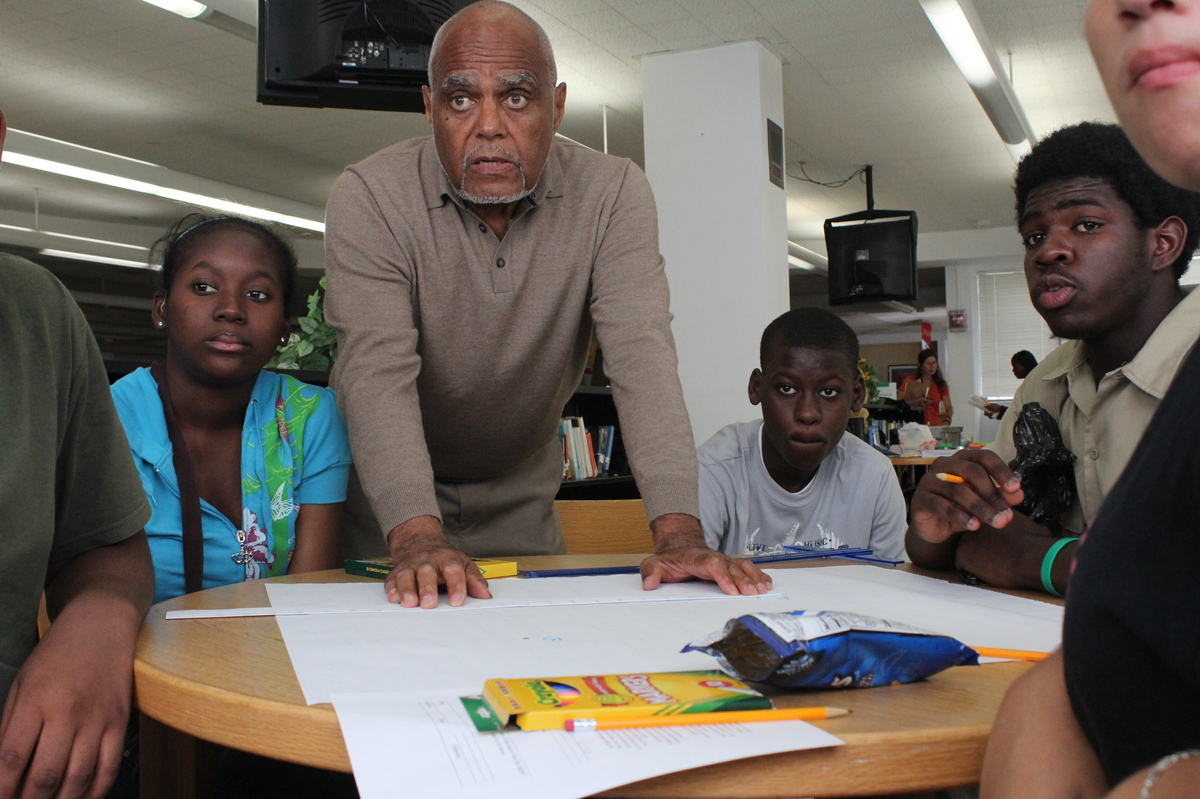 Bob Moses works with Jennifer Augustine, Guitoscard Denize, Darius Collins and other students who are part of this Algebra Project classroom. It's one of several student cohorts across the country where students who've struggled with math get to college-level by the end of high school.

Bob Moses is 78, but he has the same probing eyes you see behind thick black glasses in photos from 50 years ago when he worked as a civil rights activist in Mississippi. The son of a janitor, Moses was born and raised in Harlem. He's a Harvard-trained philosopher and a veteran teacher.

He started a math training program — the Algebra Project — with a MacArthur "Genius Grant" 30 years ago. The goal is simple: Take students who score the worst on state math tests, double up on the subject for four years and get them ready to do college-level math by the end of high school.

Where many teachers want students to work quietly and individually with pencil and paper, Moses encourages students to talk through tricky concepts because he says being conversational in math is a key to understanding it.

Moses says the U.S. is failing to adequately fund the teaching of math. He says it shows in the kids he works with, many of whom have given up on math after doing poorly on state tests but also in the huge number of kids around the country who need remedial math courses in college. So he expects a lot from these students — commitment, extra summer lessons and engagement — but he's gentle with them.

"It gave me another way of looking at math," says Charlene Delanois, who graduated in 2010 from an Algebra Project class in the Liberty City neighborhood of Miami.

She says she hated math when she started, though now she's helping teach the subject to this summer's class. Delanois studies nursing, the first in her family to go to college.

She still remembers the moment, a few years ago, when she was taking a test and realized that algebra had clicked for her.

"This equation came up, and I'm like, 'Oh my gosh, this is the same equation we've been doing!' It just wasn't in the same format," she recalled. "I was like, 'Oh, I know this, I know this!' and I figured it out, I was so proud of myself." 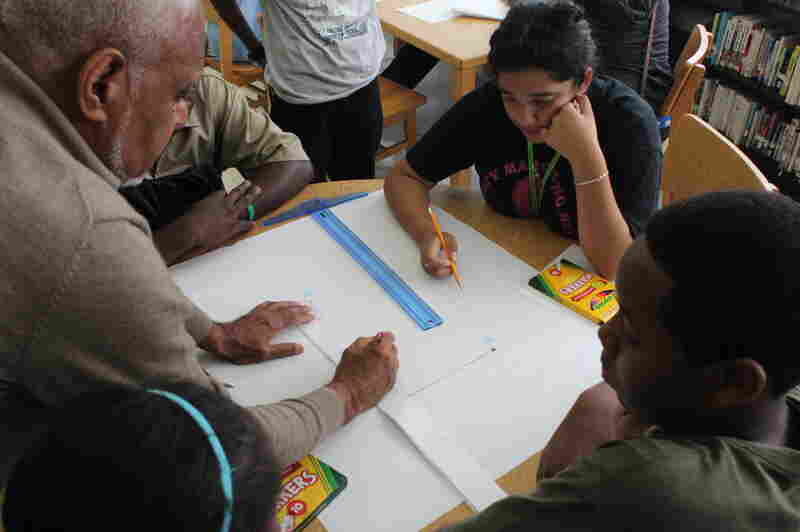 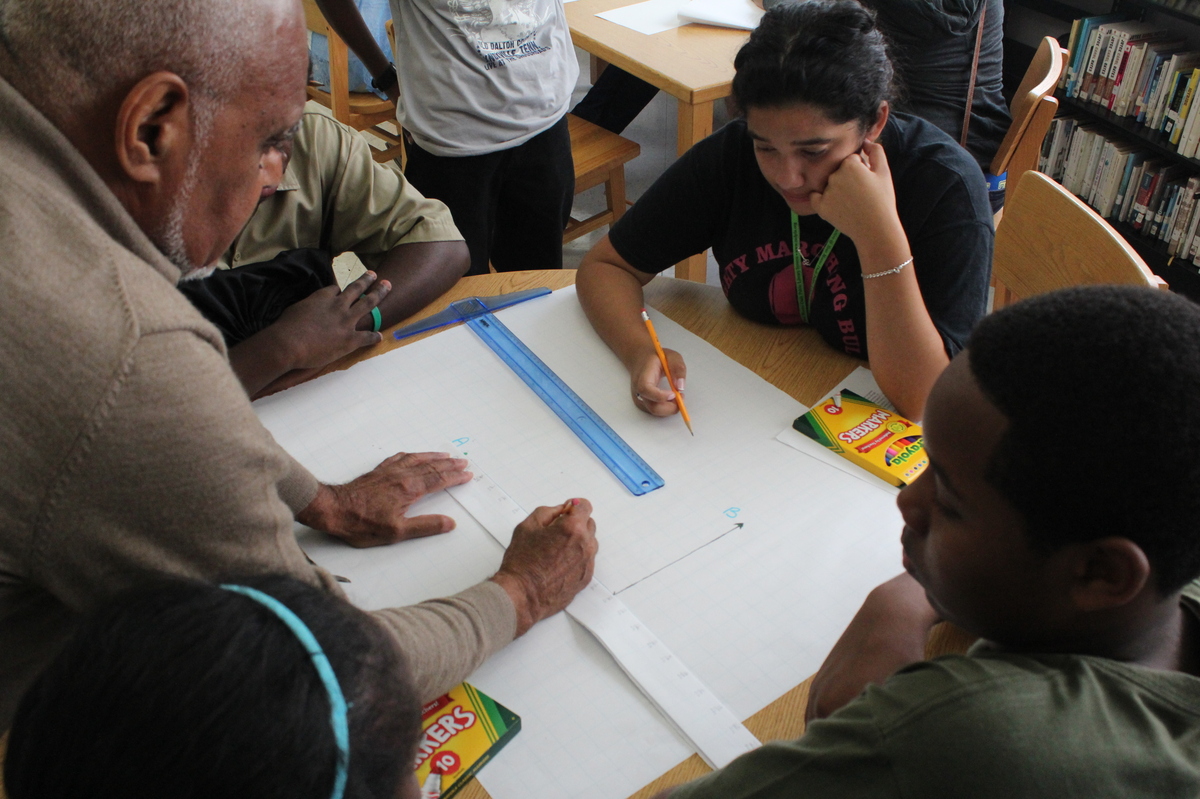 Moses shows students how to measure slopes using a ruler made by the students. His Algebra Project classroom model uses a lot of hands-on tools to help kids make math less abstract.

Moses says this newfound competence is more than just empowering. It's how these kids can avoid being second-class citizens when they finish high school, destined for low-wage, low-skill work on the second tier of an Information Age economy.

"Education is still basically Jim Crow as far as the kids who are in the bottom economic strata of the country," Moses says. "No one knows about them, no one cares about them."

It's exactly this inequality in the education system — based more on class than race — that makes this work as important as the work he did 50 years ago, he says.

A Northerner In The South

Moses spent the early '60s working for the Student Nonviolent Coordinating Committee in Mississippi. At the time, the group was struggling to make headway in the state. They faced a largely poor and rural black population who lived in terror of well-organized and often brutal white supremacists.

But by 1963 things were changing. Starting that spring, Moses had sharecroppers in the Delta town of Greenwood lining up at the county courthouse, every day, to try to register to vote. After one march through town, facing down police with dogs, Moses and a handful of others were arrested and charged with disorderly conduct.

The ensuing trial was a spectacle. Moses remembers the courtroom packed with supporters bused in to witness.

"I'm on the witness stand, and [Federal District Judge Claude Clayton] looks at me and he says, 'Why are you taking illiterates down to register to vote?'" Moses recalls. "Basically we said, 'Well, look, the country can't have its cake and eat it, too. It can't have denied a whole people access to literacy and then turn around and deny people access to voting.'"

Taylor Branch, a leading historian of the civil rights era, says Moses' Northern roots, quiet demeanor and philosophical training made him different from many of the movement's decidedly Southern and evangelical leaders.

"He spoke quietly, he didn't give big sermons like Martin Luther King," Branch says. "He didn't seek out dramatic confrontations like the Freedom Riders and the sit-ins, but he did inspire a broad range of grassroots leadership."

Branch says Moses was self-effacing, observant and sensitive. He says Moses went south to serve Mississippi's sharecroppers and ended up a leader by helping to push voter registration to the center of civil rights work.

"To this day he is a startling paradox," Branch says. "I think his influence is almost on par with Martin Luther King, and yet he's almost totally unknown."

A year after Greenwood, Moses helped line up African-American candidates to run for state office in shadow elections with the Mississippi Freedom Democratic Party, which aimed to prove that African-Americans were not at all apathetic about voting. He also spearheaded Freedom Summer, which brought white students from elite Northern colleges south.

But movement progress meant increased danger. Moses was shot at and threatened. Workers were jailed and surveilled. Some were killed.

"Moses was very sensitive to the notion that people were dying by following his example," Branch says. "And that led to the point where after Freedom Summer, he dropped out of the movement." 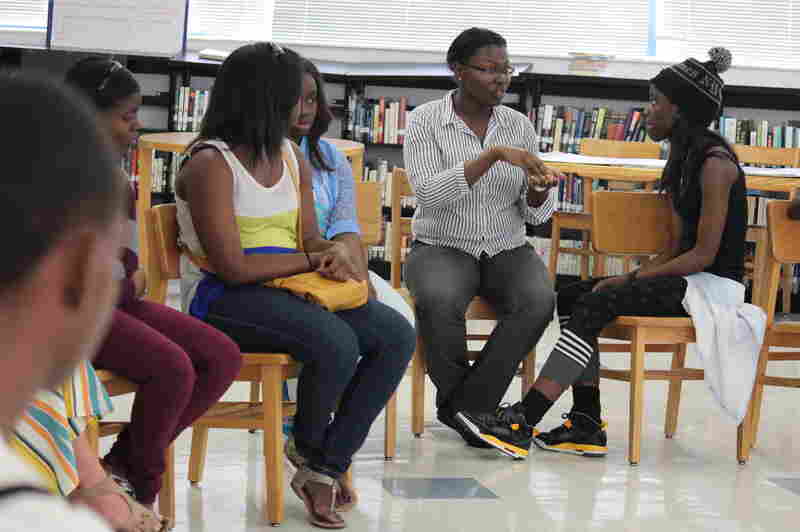 Rose Pierre, the regular classroom teacher who works with the students year round, talks with student Tanavia Thompson at the end of the day. Moses is working with the students on a summer intensive. Christopher Connelly/NPR hide caption 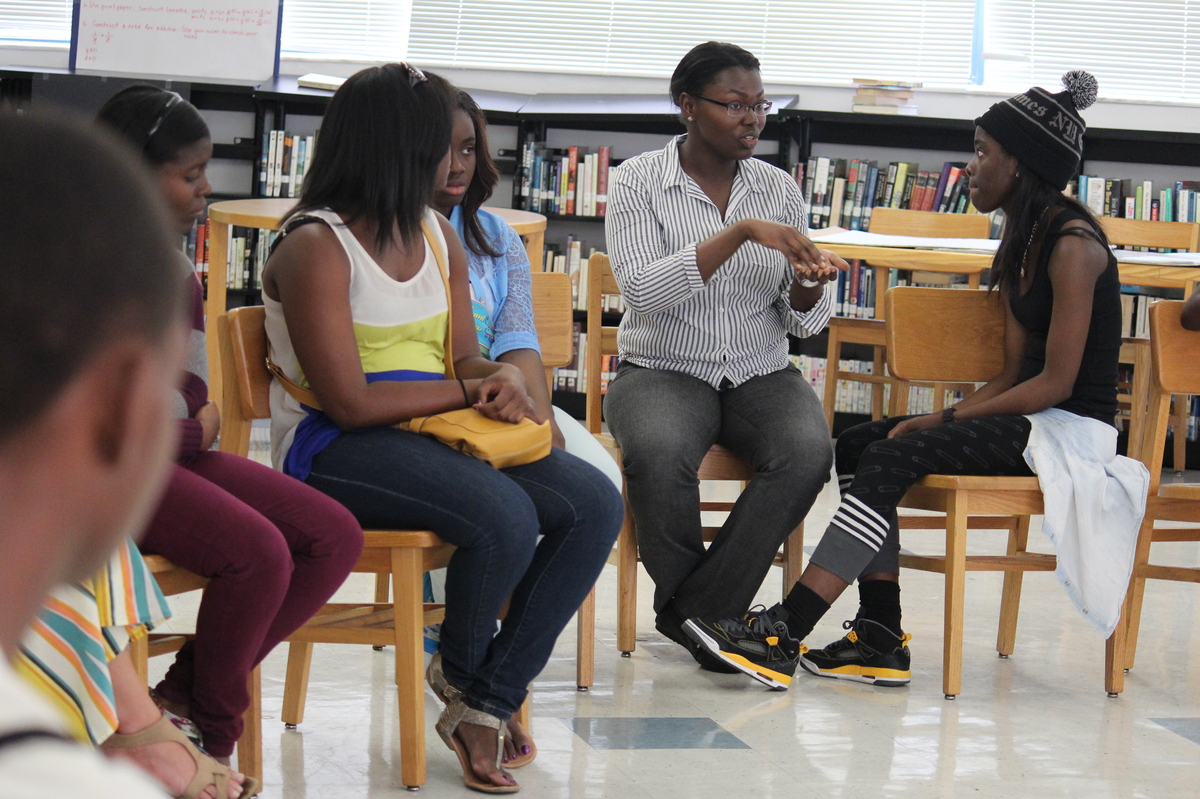 Moses went to Canada to avoid the draft in 1965, and then on to Tanzania, where he taught math for the better part of a decade. He returned to the U.S. in the late 1970s to finish his graduate studies at Harvard.

In 1982, he launched the Algebra Project. His first high school was in Jackson, Miss. Now, three decades later, the Algebra Project has been in hundreds of classrooms across the country. The summer class he's teaching in Miami is his second cohort in the city.

Training The Next Generation Of Changemakers

It's the end of the day in the library at Miami Northwestern High School. The students are sitting in a big circle, talking through the day with their regular classroom teacher. Moses munches on sunflower seeds. He's clearly as comfortable listening as he is talking.

One student wants to know why what she's learning doesn't look like the stuff on Florida's standardized math test. It's a question Moses hears all the time. So he jumps in, reassuring her that in the long run, standardized tests aren't what matter.

"What counts is when you leave this high school you are ready to do college math for college credit — that's what counts," he says emphatically. "Trust me."

The struggles of the '60s can seem far away today, but Moses infuses some of that history, his history, into this work.

Just a couple blocks from Miami Northwestern is a short, nondescript wall, painted yellow. It's what's left of an infamous "segregation" wall built in 1939 to divide black and white neighborhoods.

Many of his students walk by it every day but few knew its place in Miami's difficult racial history until they met Moses.

Standing in front of this relic of the past, he says he's hopeful about the future.

"I've lived most of my life," Moses says. "What I would like to see happen in this country in my lifetime is the next generation get ready to launch the next lurch forward."

That next lurch forward, he says, is that every child in the country can get a quality public education and that the nation's promise of freedom continues to grow.