Accessibility links
How I Learned To Swear In Cuban : Code Switch A foul-mouthed, politically incorrect comedian served as a cultural guide for generations of Cuban-Americans. Code Switch celebrates the life and bad words of Guillermo Álvarez Guedes. 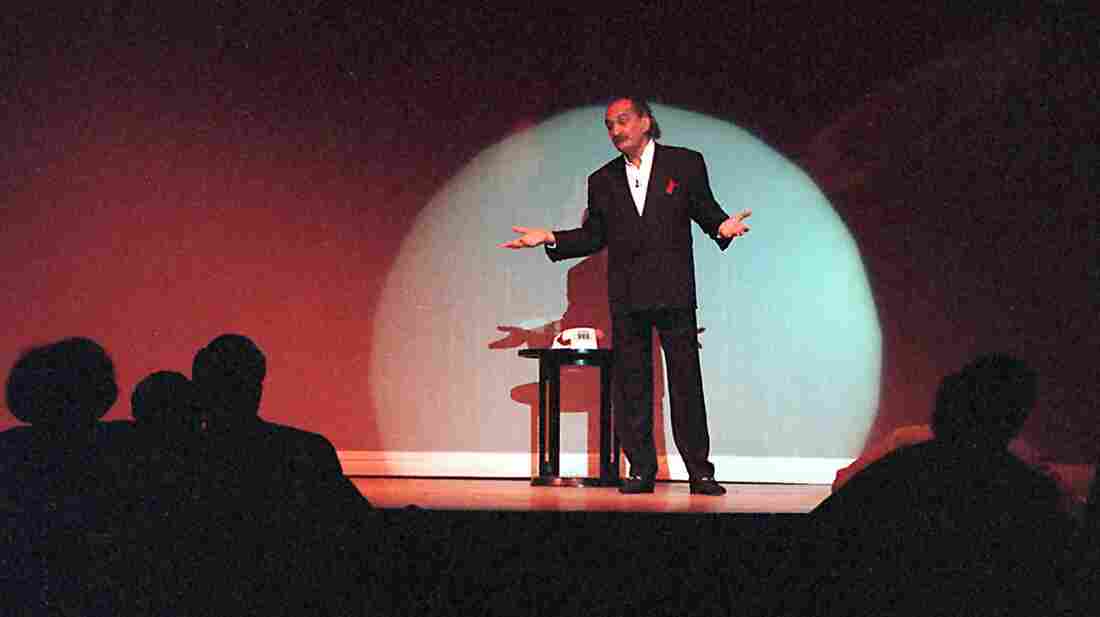 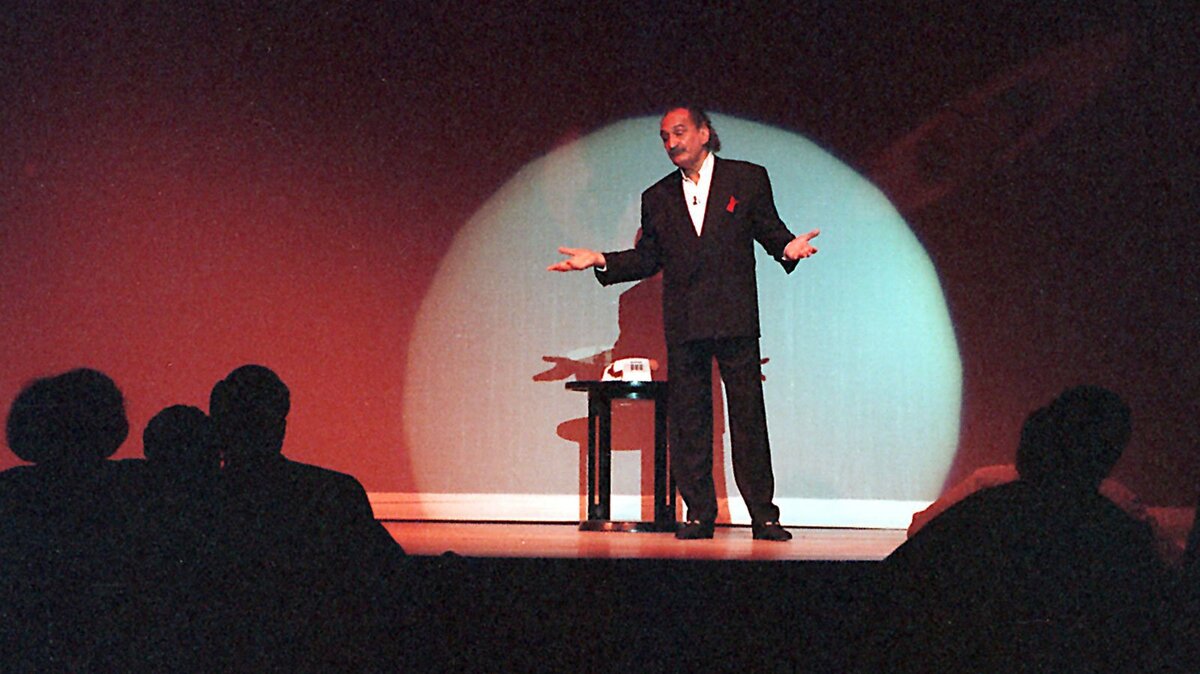 Guillermo Ãlvarez Guedes, the Cuban comic who made a common Cuban expletive his trademark, died last week in Miami at age 86.

Editor's note: Fair warning — this essay is, in part, about Spanish profanities, and it includes several.

The man who taught me to swear in Cuban died last week.

Guillermo Álvarez Guedes was a foul-mouthed comedian who filled 32 albums with politically incorrect jokes. Álvarez Guedes combined Jackie Mason's self-deprecating humor with the deadpan delivery of Stephen Colbert. Unlike Colbert, Álvarez Guedes didn't just play a conservative on TV. In the '80s, he traveled to Central America to entertain the Contras. The Cuban comedian was a staunch anti-communist, and for half a century he told virulently anti-Castro jokes.

Miami's Cuban exile community loved Álvarez Guedes because they agreed with his politics and couldn't help but laugh at his jokes. They relished his masterful use of Cuban obscenities. He was an important figure, though, for an altogether different reason: Guillermo Álvarez Guedes helped Cuban immigrants and their U.S.-born children make sense of the world and their place in it.

"Carajo," "comemierda" y "coño" were the profane triumvirate of malas palabras (bad words) that drove the humor of Álvarez Guedes.

He was best known for his signature use of "coño." In his one English-language album, the comedian describes "coño" as a sort of force multiplier for any phrase.

Cue Cuban laughter. The punch line doesn't make any sense unless you speak Spanish and can therefore appreciate that he was absolutely 100 percent right.

Later, in that same routine, he goes on to say "['coño'] is so strong ... you don't even have to say the whole word. With half of it you express everything you want." He was extolling the virtues of using just the last syllable — "ño" — to convey anger, appreciation or surprise. He offered audiences a Homeric catalog of the different meanings and uses of "ño." It was his calling card.

The only English-language parallel I can draw is the character of Clay Davis in The Wire and his use of "sheeee-it" or Samuel Jackson swearing in his recording of Go the F**k to Sleep. However, Jackson requires four letters to achieve the depth of emotion and passion that took Álvarez Guedes only two letters — ñ and o.

Álvarez Guedes' Cuban accent was most pronounced when he swore. It is almost as if he concentrated all the force of his cubanidad on saying "carajo," "comemierda," and "coño."

You can hear for yourself in this video what he had to say about "carajo" and "comemierda."

The video is NSFW, if your colleagues or boss speak Spanish. Good luck making sense of the jokes, if you don't understand Spanish. We can discuss particulars in the comments, if you like.

I don't remember many of Álvarez Guedes' jokes being raunchy a la Redd Foxx. But Álvarez Guedes certainly told many jokes at the expense of gays and used "maricón," an anti-gay slur, as a punch line. (Listen to some of his jokes now, and it is impossible to avoid a clear impression of homophobia.) By Cuban standards 30 years ago, his jokes were PG-13.

I must have been close to 13 years old when my prim, proper and judgmental mother from Camagüey would sit and listen to his recordings with me. She would laugh. I'd ask for explanations. At the time, I struggled to follow the Cuban slang. (This was the stage of my youth when she would talk to me in Spanish and I would respond in English.) Listening together to Álvarez Guedes was one way to transmit Cuban culture in the form of humor that a young teenage boy could embrace.

Michigan State University linguist Gabriela Alfaraz had a similar experience. She grew up far from Miami, and her family home served as a de facto hub for Cubans in western Michigan. Alfaraz remembers sitting with her parents and their Cuban friends. "We all listened to Álvarez Guedes swear up a storm. It was funny. At some deep level, he made being Cuban cool ... way cool for those of us who didn't have access to Cuban culture." Alfaraz has shared the same recordings with her teenage son and says, "It is humor, it is not really profanity. It is not offensive, and it is OK. And it was OK to laugh."

According to University of Buffalo linguistics professor Jorge Guitart, Alvarez Guedes' implicit message to his audience was, "You can't be free in Cuba, but you can be free here in America and say 'F - - - you.'" It was foul language in the service of binding Cubans in exile more closely together. It was profane, but much of it was not crass.

A "cultural revolutionary" is how University of Pennsylvania professor Román de la Campa describes Álvarez Guedes. It's a label Álvarez Guedes would have likely hated given his feelings about the Cuban Revolution. But, it is accurate.

He was the first mainstream Cuban comic to incorporate profanity. His jokes, de la Campa says, were structured like short stories. "He made the audience think about the challenges associated with being in between two cultures and two languages," says de la Campa. A challenge that was as real for Álvarez Guedes himself as it was for every member of his Cuban audience in Miami — including me.

Guillermo Álvarez Guedes was a genius at code-switching between American culture and Cuban culture. He toggled masterfully between Spanish and English in midjoke. Of his many albums, my favorite was his 14th recording, the aforementioned How to Defend Yourself From the Cubans. The jokes are told in both languages, but the punch line was generally in Spanish and only easily understood within a Latin cultural context. After all, he wasn't really trying to communicate with an American audience. This was not an attempt at some kind of crossover act. In fact, an English-only listener would probably be baffled. (You can look up "Guillermo Álvarez Guedes 14" on iTunes and listen for yourself.)

In order to appreciate How to Defend Yourself From the Cubans, you had to be bilingual and Cuban, and know and understand Cuban Miami. And make no mistake: At the time there was a Cuban Miami, a black Miami, an Anglo Miami and a Haitian Miami. Each of the four groups kept to themselves, and each felt themselves, with varying degrees of accuracy, to be the victims of discrimination by every other group.

How to Defend Yourself From the Cubans was his best-selling album because it struck a chord with the Cuban exile community, which felt itself under attack at the time. Much to my mother's disappointment, a popular bumper sticker at the time read, "Will the last American to leave Miami please take the flag with him?" The Mariel boatlift was still a very recent phenomenon, and Miami suffered from a record homicide rate so high the city had to rent refrigerated container trucks to store the overflow of bodies.

The murders were the result, mostly, of the raging drug trade. This is the cocaine era captured in the Al Pacino movie Scarface. Deborah Harry's "Rush Rush" provided the background soundtrack to the rampant cocaine trafficking. The wars in Central America raged and hopes soared in Miami that President Ronald Reagan was going to displace communism from Latin America, in general, and Cuba, in particular. Throughout my youth, but especially then, I remember hearing the New Year's Eve toast "Next year in Havana" being said with great conviction.

Cubans were not yet a dominant political force. The local Univision station used to run a public service announcement that said, "Vota para que the respeten." (Vote, in order to be respected.) And into this milieu, How to Defend Yourself From the Cubans landed like balm for the exile soul. Ostensibly, the album was made in order to help Americanos learn crucial bits of Cuban Spanish in order to defend themselves and avoid being overrun by the overwhelming Cuban presence in Miami. But its real purpose was to help Cubans understand how they were perceived by other groups and to help shore up their cubanidad.

Álvarez Guedes turned life on the Cuban-American hyphen into a source of laughter and celebration rather than angst and sadness. De la Campa says he gave meaning to the lives of those navigating between two languages and two cultures. The comedian was a tangible reminder to Cubans that they had a worthy culture and a crazy playful relationship with language — a reminder that came at a time when Cubans in Miami did not enjoy a positive image.

There were many individuals and institutions in Miami that made sure I and others of my generation never forgot our island roots. My mother and the local, Spanish-language media outlets repeated that same message over and over. Ensuring that I embraced my American civic responsibilities was a message hammered home at my Jesuit high school and by others in Miami and elsewhere in the country. But through his humor, Álvarez Guedes was conveying a message distinct from every other one I was hearing.

Álvarez Guedes embodied the one trait that every self-respecting Cuban aspires to possess than anything else — simpático. ("It leads us astray," says Alfaraz.) Savvy. Quick-witted. Think Desi Arnaz as Ricky Ricardo. The kind of guy that makes you break out into a smile from 10 feet away because you know a good laugh is not far behind. The kind of guy that can easily dance back and forth between the Cuban and American cultures. El fulano that enjoys a relaxed and easygoing fluency in English and Spanish. Álvarez Guedes updated the model of simpático for life in exile.

Álvarez Guedes embodied a certain ideal of Cuban-Americanness defined by humor and mixed with cultural and linguistic fluency punctuated with profanity. After all, it is not hard to imagine why a community forced into exile for its political beliefs and separated from their homeland by a lousy 90 miles might have reason to curse aloud — carajo, comemierda and coño.

The man who taught me how to swear in Cuban died last week, and all I can say is ño. Plain ño.