Accessibility links
Killed For Taking Part In 'Everybody's Fight' : Code Switch Sally Liuzzo-Prado was just 6 when her mother, Viola Liuzzo, was killed by Ku Klux Klansmen following marches in Alabama. The death of Liuzzo, the only white woman protester to die during the civil rights movement, captured the nation.

For the past few months, NPR has been commemorating the monumental summer of 1963 by looking at watershed moments in the civil rights movement. In this three-part series, Karen Grigsby Bates talks with the children of civil rights leaders who lost their lives in the battle for racial equality. 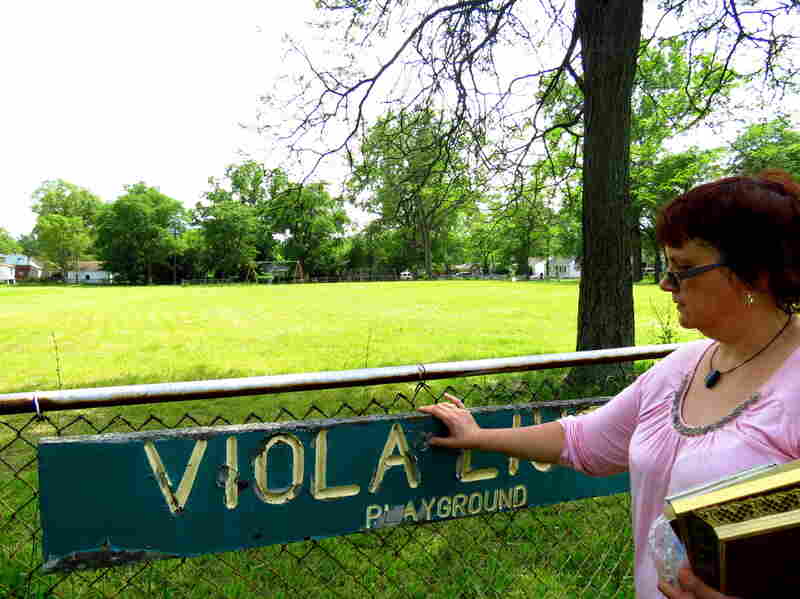 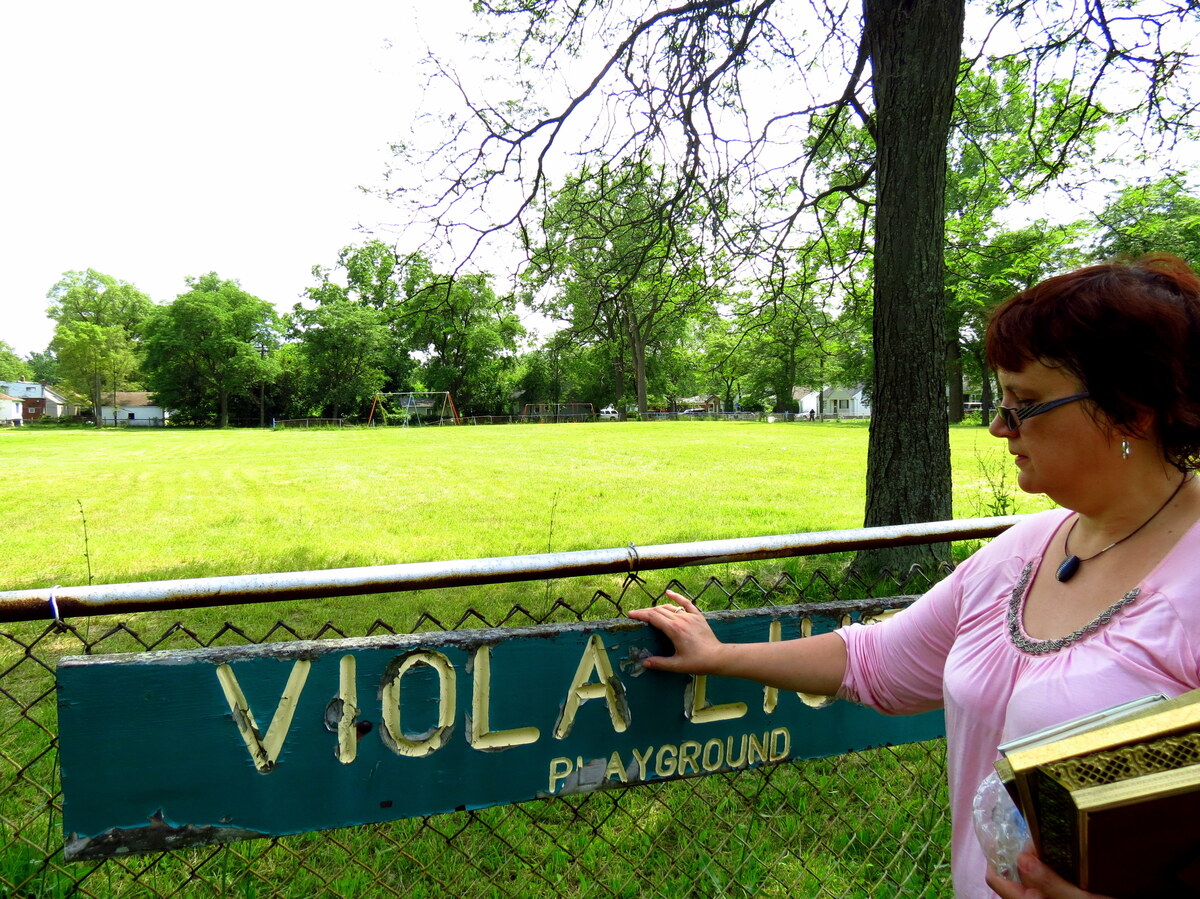 Sally Liuzzo-Prado stands in a park dedicated to her mother, Viola Liuzzo, a civil rights activist who was killed in Alabama.

In an obscure corner of Detroit, there's a battered playground honoring a civil rights martyr. It has an overgrown baseball field, some missing swings and on a broken fence, a worn, wooden sign.

"It's all tore up and definitely could use at least a paint job," says Sally Liuzzo-Prado. She is referring to the sign with her mother's name on it.

Liuzzo-Prado was 6 when her mother, Viola Liuzzo, was killed by Ku Klux Klan members following a voting rights march in Alabama in 1965. Liuzzo was the only white female protester to die in the civil rights movement.

The housewife and mother of five had been an active NAACP member in Detroit and was horrified at the violence she saw inflicted upon black protesters on television. So when she heard of a four-day, 54-mile walk from Selma to Montgomery, Ala., to support voting rights, she packed a bag. Liuzzo told her husband: "It's everybody's fight." She kissed her children goodbye and began the drive south.

"She called us every night. I learned how to cursive write and she was so excited. She told me to write my name and put it on her dresser and she'd see it when she got home," says Liuzzo-Prado.

Led by the Rev. Martin Luther King Jr., Viola Liuzzo and thousands of other marchers walked to Montgomery, where King spoke on the Capitol steps, telling the crowd that freedom was imminent: 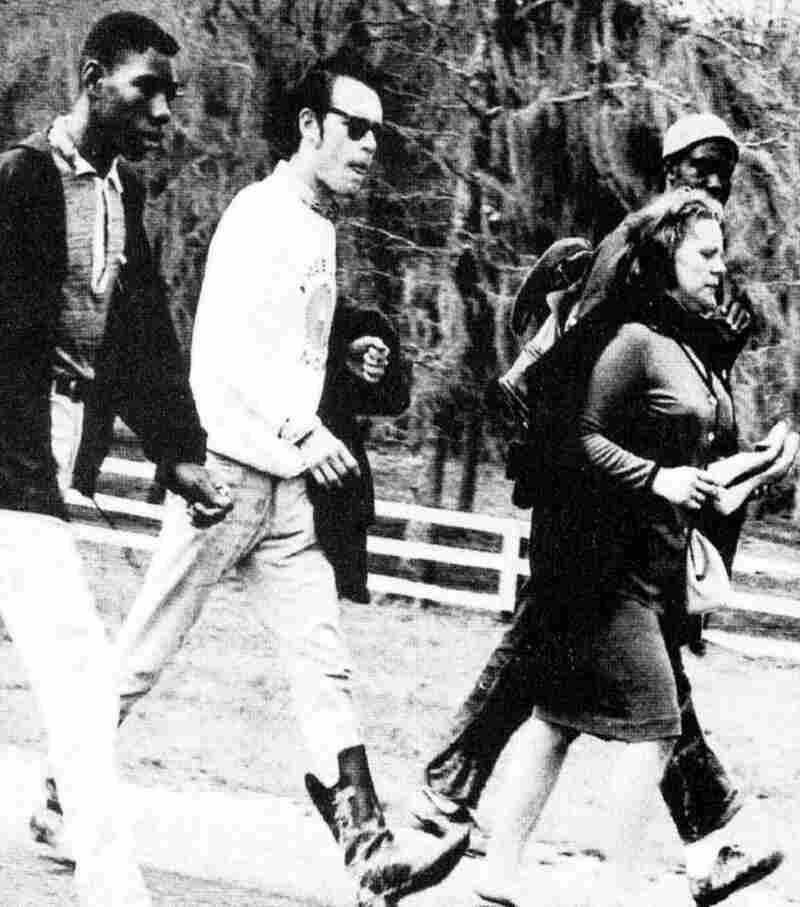 Viola Liuzzo carries her shoes while walking with other civil rights activist before she was shot and killed in Alabama. Liuzzo-Prado says her mother walked barefoot whenever she could. "She just hated shoes." When her body was removed from the car she was shot in, she was barefoot. Courtesy of the Liuzzo family hide caption 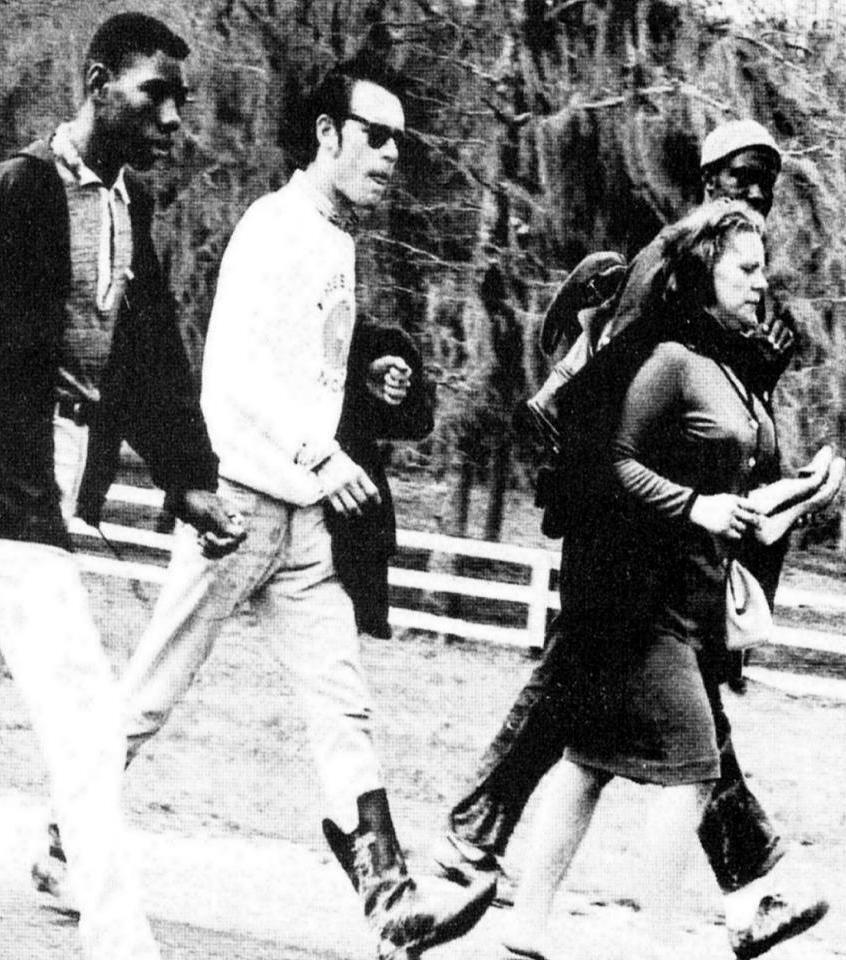 Viola Liuzzo carries her shoes while walking with other civil rights activist before she was shot and killed in Alabama. Liuzzo-Prado says her mother walked barefoot whenever she could. "She just hated shoes." When her body was removed from the car she was shot in, she was barefoot.

Courtesy of the Liuzzo family

That night, Liuzzo, tired but exhilarated, shuttled local marchers back to their homes. A car filled with Ku Klux Klan members tried to force her off the road. Finally, they pulled alongside Liuzzo's car and shot her in her head. The 39-year-old died instantly.

King attended Liuzzo's funeral and comforted her family, but not everyone agreed that she was a hero. A group of people tried to break down the Liuzzos' door, and a cross was burned on their lawn. What Sally Liuzzo-Prado remembers most vividly is the morning she returned to first grade after her mother's death.

She was wearing her saddle shoes, which her older sister, Penny, had polished.

"It was pouring rain that day. And I looked down at my saddle shoes and the white polish was coming off," she says. "These people — grown-ups — lined the street and were throwing rocks at me, calling me 'N-lover's baby.' I didn't know what that meant. I thought it was because of my shoes."

Anthony Liuzzo, a Teamsters union official, withdrew his daughter from the school and had her transferred. For years, he drove her to and from school every day. Liuzzo-Prado says her father also hired two armed guards to watch their house day and night for two years.

Then, there were the rumors: After Viola Liuzzo's death, there were newspaper reports that Liuzzo had gone south to meet and have sex with black men. Another rumor claimed she was a drug addict. And the July 1965 issue of The Ladies' Home Journal published a poll that asked if readers thought Liuzzo was a good mother. Fifty-five percent didn't. ("I feel sorry for what happened," said one woman in a focus group convened to talk about the Liuzzo story, "but I feel she should have stayed home and minded her own business.")

The family couldn't figure out why anyone would say such things. Then, when the Klansmen were put on trial for Liuzzo's death, they learned that a key witness was a paid FBI informant who had been in the Klansmen's car. Years later, the family sought to have Liuzzo's FBI file opened. They finally succeeded, and that's when they discovered that the rumors about her had come directly from J. Edgar Hoover. The family believes the FBI director was desperate to divert attention from the agency by smearing her.

The smears took an awful toll. Anthony Liuzzo became a heavy drinker and later died. The Liuzzo children all moved away. Sally Liuzzo-Prado, the youngest, was later diagnosed with post-traumatic stress disorder and anxiety. But two years ago, Liuzzo-Prado elected to return to her hometown. 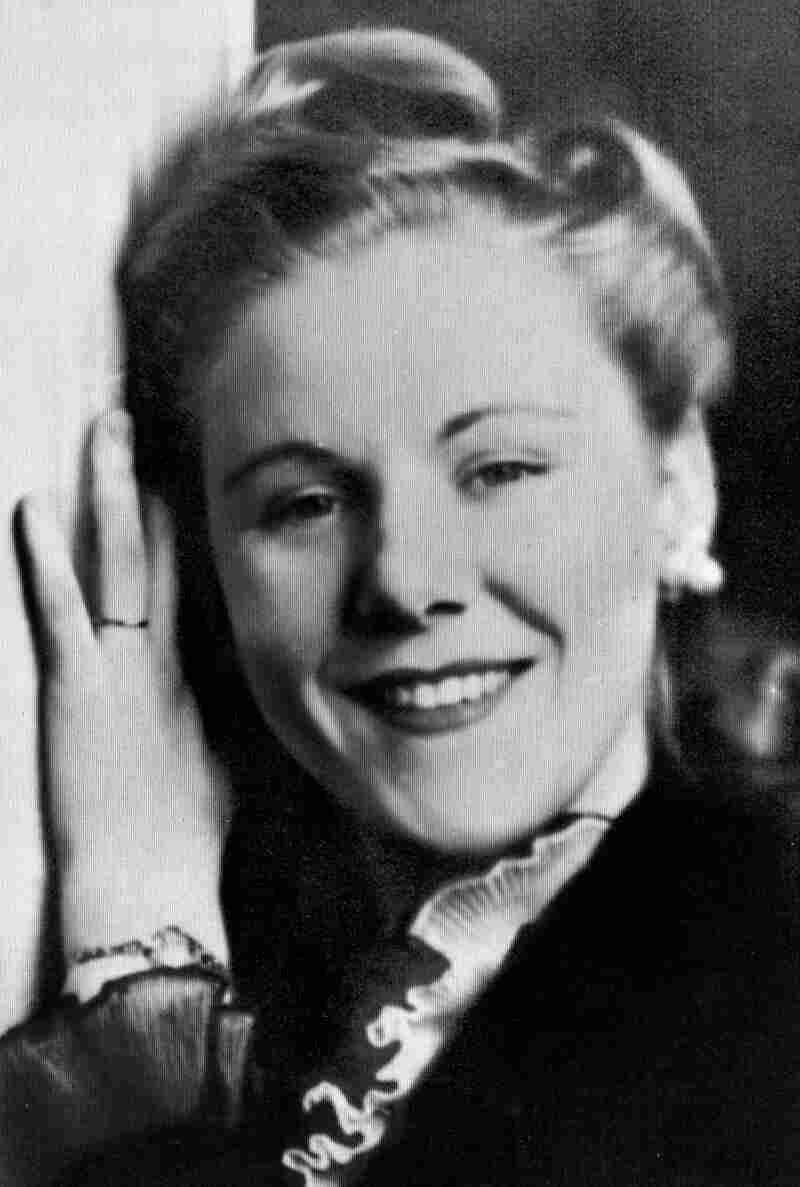 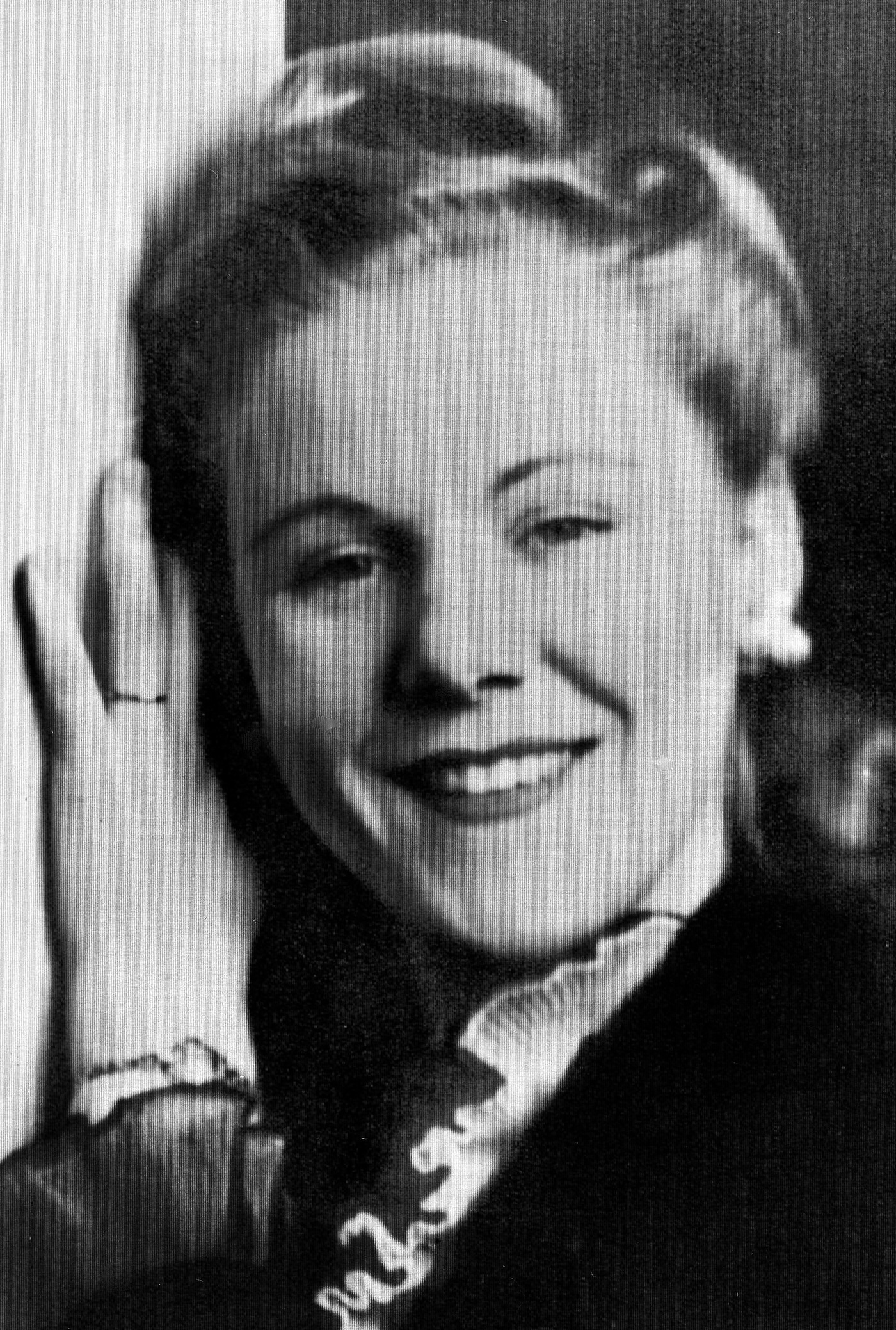 "The older I got, the more I realized there was a lot of work to be done in Detroit still," she says. "And, you know, it's not so much just for her to have recognition. It's to right the wrongs done to her by J. Edgar Hoover."

In May, Liuzzo-Prado accepted the Ford Freedom Humanitarian Award in her mother's name, an honor given only to one other person — Nelson Mandela. For Liuzzo-Prado, it was a deeply satisfying moment. But even more satisfying for her was a conversation she remembers having with another martyr's child — Martin Luther King III — when both attended the dedication of the Civil Rights Memorial in Montgomery.

"He pulled me aside, said, 'I wanted you to know something: 30 years ago, my dad couldn't be in this ballroom. And today you and I are here together, and it's because of your mother.' And I've never forgotten that."

Sally Liuzzo-Prado holds tight to that memory. She hopes that eventually, her mother will be honored with a new park in a more central place, so everyone can appreciate the Viola Liuzzo her family cherished. And she hopes there's a statue there, based on the last photo that was taken of her mother: It shows a determined woman, walking purposefully, shoes in hand.

The grandson of Viola Liuzzo, TJ Herrington, wrote music for a play, which was based on the family's recollections of Viola. The play is titled The Marker: Reflections of Viola Greg Liuzzo.