Accessibility links
Bayard Rustin: The Man Who Organized The March On Washington : Code Switch The strategist behind the 1963 march will posthumously receive the Presidential Medal of Freedom this year. As a gay man, his position in the movement was questioned. But now he is considered "an amazing role model" for activists of color who are also gay, lesbian, bisexual or transgender. 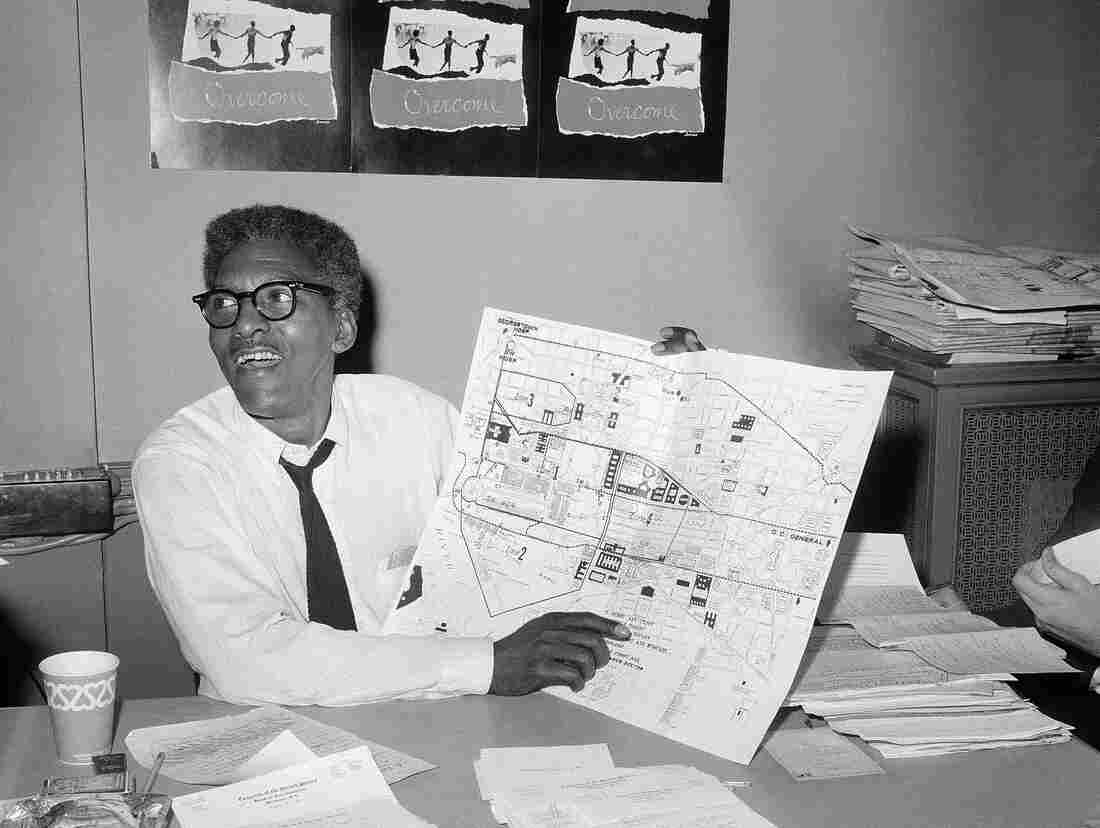 Activist Bayard Rustin points to a map during a press conference four days ahead of the March on Washington in August 1963. AP hide caption 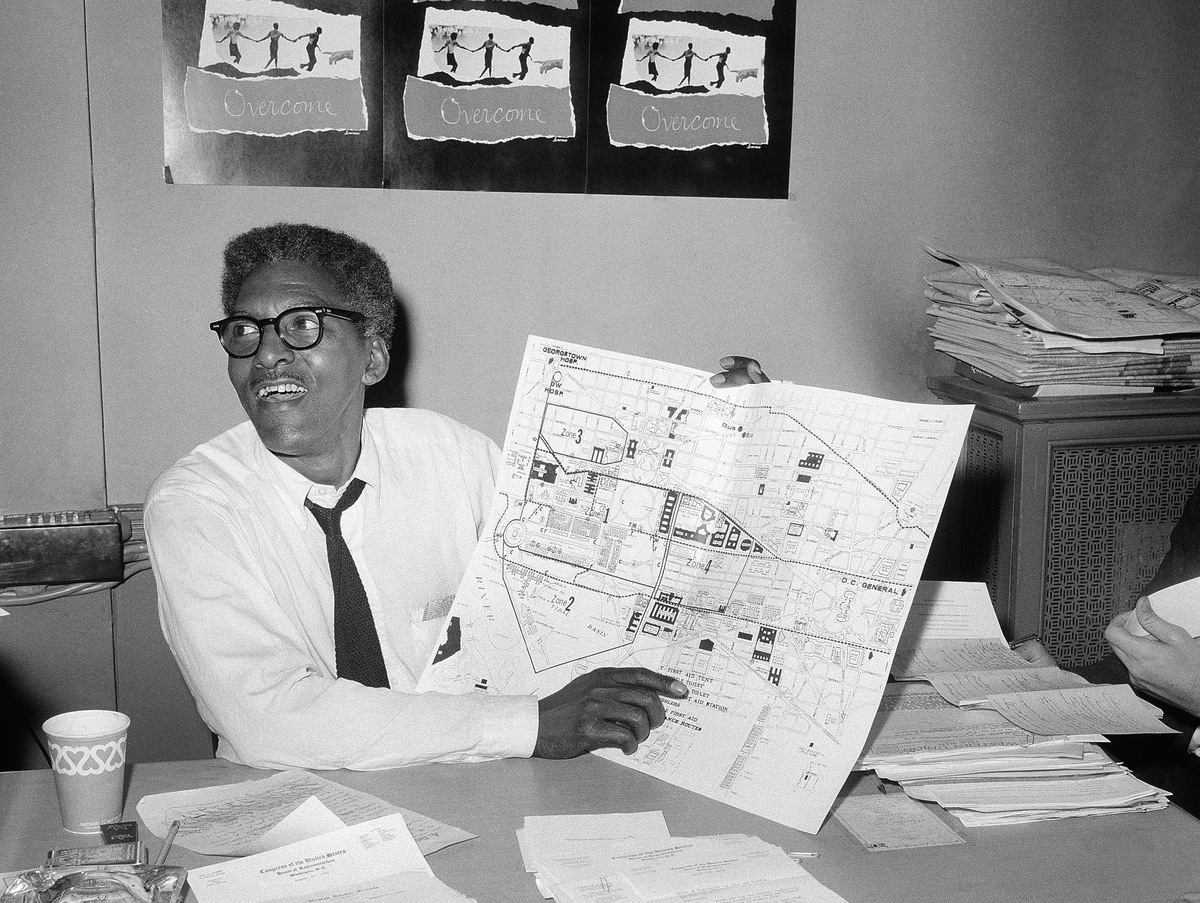 Activist Bayard Rustin points to a map during a press conference four days ahead of the March on Washington in August 1963.

The trailblazing strategist behind the 1963 March on Washington will this year be posthumously awarded the Presidential Medal of Freedom. That's a long way from the days when civil rights activists counted on Bayard Rustin's hard work, but tried to push him aside because he was gay.

For 60 years, Rustin fought for peace and equal rights — demonstrating, organizing and protesting in the United States and around the world.

In the summer of 1963, he was the main organizer of the March on Washington for Jobs and Freedom. On Aug. 28, speaker after speaker roused a crowd of 250,000, including the Rev. Martin Luther King Jr., with his seminal "I Have A Dream" speech.

Rustin had less than two months to organize what was the largest demonstration the country had ever seen.

"As we follow this form of mass action and strategic nonviolence," he said, "we will not only put pressure on the government, but we will put pressure on other groups which ought by their nature to be allied with us."

Del. Eleanor Holmes Norton, D-District of Columbia, was a law student in 1963 and a volunteer for the march. Rustin was her boss. "Bayard was one of a kind, and his talent was so enormous," she says.

"The great achievement of the March on Washington is that Rustin had to work from the ground up," Norton says. "There had been many marches from the South ... but calling people from all over the country to come to Washington, the capital of the United States, was unheard of."

Rustin grew up in West Chester, Pa. In college in the 1930s, he joined the Communist Youth League for a few years, attracted by the group's anti-racist efforts. He later embraced socialism.

He was a gay black man, tall, with high cheekbones, and a gifted singer. He played a bit part in a Broadway musical alongside Paul Robeson, and Rustin often sang for his audiences as he toured the country, conducting race-relations workshops.

Rustin was considered a master organizer, a political intellectual and a pacifist; he served time in prison for refusing to register for the draft. He created the first Freedom Rides, which challenged segregation on interstate buses. Along with King, Rustin was one of the founders of the Southern Christian Leadership Conference.

He had two strong mentors. A.J. Muste, the head of the pacifist organization the Fellowship of Reconciliation, hired Rustin as a youth secretary to conduct workshops and demonstrations against war and segregation. Rustin's other mentor was A. Philip Randolph, the head of the first predominantly black union, the Brotherhood of Sleeping Car Porters.

"What Rustin took away from Randolph, especially, is the recognition that economic issues and racial justice issues are completely intertwined," says his biographer, John D'Emilio. 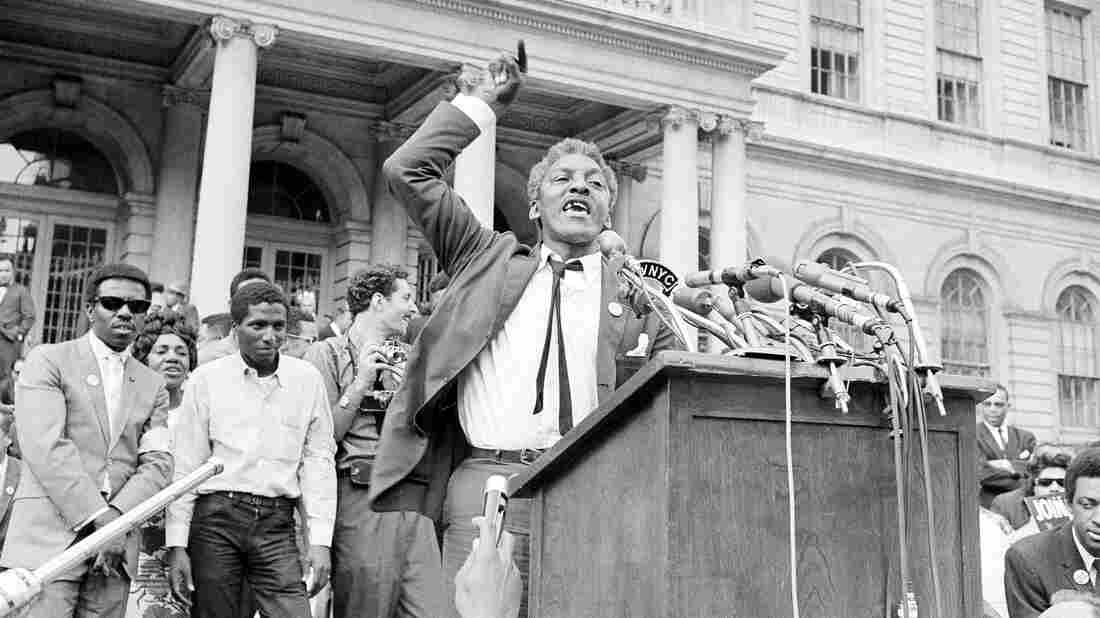 Bayard Rustin speaks in front of City Hall in New York on May 18, 1964, at a rally for school integration. AP hide caption 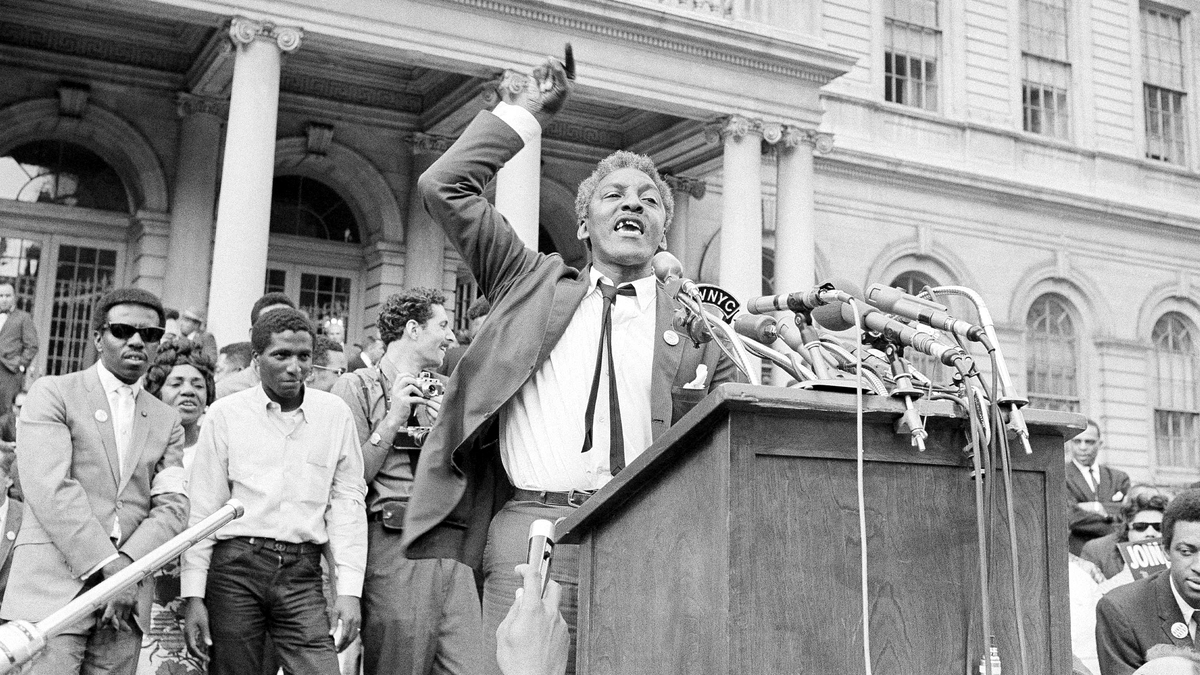 Bayard Rustin speaks in front of City Hall in New York on May 18, 1964, at a rally for school integration.

Despite his extensive involvement in the civil rights movement, Rustin was content to remain behind the scenes, D'Emilio says.

"I think of it as part of the Quaker heritage that he internalized. You don't push yourself forward," D'Emilio says. "It doesn't matter if you don't get the credit for it. What is important is this notion of speaking truth to power."

A Matter Of Orientation

In 1953, Rustin's homosexuality became a public problem after he was found having sex in a parked car with two men. He was arrested on a morals charge. Later, when he was chosen to organize the 1963 march, some civil rights activists objected. In an effort to discredit the march, segregationist Sen. Strom Thurmond took to the Senate floor, where he derided Rustin for being a communist, a draft dodger and a homosexual. Ironically, author D'Emilo says, it became a rallying point — for the civil rights leaders.

"Because no one could appear to be on the side of Strom Thurmond, he created, unwittingly, an opportunity for Rustin's sexuality to stop being an issue," he says.

The march was a success, and at its end, a triumphant Rustin stepped up to the microphone to read the demands that the leaders of the civil rights movement would take to President John F. Kennedy.

First on the list: "effective Civil Rights legislation — no compromise, no filibuster — and that it include public accommodations, decent housing, integrated education, [fair employment], and the right to vote."

Rustin wanted to move the civil rights agenda from protesting to politics and to work within the system — blacks and whites together — to create jobs and other opportunities. His effort fell flat, stymied by a more militant generation and the dominant issue of the times, the Vietnam War. Rustin said, "It has split the civil rights movement down the middle. It has caused many white people who were in it to say, 'That must wait now until we stop Vietnam.' "

In his later years, Rustin continued to speak out on a variety of fronts, and his personal life also changed: He met Walter Naegle.

Naegle, Rustin's surviving partner, says that in the final years of his life, Rustin became more involved in gay rights.

"He saw this as another challenge, another barrier that had to be broken down — a larger struggle for human rights and for individual freedoms," Neagle says.

Or, as Rustin put it:

"The barometer for judging the character of people in regards to human rights is now those who consider themselves gay, homosexual, lesbian. The judgment as to whether you can trust the future, the social advancement, depending on people, will be judged on where they come out on that question."

Activist Mandy Carter says Rustin was a visionary, understanding the parallels in the civil rights struggle and the gay rights movement. Carter is on the leadership council the National Black Justice Coalition, an LGBT civil rights group.

"For me and for a lot of us who are black, and gay and lesbian, bi, trans, who see ourselves as social justice advocates as well, to have this person — such an amazing role model," she says.

Carter says there was just no one like him, and she is delighted such a key individual in the civil rights movement is now being recognized with the nation's highest honor.