Accessibility links
50 Years Later, A March On Washington Among Generations : Code Switch Grandparents with grandchildren were among the tens of thousands gathered in front of the Lincoln Memorial Saturday to commemorate the 50th anniversary of the civil rights movement's March on Washington. The rally is among many events around the nation's capital over several days marking the historic march. 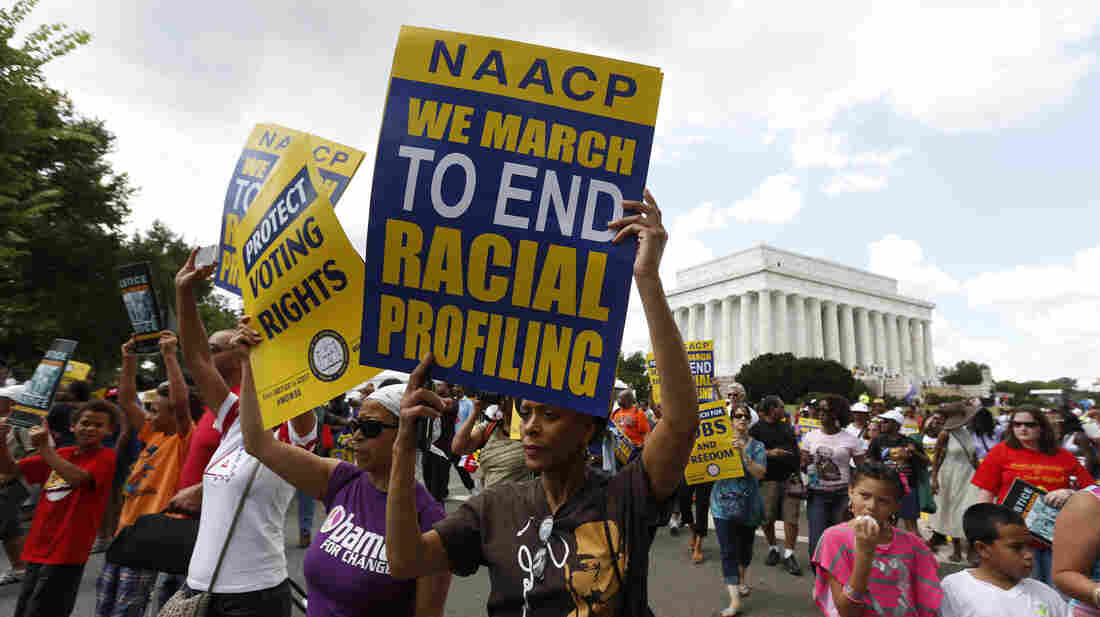 Demonstrators on Saturday in Washington, D.C., commemorate the 50th anniversary of the March on Washington for Jobs and Freedom. Kevin Lamarque/Reuters/Landov hide caption 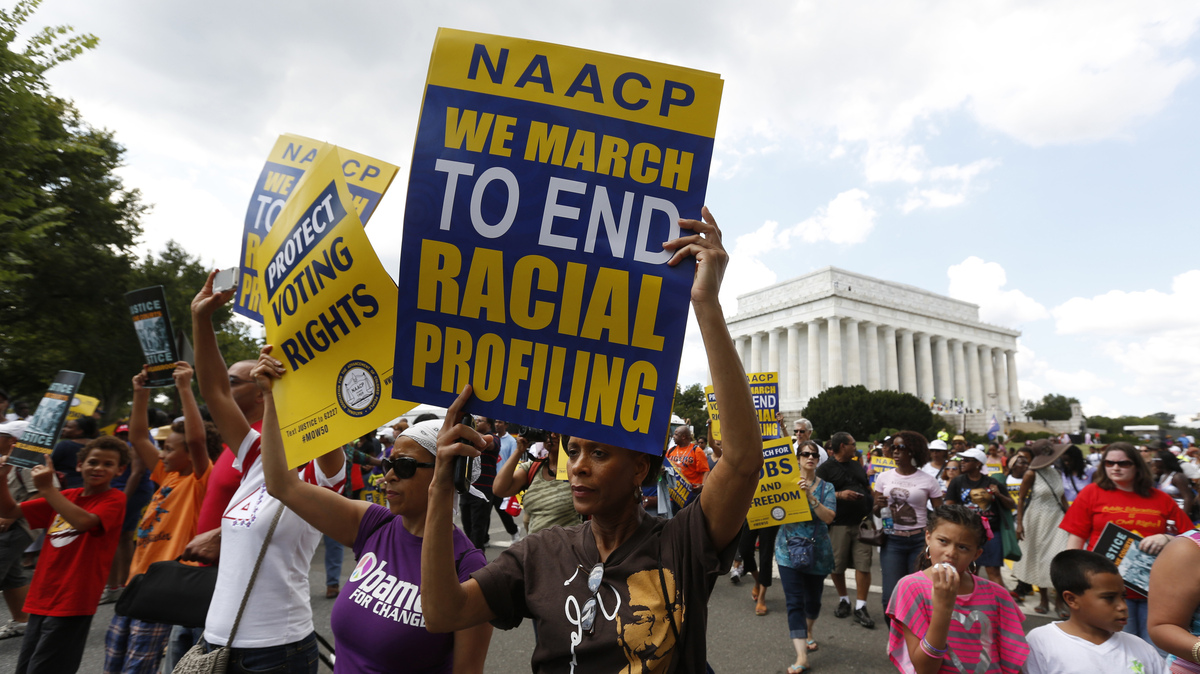 Demonstrators on Saturday in Washington, D.C., commemorate the 50th anniversary of the March on Washington for Jobs and Freedom.

They came by the beat of drums: grandparents with their grandchildren, community organizers and activists, church members and college students.

A slow, early-morning trickle of foot traffic out of the subway and off tour buses grew into a steady stream. By mid-morning, thousands filled around the reflecting pool in front of the Lincoln Memorial for a 50th anniversary commemoration of the March on Washington for Jobs and Freedom.

Many carried blue-and-yellow, poster board signs distributed by NAACP volunteers like Moné Armah of Houston, who stood by boxes where marchers could choose from a menu of printed slogans — from "We March For Jobs And Freedom" to "Protect Voting Rights."

The signs echoed similar calls for economic opportunities for all Americans 50 years ago. Back then, Todd Endo of Amissville, Va., helped carry a blue banner calling for "Better Americans For A Greater America," as he, his mother and other members of the Japanese American Citizens League walked across the National Mall.

Endo, now 71, stood near the reflecting pool while Martin Luther King Jr., declared his dream to the world. But Endo couldn't hear King's words. "The audio [system] wasn't very good. They had no video," he explained. "You could barely see the Lincoln Memorial, so we didn't hear any of the speeches."

'Waiting For The Check'

Fifty years ago, Jo Ann Johnson from the Bronx in New York City also stood on the National Mall. She was barely a teenager then. This time she arrived early with a folding chair and sandwiches for a better view of the speaker's podium.

Johnson recalled the metaphorical "check" from America's "bank of justice" that King mentioned in his 1963 speech. The check was supposed to extend "the riches of freedom and the security of justice" to all African-Americans. But Johnson said as an African-American in 2013, she's "still waiting for the check." 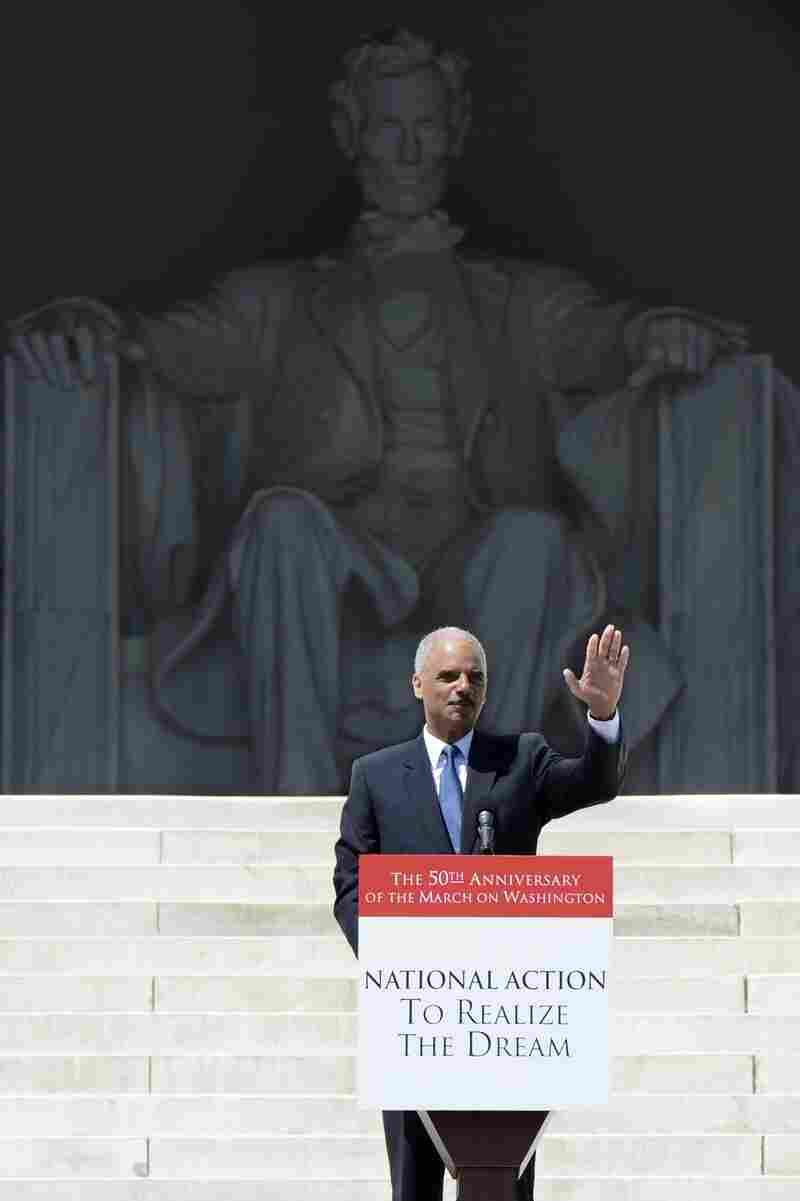 Attorney General Eric Holder speaks on the steps of the Lincoln Memorial during the March on Washington 50th anniversary rally in Washington, D.C., on Saturday. Michael Reynolds/EPA/Landov hide caption 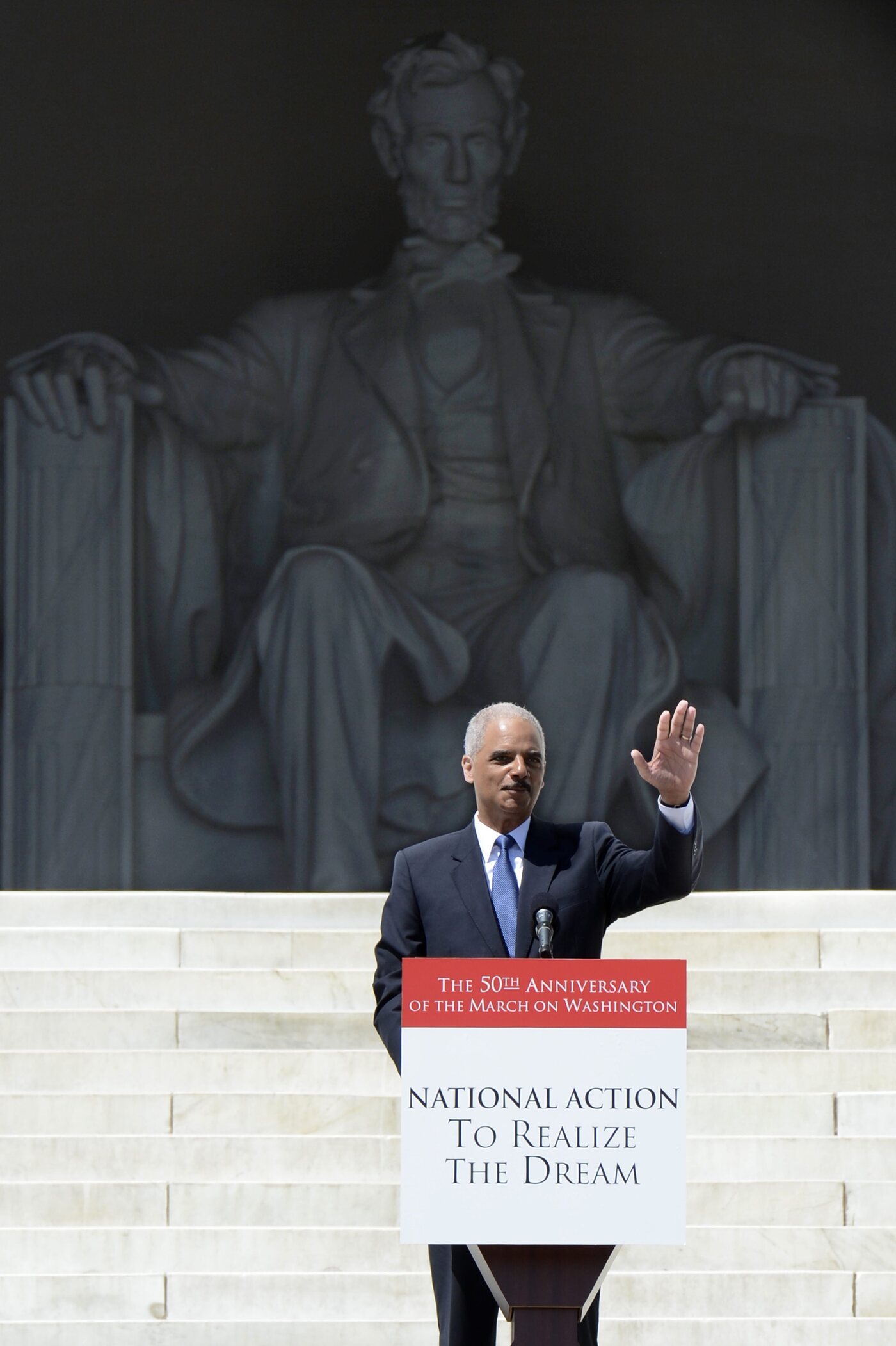 Attorney General Eric Holder speaks on the steps of the Lincoln Memorial during the March on Washington 50th anniversary rally in Washington, D.C., on Saturday.

Just two years old when King spoke, Eric Cole of Cincinnati was too young to understand the struggle in 1963. There's been progress over the years, but he said he's a "realist."

"I'm not looking for any miracles" to come out of the march's commemoration, Cole explained. "But I'm hoping that at least the consciousness will be raised about high unemployment."

Consciousness was just one of the goals for the national leaders who spoke on the steps of the Lincoln Memorial.

Attorney General Eric Holder emphasized in his speech that America's struggle for justice will go on "until every eligible American has the chance to exercise his or her right to vote, unencumbered by discriminatory or unneeded procedures, rules, or practices" and the criminal justice system "can ensure that all are treated equally and fairly in the eyes of the law" — references to recent policy pushes at the Justice Department under his leadership.

Other speakers called for the repeal of "stand your ground" laws, a central focus in the Florida trial and acquittal of George Zimmerman for the killing of teenager Trayvon Martin. Myrlie Evers-Williams, widow of the slain civil rights activist Medgar Evers, urged the crowd to apply a different meaning to the name of the controversial law.

"We can think of 'standing your ground' in the negative." Evers-Williams said. "But I ask you today to flip that coin. Stand your ground in terms of fighting for justice and equality!"

Evers-Williams represented an earlier generation of civil rights leaders who took to the podium. That generation, Rev. Al Sharpton underlined in his keynote speech, paved the way to success for younger generations.

"You got there because some unleaded grandmas, who never saw [an] inside of a college campus [and] put [their] bodies on the line in Alabama and Mississippi and sponsored you up here," said Sharpton, founder and president of the National Action Network, which helped organize Saturday's event.

Cory Booker, the 44-year-old mayor of Newark, N.J., and U.S. Senate candidate, directed his speech to his peers who, like him, "were not even alive" for the 1963 March on Washington.

"I call upon my generation to understand that we can never pay back the struggles and the sacrifices of the generation before," he said. "But it is our moral obligation to pay it forward."

It's a call to action that inspires Kwanzaa Nivens, 38, of Washington, D.C.

"Just to hear what a lot of people went through 50 years ago to get us to where we are today, it really motivates me to do more."

For Nivens, doing "more" on Saturday meant marching to the Martin Luther King Jr. Memorial and then the Washington Monument in her tennis shoes. She'll lace them up again on Wednesday as a volunteer at another commemoration on the March on Washington's official 50th anniversary.