Accessibility links
March On Washington, Coinciding Murders Redefined Liberties : Code Switch On the same day as the March on Washington, two young white women were murdered in their apartment in Manhattan. The Career Girl Murders, as they became known, led to horrific injustice against a 19-year-old black man. His story had in impact on the law, and on the country. 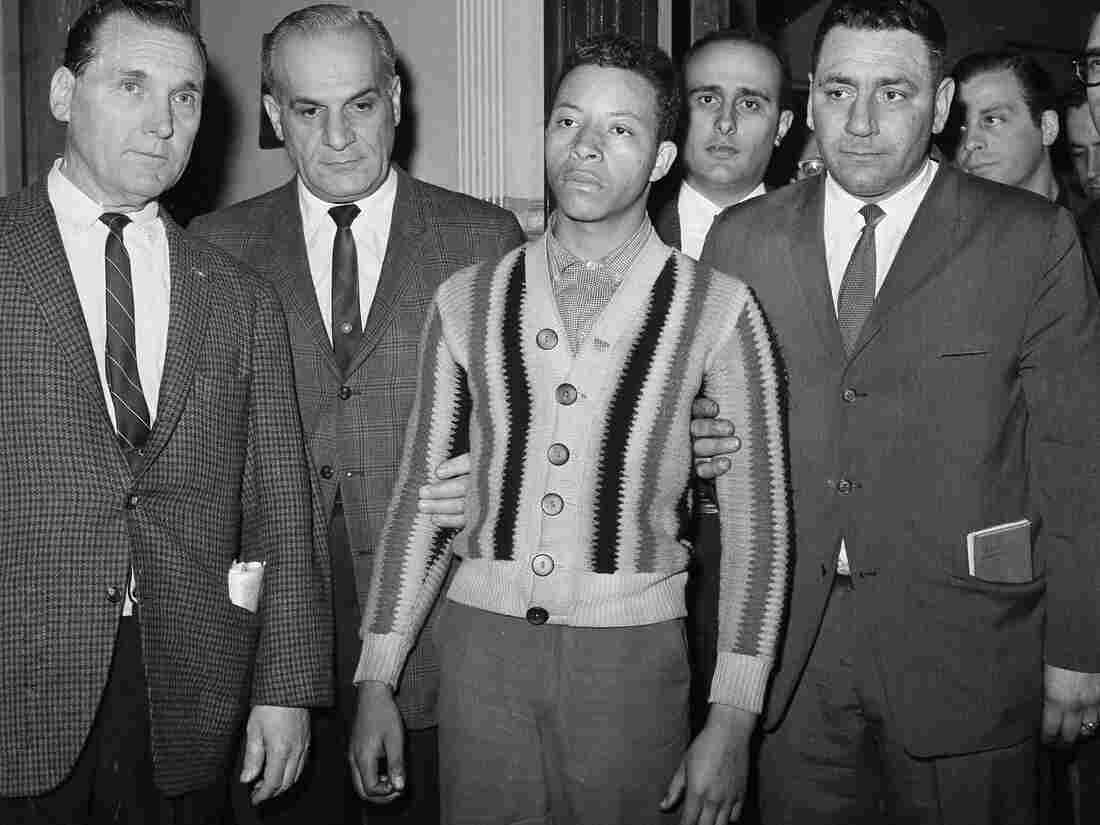 George Whitmore Jr., a 19-year-old unemployed laborer, is shown in a Brooklyn, N.Y., police station on April 25, 1964, after his arrest in the Career Girl Murders. Jack Kanthal/AP hide caption 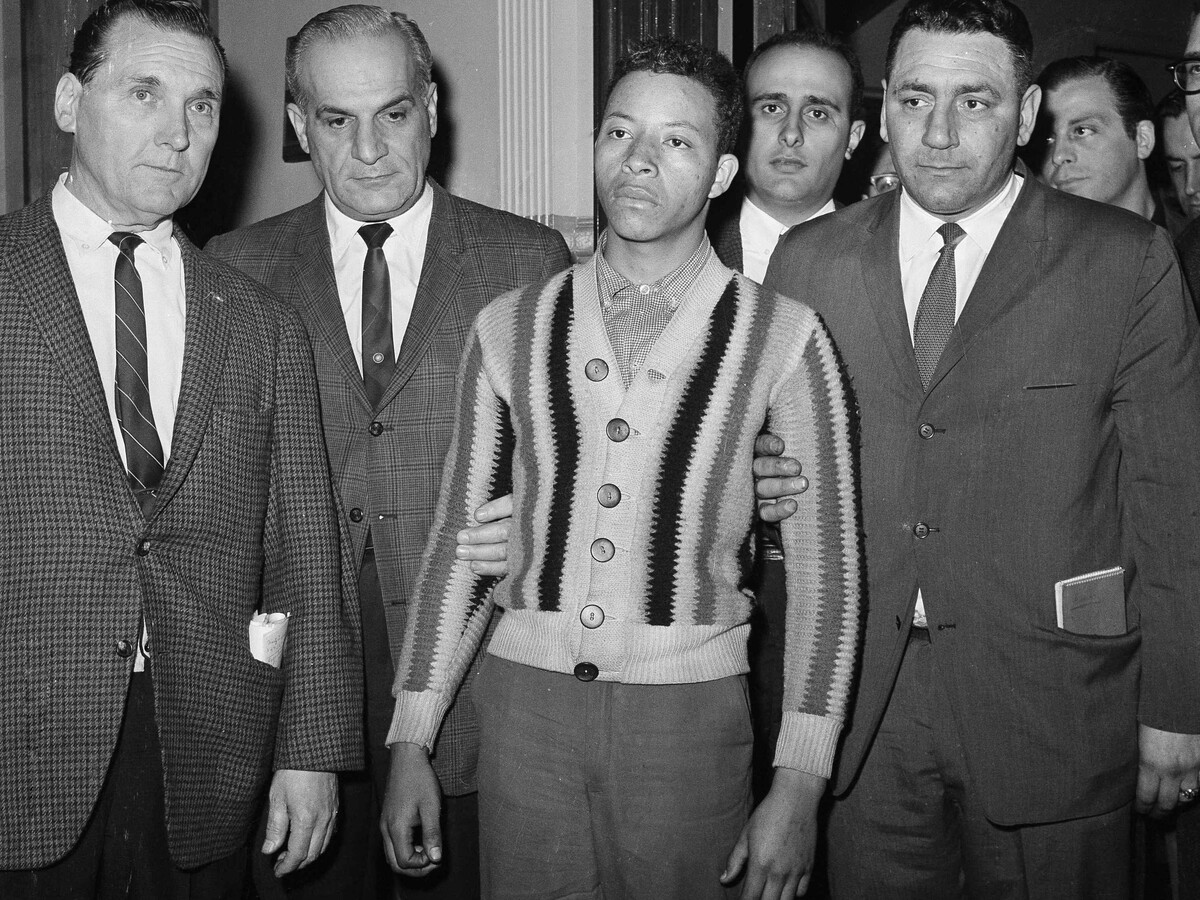 George Whitmore Jr., a 19-year-old unemployed laborer, is shown in a Brooklyn, N.Y., police station on April 25, 1964, after his arrest in the Career Girl Murders.

Wednesday marks the 50th anniversary of the Rev. Martin Luther King's "I Have a Dream" speech. But something else happened on Aug. 28, 1963.

It was a horrible crime, a shocking double murder that shared front page space in the New York papers with the March on Washington. It led to a terrible case of injustice.

But, in the end, it contributed to a redefinition of our liberties, and the coincidence of its happening on the same day as the March on Washington actually had a lot to do with it.

The case also gave us a hugely popular TV show.

No one knows this story better than Selwyn Raab, who is now retired from The New York Times, where he covered organized crime.

Raab was a young reporter for the now defunct New York World-Telegram and Sun in 1963, at the time of the so-called Career Girl Murders.

The savagely stabbed bodies of Janice Wylie and Emily Hoffert were found in their apartment on the Upper East Side of Manhattan.

"This was a — to put it mildly — sensational case because they were two young women from prestigious families," Raab remembers. "It became dubbed the Career Girl Murders because it seemed a threat to young women living alone presumably in safe, prestigious neighborhoods, and also because of the way the two women were carved — virtually disembowled. So it appeared that there was a mad killer loose."

For many weeks, no arrests were made in the case, and then detectives identified a young man in Brooklyn as the killer.

"The case looked like a cold case, despite all the intensive investigations," Raab says. "Hundreds of detectives were pulled off their regular beats from all the boroughs in the city of New York to participate, and there seemed to be no solution. Except suddenly, out of nowhere, in an area quite different from the Upper East Side — Brownsville [Brooklyn] — the police suddenly announced they had solved the Wylie-Hoffert case."

The man arrested and charged with the crime was George Whitmore Jr. He was 19 and black. Several years earlier, he had dropped out of school in Wildwood, N.J. The day of his arrest, he had been in Brooklyn looking for work.

For many years to come, Whitmore would routinely be described as being of subaverage intelligence. Raab came to know him and says he wasn't that at all. Vanity had kept him from wearing glasses, so he had trouble reading in school.

Whitmore was picked up for another assault, an attempted rape, for which he would ultimately be exonerated. He was taken to the 73rd Precinct in Brooklyn. He was held for 24 hours, questioned around the clock.

"They said the reason they questioned George Whitmore was because in his wallet, he had a photograph of a white, blond woman, and according to this detective, it resembled or he was sure it was Janice Wylie. Based on that he began questioning Whitmore, and Whitmore easily confessed, giving details that only the killer could know. It was a 63-page confession."

Whitmore was charged with the most notorious double murder New York had seen in years. He had confessed to it. But he didn't do it.

Nor did he commit the other murder, or the attempted rape. And the photo wasn't Janice Wylie. It was a girl from New Jersey. In fact, the case against Whitmore never made much sense. Why would he go the Upper East Side? Why would he choose that apartment?

The police in Brooklyn made him out to be an insane, crazed killer. So they sent him off to New York's Bellevue Hospital for a psych evaluation.

"Another inmate in the psychiatric ward with him told him, 'Why don't you tell your side of the story.' And this person got Whitmore to write what he called his diary of what had happened to him. And this other inmate, when he got out, he brought the diary to me.

"It was the first time I saw anything about Whitmore's version of what had happened in that 73rd Precinct in Brooklyn during those 24 hours. He said, in essence, he had been coerced. Words had been put into his mouth. He had been threatened, and that he was in such a mental state he wasn't sure what he was saying," Raab said.

"He also mentioned there was no way he could have been in New York on the date of the Wylie-Hoffert murders, Aug. 28, 1963, because he remembered it vividly: He had spent the entire day in Wildwood. There were other friends, they were in restaurants and in clubs, watching the demonstration in Washington."

Raab went to see Whitmore's mother, who told him she knew he was in Wildwood on that memorable day. She, too, remembered it for the King speech. She gave Raab the names of people there who would remember it, too.

"I went to Wildwood. I found the people she had given me. They also verified and corroborated where George had been on that date. I also went to see one of the police officers in Wildwood who had befriended George when he was there, and George was known as somebody who wasn't a combatant. He wasn't somebody who got into trouble; it was usually the other way around. He was a very meek character. People were picking on him.

"And this police officer said, it's funny: New York detectives had been there several weeks before, and they had shown him a photograph of a white young woman, and he knew exactly who that was. Whitmore had always said he had found that photograph in a garbage dump where he worked with his father in Wildwood, and to impress his buddies and his friends that he had a white girlfriend, he had put the photo in his wallet."

Raab would later piece together what had happened.

The Manhattan district attorney had been tipped off about another man, a drug addict named Richard Robles, who had told a friend about committing the crime.

The friend was trying to get lenient treatment in an unrelated murder case against him. So he agreed to secretly record Robles describing the Wylie-Hoffert killings.

The Manhattan district attorney, Frank Hogan — a living legend among prosecutors in those days — had decided that a public exoneration of Whitmore would tip off Robles. So even having heard what Raab heard in Wildwood, he let the victim of the coercive interrogation twist in the wind.

Robles was finally arrested and charged with the murders in January 1965. It was evidently a burglary gone wrong: One of the women had told Robles she could identify him, and rather than flee, Robles killed them both.

When all this came out, New Yorkers were left with a disturbing horror story of bad police work. An innocent man could be made to confess to murder. And as Raab recalls, it was not incidental that the innocent man was black.

"There was one detective who was essentially responsible for coercing George and manufacturing that confession. His name was Edward Bulger, and it turned out later that Bulger claimed that he could tell when a black lied, because he could see his stomach churn. So there was no question that the confessions and the arrest and the interrogation of George were racially inspired."

Whitmore died last year. His story had an impact on the law and on the country.

His coerced confession was cited in the legislative debate when New York outlawed the death penalty. It was footnoted in the Supreme Court's Miranda ruling, which required suspects to be told their rights, including the right to a lawyer.

For Whitmore, vindication came slowly. By the time he was finally exonerated of all the crimes he had confessed to in that Brooklyn station house, he had been in and out of prison for nine years.

Raab wrote a book about the case — Justice in the Back Room — and then he wrote the pilot for a TV show that was based on it.

Raab says the television people couldn't see a reporter as a hero, so for the two-hour program, The Marcus-Nelson Murders, they invented a heroic detective.

He was played by the actor Telly Savalas and named Kojak. The show ran for five years in the 1970s.