Accessibility links
Commemorating A March Of Young People, Sans Young People : Code Switch Wednesday's remembrance of the March on Washington felt like a valediction for an aging generation. 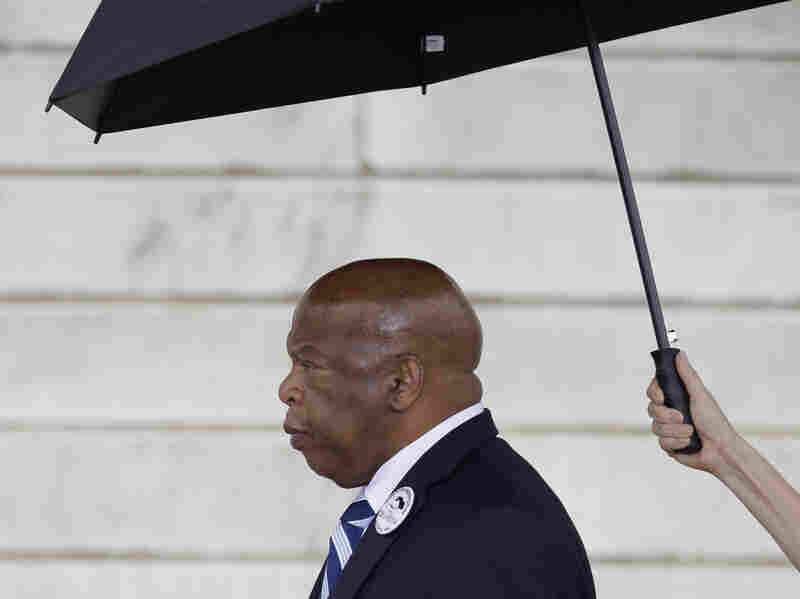 Rep. John Lewis (D-Ga.) is the only person who spoke at the 1963 march who is alive today. Carolyn Kaster/ASSOCIATED PRESS hide caption

Maybe it was the dreary weather and the many older folks who had the good VIP seats on the steps of the Lincoln Memorial, but Wednesday afternoon's commemoration of the March on Washington's 50th anniversary felt like a valediction for the civil rights generation.

They made this world possible and should be honored.

John Lewis was just 23 years old when he helped put together the 1963 march. And he was a hothead. In the original draft of his speech at the March on Washington, he chastised President Kennedy's civil rights efforts for being "too little and too late" and called for activists to "march through the heart of Dixie, like Sherman did." Other speakers threatened not to participate if he didn't revise his remarks. He did.

Lewis is 73 now, his civil rights bona fides beyond question, and a figure of almost universal reverence. He was also the only person who spoke at the original march who is still alive. In the half-century since, he and the other pillars of the movement have morphed from political agitators to insiders. And gatekeepers, too.

It's a shift that President Obama himself alluded to in his speech on Wednesday. "Because they marched, city councils changed and state legislatures changed and Congress changed and, yes, eventually the White House changed," he said in the biggest applause line of the day.

Celebrities like Jamie Foxx and Forrest Whitaker urged young people to take up the mantle of the civil rights generation, and the King family and President Obama all alluded to work left unfinished. But the young people they were ostensibly exhorting to action were conspicuously absent from the official proceedings. Most of the day's speakers qualify for AARP membership — or should start to get mailers soon. (Foxx is 45. Whitaker is 52. Oprah Winfrey is 59.) That's a stark contrast to the age of speakers 50 years ago at the March. King was 34.

Phil Agnew, who is 28, is the founder of the Dream Defenders, a group that has pointedly adopted the civil rights era approach to nonviolent protest as their template. The Dream Defenders made headlines for their activism in Florida following the Trayvon Martin shooting, and Agnew had been invited to Wednesday's commemoration to speak — just ahead of Reverend Al Sharpton, in fact.

But that's not how it went down on Wednesday.

"I could see the stage, I could see the TelePrompTer that the speakers were using," he said. Agnew could see the text Hill Harper, the actor and author who was emceeing the events, was to read to introduce him to the crowd.

His speech, he said, was meant to be about assuming of that mantle. "It was going to be a call to our generation and to future generations and say...we're ready," he said. "We're ready to take the torch and rise up."

But one of the production people told him that he'd been dropped. "Nixed. 'It looks like you've been cut, Philip'," Agnew recalls the man saying. Apparently, some speakers had apparently run long and time was tight.

"I was just shocked," he said later. His friends were there. This would have been a big moment for the Dream Defenders, which is comprised mostly of college students. (Agnew decided to record his speech anyway, which is more fiery than his description. You can watch it here.)

Agnew wasn't alone. Sofia Campos, a young organizer who has been outspoken in pushing for immigration reform, was also dropped from the speaking schedule at the last minute.

We wont use this as an opportunity to widen any divisions. Our movement is bigger than even this moment. Youth will rise. Our time is now.

So there was Agnew, a young activist trying to press on the establishment to change, sharing the stage with his elders. Those elders, and the ones they were being name-checked at a commemoration attended by three American presidents, were undoubtedly part of the establishment that people like the Dream Defenders were trying to upset. (Indeed, much of the "work left undone" alluded to by so many of Wednesday's speakers falls most heavily on young folks — stop-and-frisk and racial profiling being the most obvious examples.)

I asked him if he felt there was an inherent tension there.

"The one thing people doubt about young people is our ability to see the big picture," Agnew said. He said he had nothing but respect for the older folks. "If there are older generations that are willing to offer their expertise and guidance, then we're grateful. But if not, we're willing to figure it out."