Accessibility links
About This Miley Cyrus Business ... : Code Switch A roundup of some of the smartest and most-discussed takes of Miley Cyrus' racy, race-y performance at last Sunday's MTV's Video Music Awards.

About This Miley Cyrus Business ...

About This Miley Cyrus Business ... 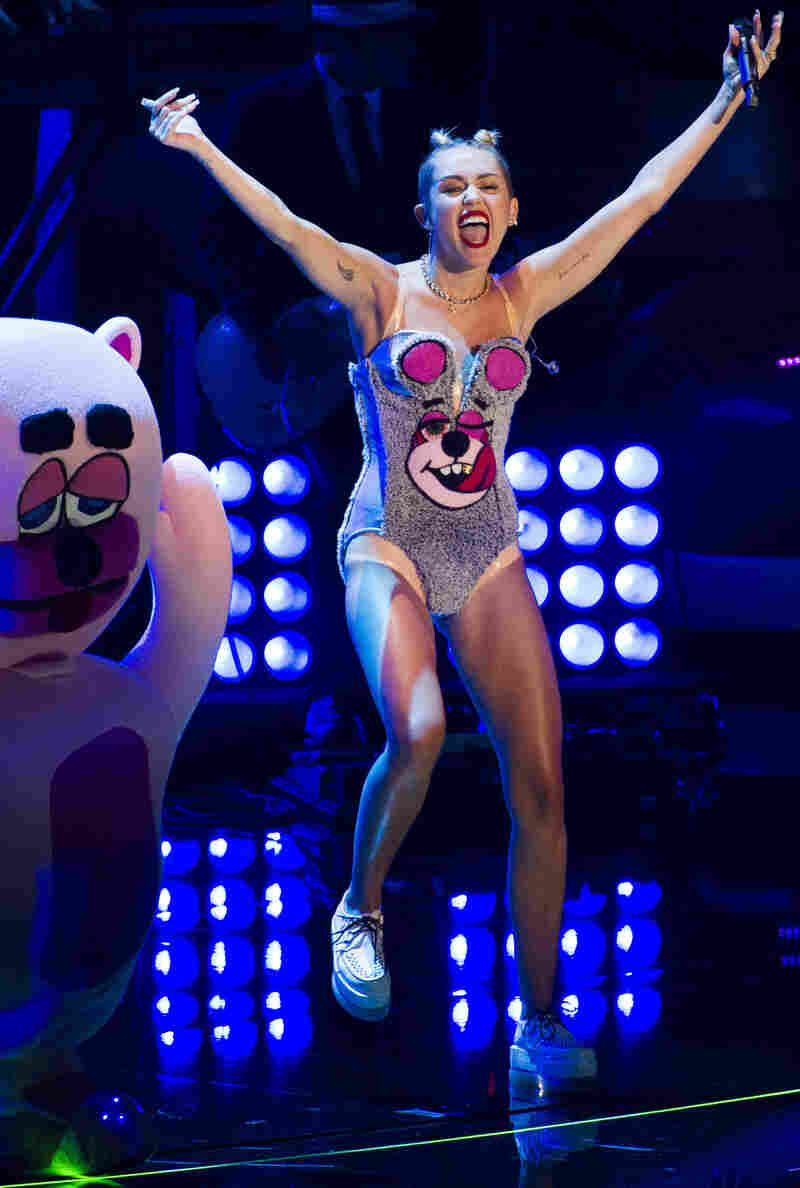 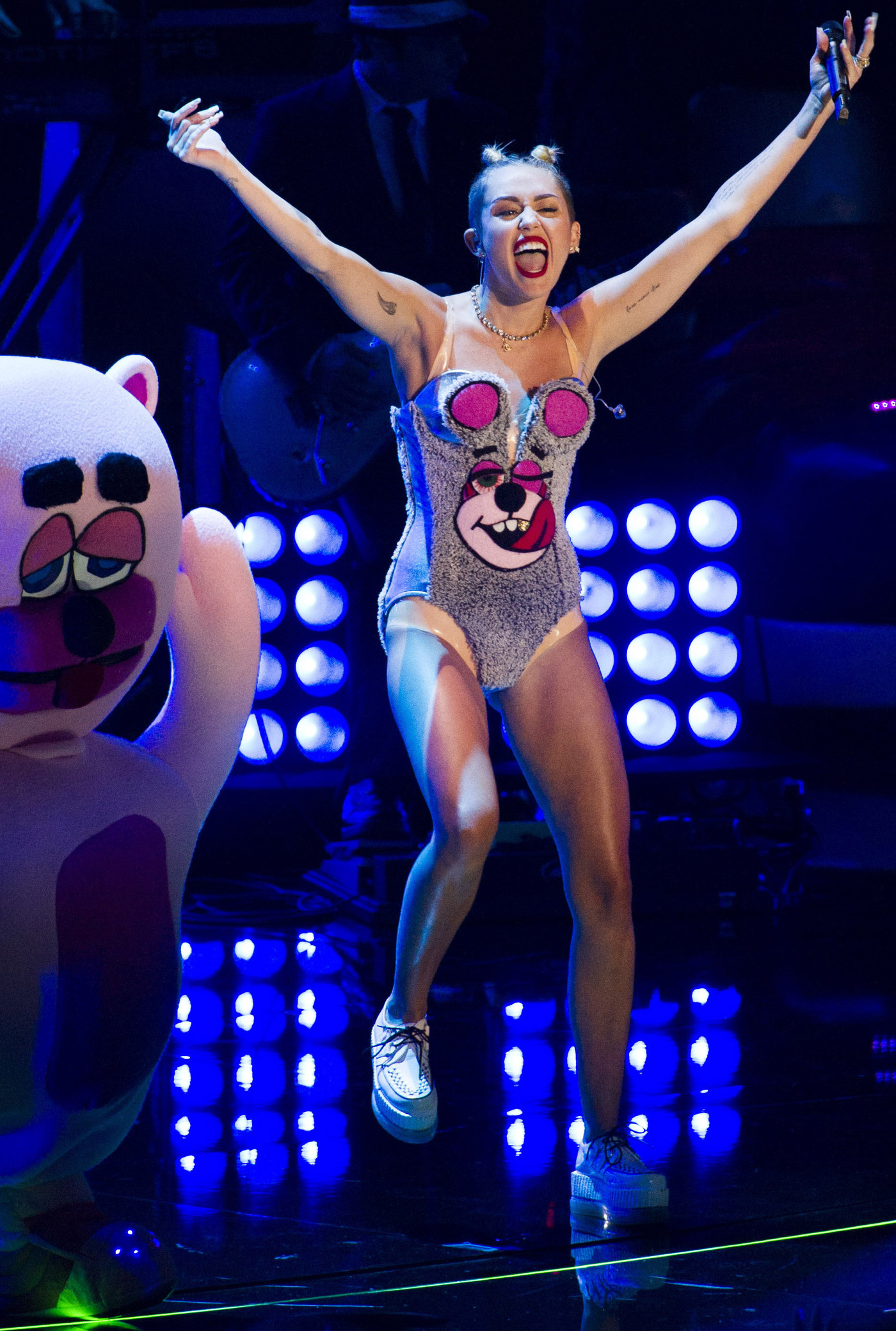 Miley Cyrus did stuff last weekend. Perhaps you heard about it?

So people have been hitting us up on Twitter and asking us to weigh in on the disasterpiece that was Miley Cyrus' performance at Sunday's MTV Video Music Awards. Perhaps you've heard someone mention it? There was twerking and teddy bears and boatloads of, uh, racial tone deafness.

Part of our silence was due to the Code Switch team's pronounced, collective feeling of fremdscham — what was she doing and will we ever be able to unsee what she did? — but another part of it was due to the abundance of smart, frank takes on the racial semiotics of Cyrus' performance that were already out there.

We wanted to point you to a few of them. (Just a heads up: Some of them get pretty explicit, like this next one.)

Tressie McMillian Cottom, a sociologist (and a fantastic tweeter), wrote about the type of women Cyrus chose to accompany her onstage at the VMAs and how those women's bodies — women with shapes like Cotton's — were meant to be seen as fun house curiosities.

"I immediately thought of a summer I spent at UNC Chapel Hill. My partner at the time fancied himself a revolutionary born too late for all the good protests. At a Franklin Street pub one night we were the only black couple at a happy hour. It is one of those college places where concoctions of the bar's finest bottom shelf liquor is served in huge fishbowls for pennies on the alcohol proof dollar. I saw a few white couples imbibing and beginning some version of bodily grooving to the DJ. I told my partner that one of them would be offering me free liquor and trying to feel my breasts within the hour.

"He balked, thinking I was joking.

"My partner could not believe it until not 30 minutes later, with half the fishbowl gone, the white woman bumps and grinds up to our table and laughing tells me that her boyfriend would love to see us dance. 'C'mon girl! I know you can daaaaannnce,' she said. To sweeten the pot they bought our table our own fishbowl."

The blogger BattyMamzelle wrote a post which was also posted on Jezebel that has garnered a ton of attention. Along the lines of our continuing roundtable on race, feminism and digital spaces, she wondered why so many feminists who were defending Cyrus from slut-shaming were missing all the hard-to-miss racial imagery the pop star was playing with.

"See the problem isn't that they talked about slut shaming. That deserves attention. The problem is that they completely sidestepped the other glaring teddy bear in the room, and that is the commodification of black female sexuality in Miley's performance. But it's not a thing that white women deal with, so it didn't warrant inclusion or discussion by the white-led mainstream feminist media. ...

"Now some people have said that Miley is only 20, and she's 'just a child' and that she doesn't understand what she's doing. But Miley isn't new to this. Her video for the single wasn't even the first precursor to this madness. She has been quoted as saying that she explicitly wanted 'a black sound' for her new album. She is more than aware of what she's doing, and has consciously made the choice to dabble in traditionally black aesthetics and sound in order to breakaway from her good girl image and further her career."

And Jody Rosen, the music critic at Vulture, argued that Cyrus' VMA shtick — wrapping herself in the aesthetic trappings of some form of black music — is an old tradition among pop musicians trying to recast themselves.

"A doctoral dissertation could (and will) be written on the racial, class, and gender dynamics of Cyrus's shtick. I'll make just one historical note. For white performers, minstrelsy has always been a means to an end: a shortcut to self-actualization. The archetypal example is in The Jazz Singer (1927), in which Al Jolson's immigrant striver puts on the blackface mask to cast off his immigrant Jewish patrimony and remake himself as an all-American pop star.

"Cyrus's twerk act gives minstrelsy a postmodern careerist spin. Cyrus is annexing working-class black 'ratchet' culture, the potent sexual symbolism of black female bodies, to the cause of her reinvention: her transformation from squeaky-clean Disney-pop poster girl to grown-up hipster-provocateur. (Want to wipe away the sickly-sweet scent of the Magic Kingdom? Go slumming in a black strip club.) Cyrus may indeed feel a cosmic connection to Lil' Kim and the music of 'the hood.' But the reason that these affinities are coming out now, at the VMAs and elsewhere, is because it's good for business."

At The New York Times, Jon Caramanica panned out to this year's VMAs more broadly and found a celebration of white folks playing in black styles.

"[T]his was a banner year for clumsy white appropriation of black culture — the shambolic, trickster-esque performance by Ms. Cyrus, to whom no one has apparently said 'no' for the last six months or so, which included plenty of lewdness and a molesting of Robin Thicke; the ubiquity of Macklemore & Ryan Lewis, the edgeless and intensely popular hip-hop duo, who received three awards, including best hip-hop video. They also performed 'Same Love,' their gay-rights anthem, with the singer Mary Lambert, though when Jennifer Hudson emerged to perform the last part of the song with Ms. Lambert, it felt like an apologetic compensation for the night's whitewash. (For good measure, Eminem announced the details of his new album in ads sponsored by Beats by Dre.)"

So there you have it: a good roundup of insightful, challenging takes on this Miley Cyrus business that are worth your time. And bonus — those folks spared us from having to watch the video again to dissect it.

UPDATE: Tressie McMillian Cottom's name was misspelled in an earlier version of this post.