Accessibility links
Are You Ready For Some Controversy? The History Of 'Redskin' : Code Switch With the start of a new football season comes the renewal of the debate over the Redskins' controversial name. Writer Lakshmi Gandhi takes us through the convoluted history of the word "redskin." 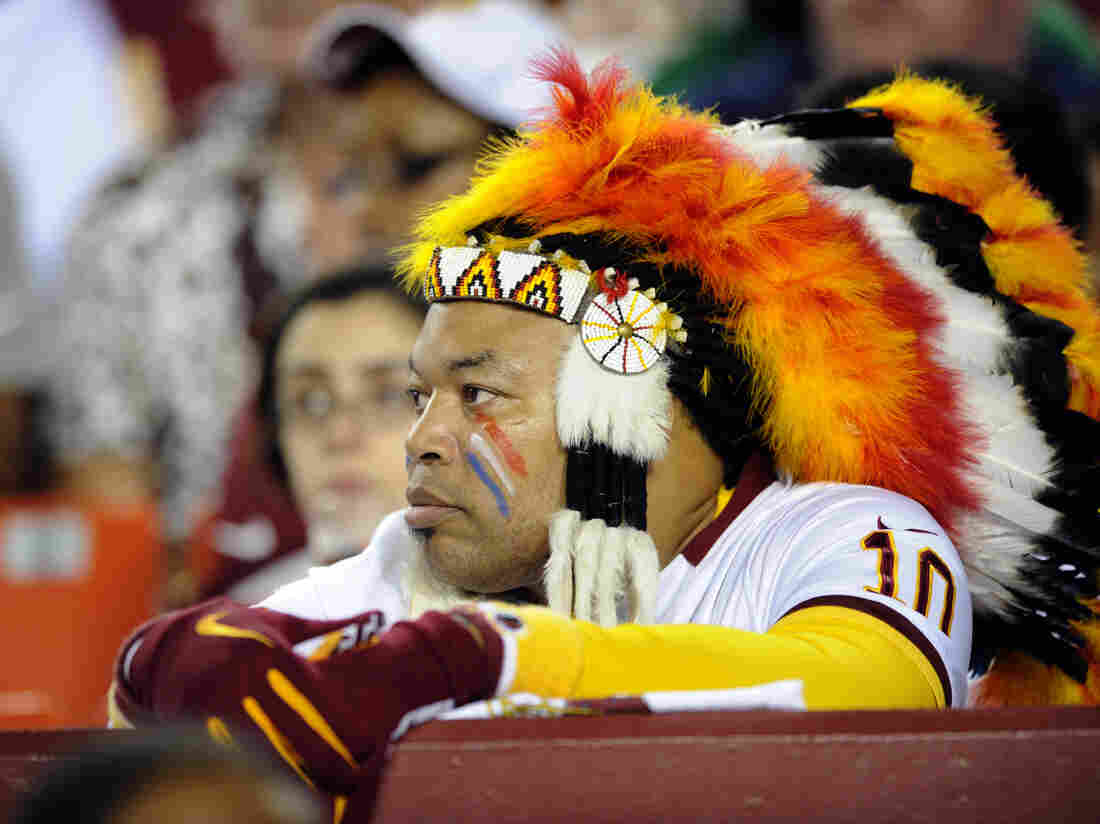 A Washington Redskins fan watches from the sidelines during the first half of an NFL preseason football game this August. Nick Wass/AP hide caption

Monday Night Football kicks off this evening with the Washington Redskins facing off against the Philadelphia Eagles at FedEx Field. As the Redskins start a new season, they are once again in the center of a national debate about their name.

On Thursday, the Oneida Indian Nation in upstate New York announced the launch of a radio ad campaign urging the team to change its moniker. The ad begins with an Oneida leader commending NFL Commissioner Roger Goodell for condemning the behavior of Eagles player Riley Cooper, after Cooper was recorded using the N-word at a concert this summer. While the narrator applauds the NFL for taking swift action in the Cooper case, he then draws a parallel between that slur and the word "redskin." "We do not deserve to be called redskins," he says in the ad. "We deserve to be treated as what we are — Americans." The spots began airing in the D.C. market on Sunday. (You can listen to it in full here.)

The Oneida campaign is just the latest protest this year against the Redskins' name. The online magazine Slate made headlines last month when it declared the site will no longer use "Redskins" to refer to the franchise, choosing instead to refer to "the Washington NFL team" from now on. Slate isn't alone: The New Republic and Mother Jones quickly followed suit. Major news sources like The Washington Post, The New York Times and The Associated Press, however, will continue to refer to the team as the "Redskins" this season.

But where did the word "redskin" come from? Many dictionaries and history books say the term came about in reference to the Beothuk tribe of what is now Newfoundland, Canada. The Beothuk were said to paint their bodies with red ochre, leading white settlers to refer to them as "red men."

According to Smithsonian historian Ives Goddard, early historical records indicate that "Redskin" was used as a self-identifier by Native Americans to differentiate between the two races. Goddard found that the first use of the word "redskin" came in 1769, in negotiations between the Piankashaws and Col. John Wilkins. Throughout the 1800s, the word was frequently used by Native Americans as they negotiated with the French and later the Americans. The phrase gained widespread usage among whites when James Fenimore Cooper used it in his 1823 novel The Pioneers. In the book, Cooper has a dying Indian character lament, "There will soon be no red-skin in the country."

The Pioneers and other books by Cooper were largely seen as sympathetic toward Native Americans and their struggles in the 1800s. Decades later, the word "redskin" began to take on a negative, increasingly violent connotation. Author L. Frank Baum, best known for his classic The Wizard of Oz, celebrated the death of Sitting Bull and the massacre at Wounded Knee with a pair of editorials calling for the extermination of all remaining Native Americans. In one of the December 1890 pieces, Baum wrote, "With his fall the nobility of the Redskin is extinguished, and what few are left are a pack of whining curs who lick the hand that smites them."

At around the same time the word "redskin" was becoming a word with negative connotations, other Native American words and images were becoming increasingly popular symbols for sports teams. In an article for the North Dakota Law Review, J. Gordon Hylton found that team owners frequently began using words with indigenous connections in the 1850s. "Native American names appear to have been chosen to emphasize the 'Americanness' of the team and its patriotic character," writes Hylton, without noting that at the same time popular culture was relegating Native Americans to the foreign and the extreme.

While Cooper's portrayal of Native Americans in books like The Pioneers was sympathetic, the portrayal of Indians created a backlash of sorts. In 1915, the poet Earl Emmons released Redskin Rimes, a book so offensive I had to double-check to make sure it wasn't a parody of the racism of that era. Emmons makes his intentions clear in the introduction of the work: "Those persons who got their idea of the Indian from Mr. Cooper have pictured him as an injured innocent. ... Those persons have acquired the wrong idea of the maroon brother." That introduction kicks off a series of poems, songs and speeches, each more offensive than the last.

Emmons' book was emblematic of the usage of the word "redskins" in the late 1800s and early 1900s, as the word went from being an identifying term to a derogatory slur. By the 1910s, it wasn't uncommon for filmgoers to encounter it, with the word frequently popping up in the titles of American Westerns.

The hit film Redskin (1929) was notable for two reasons: first, that it was one of the first films to use Technicolor; and secondly, that the script was surprisingly sympathetic toward its main character, a Navajo Indian who is constantly harassed because of his race. The portrayal of Native Americans in Redskin was very much ahead of its time — other films that used the word portrayed the culture as primitive and war-hungry. The 1932 Tom and Jerry cartoon "Redskin Blues" follows the beloved characters as they are attacked by Indians, surviving after they are rescued by the U.S. Army.

Just a year after that stereotype-laden Tom and Jerry cartoon was released, Boston Braves owner George Preston Marshall decided in 1933 to change the franchise's name from the Braves (another name with a racial history) to the Redskins. Team lore says the franchise adopted the name in honor of former coach William "Lone Star" Dietz, who identified as Native American. Dietz brought several Native American players he had coached at the Haskell Indian School with him to the team. Marshall also sought to strongly tie the team to Native American imagery, occasionally requiring Dietz to wear a Sioux headdress on the sidelines and telling players to wear war paint while on the field. 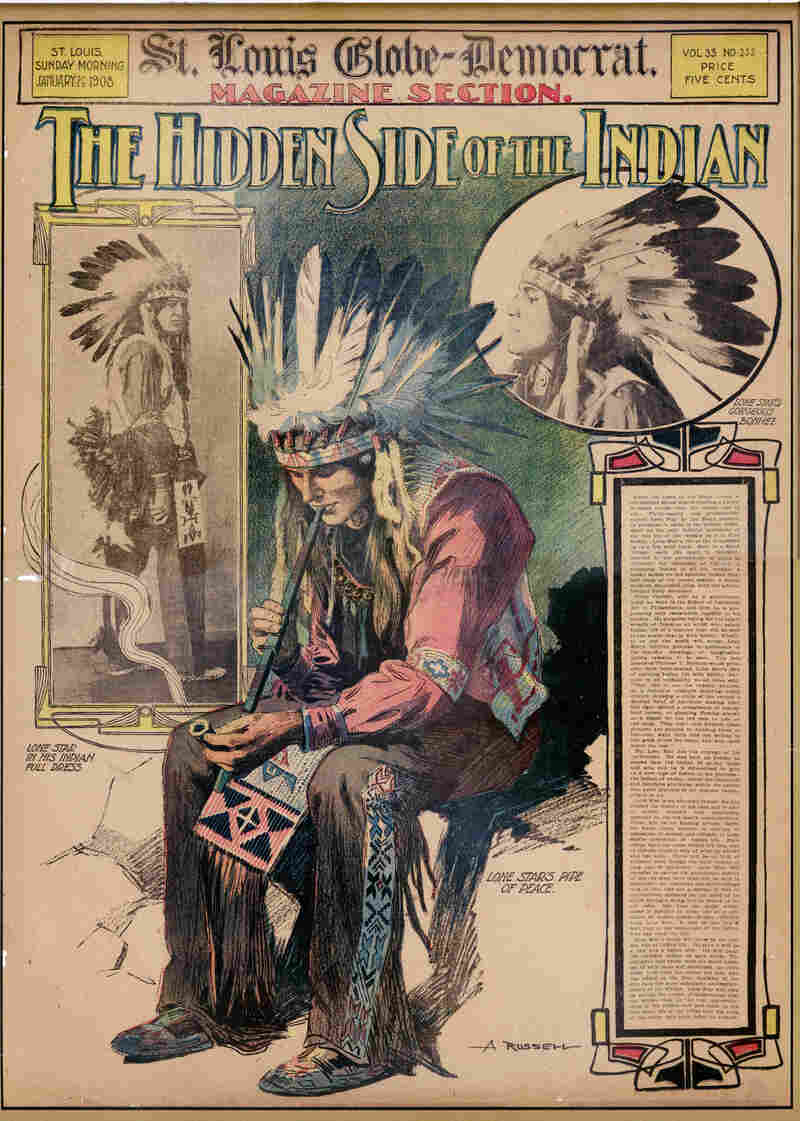 The cover of the St. Louis Globe-Democrat Sunday supplement from January 1908 shows William "Lone Star" Dietz, who in 1916 coached Washington State University to a Rose Bowl victory, in full Indian dress. Some credit Dietz with inspiring the name of the Redskins. AP hide caption 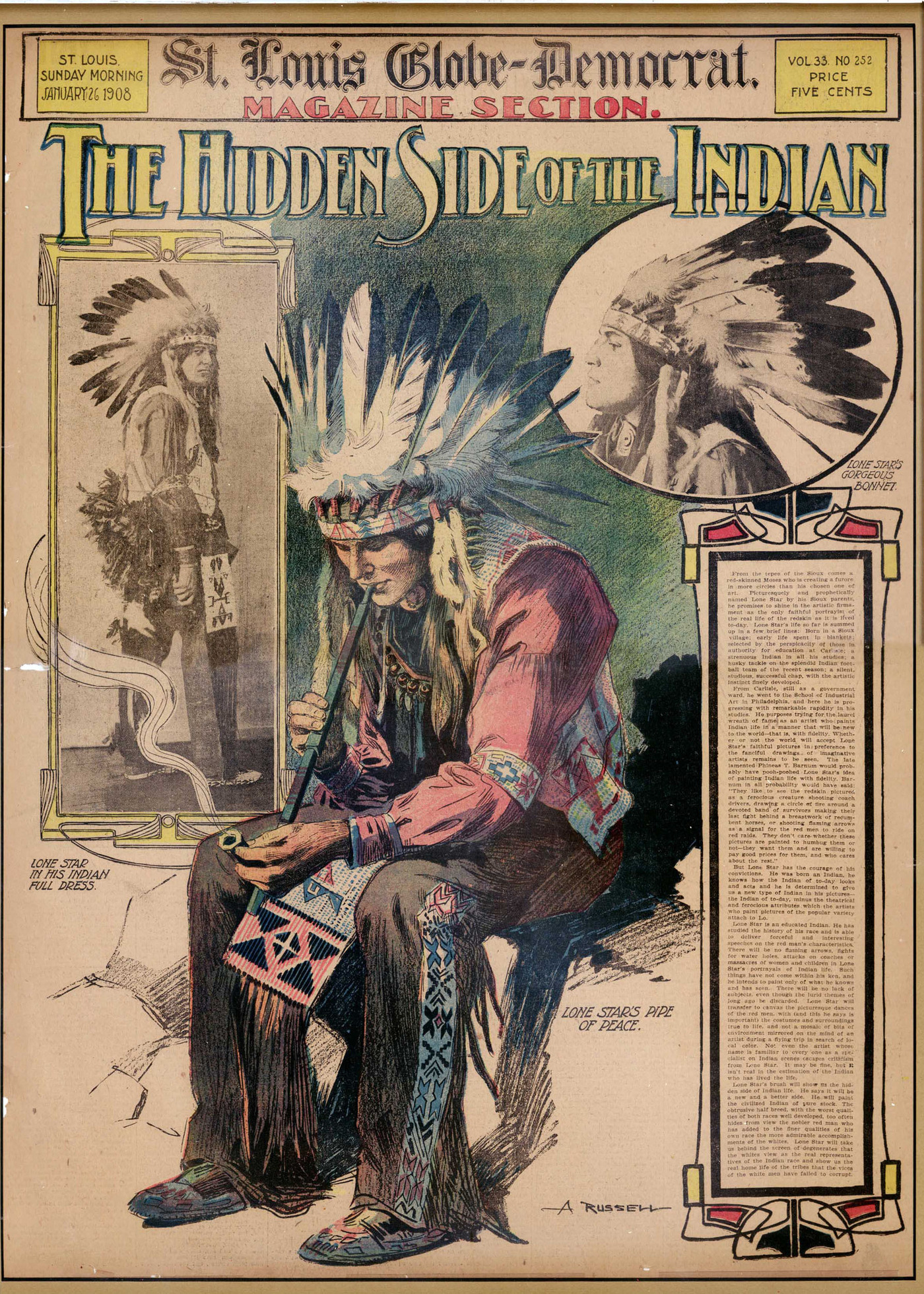 The cover of the St. Louis Globe-Democrat Sunday supplement from January 1908 shows William "Lone Star" Dietz, who in 1916 coached Washington State University to a Rose Bowl victory, in full Indian dress. Some credit Dietz with inspiring the name of the Redskins.

The word began to fade from everyday usage in the 1960s (though songs like the 1960 Richie Allen track "Redskin" would occasionally be released). As Ian Crouch recently pointed out in The New Yorker, "since 1971, nearly two-thirds of professional and amateur athletic teams bearing Native American iconography have made a change."

Recent months have seen several athletes and other sports figures speak out about the name, as well. In July, Redskins Hall of Famers Darrell Green and Art Monk spoke with the D.C. radio station WTOP.

"[If] Native Americans feel like Redskins or the Chiefs or [another] name is offensive to them, then who are we to say to them, 'No, it's not?' " Monk said. Green agreed, saying, "It deserves and warrants conversation because somebody is saying, 'Hey, this offends me,' and then you have a conversation."

Perhaps unsurprisingly, considering the team is based in Washington, many elected officials have also weighed in. D.C. Mayor Vincent Gray said earlier this year that the name has become "a lightning rod" and that the team would have to seriously consider changing the name if it wished to move from Maryland back into the District in the future. The mayor seems to also have a self-imposed ban on saying the name of the team, merely referring to it as "our football team" in his 2013 State of the District address. Members of Congress have also spoken out against the name, with a bipartisan group sending a letter to the team urging a name change.

And when the Smithsonian's National Museum of the American Indian hosted a symposium on Indian mascots in February, museum director Kevin Gover, himself a Native American, said the word was "the equivalent of the N-word." At the same event, former Colorado Sen. Ben Nighthorse Campbell asked the crowd to consider an equally offensive name for the local sports team: "How you would like for us to change the name of that team to the Washington Darkies?"

For his part, Redskins owner Daniel Snyder has been vocal in his support for the name and has insisted that it's here to stay. "We'll never change the name," Snyder told USA Today in May. "It's that simple. NEVER — you can use caps."

Native American activist Suzan Shown Harjo has been battling the Redskins over the name for more than 20 years. "The name is one of the last vestiges of racism that is held right out in the open in America," Harjo said in a recent phone conversation. "It's a toy of racism, and the people who are holding on [to the name] for dear life, they know that."

But do they really? A Washington Post poll from June revealed that 8 out of 10 fans believe the team should keep its name. However, you shouldn't expect to hear those same fans use the word in nonfootball conversations. Over half of those questioned agreed that the word "redskin" is an inappropriate term to describe Native Americans.

A previous version of this story misidentified writer Ian Crouch as Ian Crouther.

Clarification: We previously misstated Darrell Green's remarks to D.C. radio station WTOP, saying that Green had said the team should consider changing its name. The former Washington Redskins player actually told WTOP that the team should have a conversation about a name change.