Accessibility links
Why Do We Describe Asian Eyes As 'Almond-Shaped'? : Code Switch TV personality Julie Chen's recent revelation about getting plastic surgery to make her eyes look "less Chinese" has renewed a long-running discussion about how to describe an Asian person's eyes.

Why Do We Describe Asian Eyes As 'Almond-Shaped'?

Why Do We Describe Asian Eyes As 'Almond-Shaped'? 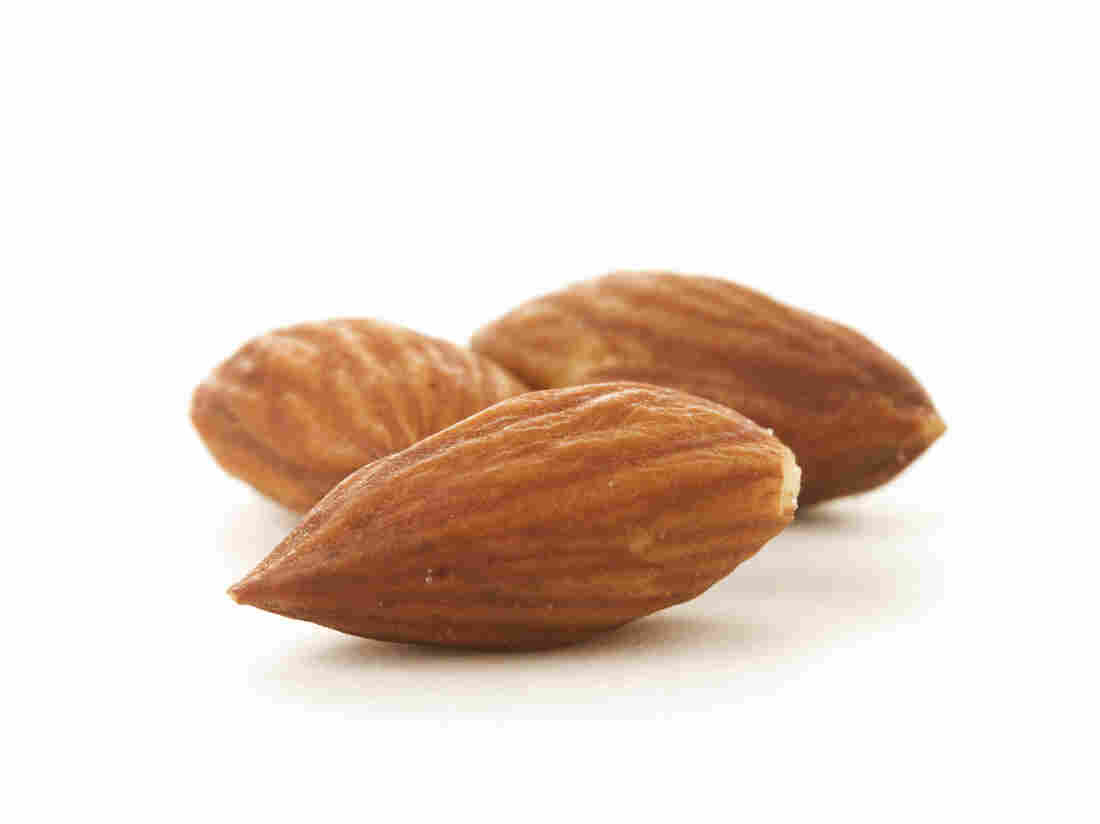 The shape of Asian eyes has been compared to almonds by Westerners for centuries. iStockphoto.com hide caption 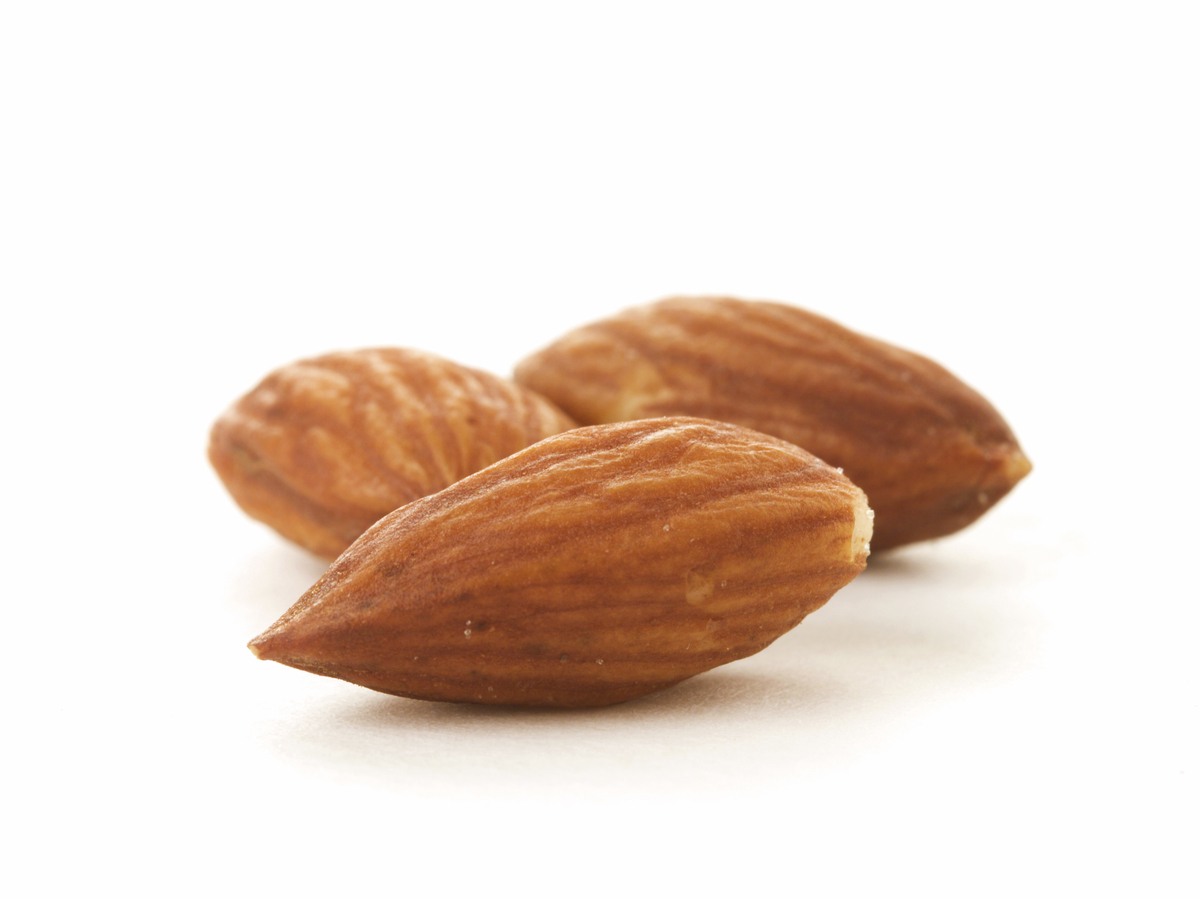 The shape of Asian eyes has been compared to almonds by Westerners for centuries.

Last week, Julie Chen revealed on The Talk that she had double eyelid surgery to make her eyes look "less Chinese" in order to advance her TV career.

"[Her news director] said, 'Let's face it, Julie. How relatable are you to our community? How big of an Asian community do we really have in Dayton?' " Chen recalled. "'On top of that, because of your heritage, because of your Asian eyes, I've noticed that when you're on camera, when you're interviewing someone, you look disinterested and bored because your eyes are so heavy, they're so small.'"

Chen's decision to pursue surgery was a painful one that involved her entire family. Some relatives claimed they'd disown her if she got the surgery. Now, years later, Chen says she looks "more alert." One of her co-hosts called the surgery "fabulous."

When you talk about the shape of an Asian person's eyes, it seems that people are fixated on two separate things: eyelids and epicanthal folds. Epicanthal folds are the bit of skin on the upper lid near the inner corner of the eye. Chen's double eyelid surgery is designed to create the appearance of larger and rounder eyes.

The obsession with Asian eyes, especially the shape, dates back centuries. And it seems like the easiest way to describe an Asian person's eyes is by likening them to nuts. Specifically, almonds. Like many others, I've thought: Hey! My eyes aren't even shaped like these things. And comparing the eyes of Asian folks to almonds isn't even really accurate, according to blogger Claire Light. She superimposed almonds over the eyes of Asian and white people. Light concludes, exasperated: "People, do I have to spell it out for you? East Asians don't have almond shaped eyes. White people do."

But where does the phrase "almond-shaped eyes" come from?

Back in the late 1700s, dudes (most of whom were white), penned odes to the beautiful, exotic Asian women they stumbled upon in their adventures in the Far East. The Oxford English Dictionary cites the first reference of "almond eyes" as appearing in a 1786 issue of The Asiatic Journal, a hodgepodge collection of essays about all things Asia. The journal shares a letter that the "Persian of Abul Casim" wrote to a buddy about his ideal woman. He lists the qualities he wants:

"May the friend of my fool, and intimate of my affection, ever embrace the maid of his desire. I have learnt there is a fair abounding with innumerable goods of the choice kind, some of which I have a great desire for, and request you to purchase for me. ... The following is a list of what I request. The shape of the cypress, of a becoming height, ... two eye-brows, arched as the noon moon; almond eyes, as many as you shall see ..." 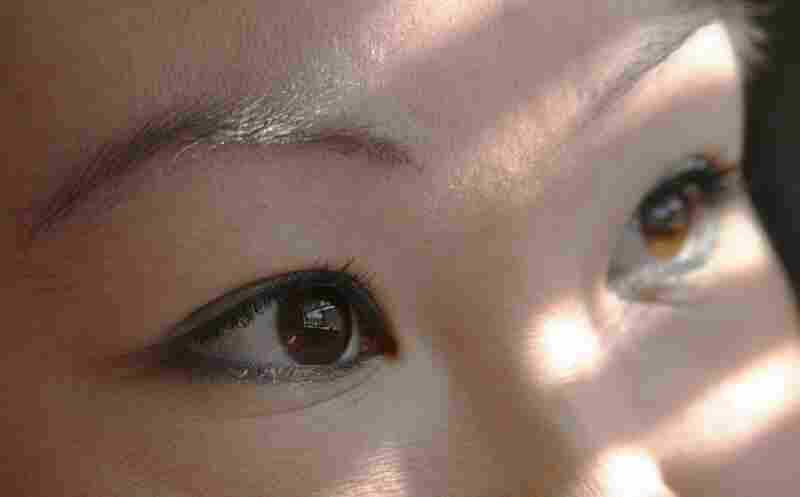 Here's a close-up stock photo that had, no joke, the description: "The almond eyes of an Asian girl." iStockphoto.com hide caption 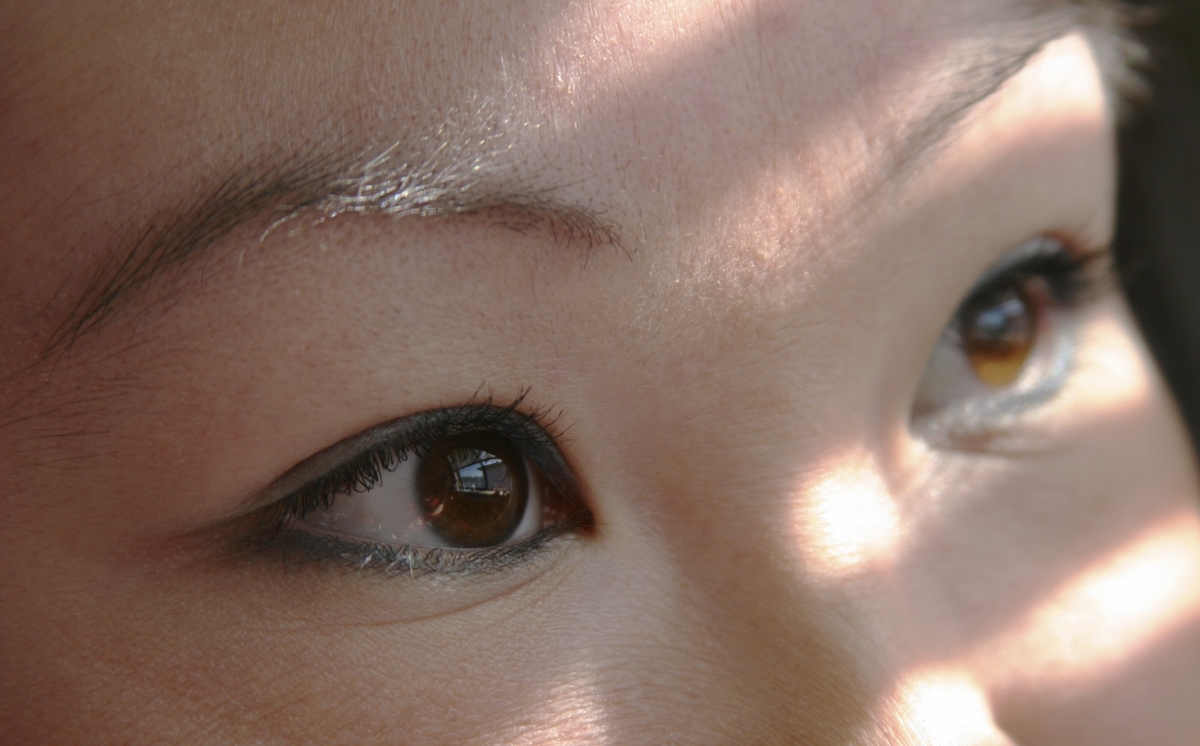 Here's a close-up stock photo that had, no joke, the description: "The almond eyes of an Asian girl."

Emphasis mine. The nutty flattery goes on and on and on. In 1842, another traveler wrote for The Asiatic Journal about the beauty of women from Kashmir:

"I do not think that the beauty of the women has been overrated. ... they have usually a pair of large, almond-shaped, hazel eyes, and a white and regular set of teeth."

Mark Twain used a variation of that phrase in 1870, in his satirical essay about a "well-dressed San Francisco" boy who was sent to prison for stoning a "Chinaman." (Give "Disgraceful Persecution of a Boy" a whirl if you're interested in reading about the era following the California gold rush or the prevalence of yellow peril.)

"... 'So and-so' captured a wretched knave of a Chinaman who was stealing chickens, and brought him gloriously to the city prison; and how 'the gallant officer Such-and-such-a-one' quietly kept an eye on the movements of an 'unsuspecting almond-eyed son of Confucius' (your reporter is nothing if not facetious) ..."

This tongue-in-cheek description, with its marker of foreignness — the "almond-eyed son of Confucius" — contrasts sharply with the pejorative use of the phrase, as seen in William Somerset Maugham's Of Human Bondage (1915):

"Near them sat a Chinaman, with a yellow face and an expansive smile, who was studying Western conditions at the University. He spoke so quickly, with a queer accent, that the girls could not always understand him, and then they burst out laughing. He laughed too, good-humouredly, and his almond eyes almost closed as he did so."

Despite the messy past of "almond-shaped eyes," it's now referenced in the most seemingly innocent of contexts. Today, we find the phrase hanging out in the sales description of the American Girl Dolls' Asian-American character, Ivy, aka "Julie's best friend."

Ivy's marketing description reads: "The Ivy doll is 18" tall with dark almond-shaped eyes that open and close. She has straight black hair that can be brushed and styled to show her earrings." (She can also be dressed in a red cheongsam that's sold and labeled as "Ivy's New Year Outfit.")

And then, most notably to me and many folks who grew up in the '80s and '90s, we find the phrase nestled in every boilerplate description of The Baby-Sitters Club's Claudia Kishi, the token Japanese-American character. (If you were an Asian-American kid like me, you probably wanted to be like Claudia, who was one of the only, if not few, cool almond-shaped eyed gals in popular culture.) 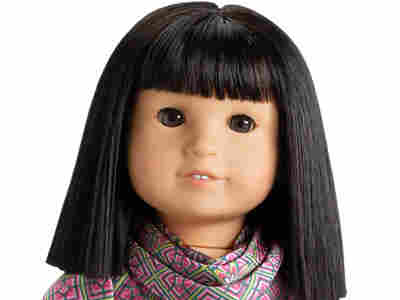 For $110, you can buy a doll of Ivy Ling — "Julie's best friend" — and her "dark, almond-shaped eyes that open and close." American Girl hide caption

Claudia's physical description would inevitably go something like this, as excerpted from The Baby-Sitters Club: Dawn Saves the Planet:

"It's not hard to spot Claud. She dresses in ultra bright colors that look great with her jet black hair. She likes to wear outrageous earrings and hair ornaments that she makes herself. Claud is Japanese-American and has beautiful dark almond-shaped eyes and perfect skin, which is amazing to me because she's an absolute junk food addict."

So to be clear: The phrase emerged as a poetic description intended to capture what was perceived as the exotic beauty of Asian eyes. But now, it's a full-on cliché in and outside of literature.

Type a variation of "almond eyes" or "almond-shaped eyes" into YouTube's search bar and you'll be bombarded with video tutorials on how to make your eyes nut-shaped with a stick of eyeliner and some eye shadow. (Translation: How to make your eyes seem decidedly more "Asian" or "exotic.")

Some folks think that it's a positive thing to have eyes shaped like hard-shelled fruits, despite the phrase's exotic, meandering past. But I'm not so convinced.

Suggestions? Let us know in the comments.