Accessibility links
Did The NAACP Learn Anything From Meeting With The KKK? : Code Switch Here's a front-row seat to a historic meeting between the NAACP and the KKK. 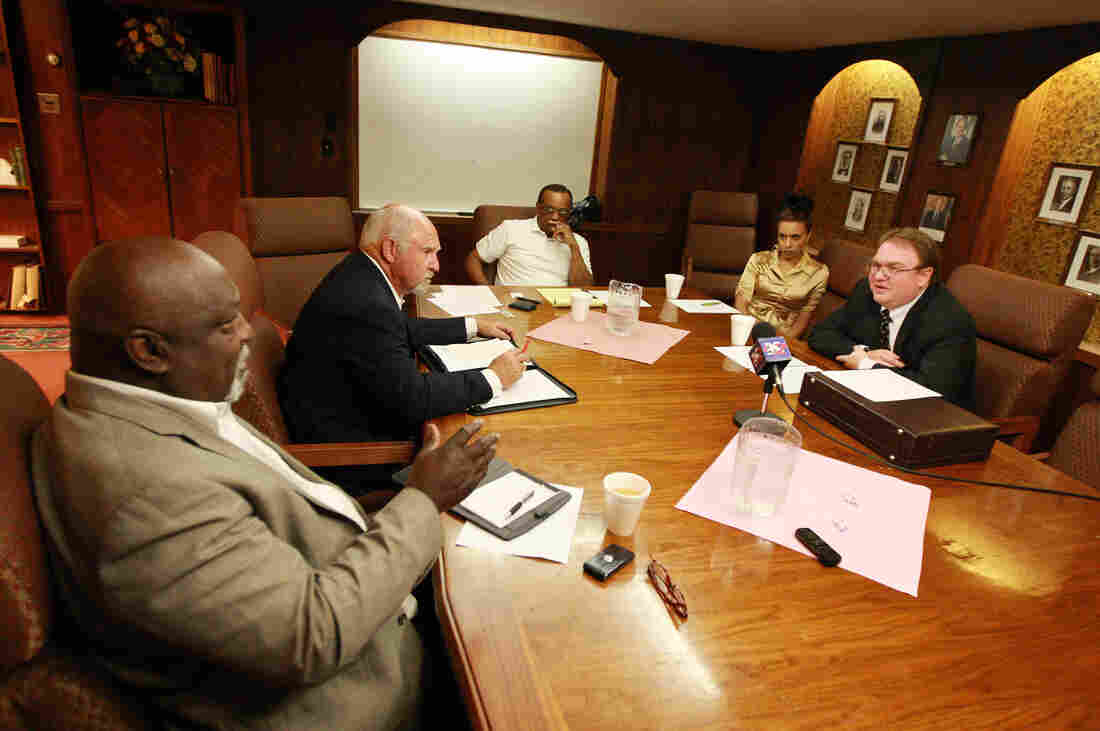 NAACP leaders from the Casper, Wyo., branch speak with members of the KKK at a heavily guarded meeting this past week. Alan Rogers/Casper Star-Tribune hide caption 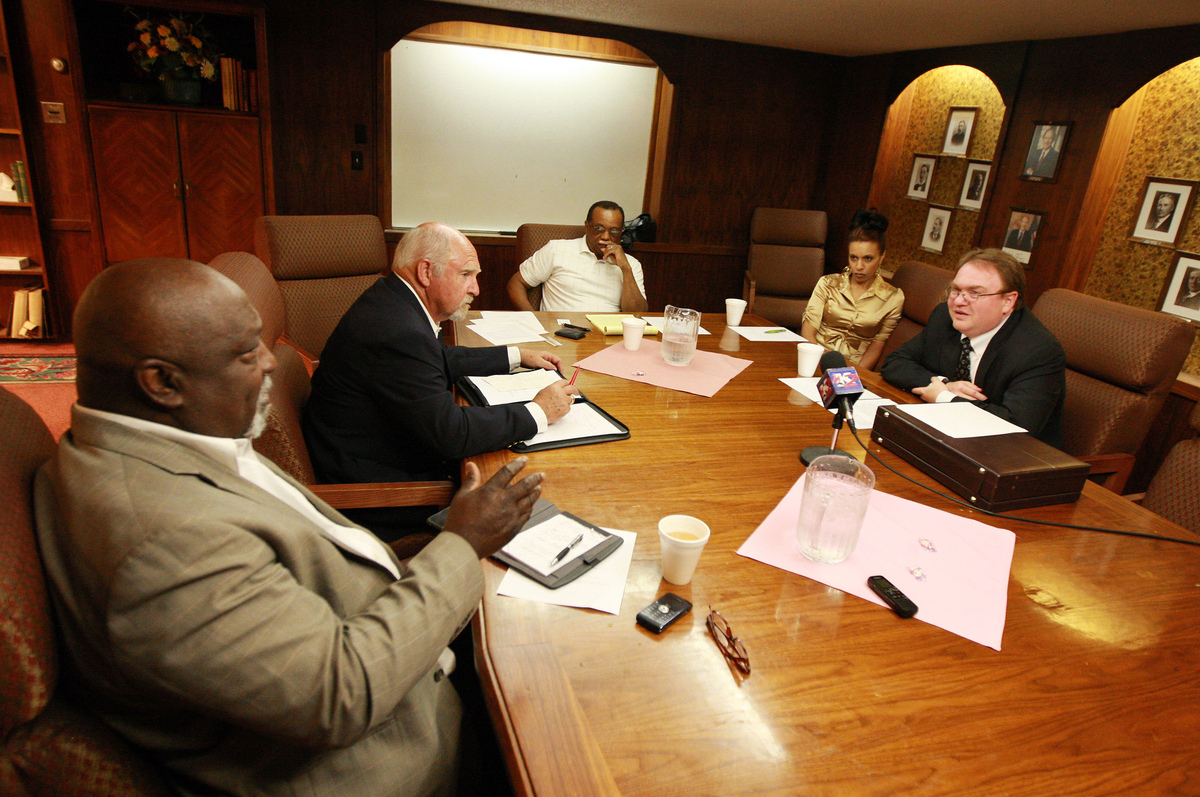 NAACP leaders from the Casper, Wyo., branch speak with members of the KKK at a heavily guarded meeting this past week.

"I think all my first dates were probably less awkward than this," says Jeremy Fugleberg, referring to the NAACP's meeting on Saturday night with the Ku Klux Klan in a hotel conference room in Casper, Wyo. Fugleberg is assistant managing editor for news at the Casper Star-Tribune and reported on the gathering.

The meeting took months to set up. It was prompted by a number of assaults on African-American men in Gillette, a town about 130 miles north of Casper. Jimmy Simmons, the president of the local NAACP chapter, said he was concerned that the attacks might have been racially motivated because the men were reportedly attacked after hanging out with white women. Klan literature began appearing in Gillette. So Simmons negotiated with the Klan for a sit-down meeting with John Abarr, a kleagle in the United Klan of America.

The meeting took place last Saturday night, and Fugleberg was one of the few members of the media invited to attend. He shared his observations with Tell Me More host Michel Martin.

"You had the NAACP on one side of a table. You had the one Klansman on the other. And they swung right into it. There were certainly some pleasantries at the beginning, and the next moment, we were talking about interracial marriage, and [John Abarr] would come out and say things that were completely consistent with his position as a Klansman, but just odd to hear said out in the air, much less in front of leaders of the NAACP."

On whether the NAACP challenged John Abarr on his opinions

Other members there were much harsher on him, saying, 'Look, how can you say that? How do you know that you're not black?'... because they were talking about Klan recruiting and he was insisting, 'I wouldn't let anybody who is black join.'

"They certainly challenged him. Jimmy Simmons, the branch president, he definitely took a lead in almost moderating it ... almost saying, 'Tell me more about that.' Other members there were much harsher on him, saying, 'Look, how can you say that? How do you know that you're not black?'... because they were talking about Klan recruiting and he was insisting, 'I wouldn't let anybody who is black join.' And they said, 'Well OK, so how do you know?' They said, 'Do you subscribe to this 'one drop of blood' process?' and he said, 'Oh yeah, that's definitely how we do it.' And again, of course, the question is: How do you know? 'Oh, I would know. I would know if somebody was black.' And they all laughed at that, because under his standards, that's not necessarily an easy thing to claim."

On what Abarr likes about being in the Klan

"He definitely seemed excited about the sense of belonging that you get from an organization like that, I suppose. He even mentioned at one point ... he almost equated being a member of the KKK to being an historical re-enactor — almost. And ... the NAACP members pushed him on that, and said, 'How do you do that without realizing that you are taking on the form and the character of an organization with the history that it has?' And every time he was pushed on that, he would admit that, sure, there had been some things during Reconstruction, but other than that, he wasn't aware of anything."

On how the meeting ended

"One of the [NAACP] members, Mel Hamilton, took the stance of trying to sum it up, saying, 'You know I'm really not happy with what I'm hearing. I don't think you're aware of your own history, and I don't feel like you're coming here seriously. I don't think you're taking this seriously.' Then [Abarr] was asked near the end, 'So what do you think of the NAACP now, after this meeting?' He said, 'Oh I think ... I really have more respect for the NAACP for having this meeting. I think it was awesome.' And then Mr. Simmons, out of the blue, says, 'Well, would you like to join up? Would you like to become a member [of the NAACP]?' And [Abarr] said, 'Sure. Yeah. I'd have no problem doing that.' And the next thing you know, he was signing the application form to become a member of the NAACP."

On the NAACP's reaction after the meeting

"I don't know that they were ultimately happy with what they heard. They got, maybe, a better understanding of this man's beliefs. But as far as changing something, I'm not sure that happened."