Accessibility links
A War Of Tweets Erupts Over Latest Miss America : Code Switch Following the crowning of Indian-American Nina Davuluri as Miss America on Sunday, some angry Twitter users filled the Internet with racist tweets. But this time, many others fired back.

A War Of Tweets Erupts Over Latest Miss America

A War Of Tweets Erupts Over Latest Miss America 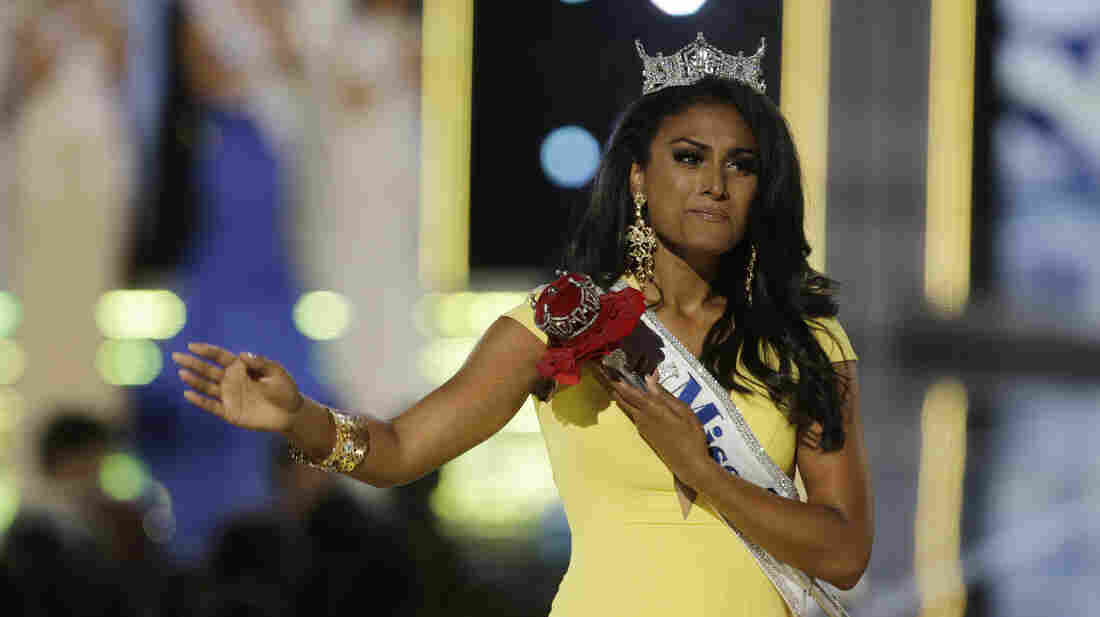 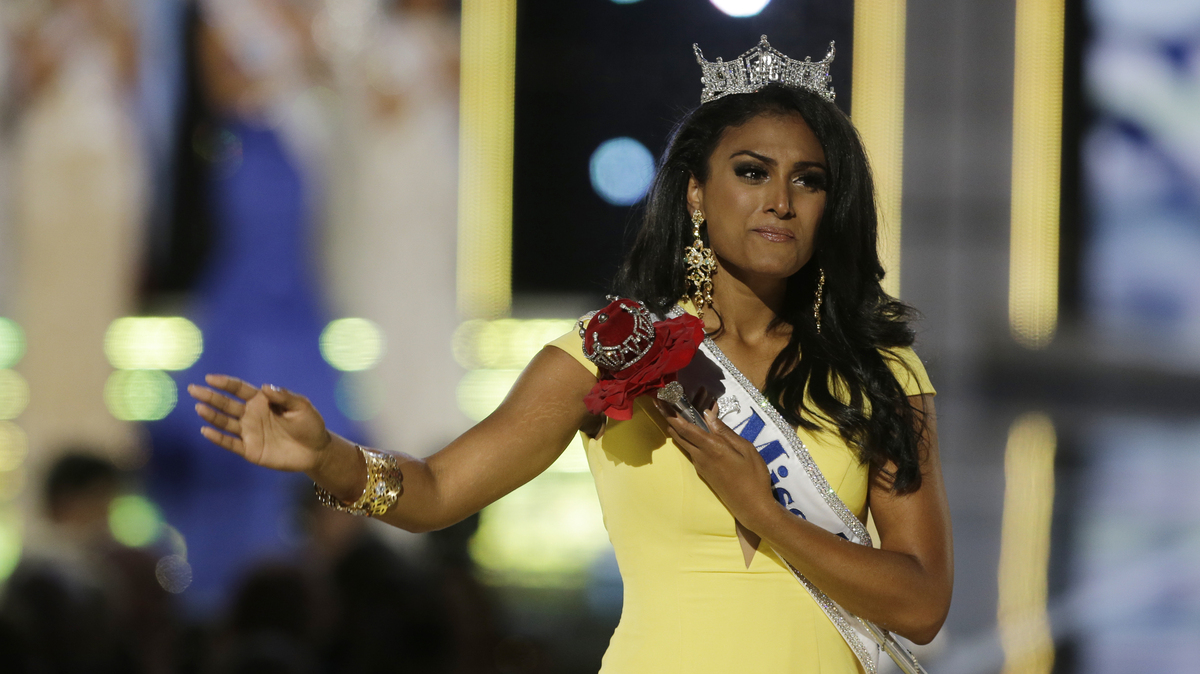 Miss New York, Nina Davuluri, walks down the runway after winning the the Miss America 2014 pageant on Sunday in Atlantic City, N.J.

Editor's note: After the crowning of Nina Davuluri as Miss America, we solicited this commentary from writer Anna John, one of the co-founders of the blog Sepia Mutiny. This post includes several embedded tweets that contain explicit language.

Thirty years ago, African-Americans Vanessa Williams and Suzette Charles were the last two finalists at the 1983 Miss America pageant. It was an electric moment; for the first time in the event's history, the next Miss America was guaranteed to be a black woman. In the three decades since, seven other African-Americans have won the "scholarship pageant," which originally required that "contestants must be of good health and of the white race."

Last night, the 2013 pageant echoed 1983 when the last two contestants onstage were both Asian-American. While there has already been one Asian-American Miss America — 2001's Angela Perez Baraquio, who is of Filipino descent — Sunday's pageant was a striking reminder of how diverse our nation has become. Five Asian-Americans were competing for the crown — the highest number in pageant history — and three of them made it to the top five: Miss Minnesota, Rebecca Yeh; Miss California, Crystal Lee; and Miss New York, Nina Davuluri.

To see two Asian-American women onstage, clutching hands, reveling in a ceiling-shattering moment, was stunning; to hear co-host Lara Spencer agree with Davuluri's comment that "We are making history right here as Asian-Americans" underscored the significance.

I don't understand how you can be up for miss America you're not American you're a fucking dot head!! #MERICA

Unfortunately, many people did not share Spencer's appreciation of this historic development in an all-American ritual.

They weren't the only ones outraged about our new pageant queen. Davuluri's performance, fusing classical Indian and Bollywood dance styles, was also criticized:

These depressingly frequent instances of arguing whether a person of color is American enough to represent our country are tiresome. Whether it is birthers claiming our president is a secret Muslim who wasn't born here or sports fans attacking native New Yorker Marc Anthony for daring to sing the national anthem, some number of Americans feel rage at the browning of America and the ascendance of people who don't "look American."

The outrage and ugliness defy logic and decency. When 11-year-old Sebastien De La Cruz of America's Got Talent fame sang the "Star-Spangled Banner" before Game 3 of the NBA Finals, the Twitterverse exploded with nasty attacks on the boy's heritage and citizenship, with many alleging that he was an undocumented immigrant who "snuck in the country like 4 hours ago."

Yesterday's outpouring of displeasure over a "raghead," "dot head," "terrorist," "Miss al-Qaeda" will not be the last opportunity for racists to vent their resentment and disgust at the ever-increasing levels of diversity in their country. We will keep seeing these "firsts" and they will keep inspiring passionate reactions.

Though we are now used to Indian-American kids dominating spelling bees, apparently it's going to take time before we can accept a young boy in a mariachi outfit singing the national anthem or a dark-skinned Asian-American winning a crown that more often is perched atop blond hair. The demographic changes in America are inevitable, and while some chose to express their loathing over this last night via social media, others participated in a counterwave of protest over the hatred aimed at our new Miss America.

For example, when @monicaamurphyy asked, "Do you not have to be American to win MISS AMERICA anymore?!" she got this reply:

@Jules_liberta @monicaamurphyy I know right!? They've been letting white European foreigners win since the beginning of the pageants!

When @jareddavis32 declared, "Miss America not bein American... that's pretty par for the course for our country now a days," Dylan Ionescu engaged in a conversation with him:

@jareddavis32 don't know if you've read the Constitution, but anyone born in America is American

Other users also shot back:

@pizzo_nick since when are Indian American's terrorist?

It was exactly that sort of pushback that led to many of the most offensive tweets being deleted; there is a growing awareness that racist comments impulsively tweeted are likely to be challenged. Most people don't enjoy being shamed, which is what happened as the worst tweets were favorited and retweeted in a bid to expose those who would flaunt their ignorance.

Such virtual gestures will not immediately change hearts or minds, but getting someone to reconsider their hatred feels like a small victory to go along with Davuluri's larger one.