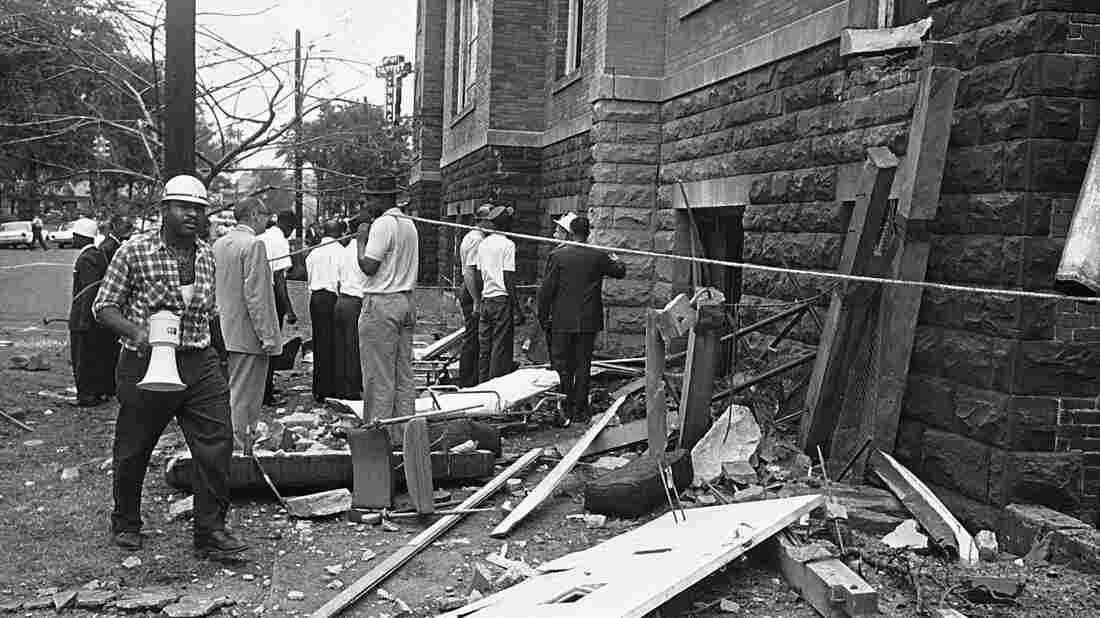 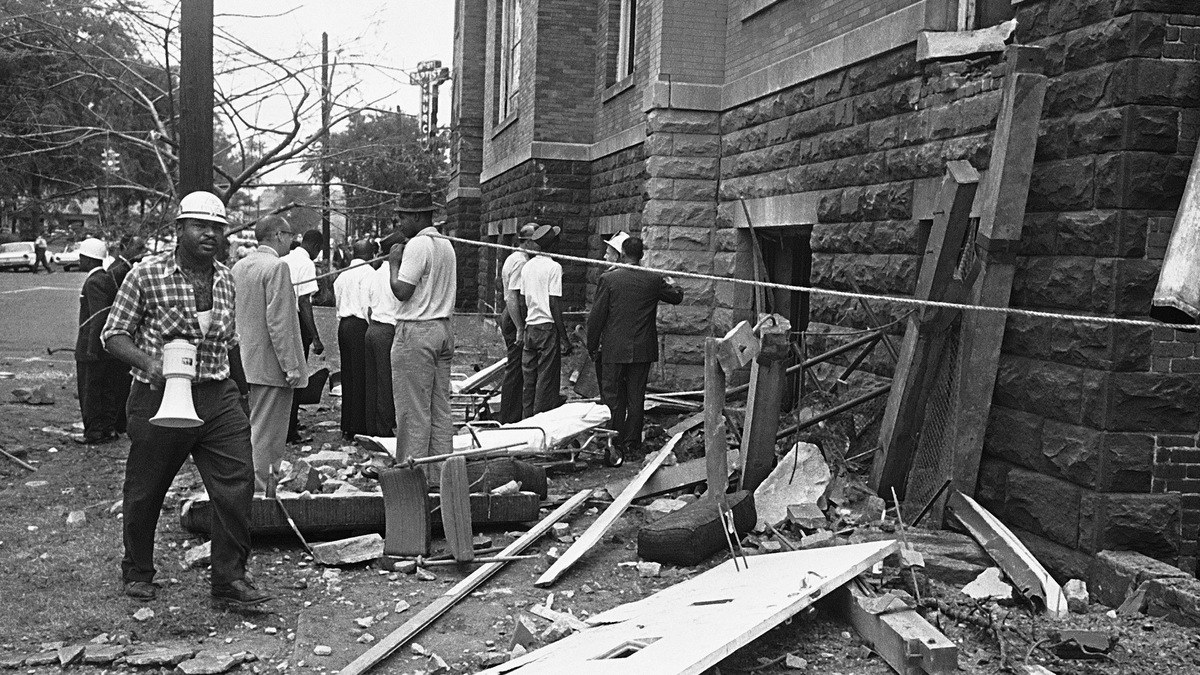 Investigators work outside the 16th Street Baptist Church in Birmingham, Ala., following an explosion that killed four young girls. Three Ku Klux Klansmen were convicted in the bombing years later.

Fifty years ago Sunday, a Ku Klux Klan bomb at a Baptist church in Birmingham, Ala., killed four black girls and sent shock waves throughout the country.

In Birmingham, the tragedy laid bare a deep rift.

"It was Youth Day," she says. "We were excited because that meant we got to do everything. We sang, we ushered, we did everything."

Some of her Sunday school classmates had gone to the ladies' room to freshen up. 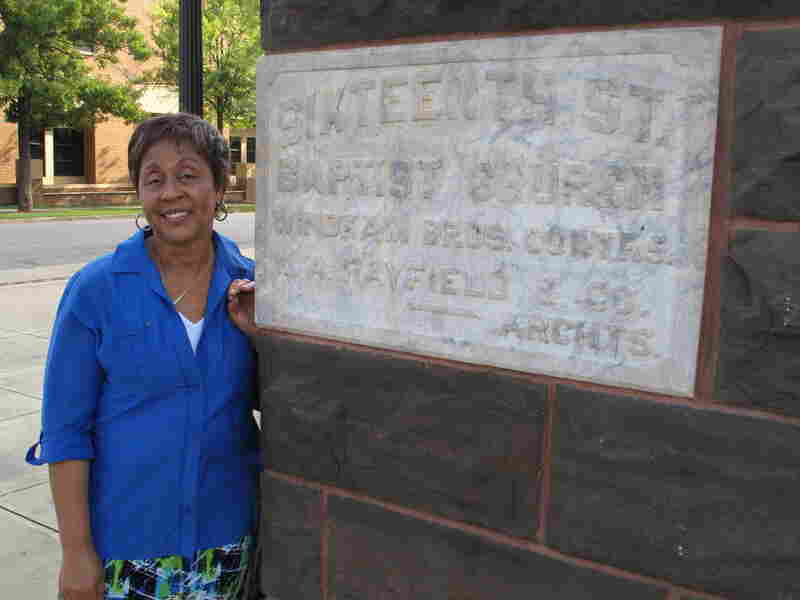 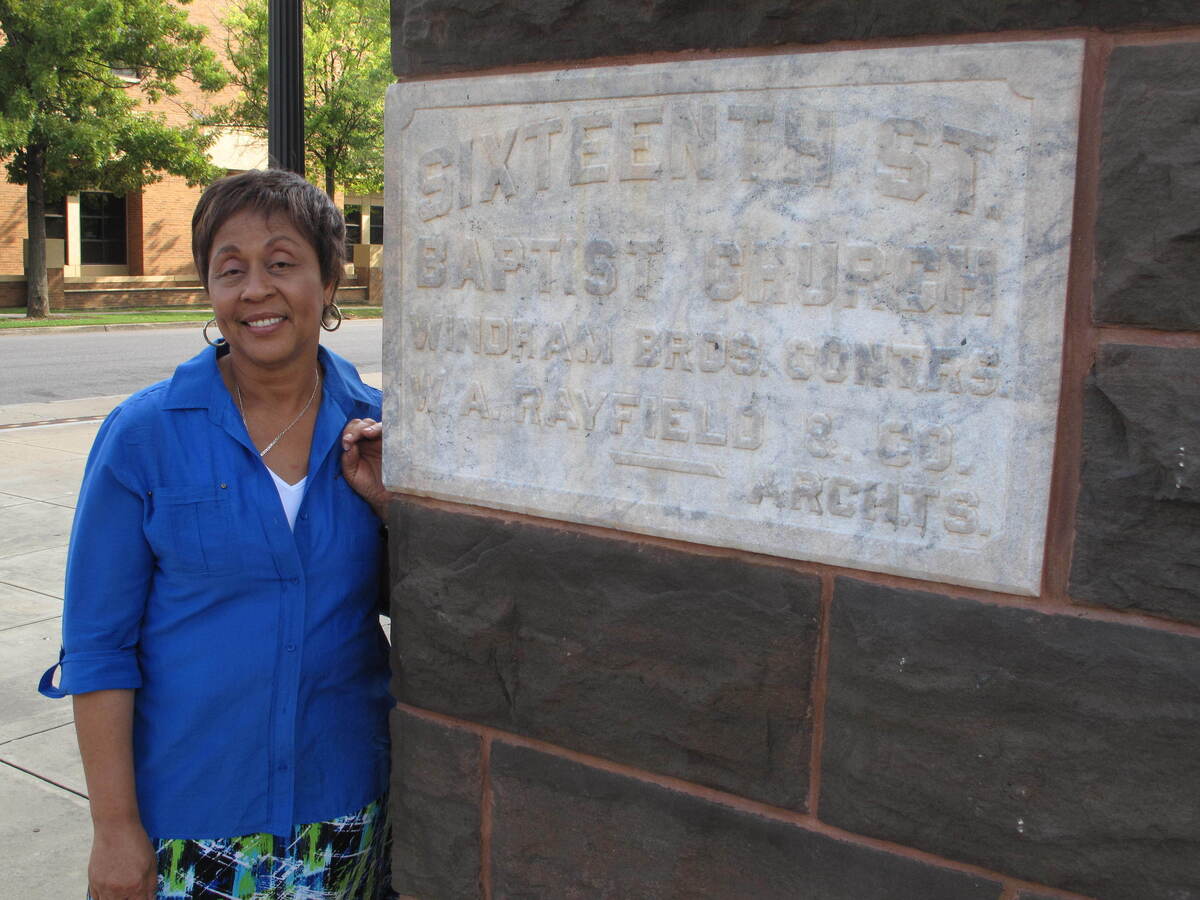 Carolyn McKinstry was a Sunday school classmate of the girls.

"They were combing hair. No doubt they were excited about the fact that it was Youth Sunday. And girls just like to talk and primp, you know."

McKinstry says it was 10:15 when the bomb went off.

"People screamed," she remembers. "Glass was crashing in. And I heard someone say, 'Hit the floor!' "

Later she learned that her classmates in the restroom — Denise McNair, Carole Robertson, Cynthia Wesley and Addie Mae Collins — were killed, and Addie Mae's sister, Sarah, was seriously wounded.

Ever since, McKinstry, now a minister, says she's been on a lifelong journey to fight fear and find reconciliation.

"I really struggled to understand, when our church was bombed, what it was that we were supposed to do differently," she says. "If you're born brown, if you're born white — whatever you're born, if that's a problem for someone, what do you do about that? What do they expect you to do about that?"

While black Birmingham reeled in the aftermath, white leaders scrambled.

"The overwhelming reaction was one of distancing and denial," says journalist Diane McWhorter, who wrote about her hometown's civil rights revolution in the book, Carry Me Home. "And that was the lunatic fringe who makes the rest of us look bad."

"One of the things that really struck me was that the mayor, not even 24 hours after the church bombing, made a statement to the press that all of us are victims and most of us are innocent victims. Couldn't those four victims have had a monopoly on martyrdom?"

The political and business elite worried about further tarnishing the image of the city, already known as "Bombingham" because of its violent reaction to the civil rights movement.

The day after the church bombing, a young white lawyer named Chuck Morgan was scheduled to address a business club. He threw out his prepared remarks, and instead delivered an indictment against his peers.

"Who threw that bomb?" he said that day. "The answer should be, we all did it ... It's every little individual who talks about 'the niggers' and spreads the seeds of his hate to his neighbor and his son." 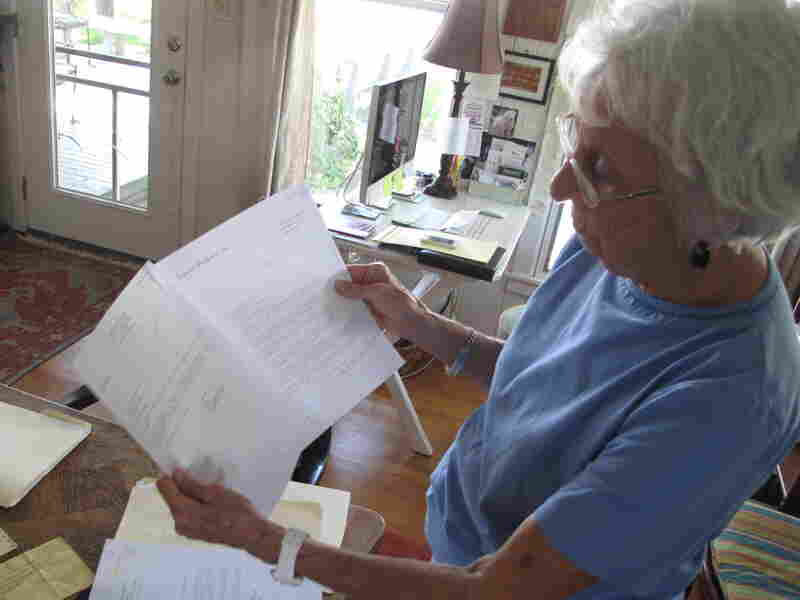 Camille Morgan holds threatening letters her husband received after he criticized Birmingham's white community in the wake of the bombings. Shortly after, Chuck Morgan and his family was forced to flee the city. Debbie Elliott/NPR hide caption 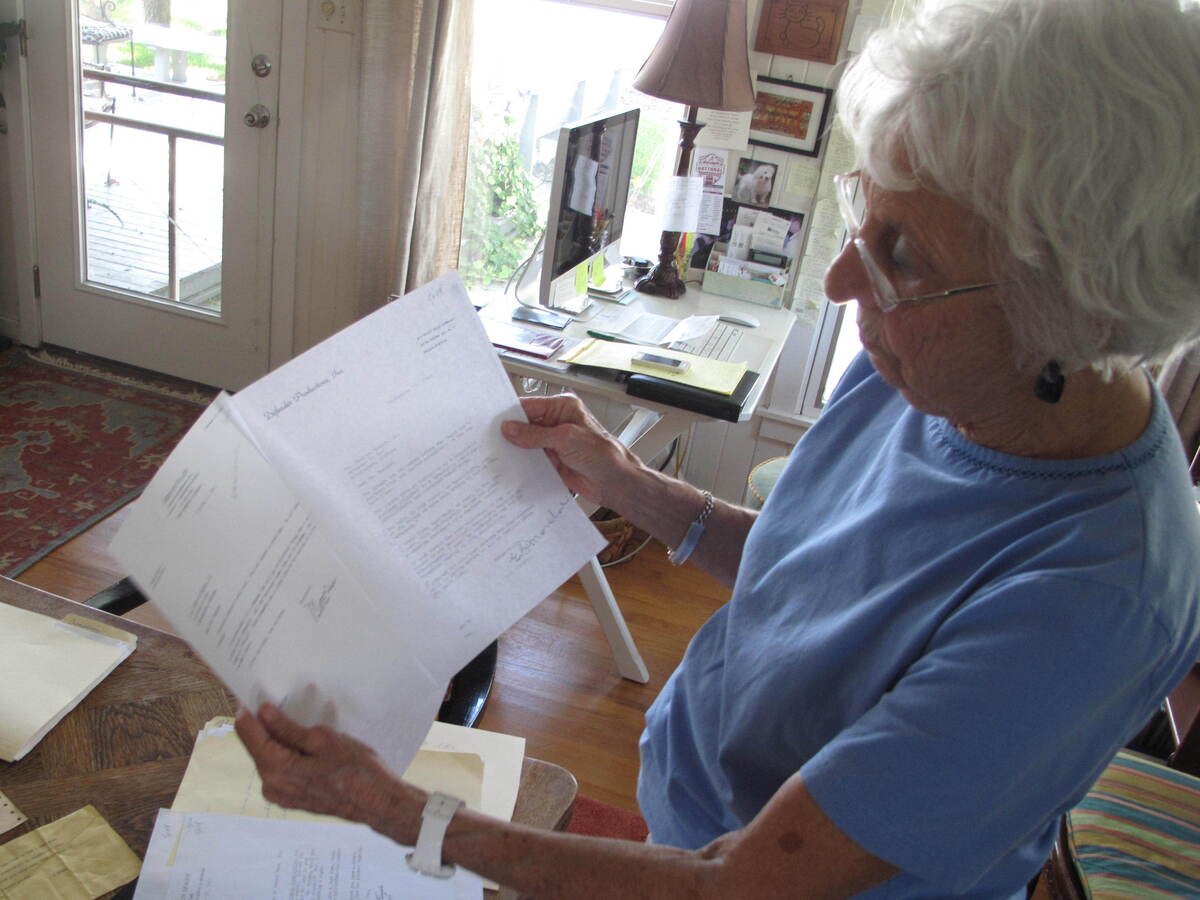 Camille Morgan holds threatening letters her husband received after he criticized Birmingham's white community in the wake of the bombings. Shortly after, Chuck Morgan and his family was forced to flee the city.

His widow, Camille Morgan, says he ended the speech on a sharp note.

The speech was picked up by the national press, and threats ensued. Within two weeks, the couple and their young son had to pack up and flee Camille Morgan's native Birmingham under the cover of night.

Decades later, she discovered a box in her attic, where her husband had collected some of the letters he received at the time.

"You can see this one, 'Dere Chuck' — see how it's spelled?" Morgan says. " 'Since the city is dead, why don't you move afore it happens to you. Iffin you stay here that's what'll happen to you.' Just yucky stuff like that."

But it wasn't only hard-line Klansmen who pushed Morgan out of Birmingham. Journalist McWhorter says her father was one of Chuck Morgan's closest friends.

"When I asked him about it, I said, 'That can't be the same Chuck Morgan that we're talking about, if he was one of your closest friends.' And he said, 'Yeah, doll baby, we ran his ass out of town!' That's it. Just business. Just 'bidness.' "

'This Is The Crucible'

Business is what Birmingham had always been about. The city was founded after the Civil War by industrialists drawn to the region's iron deposits.

Isom, a self-proclaimed reformed racist, says today in Birmingham, blacks and whites have found commonalities — working side by side, eating in the same cafes — but usually retiring at night to communities still divided by race and class. Not unlike other American cities, he says, yet also different.

"This is the crucible where it happened," Isom says. "I think that Birmingham is the place people turn to when they've got questions about race. They look back here to see how we're doing."

Birmingham businessman Jeff Drew was a classmate of three of the murdered girls.

"I think that in the black community, the 16th Street bombing will always remain a testament of not to fully trust white folks," Drew says. "Our hearts became reserved. We had a new fear of white violence. Because if you will stoop that low, to kill children in church, then is there anything else that you couldn't do?"

Back at the 16th Street Baptist Church, McKinstry says out of the tragedy has come a redemptive force.

"I think that the world began to change with the shedding of the innocent blood of these girls," she says.

Their lives are now celebrated with a new sculpture of the young victims at the park across the street from the church. The inscription: "A love that forgives."

" 'A love that forgives,' " McKinstry says. "That would have been the title of the pastor's sermon September 15th [1963]. He never got a chance to preach that sermon."

Now, McKinstry says, it's up to the people of Birmingham to preach it — and live it every day.

In our story, Birmingham, Ala., attorney Chervis Isom is referred to as a "reformed racist." That description falls short of adequately describing Isom's journey as a young man and neglects to provide a dimension on his change of heart over 50 years ago and the many changes that have taken place in Birmingham in the past half century. In Isom's interview with correspondent Debbie Elliott, he explained, "It was hard not to be a racist in those days when that's all you saw and heard," and, reflecting a transition experienced by many people in Birmingham over the decades, he added, "It was a long hard climb for me to come out of that milieu."