Accessibility links
University Of Alabama Moves To Integrate Greek System : Code Switch White sorority members told the school's student newspaper they wanted to recruit at least two black candidates, but their names were removed before members could vote on them. University President Judy Bonner has ordered sororities to use an open bidding process, which allows them to add new members at any time. 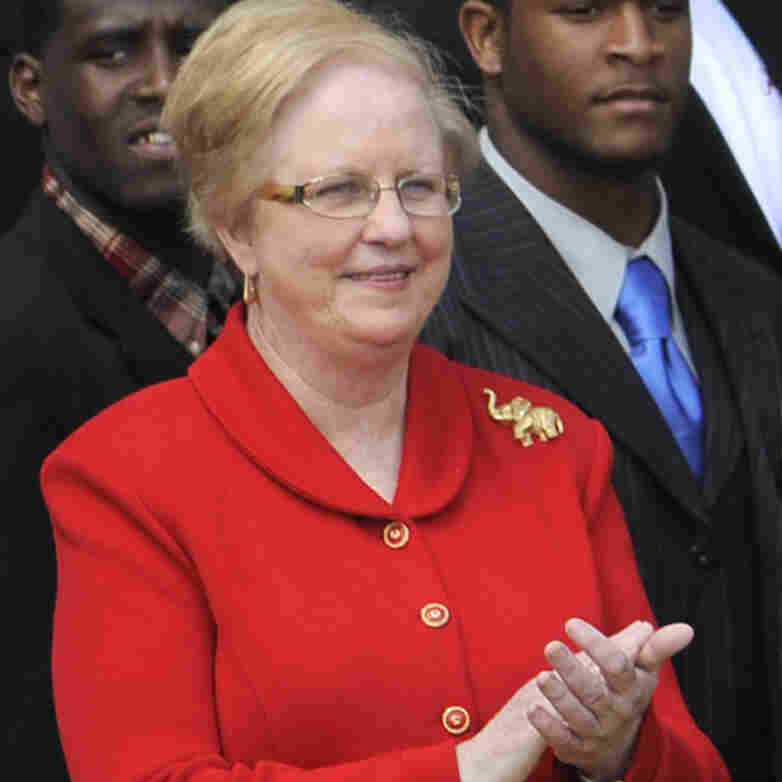 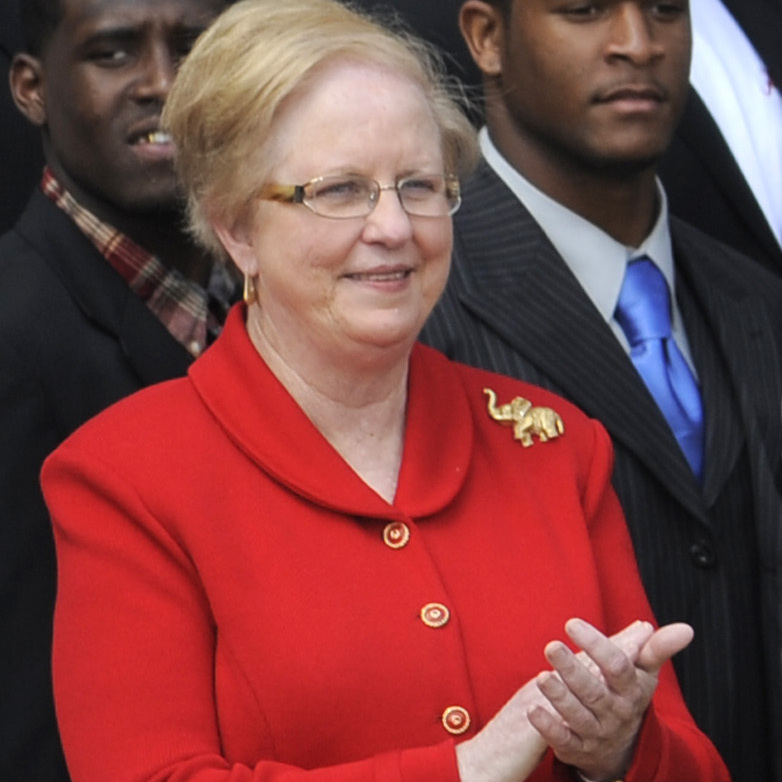 Judy Bonner, the University of Alabama's new president, when the school's championship football team visited the White House on April 19, 2012.

Students at the University of Alabama and community leaders are reacting to allegations that white sororities denied access to black women because of their race.

The student newspaper in Tuscaloosa, the Crimson White, ran a story that quotes sorority members who say they wanted to recruit at least two black candidates but the students' names were removed before members could vote on them.

One of the black women who sorority members say was pulled from consideration seemed the perfect recruit. She had a 4.3 grade point average. And she's from an influential family — the step granddaughter of Alabama Judge John England who is a University Trustee.

"Race may have played a factor or may even been the reason why, though not necessarily from the young people but from some alumni," says Judge England.

He says some alums may have pressured current sorority members to reject black students.

In a video statement posted Tuesday, University President Judy Bonner acknowledged sororities and fraternities remain segregated. She says chapter members admit while recruiting new candidates a few weeks ago, decisions were made based on race.

"While we will not tell any group who they must pledge, the University of Alabama will not tolerate discrimination of any kind," she says.

Bonner ordered sororities to use an open bidding process which allows them to add new members at any time.

Outside the Ferguson Center, the student union on campus, a fountain surges but only seems to add to the sticky September day. Students gather for an impromptu musical performance, and hang out between classes.

Erin Williams, a sophomore from Virginia Beach, Va., says, "What shocks me is that a university, such as the University of Alabama, would, you know, still have this issue going on."

Williams says the university, which once banned African Americans, has made progress. But as the institution celebrates the 50th anniversary of its desegregation, she says it has failed to integrate the powerful Greek system which produces many of the state's political leaders.

"You've got people from the freshman class — they have students from over 77 countries or so. I'm like all these people coming here that love this school and we can't do something as simple as integrate our Greek system. That just baffles me," Williams says.

About 35,000 students are enrolled at the University of Alabama which remains predominantly white. About 12 percent are African American. One fourth of the students are members of fraternities and sororities. 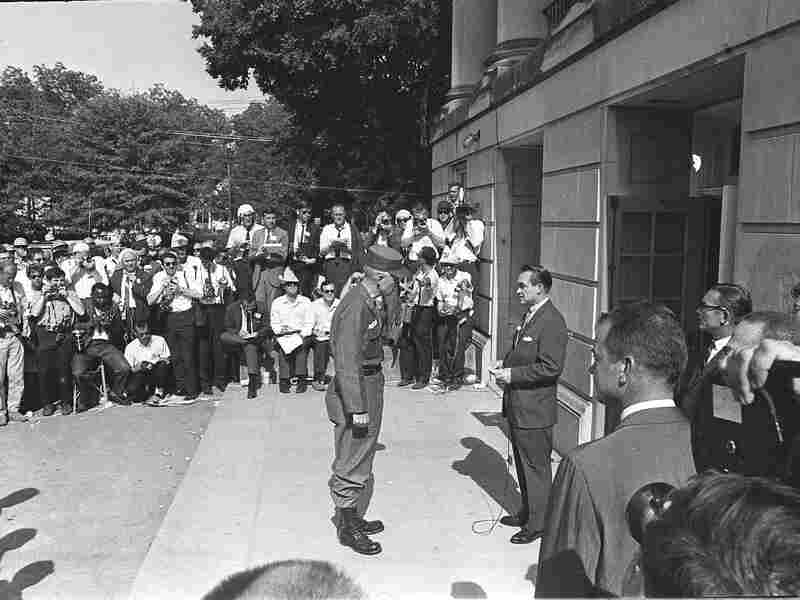 National Guard Brig. Gen. Henry Graham informs Alabama Gov. George Wallace that the guard was under federal control as the two met at the door of Foster Auditorium at the University of Alabama in Tuscaloosa on June 11, 1963. Wallace, who had vowed to prevent integration of the campus, gave way to federal troops. AP hide caption 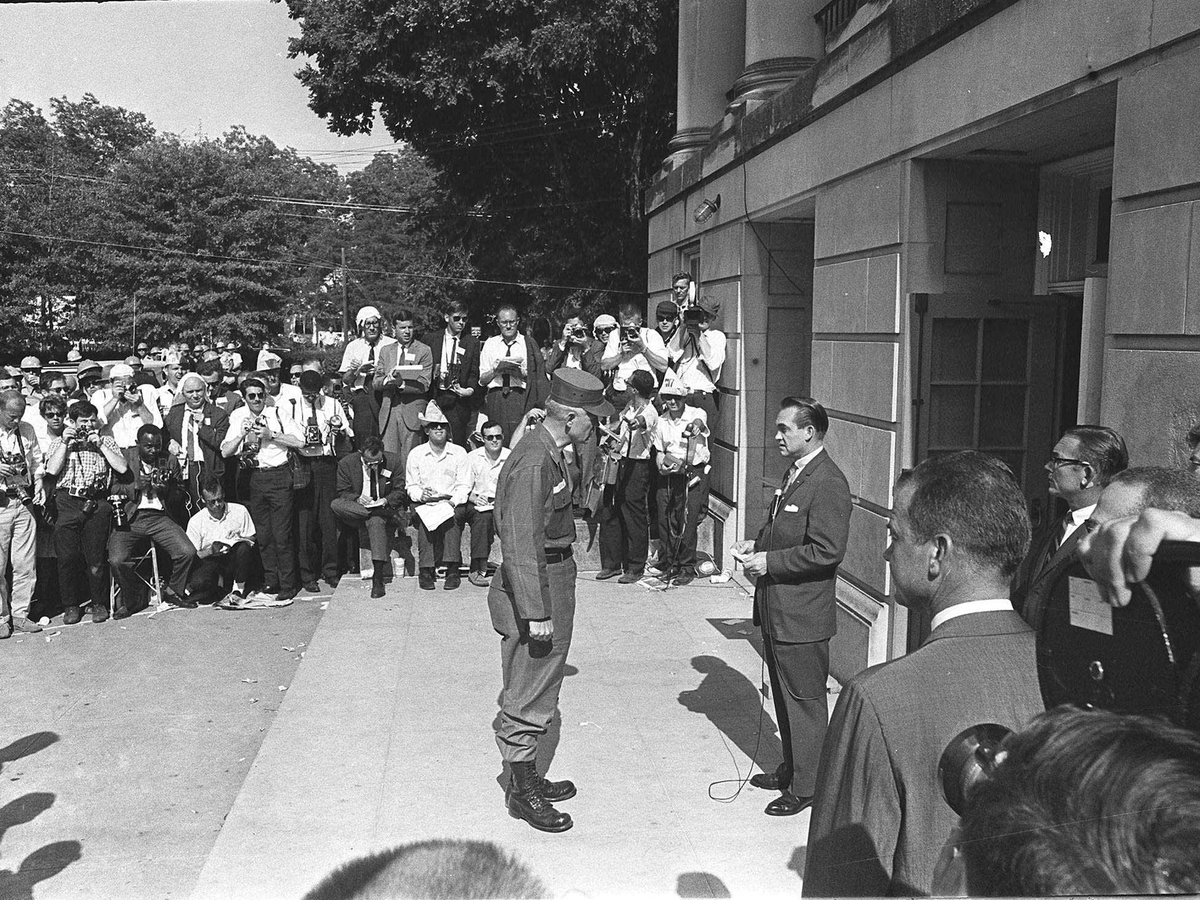 National Guard Brig. Gen. Henry Graham informs Alabama Gov. George Wallace that the guard was under federal control as the two met at the door of Foster Auditorium at the University of Alabama in Tuscaloosa on June 11, 1963. Wallace, who had vowed to prevent integration of the campus, gave way to federal troops.

Taylor Coar, who's from Birmingham, says segregation in the Greek system has been an issue for years.

"There are some people who want to see a change but are too scared to make it, who won't step forward and say what they think. But that's what we need. We need someone to step forward and say, 'I don't like the way this system is being run and I don't think that it's fair', Coar says."

Some at the university are bringing students together so they can talk to one another.

"I can't go five steps without hearing another student talk about how important this is to them," says Lane McLelland, director of the Crossroads Community Center on campus.

McLelland is teaching a new course on a process called sustained dialogue. It's an effort to hold conversations about difficult issues, including race. The University of Alabama is among 25 college campuses that have started these groups.

"Our students are courageous," says Dr. Mark Nelson, vice president for student affairs. "They are very bright. They know they can be better. They are ready for change."

Some here say it is encouraging that the story was published. That includes Judge England, who says it's important students are speaking out against intolerance.

University President Bonner says the nation is watching Alabama — just as it did in the 1960s when then Governor George Wallace made his stand against integrating the university. She says the students are ready to move forward and the university will work to remove any barriers they perceive.