Accessibility links
Duck Eggs And Lotus Seeds: Waxing Nostalgic About Mooncakes : Code Switch Today is the annual Mid-Autumn Festival, a popular Chinese holiday where families typically gather to light lanterns and eat mooncakes. We take a look at some of the myths around the pastry's origins. 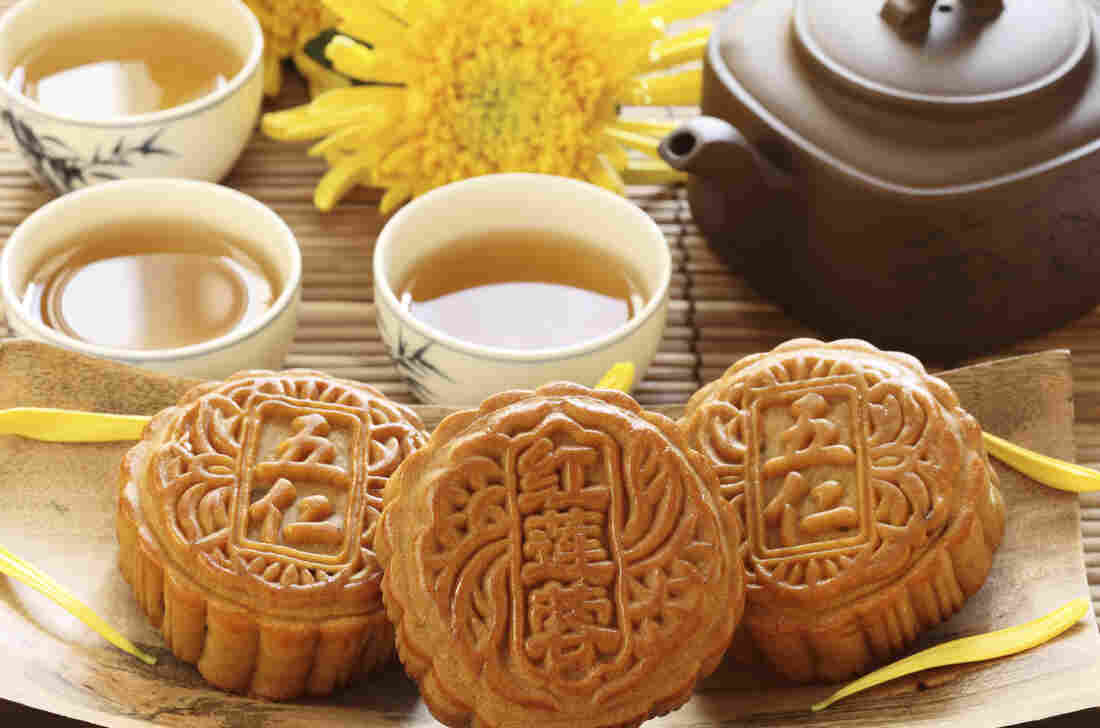 Mooncake fillings are almost always sweet, and can be made with different nuts, seeds or beans. iStockphoto.com hide caption 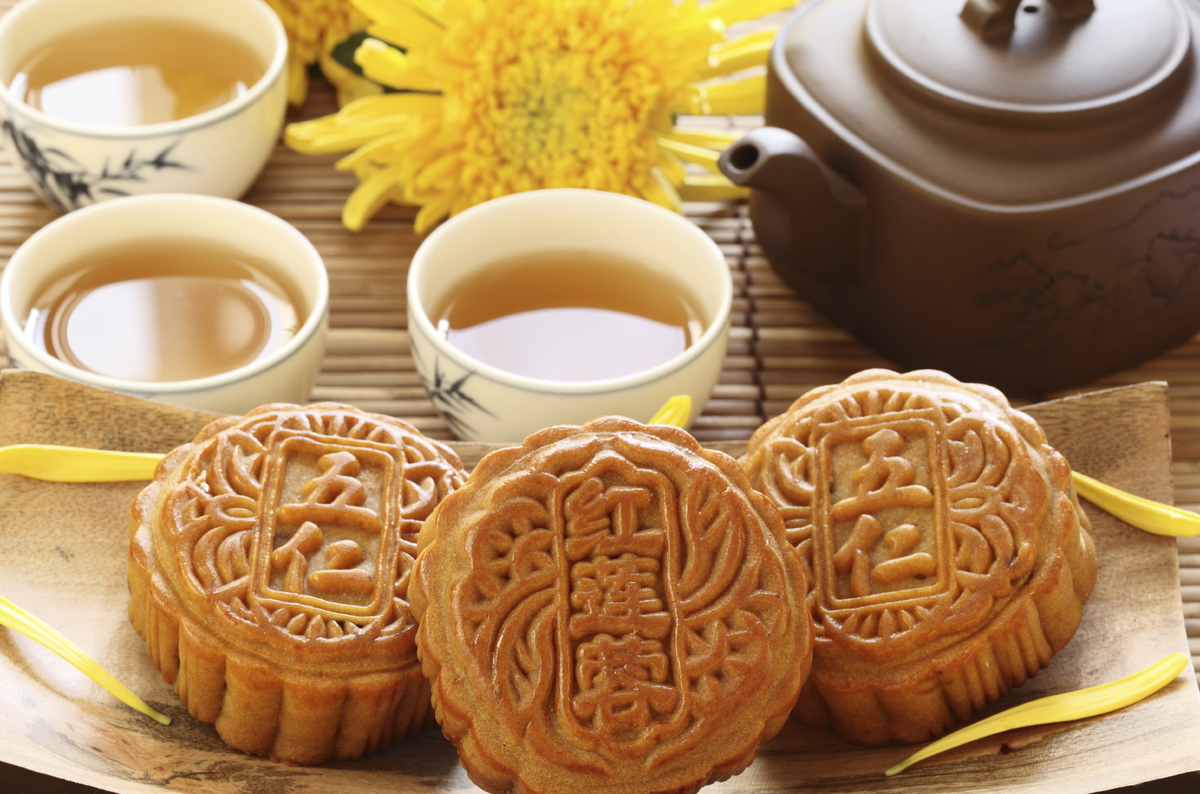 Mooncake fillings are almost always sweet, and can be made with different nuts, seeds or beans.

The little plastic sample tray is empty, but the man behind the counter quickly replaces it with one full of a mooncake cut into teeny-tiny pieces. I grab a piece (OK, a couple) before the jostling crowd behind me can get to it. Samples are, after all, the only reason to visit Costco in the middle of a Sunday. There's a large display of square tins, each decorated with a painting of a Chinese man. I take one back to my mother and ask, "Can we get one?"

The mooncake is traditionally only served during the Mid-Autumn Festival, on the 15th day of the 8th month of the Chinese lunar calendar. They're shared among family and friends as a symbol of wishing prosperity in the coming year. They'll need it, too. A box of four mooncakes generally costs anywhere between $10 and $50 (though more expensive brands can certainly be found), and my parents are usually willing to splurge on the higher end of that scale for their favorite brand.

At home, my family cuts the mooncake into wedges, and we eat crowded around the kitchen counter or bent over the sink to avoid spilling crumbs. I've been eating these pastries since I can remember, and I start craving them right at the cusp of fall, as sunsets get earlier and the nights grow colder.

Mooncakes are about the size and heft of a hockey puck, with a thin crust. A dense rich filling of sweetened lotus seed paste envelops the yolk from a salted duck egg. The salty, crunchy yolk crumbles when cut and contrasts with the almost cloying sweetness around it. The yolk isn't my favorite part, so my mother gets most of what ends up in my portion. Mooncake fillings are almost always sweet and can be made with different nuts, seeds or beans. There's a type known as "five kernel mooncake," which, according to my father, is the Chinese fruitcake that's often gifted and re-gifted to unfortunate recipients.

It's a pretty esoteric food (describing them to friends almost always results in furrowed brows and exclamations of "What are lotus seeds? Wait, a duck egg?!"), and they might seem completely out of place at an American warehouse chain. But I grew up in the San Gabriel Valley, one of the United States' largest and fastest growing ethnoburbs, where many of the cities are majority Asian.

In my particular city, Asian grocery stores and businesses exist next to 7-Elevens and McDonald's on streets with names like "Las Tunas" and Del Mar." Instead of a Starbucks on every corner, we had boba, or bubble tea, a Taiwanese tea drink that has chewy tapioca pearls at the bottom. (The song "Asians Eat Weird Things" was filmed in the Asian supermarket where my family shopped weekly. It's a point of pride that I can say I've eaten most of the featured foods.) It made such sense that Costco — the place where you could find almost anything — would also have mooncakes that it was almost unsurprising to suddenly find them among the granola bars and trail mix. 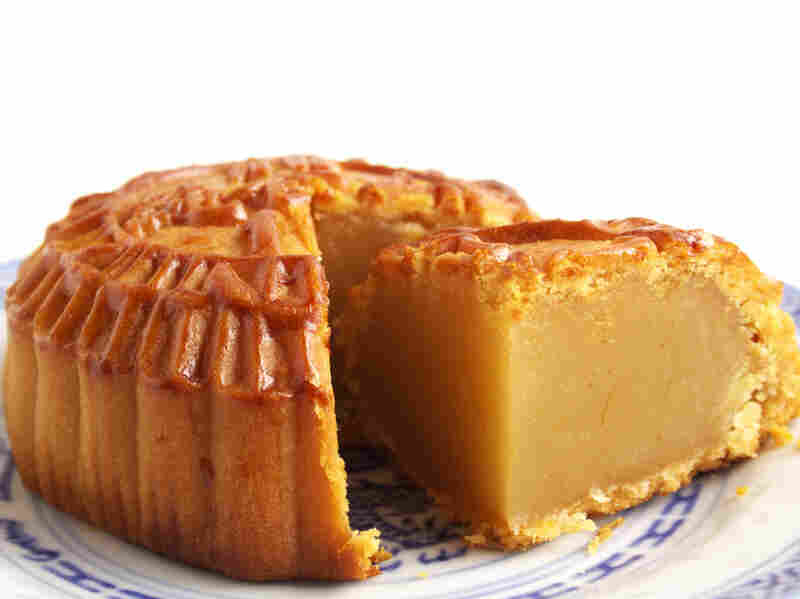 Don't let this close-up confuse you; mooncakes are actually the size and heft of a hockey puck. iStockphoto.com hide caption 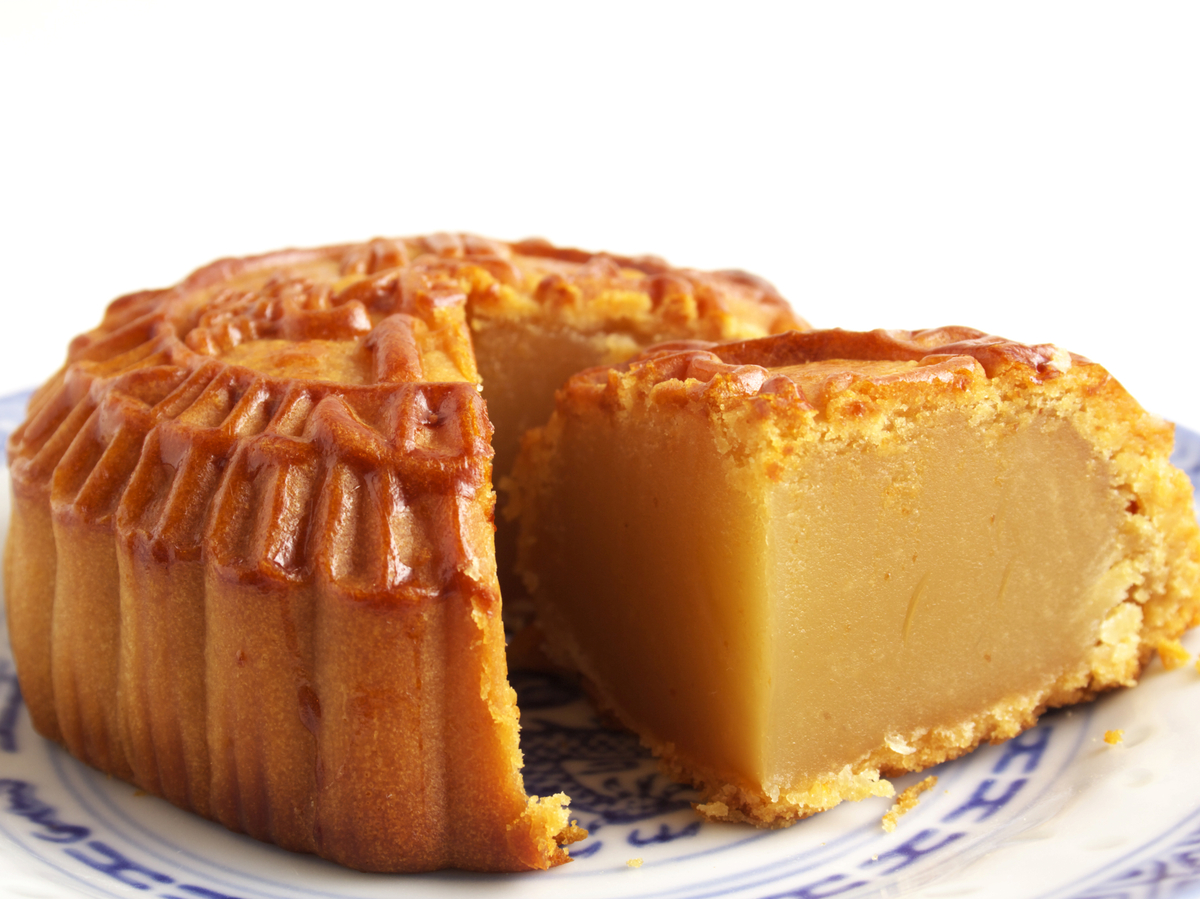 Don't let this close-up confuse you; mooncakes are actually the size and heft of a hockey puck.

The Mid-Autumn Festival is a public holiday in China, and it's customary to give mooncakes as gifts. Chinese Haagen-Dazs stores sell ice cream mooncakes, with a mango sorbet "duck egg" in the center. Godiva and McDonald's also have their own takes on the mooncake (no, they're not burger flavored). While I'm curious about, say, Starbucks' "Wild Berries and Cheese" version, I can't imagine being without the lotus seed paste, made from the ground up seeds of the lotus flower, which is my favorite.

It is, after all, a flavor that connects me with my culture. As an ABC ("American-Born Chinese"), I don't observe a lot of Chinese customs, mainly because my parents don't either. Both born and raised outside of China — my father in Taiwan and my mother in the Philippines — neither have strong associations with the traditional festivals. I'm pretty sure we'd forget completely if it weren't for the giant stacks of mooncakes displayed in every Chinese supermarket (and now Costco) for weeks. I had to Google the exact date of the 2013 Mid-Autumn Festival (It's today, Sept. 19).

When I asked my parents about the symbolism or myths behind the mooncake, I got vague answers of "it has something to do with a moon princess." My dad told me to check out Wikipedia in search of answers and later sent me a YouTube video that explained one version of the legend.

(In case you don't have time to watch the video, here's a quick summary: an archer, Hou Yi, shot down 9 of 10 disobedient suns and commanded the remaining sun to rise and set at regular intervals. He was given an elixir of life and had his wife, Chang E, take it for safekeeping. One night, his apprentice tried to take the elixir, and Chang E, fearing it would land in the wrong hands, drank it instead. She rose into the heavens, and her love for her husband drew her to the moon. Every year after that, Hou Yi offered her favorite foods at her altar in a memorial ceremony.)

"I haven't heard this story since I was a kid; I forgot all about the archer and the 10 suns," my father told me, shrugging. "It's because I've been here [in the U.S.] so long. If we were in Taiwan, you'd hear this so much you'd never forget it."

I'm not in Taiwan, though, or China. I'm in the United States, and I no longer live anywhere near a Costco that supplies mooncakes. So as autumn approaches and the weather gets cooler, I'm craving not only the flavors I get once a year but also my family's unofficial tradition of crowding around one of those pastries. It's OK, though. My mother sent me some in a care package the other day, and I'll be sharing a wedge or two with my roommate tonight. Perhaps we'll even eat around our own kitchen counter.