Accessibility links
Student Loan Changes Squeeze Historically Black Colleges : Code Switch Borrowing money from the government to pay for college has become tougher in the past few years. Stricter lending guidelines for federal PLUS loans have forced many students to drop out of historically black colleges and universities around the country. 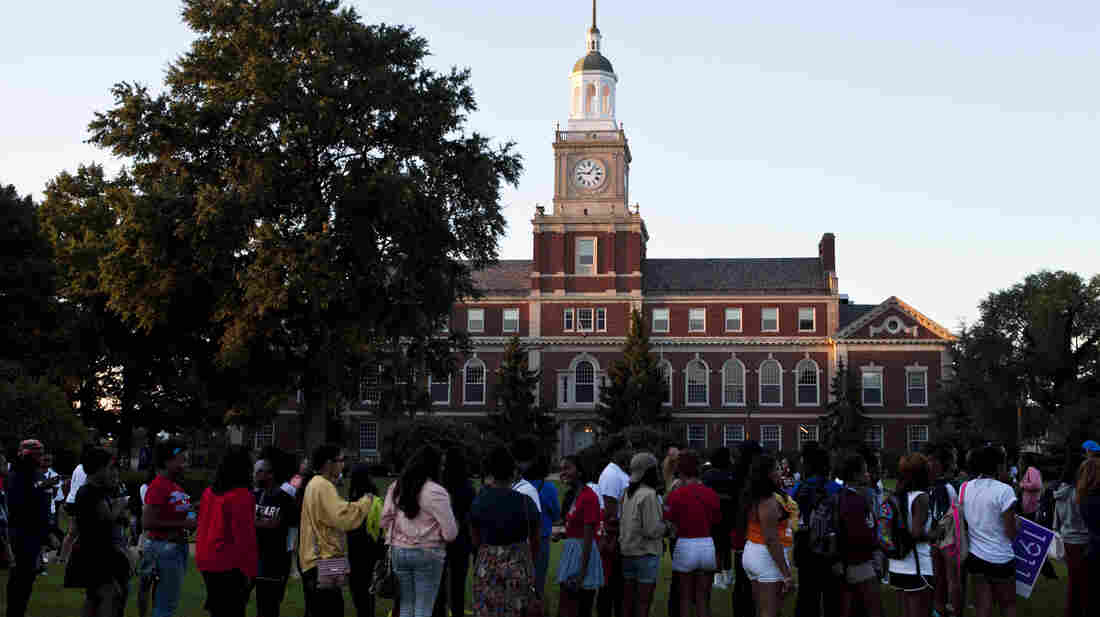 Students and alumni line up at Howard University in Washington, D.C., before August's commemoration of the 50th anniversary of the March on Washington. Nathaniel Grann/The Washington Post/Getty Images hide caption 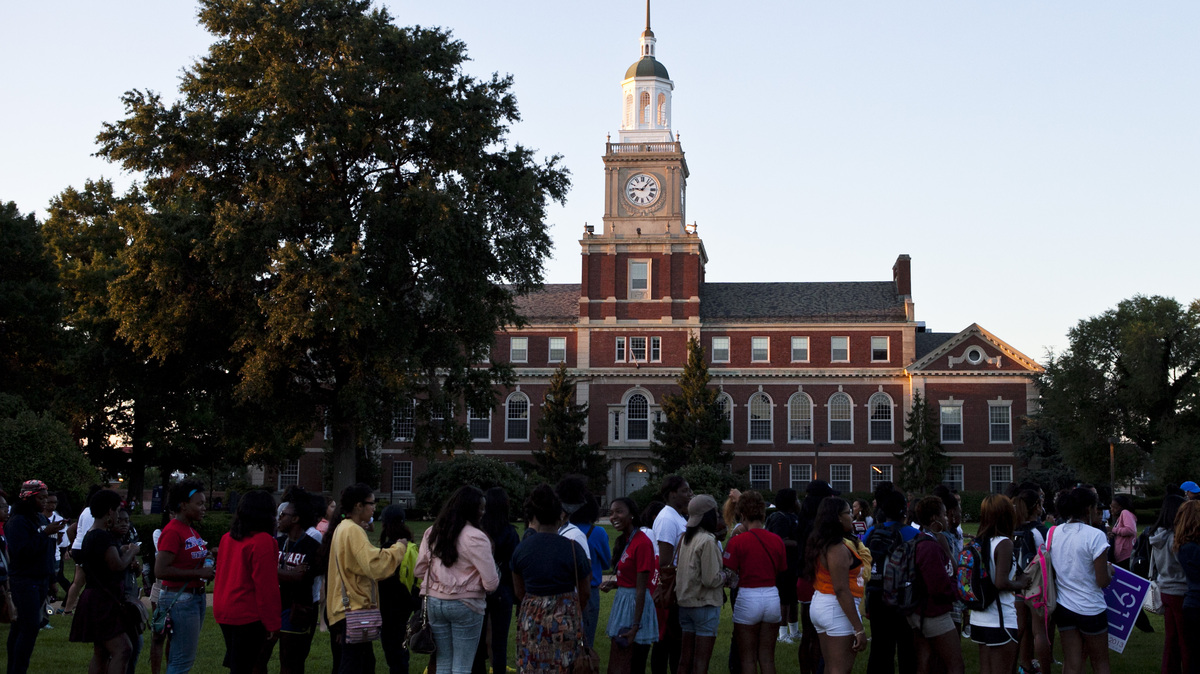 Students and alumni line up at Howard University in Washington, D.C., before August's commemoration of the 50th anniversary of the March on Washington.

Stricter lending guidelines for federal school loans have made it harder to borrow money for college. Changes made in 2011 to the PLUS loan program especially have hurt historically black colleges and universities, or HBCUs, over the past few years.

An increase in Parent PLUS Loan denials contributed to a recent drop in student enrollment at many HBCUs, including Howard University in Washington, D.C. Moody's Investors Service recently downgraded the school's credit rating, citing a dip in full-time-student enrollment by about 6 percent in fall 2012 as one of a number of financial challenges facing the school.

This semester, enrollment numbers have begun to recover at Howard, but many schools, like Morgan State University in Baltimore, are still reeling from recruiting fewer students.

Federal PLUS loans, which are available to both graduate students and parents of undergraduates, help fill the gap for a student's education costs after other financial aid. Applicants are only judged by their credit histories. In late 2011, the government also began checking for any unpaid debts that had been referred to collection agencies or written off.

A Change Of Plans

For some HBCU students, changes to the PLUS loan program have disrupted college plans.

A little more than a year ago, Ashleigh Uzoaru received a letter from Howard University that made her cry.

"I just was ecstatic that I was able to get into the college that I wanted to go to most," recalls Uzoaru, the first of four siblings to go to college.

A Parent PLUS Loan helped pay for Uzoaru's first year at Howard, and she expected to be approved again for her sophomore year. Instead, she received an email denying the loan request this summer.

She's now attending a local community college in New Jersey, which is the more affordable choice, she says. "But the [school's] name is what's going to carry you after you graduate," Uzoaru says. "People are going to [say], 'Oh, you went to Howard! Oh, you went to Georgetown, Yale, NYU,' whatever it [may] be, and [they] put you on a certain platform."

Kevin Carey, who studies education policy at the New America Foundation, says the government's tightening of lending criteria for the PLUS loan program was the right decision.

"The bottom line is there's a reason that any lender, the federal government included, takes into account creditworthiness when making loans. That goes directly to the odds of those loans being paid back," he says.

Still, students at HBCUs are often first-generation college students from low-income families who rely on Parent PLUS Loans to help pay for their education, according to Johnny Taylor, who heads the Thurgood Marshall College Fund, an advocacy group for public HBCUs.

"We talk about accessibility a lot, and in the past, that issue was one of sort of civil rights accessibility, [as in] 'I could not get into said school because I was black or yellow or whatever,' " Taylor says. "Now, the issue is, 'I can't afford to attend these schools,' and [the Parent PLUS Loan] was a tool."

An Apology From The Government

On Thursday, Education Secretary Arne Duncan apologized for how the Department of Education carried out changes to the loan program and the "real impact it has had."

"I am not satisfied with the way we handled the updating and changes to the PLUS loans program," he said at a national conference for HBCU leaders in D.C. "Some have said we are choosing not to reverse the policy because we don't care, and nothing — nothing — could be further from the truth."

On Aug. 27, Duncan told Tell Me More host Michel Martin that the government's priority is to make college more affordable for students, and it doesn't "want folks to be buried in debt that they can't pay back."

In August, the Education Department began reconsidering some denied applications from previous PLUS loan recipients and applicants with "relatively small adverse credit events," such as overdue parking tickets or medical and cellphone bills. The department plans to revisit its lending rules in the spring.

The audio of this story — as did a previous Web version — misstates the current interest rate for a PLUS loan. It is 6.41 percent, not 7.9 percent.