Accessibility links
Why Black Heroes Make Zombie Stories More Interesting : Code Switch From Night of the Living Dead in 1968 to The Walking Dead today, zombie stories with black protagonists have had a societal resonance that makes them stand out in a crowded genre. 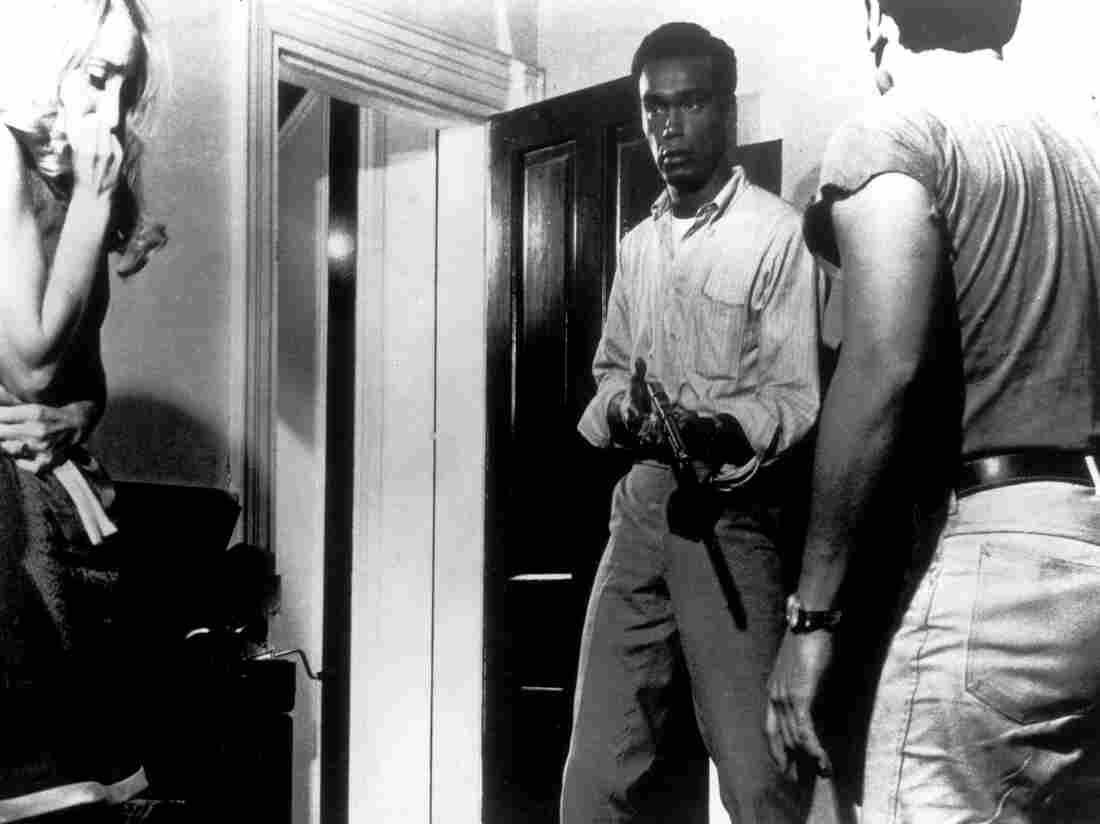 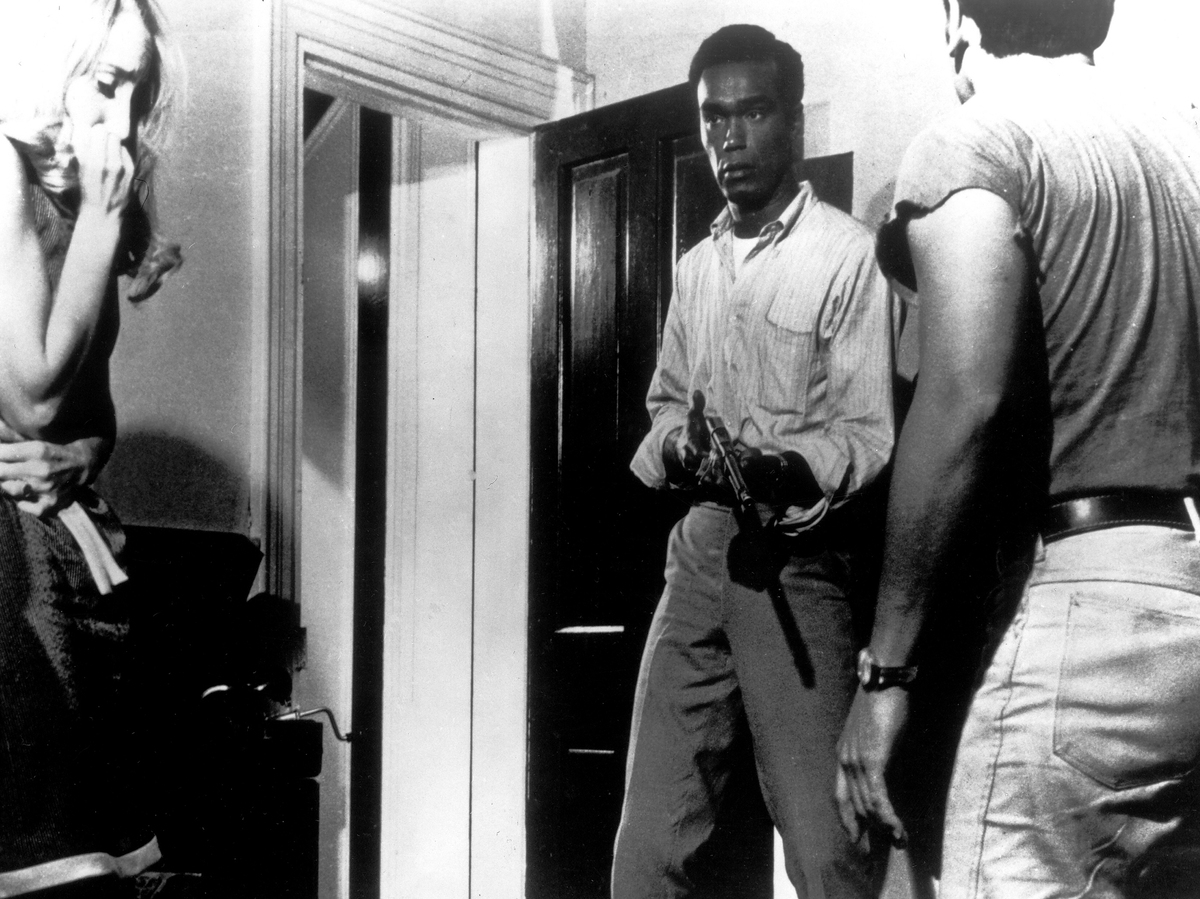 Duane Jones (second from right) makes zombie history as Ben in Night of the Living Dead.

George Romero's zombie masterpiece Night of the Living Dead turns 45 on Tuesday; it was released in theaters on October 1, 1968. Not only did the movie kick-start the modern tradition of zombie movies, it also set the expectation that these stories would be a vehicle for stinging social commentary, from the "merciless" consumer satire of Dawn of the Dead to Colson Whitehead's wake for modernity's demise.

The thing about good zombie fiction (and I say this as someone who enjoys an awful lot of zombie fiction) is that the zombies are never the most horrific thing. Zombies don't typically have the capacity for complex thought — they don't execute stratagems, play politics, torture people. All they do is feed. The true horror in any zombie story worth its salt is what other people do when faced with the zombie threat. Zombies are merely relentless; humans can be sadistic.

Night of the Living Dead created the template. After Ben — the film's black protagonist, played by Duane Jones — rescues the hapless Barbra from the rampaging horde of zombies, he finds himself trapped on a lot with a group of white folks whose behavior ranges from unhelpful to malevolent. Barbra quickly becomes paralyzed by shock, Tom and Judy get themselves blown up, Karen turns into a zombie and starts munching on folks and then Harry locks Ben out of the house before trying to shoot him. Finally Ben escapes, only to be shot by a white sheriff's deputy. Given the backdrop of 1968, it's hard not to read the movie as a commentary on the trials facing blacks at the time. (Romero has said that the night they finished editing the movie, he heard the news of Martin Luther King's assassination.)

According to Joe Kane's behind-the-scenes book about NotLD, Ben was not originally envisioned as a black character. But the casting of Duane Jones in the role gave it a societal resonance that later zombie fiction would strive to recreate:

Many audiences perceived the parallel between America's increasingly violent civil rights struggles — particularly the then-recent assassination of Martin Luther King by racist hitman James Earl Ray, with the suspected cooperation of the FBI — and Ben's execution at the guns of the redneck posse at film's end. Without a black actor in the lead, "Night" would still have been an innovative shocker but wouldn't have hit the cultural nerves it did.

Romero's own complex Latino heritage isn't incidental; he got from his father a sense that arbitrary racial boundaries can create real societal divides:

I'm half-Latino. I'm a New York baby, right? So my Dad is Cuban, my Mom is Lithuanian. My Dad says 'I'm not Cuban!' (George shrugs his shoulders.) But you were born in Cuba? 'I am Castilian, from Spain! Family went to Cuba to open a hotel!' Okay, well, let's say you're a Cuban, you're a Spanish guy? 'Yes, but I am not a Puerto Rican!'

The zombie stories of the past decade carry on Romero's tradition of using the genre for social critique. For example, the evil at the heart of the blockbuster Resident Evil franchise is the shadowy pharmaceutical giant Umbrella Corporation, which brings about the zombie apocalypse while researching bio-weapons. In 28 Days Later, a small crew of human survivors manage to recreate some of humankind's most trenchant problems — racism, slavery, rape — within days of the zombie uprising.

But one of the most popular zombie stories of the moment is the Walking Dead franchise — initially a comic book, then a hit television series, then an award-winning video game. The first two versions of the franchise feature a white protagonist. The hero of the video game, however, is black. And that switch is part of the reason the video game might be the best version of the story.

In the television and comic book versions of the Walking Dead story, protagonist Rick Grimes enters the zombie apocalypse as a sheriff's deputy, concerned above all with keeping his wife and son alive. Rick is capable of ruthlessness, but he's held somewhat in check by the desire to set a good example for his son Carl, whose humanity seems to be gradually succumbing to the amorality of the new apocalyptic world. For my money, the primary emotional engine of the story is the tension between Rick's desire to do what needs to be done, and his desire to preserve some shred of his son's decency and compassion.

In other words, Rick Grimes is the picture of a fundamentally upright man slowly becoming something of an antihero. This works, up to a point. But this is by now such a familiar role for white men (take your pick: Walt in Breaking Bad, McNulty in The Wire, Raylan Givens in Justified, the list goes on) that Rick is constantly overshadowed by supporting characters with more original story arcs. Rick's whiteness is a credential rather than a consideration. It doesn't tend to make characters question whether or not they should follow him, because isn't following white male leaders a thing characters in fiction just typically do? (Don't make me start listing examples here.)

In the video game, however, you play a hero named Lee Everett, a black guy who begins the game as a convicted murderer on his way to prison. The black guy is a murderous felon? You might ask what's original about that? I'll let IGN's Colin Campbell explain why Lee makes such a compelling protagonist:

He is a criminal (convicted of murder, possibly a crime of passion) which puts him in diametrical opposition to The Walking Dead's main character Rick Grimes, a cop. But he's not a bank-robber, or a heartbreakingly damaged product of some grim criminal underclass. He's a professor of history, a smart guy who has, at least theoretically, knowledge of human behavior in extreme situations. He understands what happens when frightened people gather together.

Lee's career, the glimpses we see of his upbringing, the feelings he displays about his past and his reactions to apocalypse make us feel for the character without dumping a truck-load of exposition onto our heads.

The beating heart of the video game is a little empathy machine named Clementine who plays a similar role as Carl Grimes does in the comic book and television series. Clementine is an adorable girl, a multiracial nine-year-old, who manages to pull off innocence without naivete. The Lee/Clementine relationship reverses the Rick/Carl relationship: Clementine's presence constantly forces Lee to preserve his own humanity, hers is never in jeopardy. So rather than an antihero, Lee becomes a fallen man questing for a sort of redemption, which winds up being much more interesting.

The Walking Dead is not some treatise on racism and race in America. Instead, it is the story of one man's attempt to weather the apocalypse while figuring out how to be a supportive father to a young, orphaned girl. In my view, this approach is so much better than an outright reflection on race. We have a well-developed, sympathetic, and complex character whose race is mostly incidental.

But Lee's blackness adds pointed societal echoes to the Walking Dead story just as Ben's does for NotLD. When non-black characters in the story decide whether or not they trust Lee (trust being the most essential human currency after the zombie apocalypse), the racial difference between them stands out as a generally unspoken consideration.

It's amazing that Romero's simple casting decision— making his zombie-story protagonist black — still produces a powerful narrative effect 45 years after it was first done. If the past year of blockbuster zombie stories (The Last of Us, World War Z, Plants vs. Zombies 2) is any indication, we'll be telling these stories for a long time yet. Here's hoping others can continue to build on Romero's example.