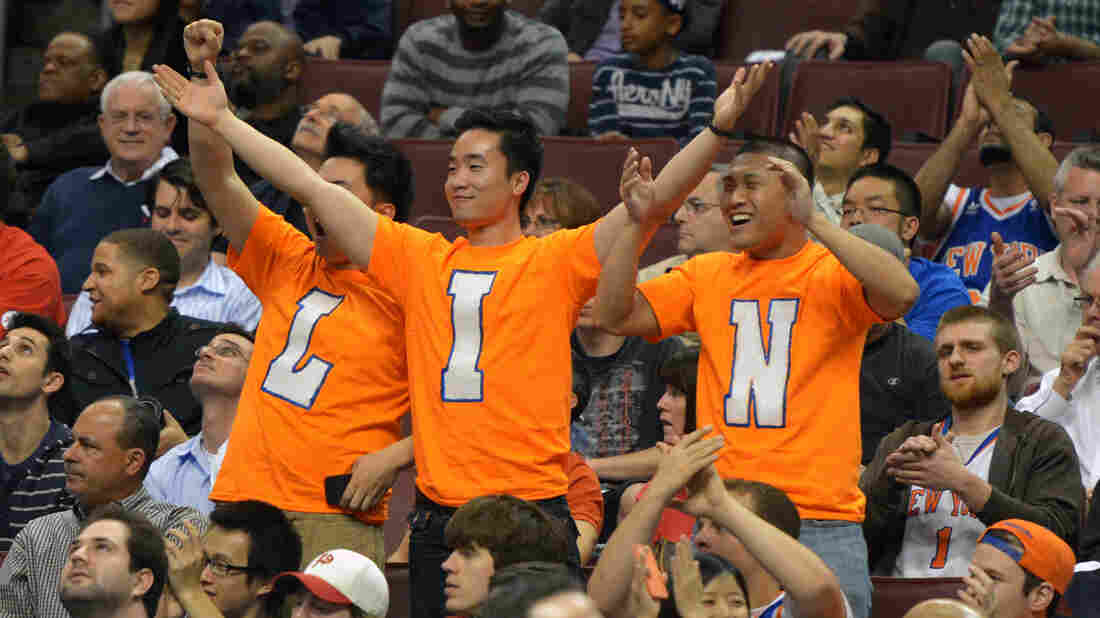 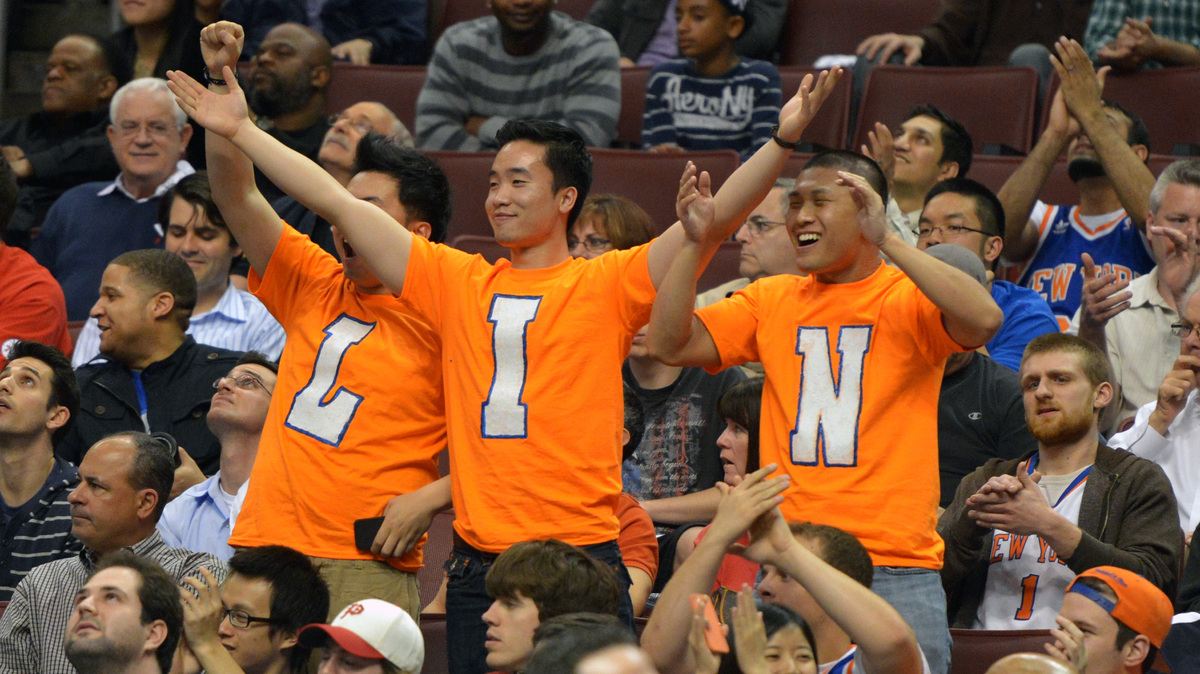 Jeremy Lin fans cheer during a game between the New York Knicks and Philadelphia 76ers in March 2012.

Twenty months after it first took pop culture by storm, the global sports craze known as "Linsanity" has found a revival on screen.

Jeremy Lin's unlikely rise from bench-warmer to basketball phenom is retold in a new documentary called (what else?) Linsanity, which opened in select theaters on Friday. 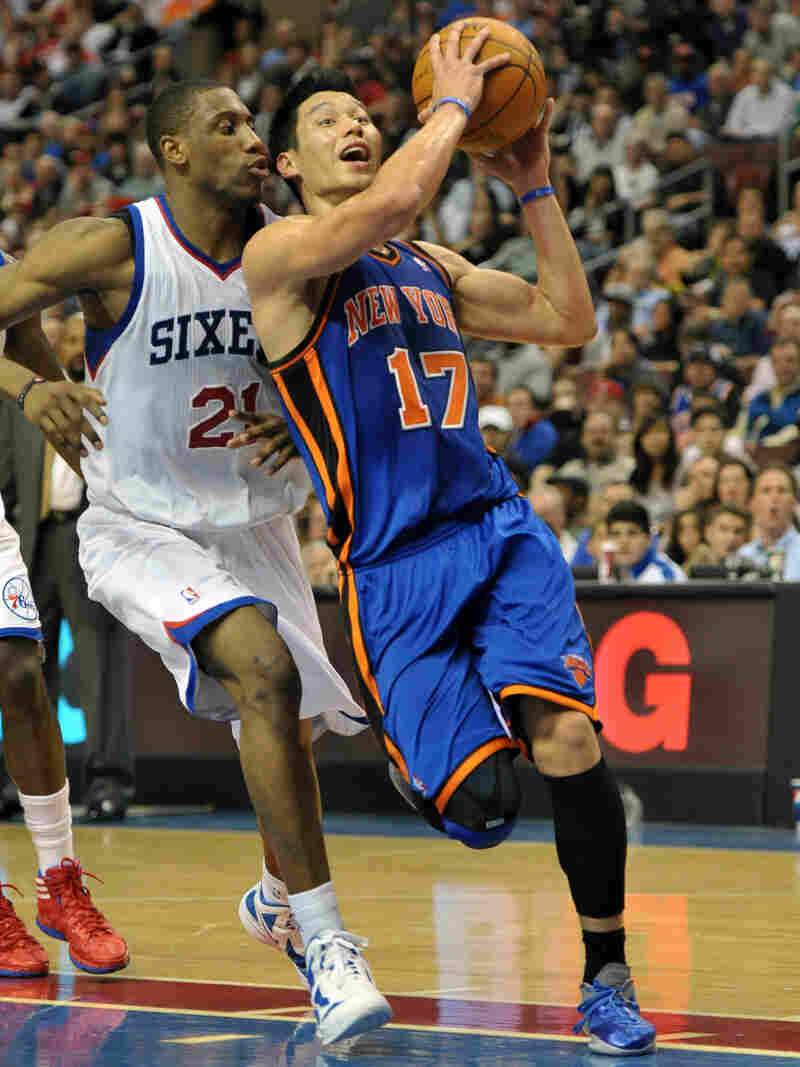 Jeremy Lin drives to the basket during a March 2012 game against the Philadelphia 76ers. Drew Hallowell/Getty Images hide caption 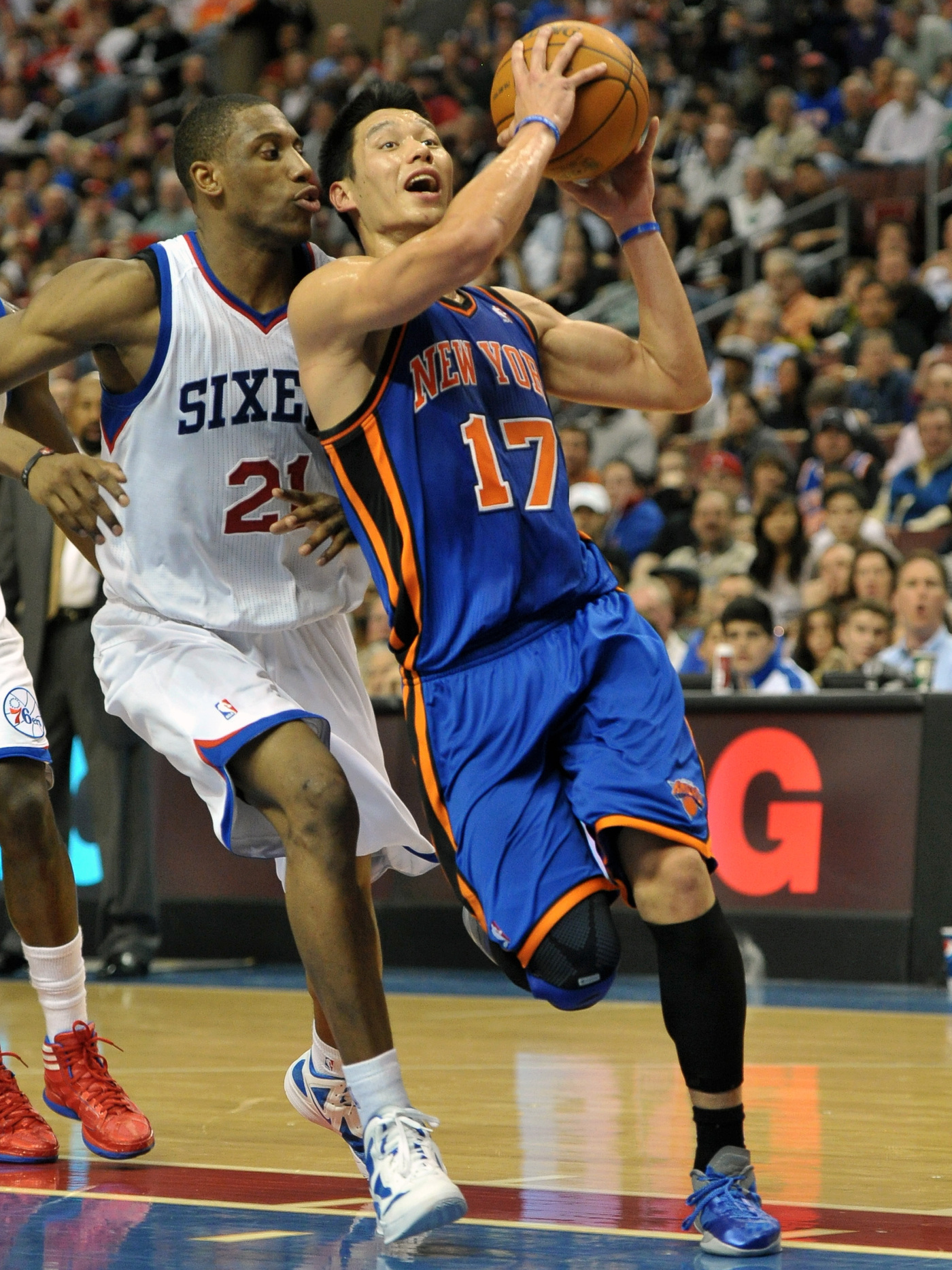 Jeremy Lin drives to the basket during a March 2012 game against the Philadelphia 76ers.

Lin has since traded his No. 17 Knicks jersey for his lucky No. 7 with the Houston Rockets through a contract move last year. His less-than-stellar first season with the Rockets led to some critics calling him "overrated" and "a flash in the pan."

Still, for many Asian-American fans, Linsanity the movie captures a phenomenon that remains an important cultural touchstone.

'A Reflection Of Ourselves'

If two seasons ago is too far back for you to remember the intense public frenzy surrounding Lin, talk to Jenny Yang. The life-long Los Angeles Lakers fan remembers rooting for Lin and cheering against her home team in a game with the Knicks during all the Linsanity.

"[Lin] is the kind of guy that represented so many of us who felt like we were bullied or put down for being Asian," says Yang, a writer and stand-up comic.

Jeff Yang (no relation to Jenny Yang), a columnist for the The Wall Street Journal who writes about Asian-American issues, says part of Lin's draw was that he broke a host of popular Asian stereotypes.

"Asian-Americans are consistently told that there are certain things we can't do," he says. "We 'don't have creativity.' We 'don't have athletics.' And I think Jeremy Lin proved that we can all prove them wrong."

For George Wu, a student at Georgetown University's business school who bought a No. 17 Knicks jersey back in the midst of Linsanity, Lin's success has proven that boyhood dreams of NBA stardom can become reality for Asian-Americans.

"We're glad to have that kind of figure in the spotlight now," Wu says. "You know, it's a reflection of ourselves."

Before 'Linsanity' Was 'Even A Word'

Linsanity director Evan Jackson Leong says he started working on the film back when Lin was a rookie with the Golden State Warriors in 2010. "We started this [documentary] long before 'Linsanity' was even a word," he notes.

Leong says he thought Lin's story could help inspire the next generation of Asian-American basketball players.

The documentary explores challenges that Lin faced as an aspiring NBA player who happened to also be the son of Taiwanese immigrants.

Being Asian, Lin says, proved to be both a blessing and a burden.

That fact has also helped Lin establish strong support from an Asian-American fanbase.

Paul Okada, a co-founder of the fan site JeremyLin.net, says many fans still find Lin compelling because of his consummate underdog story — a skilled player who graduated from Harvard undrafted and was later cut from two NBA teams.

"At every level of basketball that he's played, whether it's high school or college or the NBA, [Lin has] always been underestimated," Okada says. "There have always been doubters and people who have thought that he wouldn't be able to make it at the next level."

Since Lin left the Knicks last year, Okada says he's seen a decline in Linsanity fervor. "Certainly things are less insane than they were when Jeremy was with the Knicks," he says.

"[It's like] when you meet someone new, and you're like, 'They're amazing!' And you're all about them," she explains. "Your stomach gets butterflies."

Eventually that passion fades a bit.

She insists, though, the love for Jeremy Lin is still there.