Accessibility links
In Los Angeles County, It's 'Bark And Hold' Vs. 'Find And Bite' : Code Switch Far too many people in Los Angeles County are being bitten by police dogs — and the overwhelming majority of those are black and Latino, according to a recent report.

In Los Angeles County, It's 'Bark And Hold' Vs. 'Find And Bite'

In Los Angeles County, It's 'Bark And Hold' Vs. 'Find And Bite' 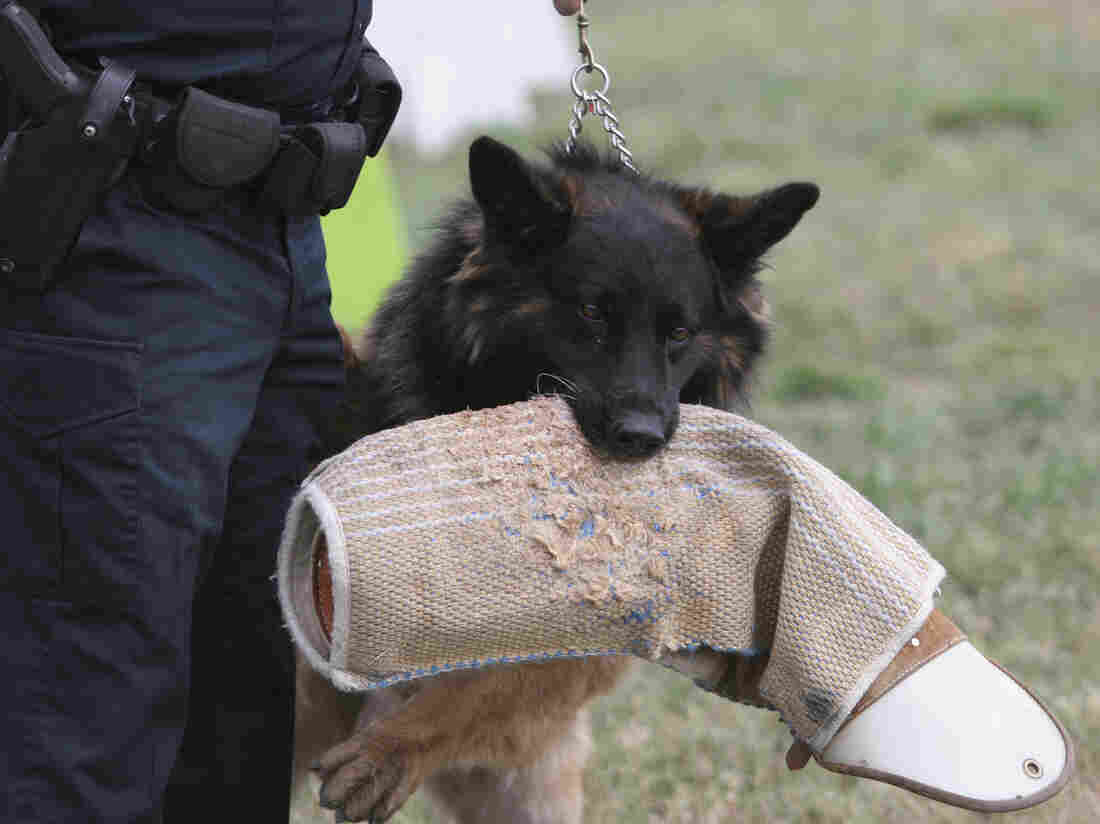 This dog holds the armor it has just ripped from its target until given the release command. Mark Hayes/iStockphoto.com hide caption 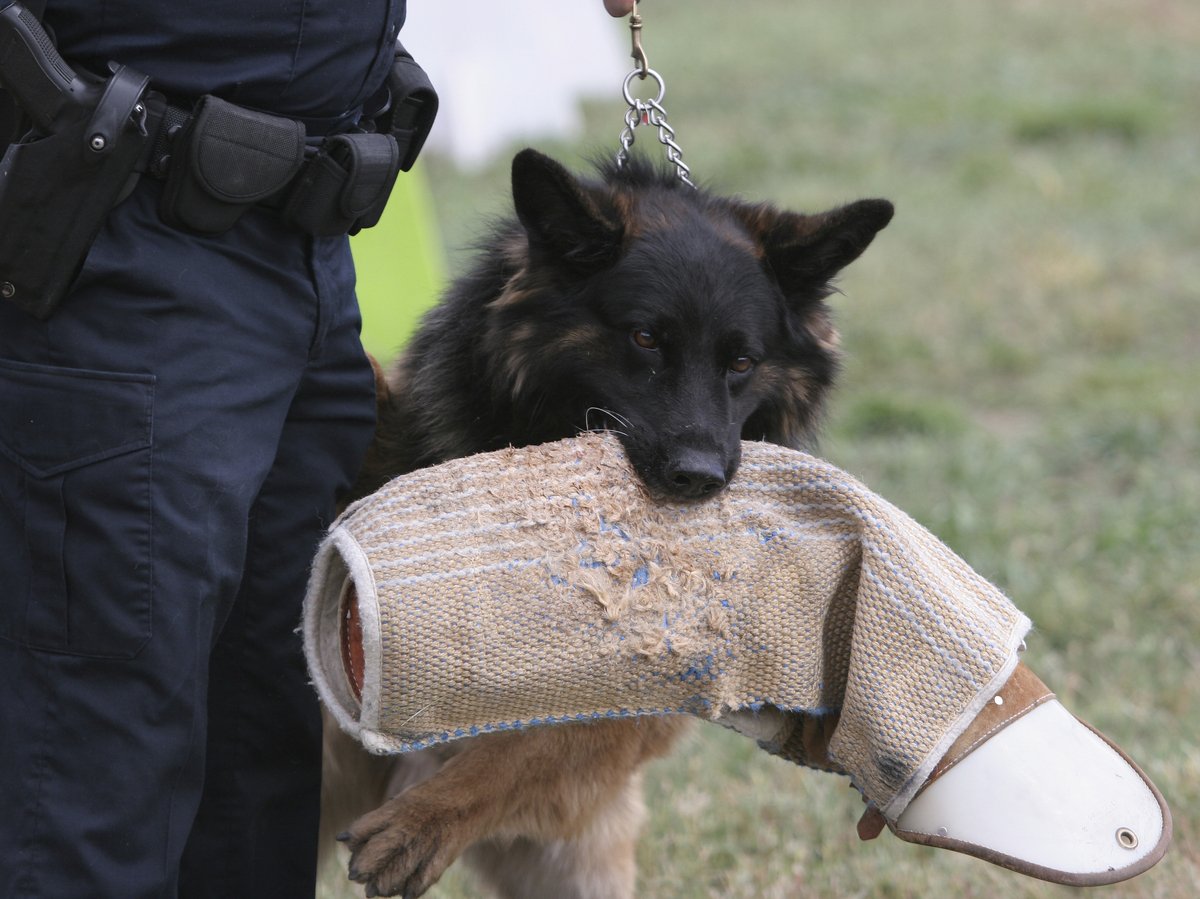 This dog holds the armor it has just ripped from its target until given the release command.

According to the Police Assessment Resource Center*, or PARC, far too many people in Los Angeles County are being bitten by police dogs — and the overwhelming majority of those victims are black and Latino.

In PARC's latest report, released on Monday: "Victims of the dog bites are almost universally African-American and Latino." And while the rates of bites of whites, Pacific Islanders and Native Americans have remained low over the past 8 years, "the percentage of apprehensions involving a dog bite has trebled in recent years."

Alarm over that — and worsening relations between the sheriff's department and many of LA's communities of color — was a catalyst for this most recent report.

The Los Angeles County Sheriff's Department (LASD) is a sprawling paramilitary organization that polices almost 5,000 square miles that range from the affluent communities of Santa Monica and Beverly Hills to the gritty desert cities of Lancaster and Palmdale. The officers are sheriff's deputies, but there's no way they can know everybody who walks down the street: this ain't Mayberry.

Merrick Bobb, executive director of PARC, was first contracted by Los Angeles County in 1992 to assess myriad citizen complaints about the Sheriff's Department — how it's run, where the trouble spots are and what might be done to correct them. The past year has been particularly trying, as the LASD has made national news more than once — most prominently for the abuse of inmates by some sheriffs at the Central Men's Jail, a dangerously outdated facility notorious for its overcrowding and resulting tension.

The LASD's K-9 unit, Bobb believes, is a tool that should be deployed much less often and with much greater discretion. Instead, what he and his staff at PARC are seeing is "a trend to use canines in circumstances where lesser force had been used in the past...We believe that the handlers have been too quick to use dog bites in some situations where other, potentially less damaging force is available."

"Bark and Hold" vs. "Find and Bite": Biting as a Weapon

The protocol of having a police dog run down and corner a suspect ("bark and hold") has given way, Bobb says, to too many instances of canine units biting a suspect and holding onto him until police can reach him. The latter is sometimes referred to as a directed bite. Directed bites result in more injury because of the bite (obviously) and the suspect's struggle to free himself. Bobb's team recommends that the Canine Services Department, which runs the K-9 Unit, "consider winnowing the crimes for which canines should be used."

Kenneth M. Phillips, a nationally-known Los Angeles attorney whose practice is dog-bite litigation says: "Used properly, (K-9s) are great for officer safety. I'm all for it if the dogs are properly maintained as well as trained." But part of the maintenance, Phillips says, has to revolve around making sure the dogs' trainers are properly supervised. He emphasizes that police "dogs are initially trained, but they're not programmable, like computers. You have to keep working with them, on a very regular basis."

PARC isn't interested in compromising officer safety, but says that the risk to innocent civilians must be reduced if the Sheriff's Department wants to improve its relations with the communities where police dog bites have been disproportionate.

It also believes that the penalties for sheriffs who are found to push the envelope on this should receive more than just Education-Based Discipline, (EBD) to correct that behavior. EBD is a training course that is often used instead of administrative leave without pay. The PARC report says that's not enough. They believe the threat of losing pay gets a deputy's attention the way mandatory classroom re-education often doesn't.

In their effort to keep the citizens of LA County safe, PARC's Merrick Bobb says, the great majority of deputies in the LASD do a good job under trying circumstances. But, he says, more attention needs to be given to those who over-use the K-9 units when less aggressive methods would work. And the discipline for being quick to let loose the dogs should have ramifications that are serious enough to make a deputy think twice the next time the opportunity to direct a dog to bite arises.

In other words, Merrick Bobb and PARC want to put some teeth in the corrective measures for deputies who are over-eager to sic their dogs on suspects.

*Note: PARC's job is to support efforts for effective and accountable policing. In addition to working at the local level, the department of justice sometimes contracts with PARC to oversee law enforcement organizations as they seek to comply with consent degrees. (PARC is currently working with the Seattle Police Department on this.)