Accessibility links
A Comedy Favorite: How The 'Act Blacker' Sketch Has Evolved : Code Switch The long-standing thread of comedy pokes fun at the phenomenon of black actors being instructed to "black it up." It's a self-aware take on a modern reality.

A Comedy Favorite: How The 'Act Blacker' Sketch Has Evolved

A Comedy Favorite: How The 'Act Blacker' Sketch Has Evolved 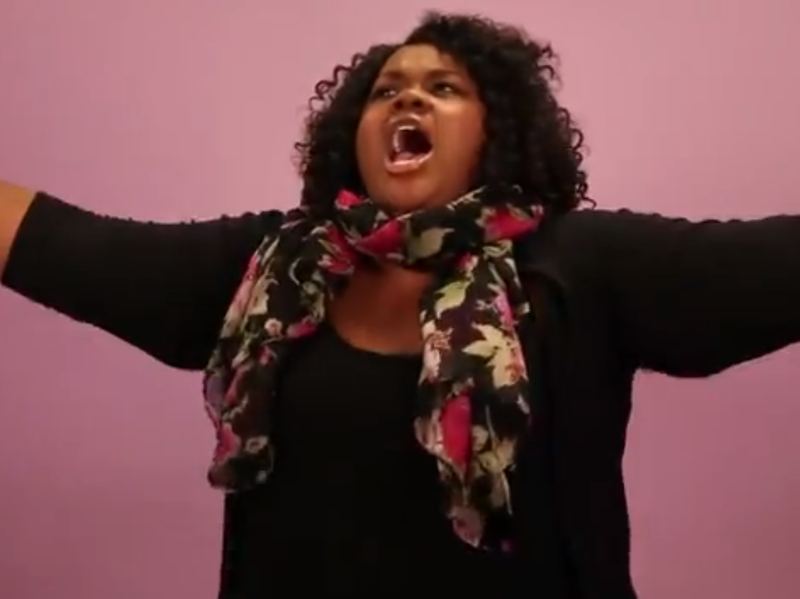 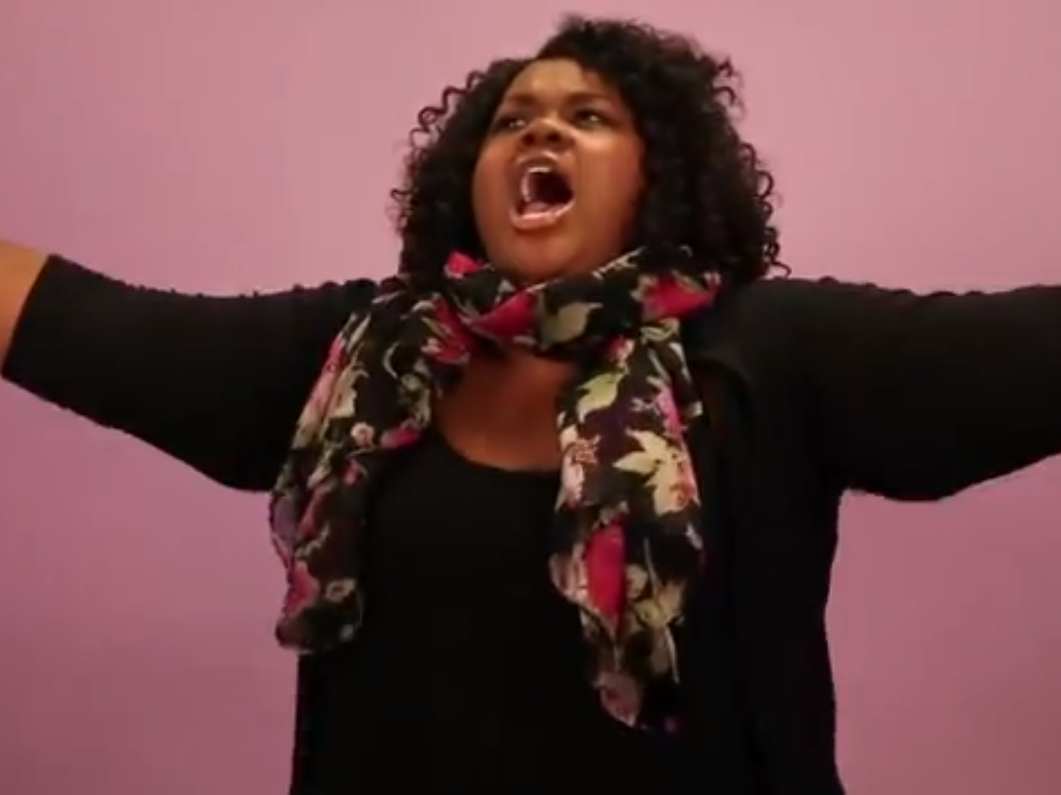 Clams are her favorite thiiiiiiiiiing!

It's an old, hardy comedy trope: A black person has to turn up the volume on some stereotypical behavior in order to navigate some social situation. The sketch is a self-aware take on a modern reality. Even after the era of minstrel shows ended and black actors stopped living out egregious stereotypes for white audiences, white folks still ran mainstream showbiz. If you were going to be black onstage or on camera, your image was still controlled by a largely white industry.

That's still the case, and there's a whole thread of comedy that goes to that well, poking fun at black actors being instructed "to act blacker" (whatever the hell that even means). Let's call them "Black It Up" routines. The most famous one is probably Robert Townsend's bit from Hollywood Shuffle, in which he imagines an acting school designed to prep aspiring black actors on how to land the roles most available to them. Here it is, if you haven't seen it (heads-up: salty language):

What makes this routine so biting is the acknowledgment that the economic calculus dictates that this must be so. Yes, this role is demeaning and the insult is exacerbated by white folks telling me I'm not doing it right — but I also gotta eat.

Townsend's entire movie is about the indignities visited upon black actors trying to earn a living. It may seem a little too on the nose today — the number for the black acting school is "1-800-555-COON" — but the sketch was influential. And it's still pretty funny. (The tall white guy teaching those dudes how to walk at 4:21 is gold. Why is he doing that thing with his neck? Why are his arms swinging so much?)

This Shuffle bit is the obvious spiritual ancestor to this Sprite commercial that people of my generation will remember in which a bunch of tough-talking street ball players begin speaking in exaggerated British accents as soon as the director yells cut. Don't talk to me like a child! I played Hamlet at Cambridge!

Earlier this year, the Upright Citizens Brigade comedy troupe revisited this same idea, and they cut out a lot of the fat in the process. A quarter-century passed between the Townsend sketch and the UCB sketch, and their approaches say volumes about the way the media landscape has and hasn't changed.

Townsend's acting school is selling the chance to be a pimp or a slave; the condescending casting agent in the later UCB sketch rattles off a bunch of Hollywood household names — Oprah, Tyler Perry, Spike Lee — as touchstones for the kind of blackness she's trying to elicit from the eager actress. Progress! One of the good jokes in the bit is that Oprah, Perry and Lee don't all share a sensibility, but the casting director collapses them all into one idea: They're all black people, and so thus interchangeable!

It's not hard to imagine a version of this skit in which the actress, played by Nicole Byers, is resistant to the casting agent's directions. ("You want me to what?") But what makes this one so hilarious as that she's buying all the way in. And the more outlandish her performance is, the more ridiculous the directions she's getting seem. By the end, the eager actress is a munificent, bellowing, body-rolling dispenser of clams — who also doesn't even begin to resemble a real person. (What confluence of stuff has led to this moment in which Shawanna has to go fetch this person some clams? I want to see this play/movie! It sounds terrible!)

This skit seemed to resonate for real actors of color, too. "I've def been in this audition," one commenter said. "She is not exaggerating what it's like going to casting calls as a Black, Hispanic or Asian actor!" said another.

It's hard to knock the hustle, though; folks gotta eat.

Last year, the great Yvette Nicole Brown of NBC's cult favorite Community, talked about this nudging from directors, who try to get euphemistic with it in real life — could you be more sassy?

Female friends that are in my tribe, black girls, we all have stories about that. We find interesting ways to make [directors] tell us to be sassy because they know that it's racist. I say, "Can you show me how to do that?" They don't want to do a black version of sassy, so then they move on.

Community went to this well, too, by having Dean Pelton (played by Jim Rash) try to get Shirley (Brown's character) to be more sassy for a commercial. But Pelton can't bring himself to say the s-word. ("What's another word for 'happy-threatening'?" he asks his assistant, Annie.)

Now look at this Key & Peele sketch, also from this year, which takes this same idea about racial performance and flips it yet again.

The awkwardness of wearing different public faces is a central part of Key & Peele's comedy — see the duo's famous "Phone Call" sketch or their hilarious "I Said Bitch" sketch. (I'm also required by law to make the obvious reading in which Key & Peele's biracial-ness probably informs their obsession with the Janus-like.)

In "Black Jeff / White Jeff," Key's lady friend wonders why he doesn't push back harder at the waitstaff at the restaurant where they're having dinner. He tries to switch it up, but doesn't know how to modulate — code-switching gone horribly awry! — and ends up directing his opprobrium and his flattery at the wrong folks. Keegan Michael Key's gift for physical comedy gives the sketch its energy; he flips between stereotypes of blackness, whiteness and even Latino-ness at one point, ultimately all for naught. But he's not playing an actor here, he's just a regular guy who is literally just trying to eat. (I'm going to call shenanigans on this: His girlfriend seriously thought "blacking it up" was going to get them better service? Ma'am.)

It's worth noting that this "be more [euphemism for your race]" isn't limited to Blacking It Up, specifically; Latina actresses are almost certainly told to "be more spicy."

The natural next step in the evolution of this idea, of course, is the "Be Whiter" sketch. Maybe some super-down white college kid who grew up with black folks and runs her campus chapter of the NAACP has to learn to reverse-code switch or something. (Could we try this, but maybe a little more "mainstream"? A little less FUBU* and a little more J. Crew?)

So Code Switch readers: What's your favorite sketch with this idea and why? What versions would you most like to see? (If you refer to a video, try to share a link in the comments.)

* Don't nobody wear FUBU anymore. If you know otherwise, pics or it didn't happen.