Accessibility links
The History Of How A Shogun's Boast Made Lincoln A 'Tycoon' : Code Switch What do Commodore Matthew Perry, President Abraham Lincoln and writer F. Scott Fitzgerald have in common? Go ahead and guess. The answer involves an inferiority complex, a nickname and a novel cut short by the author's untimely death. 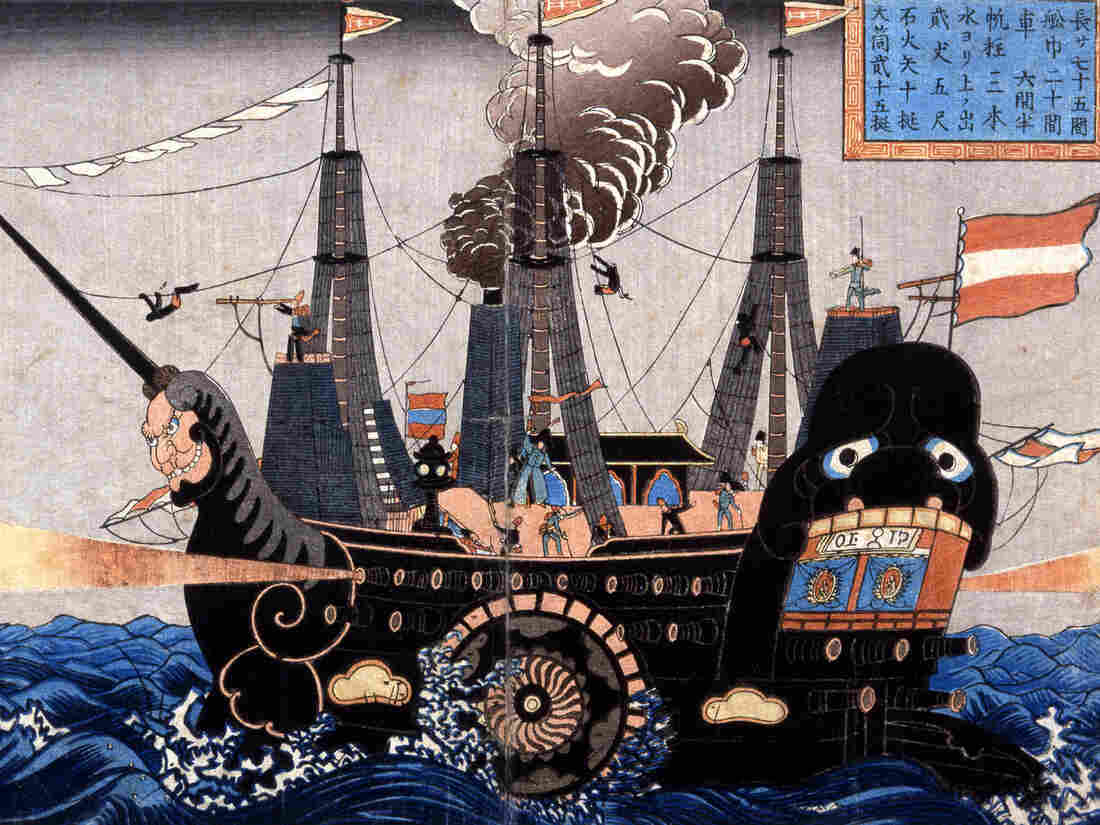 The arrival of Commodore Matthew C. Perry's "black ships" in Tokyo Bay in 1853 helped persuade the Japanese to negotiate a treaty. Perry had more firepower than all the coastal artillery defending Tokyo Bay. AP hide caption 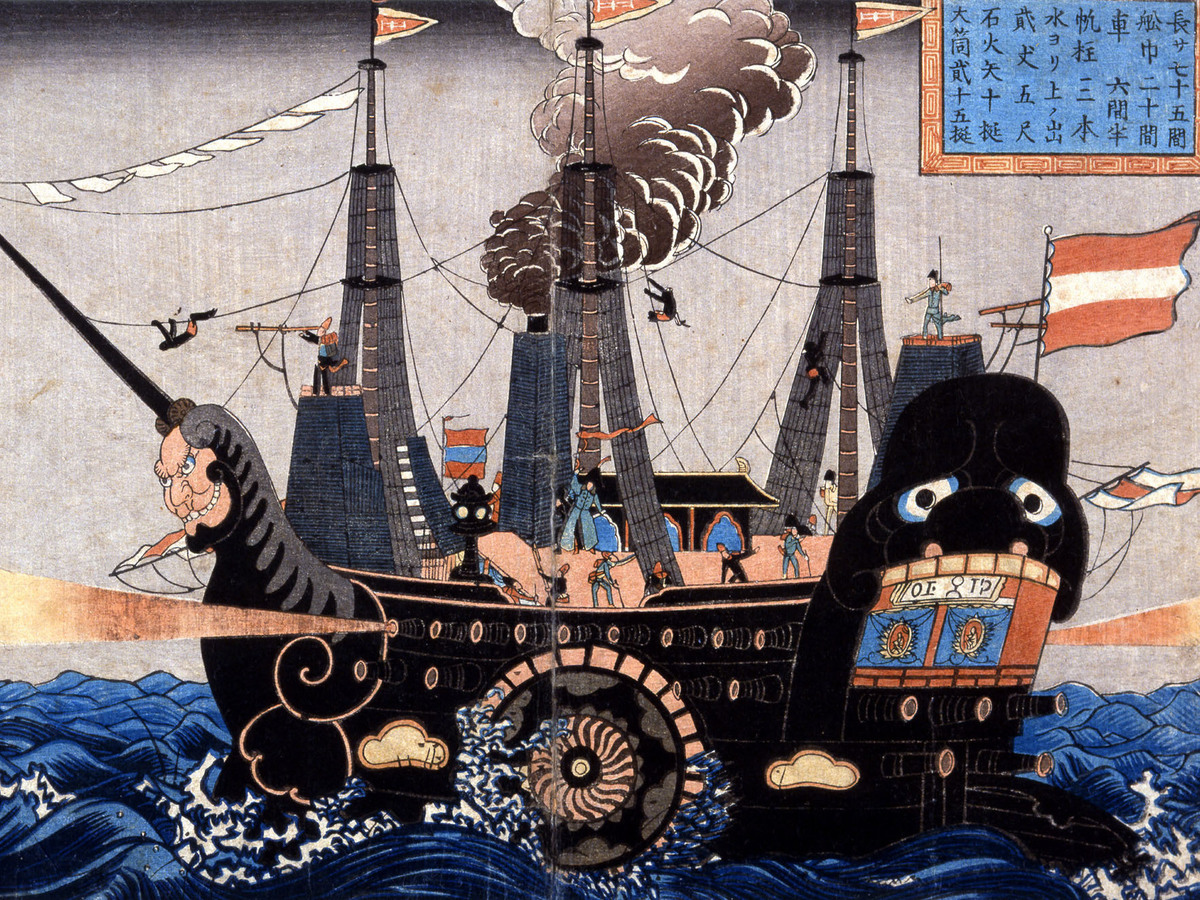 The arrival of Commodore Matthew C. Perry's "black ships" in Tokyo Bay in 1853 helped persuade the Japanese to negotiate a treaty. Perry had more firepower than all the coastal artillery defending Tokyo Bay.

When the Canadian billionaire and businessman Paul Desmarais died last week at the age of 86, nearly every one of his obituaries described him as a "tycoon" when discussing his career.

Tycoon. It's a word that's been used for over 150 years to denote extreme wealth, power and success. Enter the phrase "Wall Street tycoon" into Google and you'll get over 3 million hits linking to news and articles chronicling financial business moguls. The Merriam-Webster dictionary defines a tycoon as "a very wealthy and powerful business person." Ask people to name who embodies the word "tycoon" today and they'd probably describe someone like Berkshire Hathaway's Warren Buffet or Microsoft's Bill Gates.

But how and where did the word originate? Few people know the word traces its origins to when United States naval officer Commodore Matthew Perry worked to open trade relations with Japan in the 1850s.

Before Perry, a distinguished naval officer, arrived in the Japanese port of Edo in July of 1853, Japan had been almost completely closed to outside trade for 200 years. Aside from extremely limited commercial relations with the Dutch (who were only permitted on one small island) and the Chinese, trade had been closed for two centuries. Perry carried a letter from President Millard Filmore addressed to the Emperor of Japan. He hoped that Japan would finally open itself to the rest of the world (Perry's four steamships led by the USS Powhatan, were heavily armed in case the letter did not work).

Upon arrival, Perry refused to meet with any of the lesser Japanese officials sent to negotiate with him, instead insisting on meeting with no one other than "a dignitary of the highest rank in the empire." This insistence was essential to the creation of the word.

What Perry perhaps did not understand was that the Japanese Emperor had largely been reduced to a ceremonial figurehead and that Japan was effectively being run by the Tokugawa family, who held the shogunate at the time. So while Perry believed he was negotiating with representatives of the Emperor, he was really talking with the shogun.

There was only one problem, at least from the shogun's perspective. Japanese officials believed the title did not sound sufficiently impressive, as shogun merely translates to "general of the army" in English. In an effort to create a title that reflected the power and grandeur the country was trying to project when dealing with foreigners, the shogun instead began using the word taikun with foreigners. (Interestingly, taikun is itself an adaptation of the Chinese word takiun, which means "great prince.")

Perry's negotiations were eventually successful. He and the Japanese would sign the Treaty of Kanagawa in 1854. The treaty ended Japanese isolation and guaranteed a "permanent friendship" between the two nations. Perry would return to the United States in 1855. Upon his return, Congress voted to grant Perry a $20,000 reward for his successful work in Japan. Perry went on to publish an account of the expedition titled Narrative of the Expedition of an American Squadron the China Seas and Japan.

As for the word "taikun": It quickly became "tycoon" in English when Perry brought the word back with him to the United States, first appearing in print in 1857. Among the fans of the word were two of President Abraham Lincoln's most trusted aides — John Hay and John Nicolay. The pair often referred to Lincoln as "the Tycoon" and references to "the Tycoon" appear frequently in Hay's diaries.

"The Tycoon is in fine whack," Hay wrote in a letter in 1863. "I have rarely seen him more serene & busy. He is managing this war, the draft, foreign relations, and planning a reconstruction..."

"The Tycoon is in fine whack," Hay wrote in a letter in 1863. "I have rarely seen him more serene & busy. He is managing this war, the draft, foreign relations, and planning a reconstruction..."

After World War I, the word's definition would shift from from the stately, government-oriented definition to a description of business magnates and wealth. By the 1940s, "tycoon" was almost exclusively used by journalists to refer to the extremely wealthy (and by extension, the extremely powerful.)

F. Scott Fitzgerald attempted to bring the popular image of a business tycoon to life in his last novel, The Love of The Last Tycoon, which was unfinished at the time of his death in 1944. In it, the high-powered Hollywood executive at the center of the story describes his power and his role in the world:

"These lights, this brightness, these clusters of human hope, of wild desire—I shall take these lights in my fingers. I shall make them bright, and whether they shine or not, it is in these fingers that they shall succeed or fail."