Accessibility links
Remembering The Woman Who Gave Motown Its Charm : Code Switch Maxine Powell, who ran a finishing school for Motown's musicians, died this weekend at the age of 98. Her work polishing young artists for mainstream exposure was a big reason the legendary record label was able to integrate the airwaves. 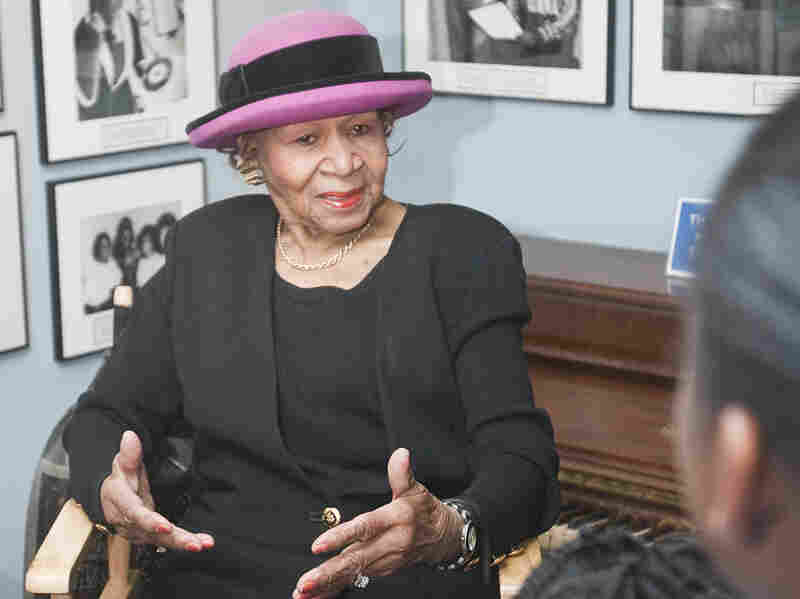 In 2007, decades after Maxine Powell had retired from training a generation of black artists at Motown, a reporter from a Cleveland television station asked her whether anyone had been particularly difficult to work with.

Powell cut her off before she finished. "I don't have that," she said. "No one is difficult. Each person is a beautiful, unique human being. So if you have a problem and you're acting negative, you have been conditioned."

She went on. "So I said to my students, 'Allow me to help you unlearn that and realize and discover what a beautiful flower you are.' "

Powell, who died this weekend at the age of 98, was Motown's director of artist development during its heyday, and her job was to teach the label's young musicians how to present themselves in public. "They did come from humble beginnings," she told the Cleveland reporter, "some of them from the projects, some of them were using street language, some were rude and crude."

But to audiences at the time, those beginnings would have been invisible. For a long stretch in the 1960s, Motown's clean, factory-precise sound dominated popular music. The label's roster — the Temptations, the Supremes, The Jackson 5 — helped desegregate the radio waves. Motown was a kind of machine: Songs were written by committee, and artists had their images meticulously managed and cultivated. This meant that Motown's artists made incursions into places that black artists were not often seen; according to a Contemporary Black Biography interview, Powell told artists she was preparing them for "the White House and Buckingham Palace."

She was known to her charges as a straight-talking taskmaster. In 2009, All Things Considered host Rebecca Roberts asked her what kind of tips she gave artists:

"Body language. Everybody walks, but I teach how to glide. I teach how if you drop something, how to pick it up. If your slip comes down around your feet, how to stand in the basic standing position and step out of it smiling, with your hip bones pushed forward and the buttocks pushed under. You never, never protrude the buttocks because it means an ugly gesture, you see? They learned all of those things. I was turned loose to do whatever was necessary to make the artist look first-class."

But some artists were initially resistant to her instruction. She told the Detroit News that Marvin Gaye felt that he didn't "need 'charm school.' "

She corrected him: "It's a finishing school."

"Well, I don't need finishing," he told her.

" 'You don't need as much as some, but you close your eyes when you're singing, and people think you're asleep,' I told him," Powell recalled. " 'And you slouch. So we'll work on those two things.' "

She also worked with the Temptations, Tammi Terrell, Smokey Robinson and Stevie Wonder. ("But I didn't do anything for Stevie," she told Roberts. "Stevie was always beautiful.")

"Two days a week when you were back in Detroit you had to go to artists' development," Robinson said. "It was mandatory. You went there and learned so many things about being in show business."

But Powell said that her work wasn't simply about prettifying pop stars — she saw it as part of the larger fight for black progress. "All my life I was thinking of things that would help my race become outstanding and I thought of class and style ... two things that would be accepted around the world," she told the Victoria and Albert Museum.

Just this summer, Powell told people gathered at an event in her honor that she would "teach until there's no breath left in my body." And indeed, Martha Reeves, the lead singer of the Vandellas and later a member of Detroit's City Council, said she dispatched Powell to schools and retirement homes to teach children and the elderly about "poise and pride."

Today, black artists don't have trouble making it to the White House. Beyonce was the toast of the inaugural ball in 2008, and Jay Z, her husband, was on the dais during President Obama's second inauguration this year. Black artists no longer need charm school to burnish their palatability with white audiences; today, authenticity has as much cachet as respectability, if not more. Motown desegregated the airwaves, normalizing black celebrity enough that black people would eventually not always have to be perfect in public spaces. (Indeed, many of the artists that Powell tutored — Gaye and Terrell, in particular — later dealt with their demons in the limelight.) That's a reality that Maxine Powell and Motown helped to bring about, even if that may not have been their intent.

To the last, Powell was a picture of grace.

"Thank you so much for being here," Roberts said to her on All Things Considered.

You can listen to Karen Grigsby Bates's obituary for Maxine Powell on NPR's All Things Considered, which is embedded at the top of this article.