Accessibility links
The Racial History Of The 'Grandfather Clause' : Code Switch Companies and individuals are considered grandfathered and exempt from new sets of regulations all the time. But the term and the concept date from the era of segregation that followed the Civil War. 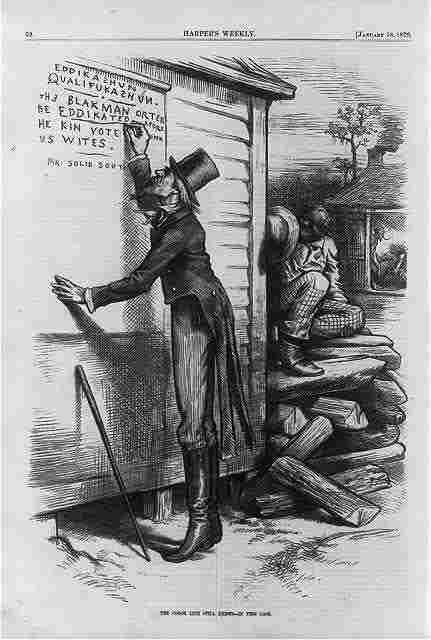 This editorial cartoon from a January 1879 edition of Harper's Weekly pokes fun at the use of literacy tests for blacks as voting qualifications. Wikimedia Commons hide caption

People aren't exempted from new regulations because they're old and crotchety, even if that's what it sounds like when we say they're "grandfathered in."

The term "grandfathered" has become part of the language. It's an easy way to describe individuals or companies who get to keep operating under an existing set of expectations when new rules are put in place.

The troubled HealthCare.gov website reassures consumers that they can stay enrolled in grandfathered insurance plans that existed before the Affordable Care Act was enacted in 2010. Old power plants are sometimes grandfathered from having to meet new clean air requirements.

But like so many things, the term "grandfather," used in this way, has its roots in America's racial history. It entered the lexicon not just because it suggests something old, but because of a specific set of 19th century laws regulating voting.

The 15th Amendment, which prohibited racial discrimination in voting, was ratified by the states in 1870. If you know your history, you'll realize that African-Americans were nevertheless kept from voting in large numbers in Southern states for nearly a century more.

Various states created requirements — literacy tests and poll taxes and constitutional quizzes — that were designed to keep blacks from registering to vote. But many poor Southern whites were at risk of also losing their rights because they could not have met such expectations.

"If all these white people are going to be noncitizens along with blacks, the idea is going to lose a lot of support," says James Smethurst, who teaches African-American studies at the University of Massachusetts.

The solution? A half-dozen states passed laws that made men eligible to vote if they had been able to vote before African-Americans were given the franchise (generally, 1867), or if they were the lineal descendants of voters back then.

This was called the grandfather clause. Most such laws were enacted in the early 1890s.

"The grandfather clause is actually not a means of disenfranchising anybody," says Michael Klarman, a Harvard law professor. "It was a means of enfranchising whites who might have been excluded by things like literacy clauses. It was politically necessary, because otherwise you'd have too much opposition from poor whites who would have been disenfranchised."

But protecting whites from restrictions meant to apply to African-Americans was obviously another form of discrimination itself.

"Because of the 15th Amendment, you can't pass laws saying blacks can't vote, which is what they wanted to do," says Eric Foner, a Columbia University historian. "But the 15th Amendment allowed restrictions that were nonracial. This was pretty prima facie a way to allow whites to vote, and not blacks."

For that reason, nearly every state put a time limit on their grandfather clauses. They hoped to get whites registered before these laws could be challenged in court.

"Once you've got people removed from the rolls, it becomes less necessary," Smethurst says. "The white people are on the rolls, and the black people are not."

Tracing The Story Of 'Lynch Mob'

African-Americans typically lacked the financial resources to file suit. The NAACP, founded in 1909, persuaded a U.S. attorney to challenge Oklahoma's grandfather clause, which had been enacted in 1910.

Of the more than 55,000 blacks who were in Oklahoma in 1900, only 57 came from states that had permitted African-Americans to vote in 1867, according to Klarman's book From Jim Crow to Civil Rights: The Supreme Court and the Struggle for Racial Equality.

The justices were concerned that the grandfather clause was not only discriminatory but a clear attempt by a state to nullify the federal Constitution. It "was so obvious an evasion that the Supreme Court could not have failed to declare it unconstitutional," The Washington Post wrote at the time.

The decision had almost no effect, however. The Oklahoma Legislature met in special session to grandfather in the grandfather clause. The new law said those who had been registered in 1914 — whites under the old system — were automatically registered to vote, while African-Americans could only register between April 30 and May 11, 1916, or forever be disenfranchised.

That law stayed on the books until a Supreme Court ruling in 1939.

The intent of the grandfather clause, however, was not strictly to placate some whites while discriminating against blacks, says Spencer Overton, author of Stealing Democracy: The New Politics of Voter Suppression. It was also about power.

In that era, most African-Americans voted Republican, the party of Abraham Lincoln.

"The whole objective of excluding African-Americans was not just white supremacy," Overton says. "It was, 'We're Democrats; they're Republicans; and we're going to exclude them.' I'm not saying there weren't racial overtones, but there were significant partisan overtones as well."

The same trick had been used against white immigrants in the Northeast. It's worth remembering that Massachusetts and Connecticut were the first states to impose literacy tests, in hopes of keeping immigrants — who often supported Democrats in a largely Republican region — from voting.

At least one grandfather clause in the South was based on a Massachusetts statute from 1857, says Overton, who teaches law at George Washington University.

Perhaps it's because the grandfather clause was not solely about race — and because it was banned a century ago — most people use the term "grandfathered in" and never realize it once had racial connotations.

"This term 'grandfather' has been kind of deracialized," Overton says. "It's really a very convenient, shorthand term. We probably would not be as comfortable with using it if we associated it with grandfather clauses in the past and poll taxes and things like that."