Accessibility links
It Takes A Classroom To Learn The Family Language : Code Switch Feeling a disconnect with their culture and ethnicity, many young Americans are going back to their heritage languages to bridge the gap. But identity isn't as simple as what language we speak.

It Takes A Classroom To Learn The Family Language

It Takes A Classroom To Learn The Family Language 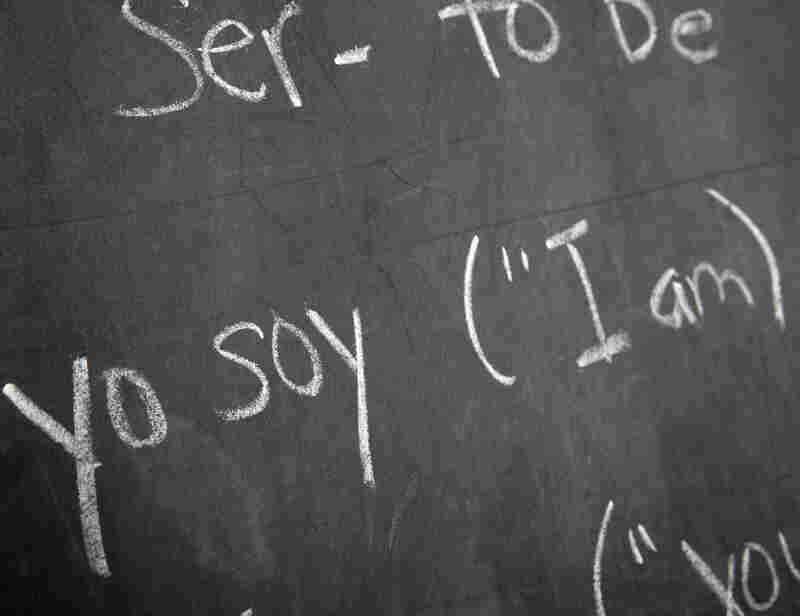 Many first- and second-generation Americans are turning to classrooms to relearn their heritage languages. Corbis hide caption 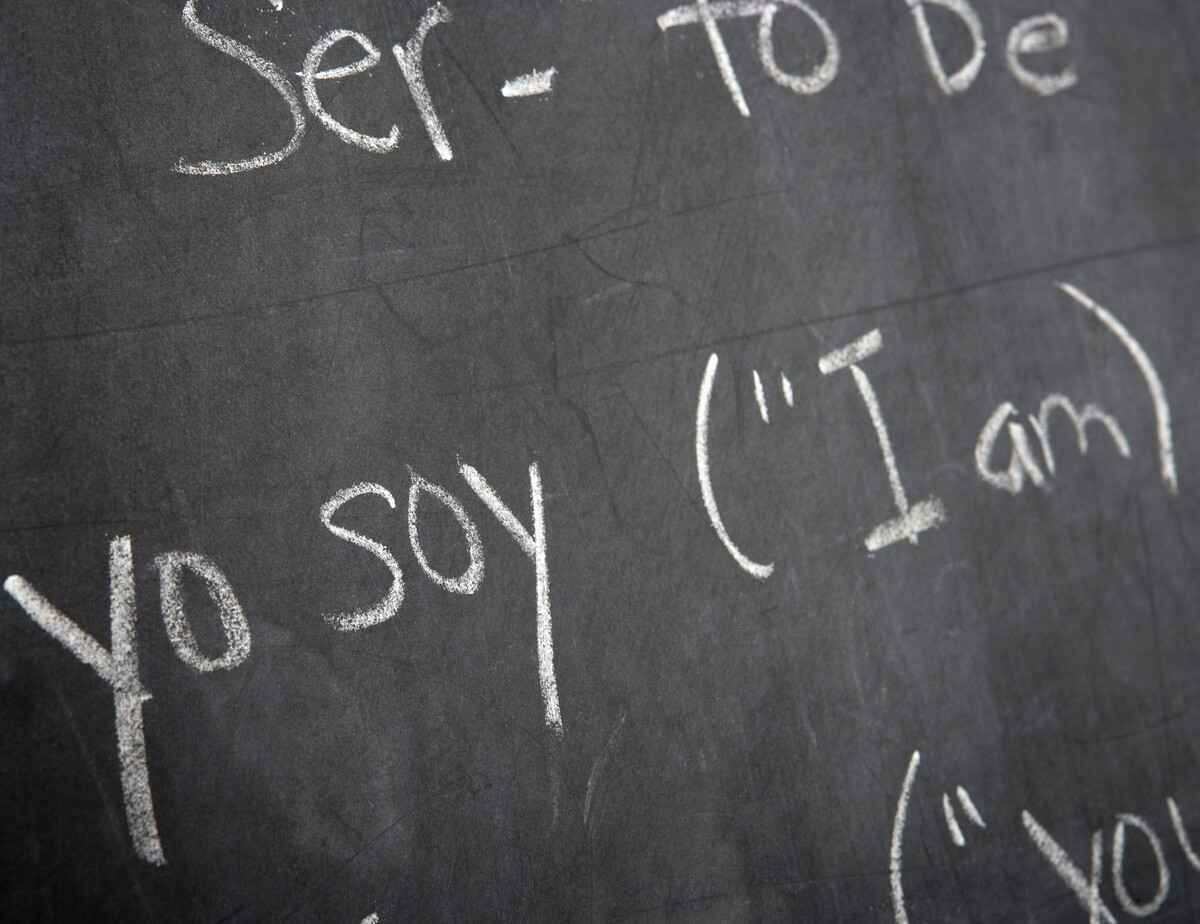 Many first- and second-generation Americans are turning to classrooms to relearn their heritage languages.

Call it a linguistic identity crisis.

Growing up in Westchester, N.Y., 25-year-old Danielle Alvarez says, she and her two siblings didn't have much need for Spanish. With few other Hispanic families around, she got by with the few phrases she had picked up from her Mexican-born father: good night, put a coat on, be careful.

Her half-Colombian mother didn't speak Spanish either; it wasn't a big priority. Alvarez says she felt inadequate, though, when she was around her cousins — all of whom did speak Spanish. "I didn't feel quite as Mexican or Colombian compared to my cousins," she says. "I didn't quite know where to place myself."

The linguistic shortcoming weighed on Alvarez. People would hear her Spanish surname and assume she could speak the language; she felt bad that she didn't. When it came time in high school to choose to study either Italian or Spanish, there was no question which she wanted to learn. "I felt, like, a quiet motivation" in her Spanish class, she says. "I tried my best like in any other classes, but to me it meant a little bit more."

Alvarez went on to minor in Spanish, as well as French, at Syracuse University, and is now studying global communications at the American University of Paris. She's kept up her Spanish, even studied abroad in Chile, and has a new appreciation for her Hispanic heritage. "[Studying Spanish] illuminated parts of the culture," Alvarez says. "If nothing else, I was able to communicate with my dad's parents a little more, which was nice."

The desire to reinforce ethnic identity through language is a feeling that I and many other first-, second- and third-generation Americans understand well. My half-Palestinian mother grew up in Lebanon and speaks Arabic; for various reasons, I don't. She says teaching me and my sister against constant interruptions of "What did you say?" from our English-only-speaking father became too stressful. As proud as I am of my Arab heritage, without a linguistic marker to link me to the community, I've never felt entirely comfortable identifying as an Arab, at least not compared to my cousins who grew up in the Middle East.

Without Arabic, little else about me is Arab. I don't dress or look like an Arab (feel free to rely on stereotypes for this one — trust me, I don't fit them). I can't dance the dabke. I eat hummus and have a scarab (a small turquoise beetle amulet thought to bring good luck) in my purse, sure, but without Arabic, can I even call myself an Arab?

As proud as I am of my Arab heritage, without a linguistic marker to link me to the community, I've never felt entirely comfortable identifying as an Arab, at least not compared to my cousins who grew up in the Middle East.

Like Alvarez, I responded to the feelings of ethnic inadequacy by choosing to buckle down and finally learn the language I felt I was lacking. I decided last month to enroll in an Arabic course at a local school — not just to be able to better communicate with my family, but to somehow legitimize my Arab-ness. She and I are what linguists call heritage language learners, and we're just two of the many young adults turning to language as a better way to understand our identities.

A heritage language learner, according to the Center for Applied Linguistics, is any person "studying a language who has proficiency in or a cultural connection to that language." (Some of us have more cultural connection than proficiency.) Unlike students who start a foreign language from scratch, most heritage learners come equipped with some degree of fluency, if not literacy, in a language, and an understanding of the community that uses the language.

Most heritage speakers "go through phases," says Maria Carreira, a professor of Spanish at California State University, Long Beach. As children, she says, they find using a language other than English at home and with relatives to be natural. By the awkward middle-school years, many reject their heritage language, despite their parents' best efforts to enforce a no-English policy at home. "They don't want to be different," Carreira says. "There's a rejection, a turning toward English. They want to blend in."

But "once that period has passed," she says, "they say, 'Oh my gosh, I wish I had kept up my language.'" By the formative late-high-school, early-college years, "young people yearn to connect with their roots to understand themselves."

Professor Linda Godson, coordinator of Portland State University's Heritage Language Initiative, says her school's program came about nine years ago when a group of Vietnamese students, frustrated by a lack of more advanced Vietnamese classes, started holding their own class every Saturday.

"So, we decided to offer a heritage Vietnamese course," Godson says. "And then several other people came forward and said, 'What about us?' " Over the next two years, her department developed five different heritage language courses. Resources have ebbed and flowed, but demand has only grown, she says; this year the university is offering heritage Vietnamese and Spanish, and is raising money for a heritage Hindi course.

Heritage learners share many of the same motivations for studying a language with other foreign-language learners: academic requirements, job opportunities. But more than that, they're looking for a connection to the wider culture they can't get in typical classes that focus more on basic grammar and vocabulary. Heritage-only classes allow students to explore their language and culture with others who share the same experience of being a heritage learner.

Professor Taoufik Ben Amor, coordinator of the Arabic program at Columbia University, says the popularity of the school's Arabic for heritage speakers courses has been driven by first- and second-generation Americans looking to reclaim or maintain a link to their family's homeland, a phenomenon that is in itself a dramatic shift from previous generations. He says the latest wave of Arab immigrants, including many of his students, "came at a time when the idea of the melting pot has disappeared a little bit."

Immigrants of the 19th and much of the 20th centuries strove and were expected to adopt English, often at the expense of their native languages, on their way to becoming true Americans. More recent arrivals are coming at a time when it is acceptable and even encouraged to embrace their native languages and cultures. "The diversity, the different languages are very important to many of the immigrants who come," Ben Amor says. "In a sense, there's sort of a pride in their diversity and their heritage."

Alvarez says that before she learned Spanish, she couldn't relate to the Latino/Latina pride she saw in others. Today, even though she is nearly fluent in Spanish, Alvarez says her Hispanic roots aren't the most important aspect of her identity. "I try to think of myself as someone with an international heritage," she says. "Yes, I do have Hispanic heritage, but it's not more to the forefront."

It's a far cry from the days when Alvarez used to feel guilty about not knowing Spanish, but her preference to identify as "international" rather than "Hispanic" underlies the complexity of ethnic identities among heritage learners. Whether or not someone knows their heritage language "doesn't affect their ethnicity," says Carmen Fought, linguistics professor at Pitzer College in Claremont, Calif.

"You find different ways to express your identity," Fought says. "Music, food, dress, going to festivals. Language is just a piece of the puzzle."

But for me, at least, it's an important piece of the puzzle. Because even if I misplace that scarab in my purse or lose my taste for hummus, I want something to remain that will keep me connected to my family, and to our Arab culture. For now, being Arab is a part of my identity. And I'd, at least, like to sound the part.