Accessibility links
Photographing Puerto Rican New York, With A 'Sympathetic Eye' : Code Switch The 1970s were a tumultuous time in the city's history, but it was also a time of great change for the Latino community, then mostly Puerto Rican. Photojournalist-activist Bolivar Arellano made a point of documenting the "good." Those who have studied his work say he captured the nuance that outsiders often missed.

In the raging 1970s, New York City was dangerous, broke and at times on fire.

Latinos in the city were taking to the streets, running for office and carving out artistic spaces. "Latino" at the time in New York meant "Puerto Rican."

Photojournalist Bolivar Arellano immigrated to the city in '71, and remembers a vivid introduction to the Young Lords, a militant organization that advocated for Puerto Rican independence. 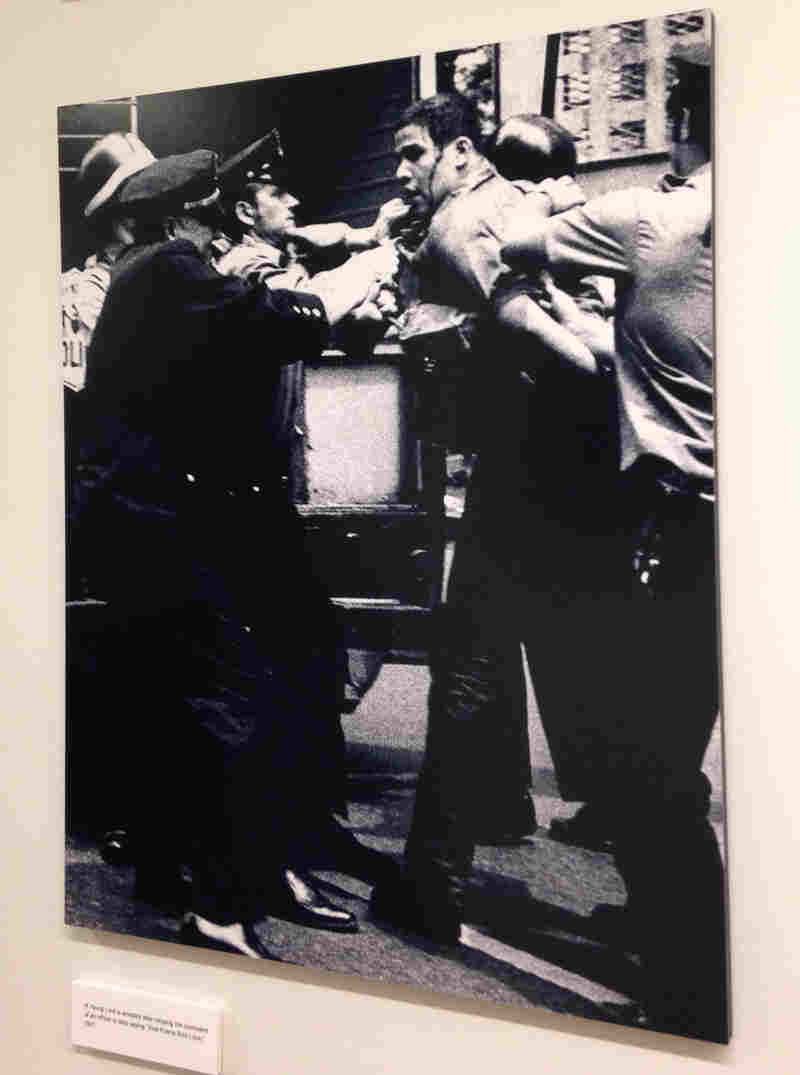 A member of the Young Lords with blood on his face is arrested by police. Bolivar Arellano took this photo, now on display at Columbia University, in 1971. Dana Farrington/NPR hide caption 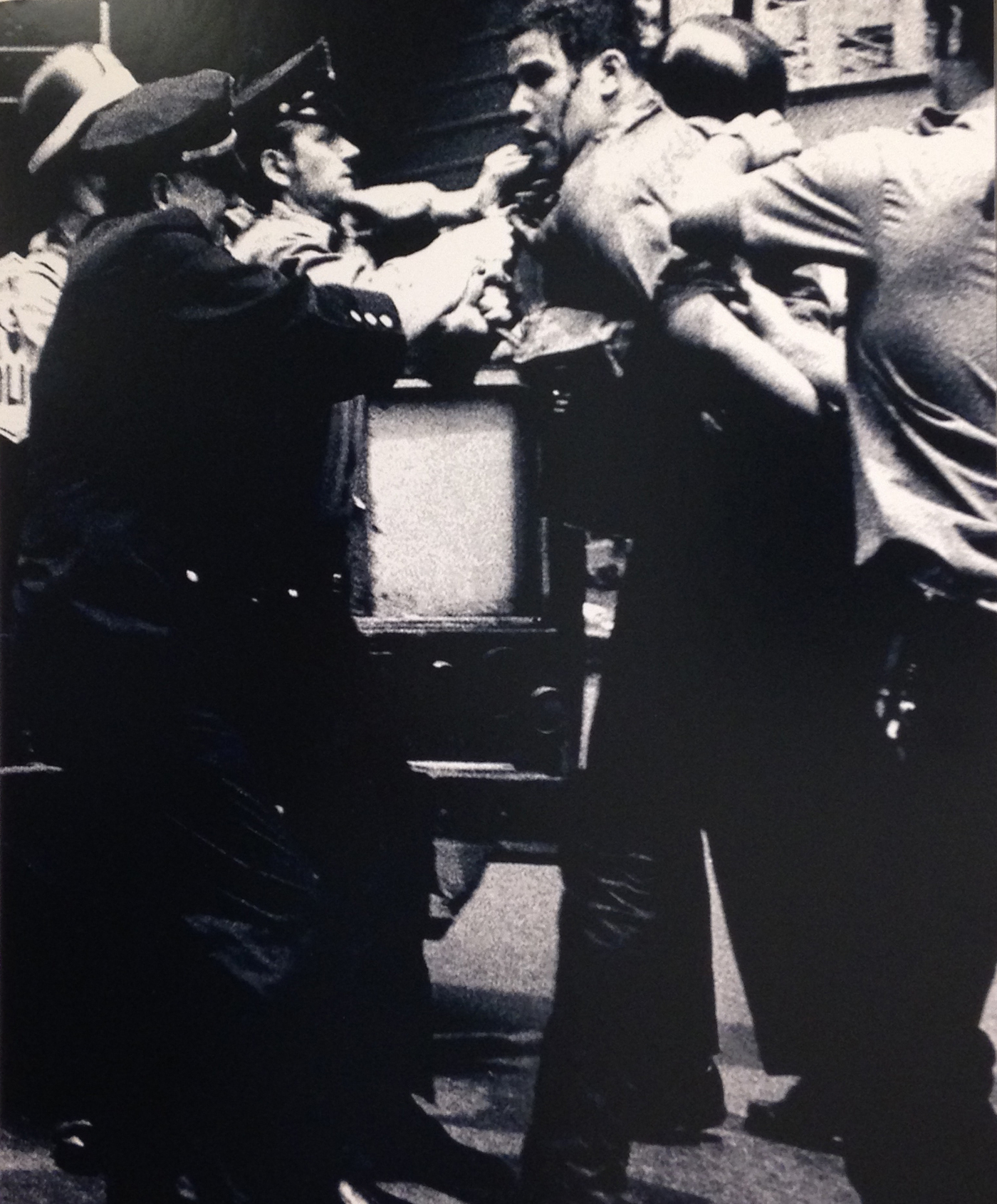 A member of the Young Lords with blood on his face is arrested by police. Bolivar Arellano took this photo, now on display at Columbia University, in 1971.

"Viva Puerto Rico libre!" Arellano heard a man shout next to a police officer. "Long live free Puerto Rico," was not a sentiment the officer shared. The man was hit with a baton after each declaration — six times, Arellano says.

"Blood was coming to his face, and that's when I said, Puerto Rico has to be beautiful for this guy to resist that beating," Arellano says. "So that was my encounter with the Puerto Rican community. Since then, I'm still with them."

This self-described activist-photojournalist chronicled the Latino community for El Diario-La Prensa, which also aimed to tell the stories the English-language press wasn't covering.

The Spanish-language daily is marking its centennial this year and is placing 5,000 archival images in Columbia University's care for preservation. Twenty of Arellano's black-and-white photos from the 1970s are now on display at the university.

"The Raging '70s" exhibit, which opened this month, positions vibrant musicians against militant activists — applause alongside protest chants. Celia Cruz onstage at Madison Square Garden. Alleged robbers in police cars after a blackout. Drug-dealing in public space. A re-creation of daily life on the Lower East Side for a film, a pig roasting in the foreground. 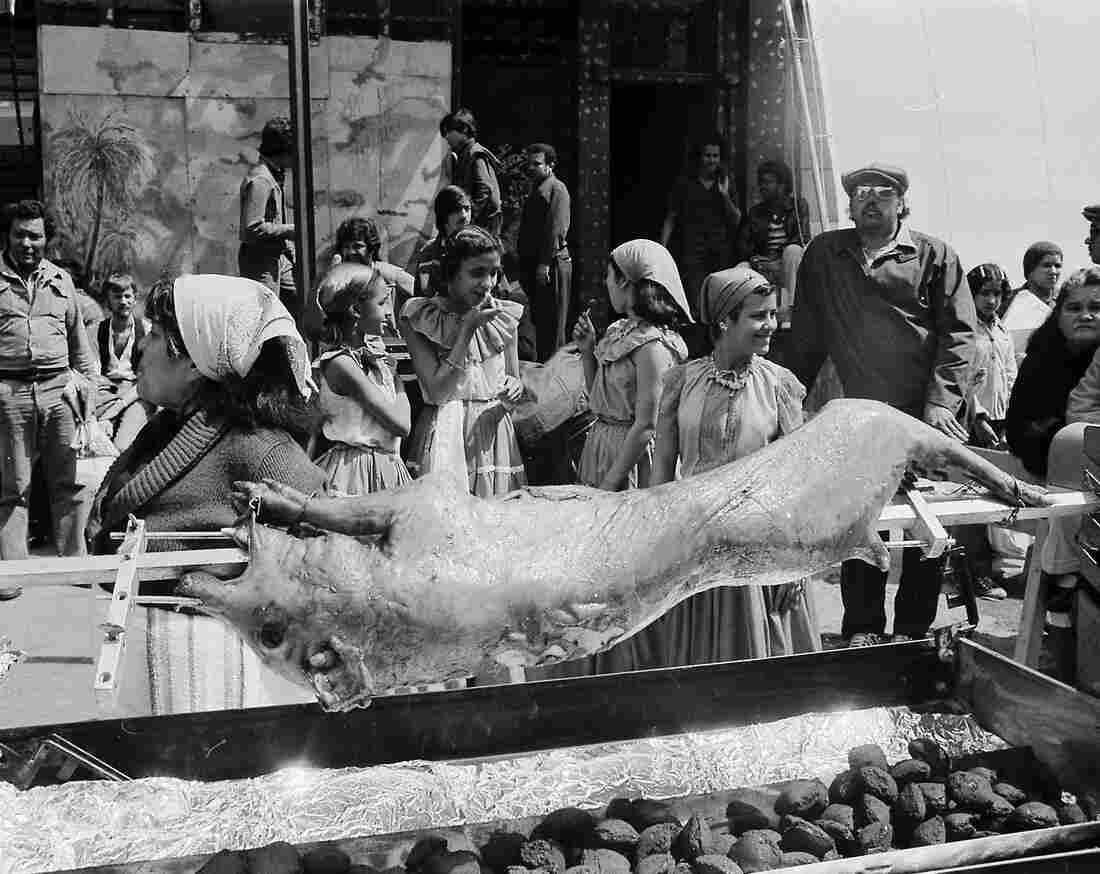 A staged pig roasting in Lower East Side, Manhattan, for the film Oliver's Story in 1978. Bolivar Arellano hide caption

Arellano's work captures these moments in all their complexity, pulling you into specific places and times that are beautiful and at times tragic.

The photos show a history, but they also disrupt a familiar storyline of poverty and hardship. Arellano says he purposefully wanted to capture the joy of the Latino community. 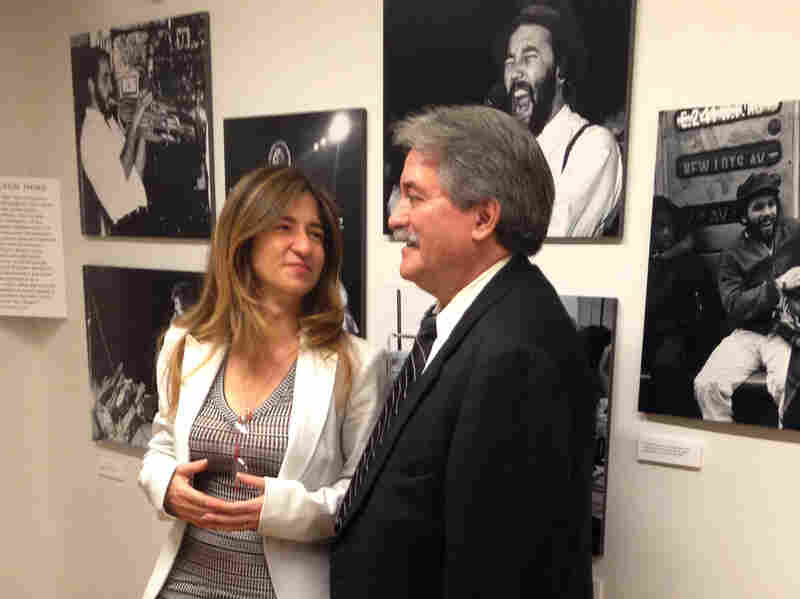 Frances Negrón-Muntaner curated the exhibit of Bolivar Arellano's work, on display at Columbia's Center for the Study of Ethnicity and Race. Dana Farrington/NPR hide caption

The photos in Arellano's exhibit uphold the paper's claim of being "campeón de los hispanos," or champion of Hispanics.

Erica Gonzalez, the executive editor of El Diario-La Prensa, says the paper "has been forced to take up the banner of advocacy" because of the challenges its readership has faced.

Arellano's photographs, along with the rest of El Diario's archival images, will now be housed in the university's Latino Arts and Activism Collection at the Rare Book and Manuscript Library.

For the exhibit, Columbia professor Frances Negrón-Muntaner sifted through dozens upon dozens of Arellano's photos to "map" the 1970s.

The Nuyorican movement of the 1970s was a fusion of Puerto Rican culture and New York identity. Columbia adjunct professor and journalist Ed Morales says it reflected an "absorption of influences," combining English language with cultural aspects of Latin America. 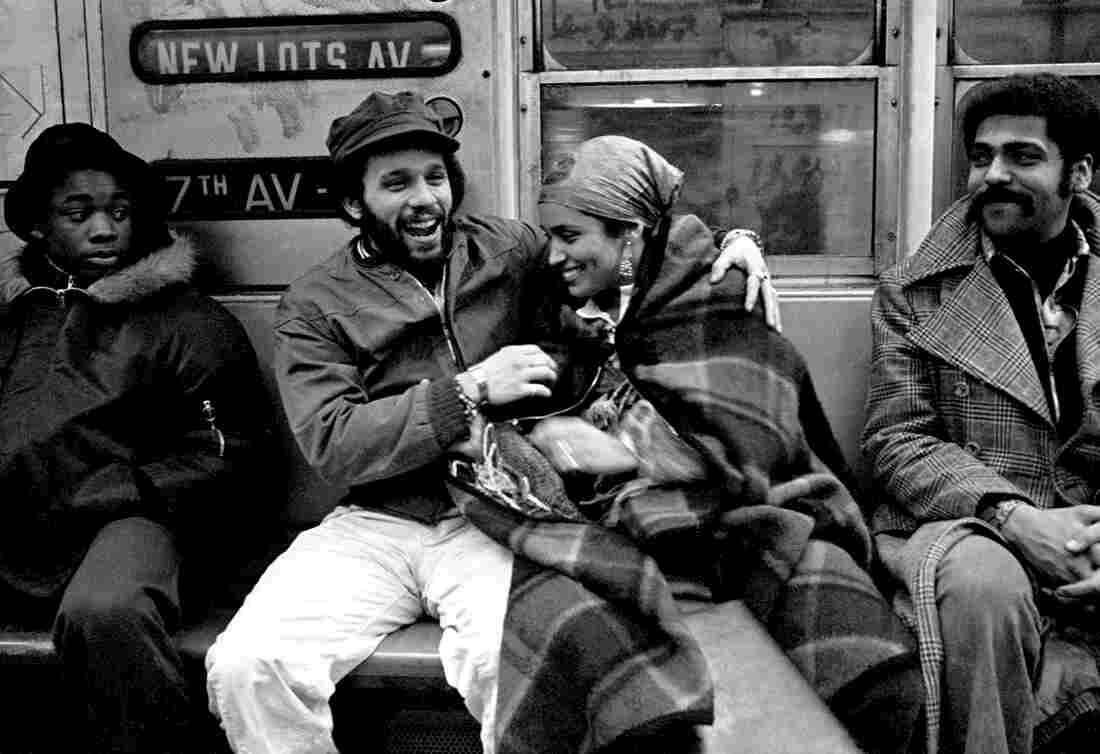 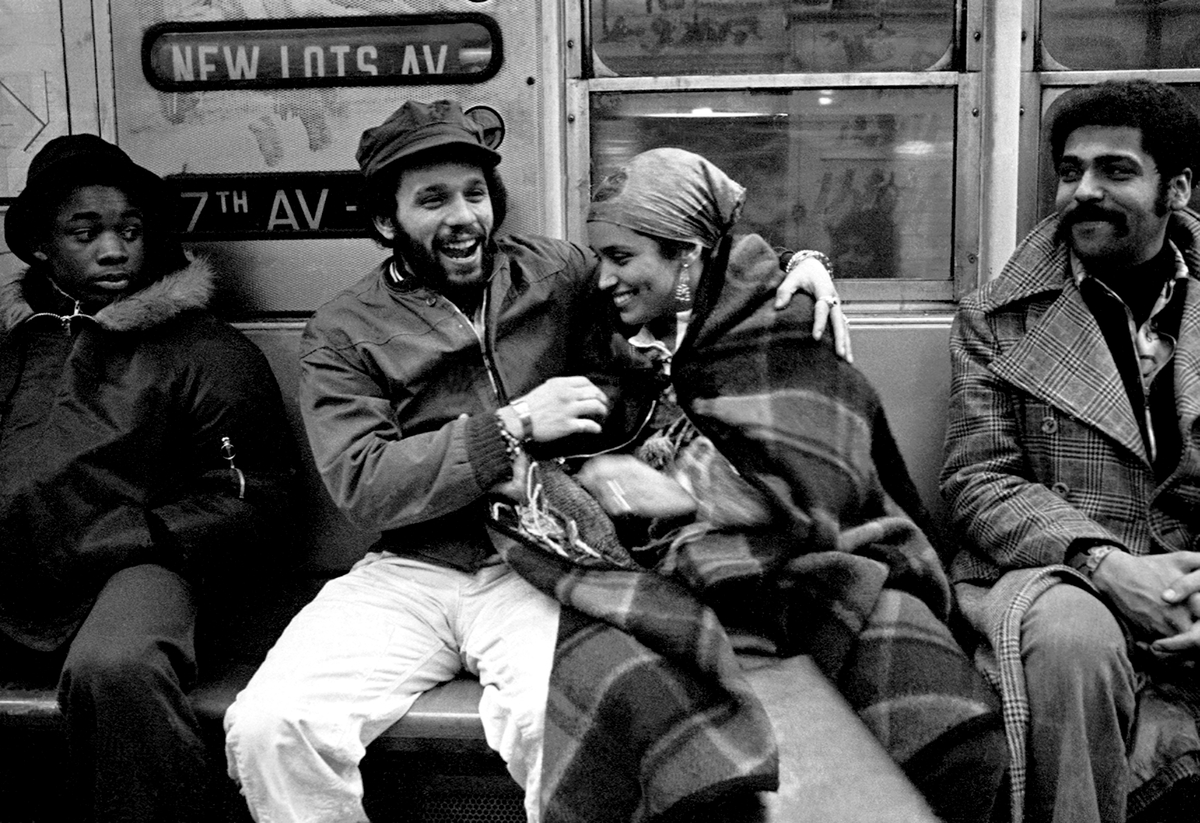 Miguel Piñero of the Nuyorican literary movement and poet Sandra Maria Esteves on the train in New York City in 1977.

A prominent figure in that movement was Miguel Piñero, co-founder of the Nuyorican Poets Café. Arellano captured Piñero in a candid, lighthearted moment with poet Sandra Maria Esteves on the subway. 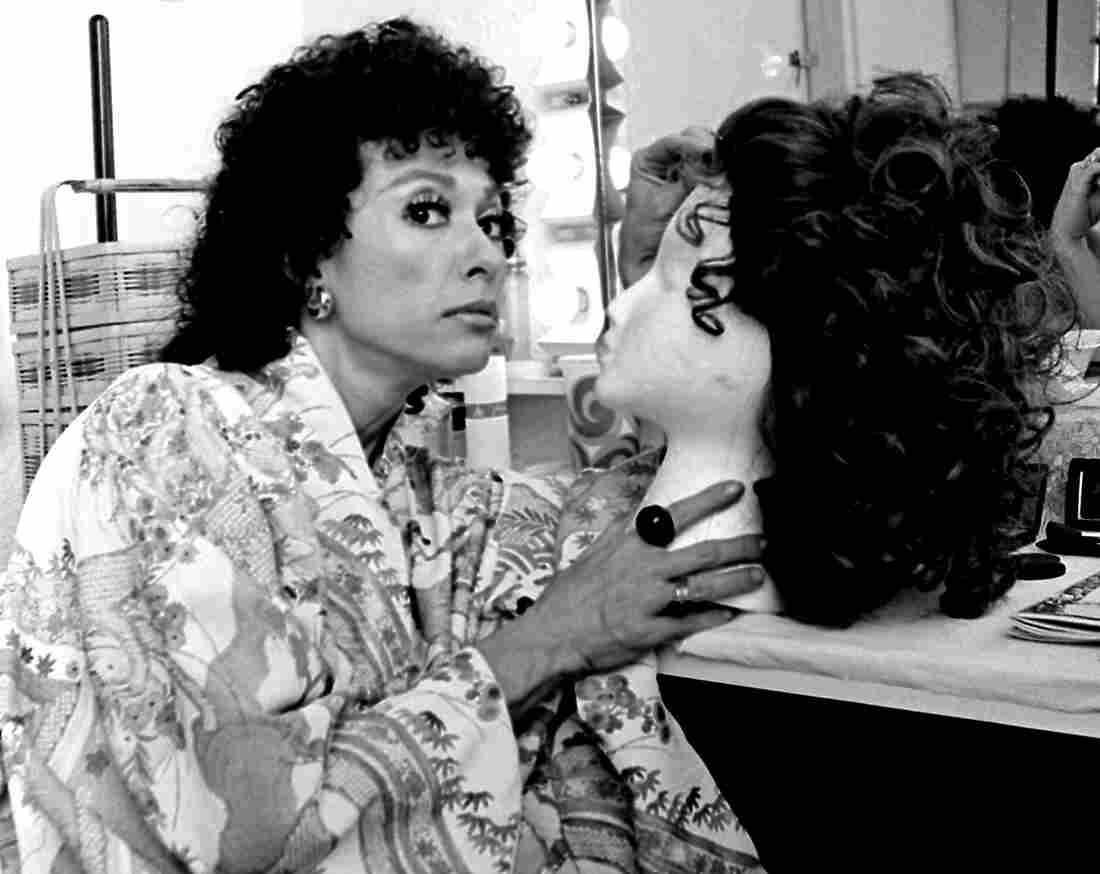 These kinds of experiences are rarely documented, Negrón-Muntaner says — like Arellano's shot of Puerto Rican entertainer Rita Moreno in her dressing room for a Broadway show, touching her wig while eyeing the camera.

Move along the gallery wall, and you're confronted with "La Calle," the street. "You had the ways that people start owning the street," she says, "the way they start occupying it." 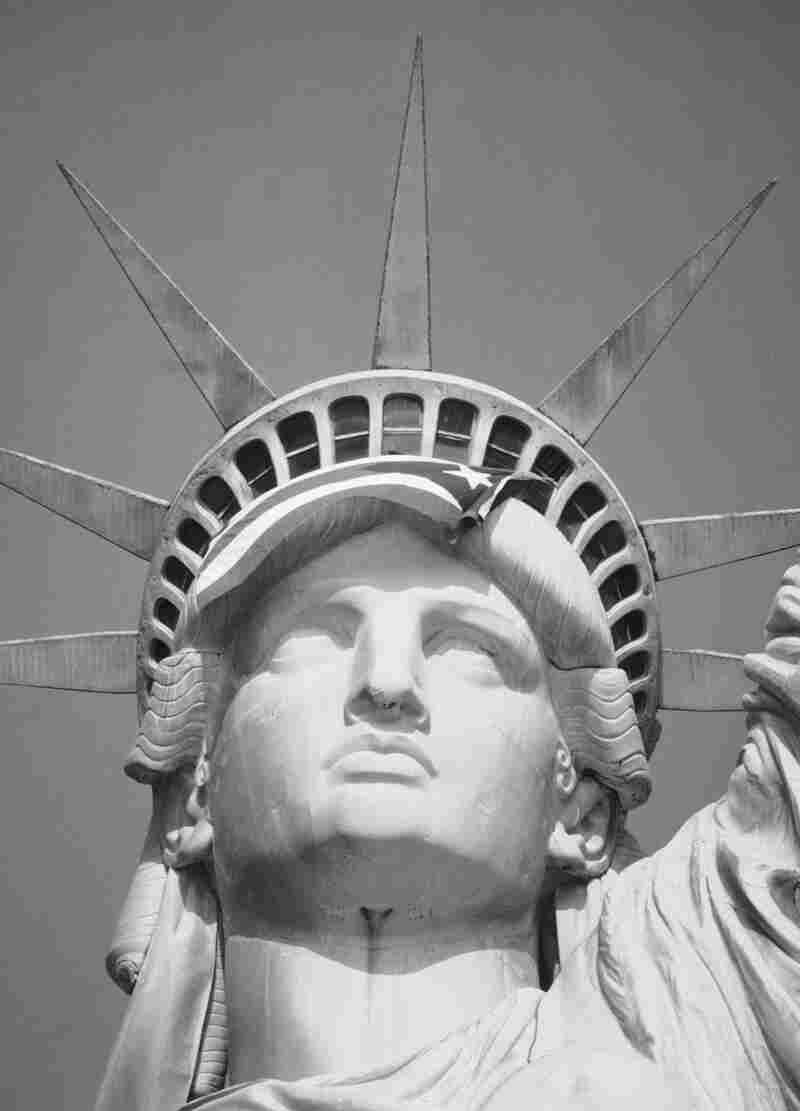 The Puerto Rican flag is draped across the crown of the Statue of Liberty on Oct. 25, 1977, after demonstrators occupied the monument. AP hide caption 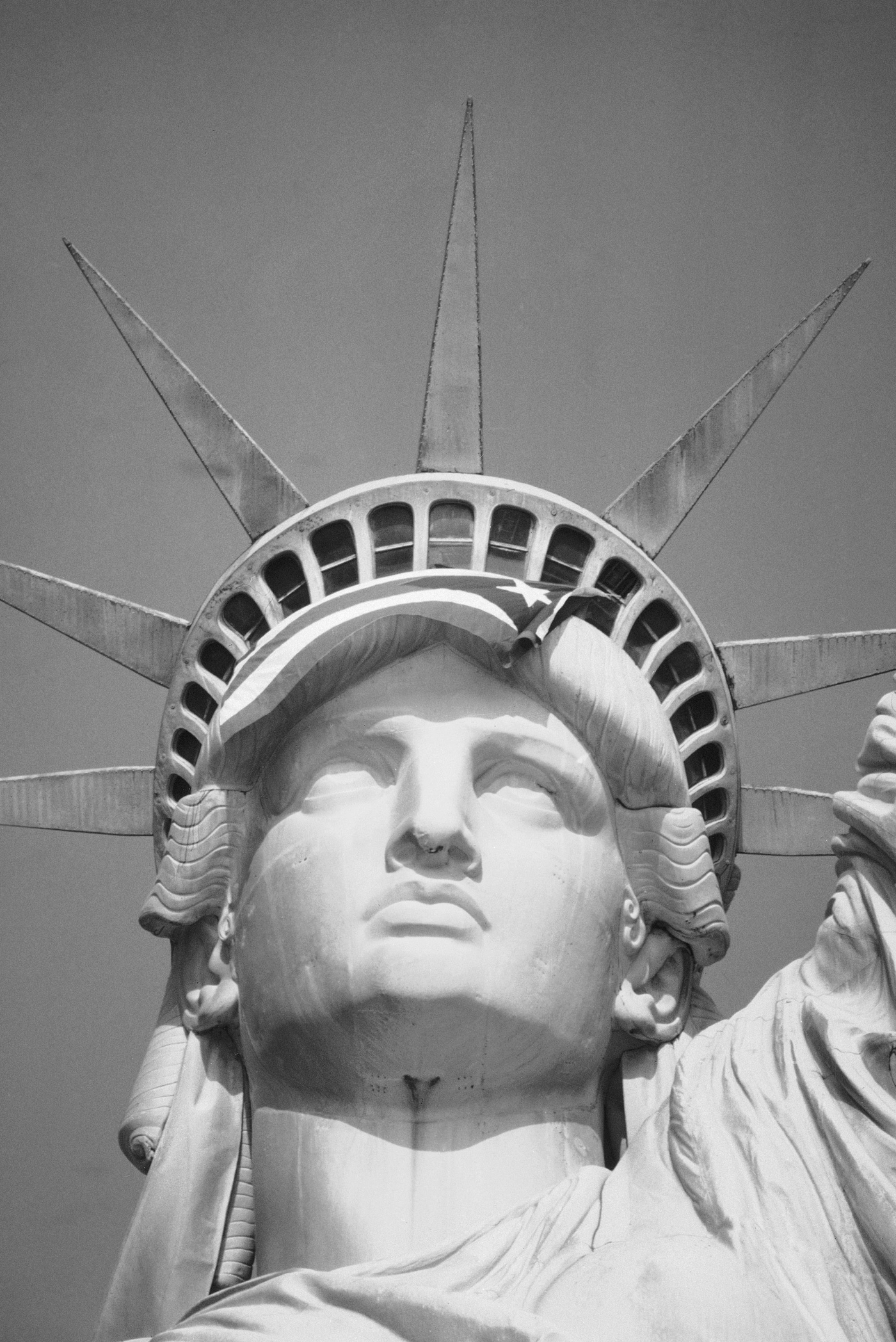 The Puerto Rican flag is draped across the crown of the Statue of Liberty on Oct. 25, 1977, after demonstrators occupied the monument.

A front page of El Diario in 1977 declared: "Boricuas Ocupan Estatua Libertad." Activists occupied the Statue of Liberty to protest the incarceration of Puerto Rican nationalists. The takeover lasted more than eight hours.

The Young Lords also took on the daily needs of local communities. Another headline in the mid-'70s read, "Hispanos del Sur del Bronx, El Barrio, Brooklyn, Viven Entre la Basura" (Hispanics of the South Bronx, Spanish Harlem and Brooklyn Live Amid Garbage). The fight for municipal services, like trash collection, was a trademark of the era.

Arellano's photos span the "richness and the range of the '70s politics," Negrón-Muntaner says.

An image of Brás joining hands with Black Panther Angela Davis at a unity protest in Madison Square Garden is next to Badillo in the exhibit.

Leaning in close, gesticulating with his hands and eyebrows, Arellano says he spent long hours covering news, sports and entertainment. He remembers a time when journalists moved about the city with ease, capturing intimate moments in hospitals, on the streets and backstage at high-profile venues.

Additional photos from El Diario's archive are displayed in three locations around the city as part of a series called "In the Headlines: Latino New Yorkers 1980-2001."

At the Medical Center exhibit on 168th Street, the display of images and front pages blends with the educational environment. The photographs are familiar to the building's security guards who live in the neighborhood. It's fitting to hear Spanish spoken in the hall. 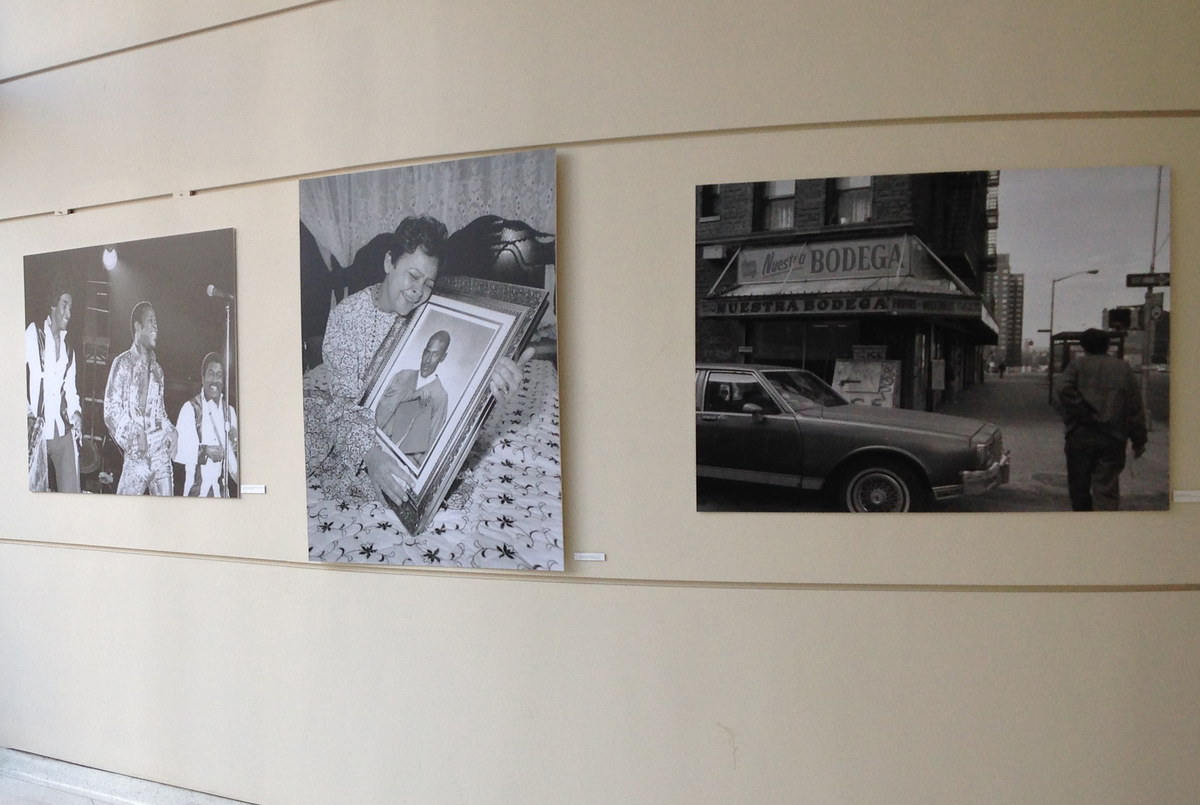 Just south is another exhibit, visible from the street. The six photographs are large and commanding, spanning music, entrepreneurship, police brutality and urban blight.

"There's a kind of beauty ... in that anguish that I was trying to capture," says curator Rich Blint, associate director of Columbia's Office of Community Outreach and Education.

He spent his days listening to a police scanner he bought, taking activists' tips on upcoming protests and combing The Associated Press daybook for events. He put in 16-hour days and filled El Diario's pages with his photos. He learned the language, too ("The New York Times is the best book to learn English").

Arellano insisted there is no signature style to his photography; he never had any formal training. He just shoots what catches his eye.

But there is something that distinguishes his work, according to Negrón-Muntaner. "When you look at these pictures, you really get a sense of the moment," she says. The photos convey the dynamics and the tension of the time, she says, whether it is between the police and a protester or between a performer and her audience.

As an immigrant, he had a "sympathetic eye" while photographing the Latino community, Negrón-Muntaner says: "There seems to be a relationship or an intimacy or an access that the photographer is able to communicate."

There is a nuance that is often missed by outsiders who might only focus on poverty and devastation, says David Gonzalez, co-editor of The New York Times Lens photography blog.

"His pictures reflect the complexity and the dynamism that was happening in the various communities of New York City," he says. Gonzalez wrote about Arellano and his work in June and considers him "one of the stalwarts of New York photojournalism."

El Diario has similarly made nuance a priority in its coverage over the years. Executive editor Gonzalez says they analyze the dominant narrative of a story and then add something to the conversation. "El Diario has really brought depth to this community," she says.

Arellano says he didn't need to focus on the negative aspects of Latino life because everyone else was already doing that.

Arellano never intended to show his photographs in a gallery. As a freelancer, he was working one shot at a time.

"You have no idea how I [mistreated] the negatives," he said amid the photos that somehow survived the decades since. Over the past seven years, he has been digitally archiving his tens of thousands of photos.

And yet, without the pictures that Arellano has managed to save, there wouldn't be a '70s exhibit for El Diario's centennial.

Javier Gomez was hired as a consultant by the paper to organize its 100th anniversary, which includes a series of events and coverage focused on legacy, education and preservation. They wanted to do a photo exhibit from the beginning.

"So we opened the archives to do an assessment to do a centennial exhibit of 100 years of Hispanic history — we realized that we only had 30 [years' worth]," Gomez says. "We couldn't believe it."

Practically all of the photos before the 1980s were completely ruined. There had been a flood at a previous location in lower Manhattan, then two moves. The paper decommissioned the archive when it switched to digital, leaving the images without oversight. Some photos were stolen and others misfiled. 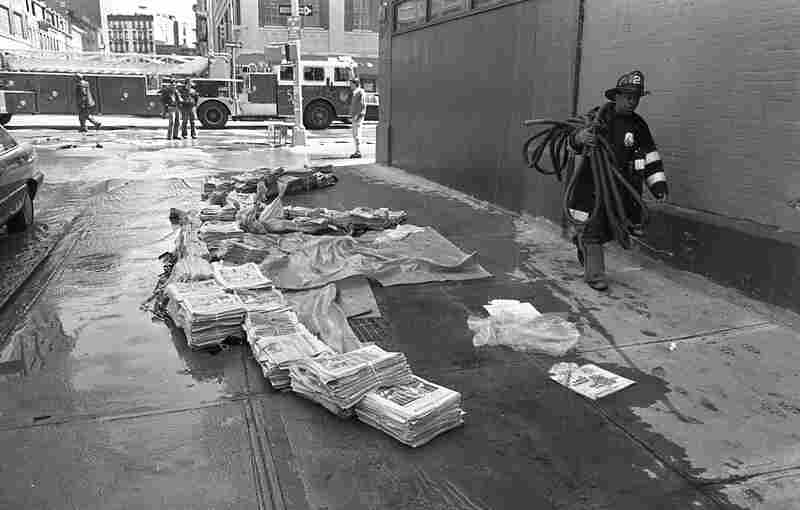 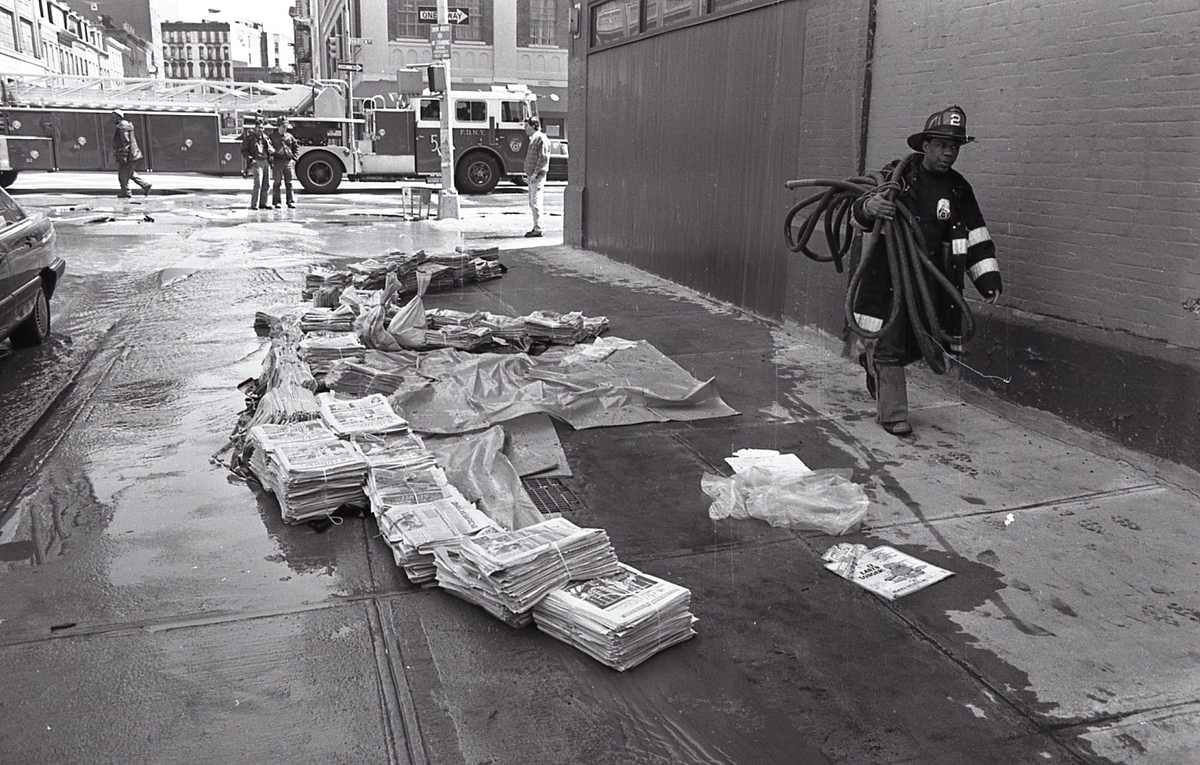 A flood at El Diario-La Prensa offices in April 1992 destroyed much of the Spanish-language daily's photographic archive.

"Laughable and terrifying at the same time," Gomez found stacks of images glued together.

"As we were reviewing them for the exhibit, we pulled some carefully, trying to open them like leaves in a book," he says. "We had to let it go. That's for experts to deal with."

Enter Columbia University. "We're very happy and very proud to get these to an archive," Gomez says. The university plans to index and digitize the thousands of images that were recovered, preserving them for El Diario-La Prensa and for the city.

After all, as the paper's executive editor put it: "We're not just a Spanish-language, Latino institution; we're a New York institution."