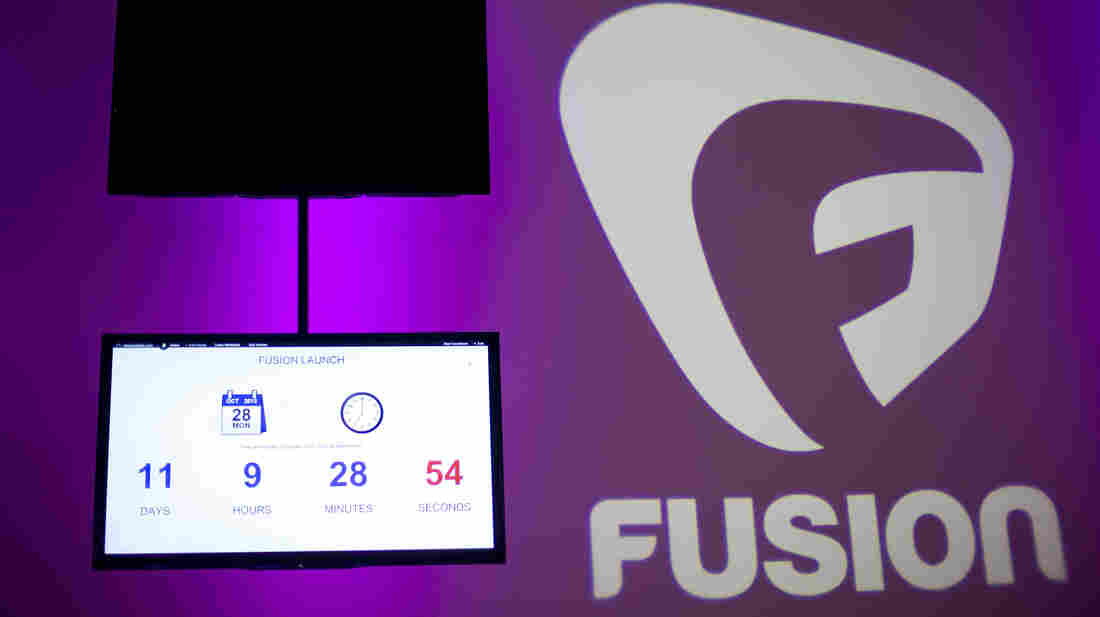 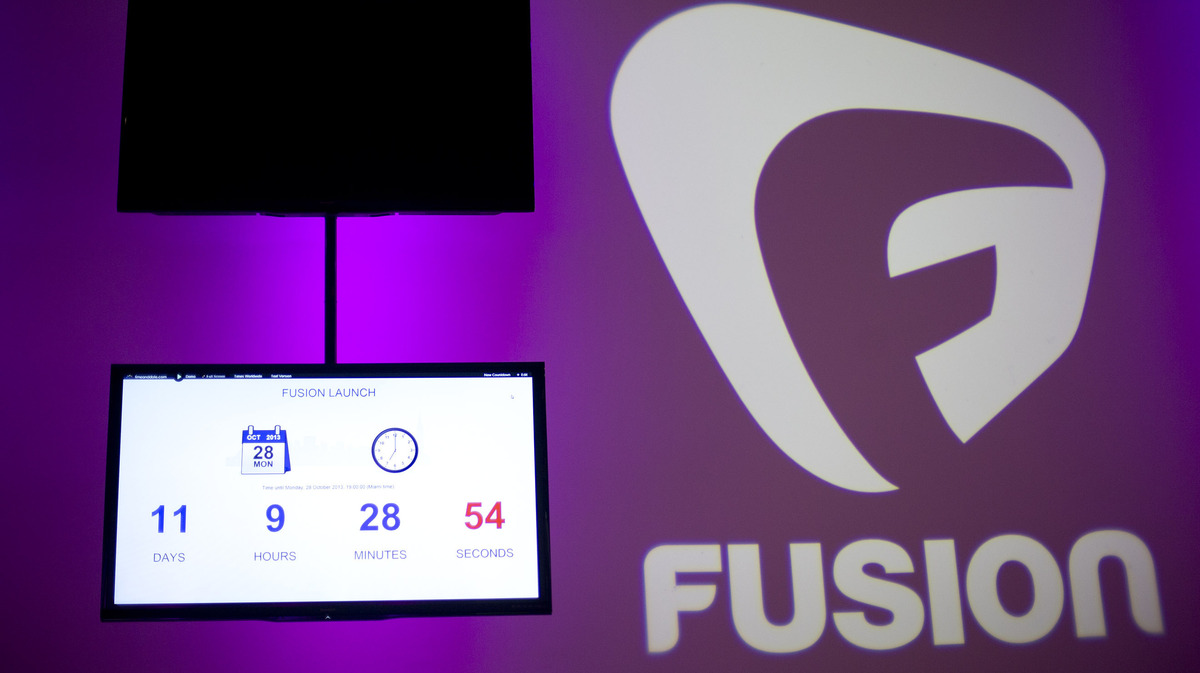 A countdown clock at Fusion's Miami studio tracks the time until the network's Monday launch.

The generation now coming of age in the U.S — sometimes called the millennials — is the largest ever. They pose a problem for television broadcasters: Many millennials watch little or no live TV.

On Monday, ABC and Univision are joining forces to launch a cable channel that hopes to change that. Fusion plans to attract a young audience by blending news with entertainment and humor. And it's aiming for a specific group of millennials — young Latinos.

For Univision, Fusion is something new: a channel broadcasting entirely in English. The Spanish-language network has prospered by programming for the fast-growing Hispanic population, but to maintain its connection with Hispanics, Univision is looking to the next generation — young Latinos who like their media in English.

Fusion shares its headquarters in a Miami suburb with Univision's news operation, in a warehouse transformed into a sprawling, high-tech newsroom. Most employees look like they're in their 20s and 30s — but not everyone. Fusion's programming chief, Billy Kimball, is a veteran writer and producer, with credits on The Simpsons, Saturday Night Live and CBS's Late Late Show, among others.

Like executives with other new cable channels, such as Pivot and Revolt, Kimball is trying to reach millennials, a prized but elusive target. With its Univision roots, Kimball acknowledges Fusion may have an advantage: About one-fifth of millennials are Hispanic. 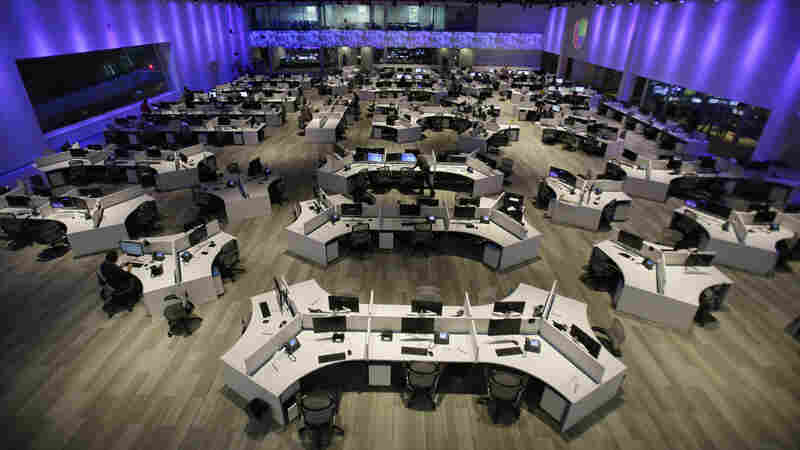 Fusion's open, high-tech newsroom is usually stocked with journalists who are, like the audience the new network hopes to attract, millennials themselves. Wilfredo Lee/AP hide caption 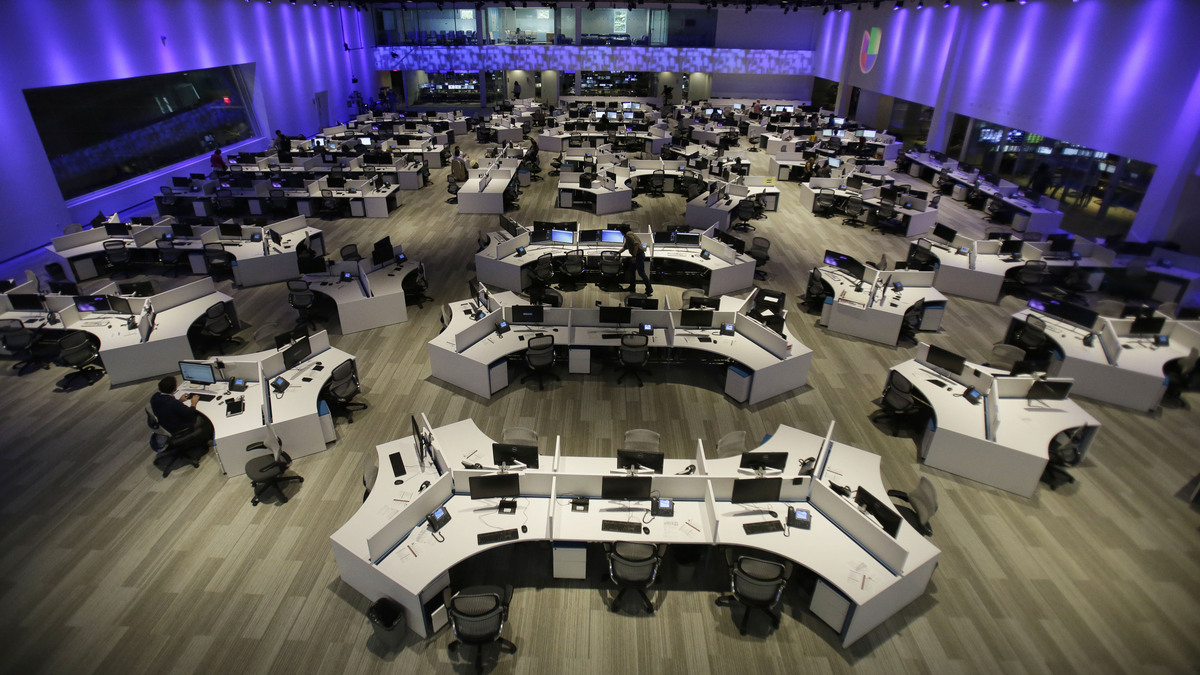 Fusion's open, high-tech newsroom is usually stocked with journalists who are, like the audience the new network hopes to attract, millennials themselves.

The key of Fusion's broadcast day will be a nightly newscast hosted by Univision's Jorge Ramos. After hosting the Fusion newscast in English, Ramos will walk next door to another studio for his Spanish-language broadcast.

Alicia Menendez, host of a nightly talk show, says Fusion will be a news channel, but with a twist.

Take, for instance, Fusion's morning show. It's a daily program that will have features, interviews and humor.

"Do you believe in small government?" a producer asks on an upcoming show segment. "I mean like if the government were composed only of small people — midgets, dwarfs, things like that. Don't you think that would be kind of awesome?"

Mariana Atencio, one of the hosts, is in her late 20s and Venezuelan. She'll share the table each morning with Brazilian journalist Pedro Andrade and Yannis Pappas, a Greek-American stand-up comedian.

"NPR meets the Daily Show," explains Atencio. "Those are the two things that we tell ourselves every single morning."

The time slot has some tough competition, but Atencio says her show won't look like others on morning TV. Like her and many in her audience, Atencio says the show will have a Latin touch.

"It's like me: I can say a word in Spanish if I forgot the word in English," she says. "Every time I don't pronounce something perfectly, Yannis, the comedian, he sings the West Side Story, the Rita Moreno song, 'I Want to Live in America,' because I don't have a green card yet. So it's those kind of fun things that point to the fact that we may not be 100-percent white Americans. But we still identify with the mainstream."

It's a big challenge to get millennials, an audience that shows little interest in live television, to turn on their TVs each morning. One strategy is to deliver the program in short segments that can be easily shared and downloaded. But the key, Atencio says, is making sure her show gives millennials not just the headlines, but what she calls "added value."

"Because young people already know the headlines," she says. "They see it on their phone when they wake up, on their iPad. So it's giving them that little something extra. It can be a comedy sketch. It can be an explainer."

When it launches Monday, Fusion will get a boost from its two parent companies, ABC and Univision. The morning shows of the two networks are joining to simulcast segments promoting Fusion and its new morning show.

Fusion is starting with 20 million potential households, but hopes to expand quickly. Kimball says the new network is gambling it can lure young viewers back to live TV.

"What we need to do is create something that's different," he says. "And yes, sure, that has some risk associated with it. But with 380 other cable channels out there, playing it safe has the most risk of all."