Accessibility links
Where Do 'Hoodlums' Come From? San Francisco : Code Switch The unexpected story of how the "young men and lads" who "commit acts of violence and mischief" came to be known as hoodlums. The term was first widely used in the 1870s in San Francisco, where gangs often targeted Chinese immigrants. 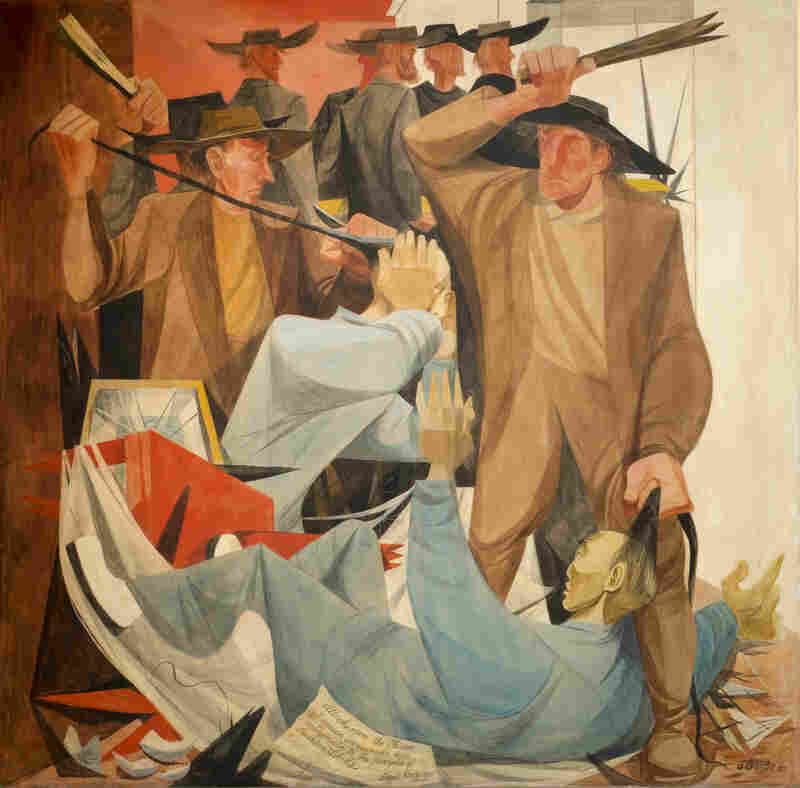 Anton Refregier's Beating the Chinese is a panel in the History of San Francisco mural at the city's Rincon Center. Chinese immigrants were frequent targets of hoodlums in the late 19th century. Carol M. Highsmith/Library of Congress hide caption 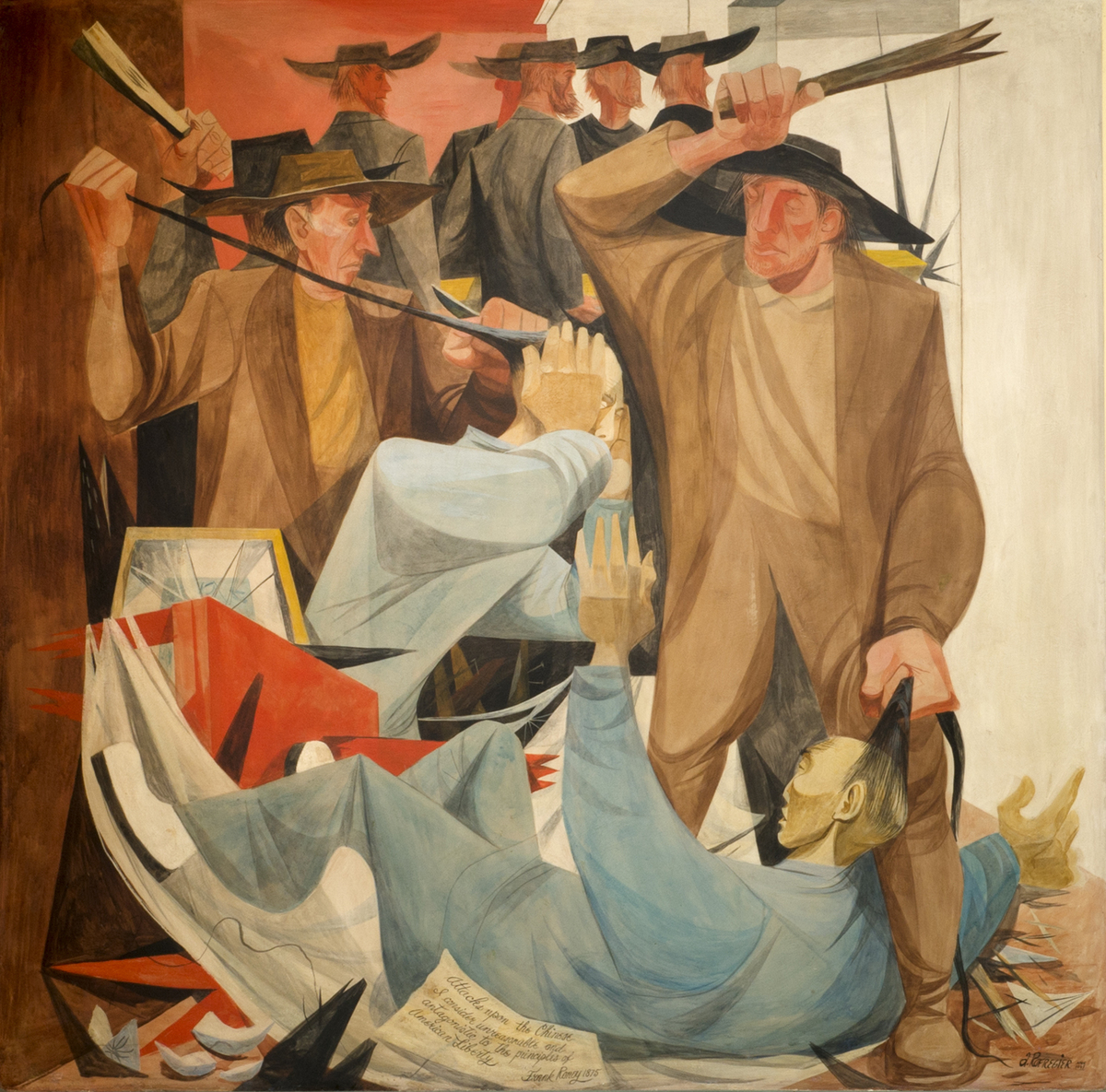 Anton Refregier's Beating the Chinese is a panel in the History of San Francisco mural at the city's Rincon Center. Chinese immigrants were frequent targets of hoodlums in the late 19th century.

Singer Chris Brown was in the news last week after being accused of punching a fan outside a Washington, D.C., hotel. Police later identified the alleged victim as 20-year-old Parker Isaac Adams. Brown maintains it was his bodyguard who threw the punch and only after Adams tried to board the singer's tour bus.

Adams' uncle came to his defense after the incident, insisting to reporters that his nephew wasn't a troublemaker.

"Parker's not some kind of hoodlum," Creighton Adams told the AP.

Hoodlum is a word that's been used for about 140 years to describe what Merriam-Webster Dictionary defines as "a tough and violent criminal" or "a young ruffian."

The exact etymology of hoodlum is unknown, but references to "hoodlums" roaming the streets of San Francisco first surfaced in the media in 1871. An article in the Cincinnati Commercial that year made reference to a young man who moved to the city to "escape the bullying of the San Francisco 'hoodlums.'"

On June 9, 1871, a cigar store owner named Ah Lee was beaten to death outside his store by a gang of young hoodlums, one of whom was only 14.

San Francisco's then-police chief Patrick Crowley took note of the gangs forming in the city in his 1872 annual report, noting: "There is one evil which I mention with regret ... it is the disposition on the part of many young men and lads to commit acts of violence and mischief."

Chinese workers were a frequent target of the "young men and lads" that Crowley mentioned. Chinese immigrants began to settle in the United States in the mid-19th century due to the California gold rush and the construction of the first transcontinental railroad. (By 1860, 6 percent of San Francisco's residents were of Chinese descent. Between 1869 and 1876, an average of 15,000 new Chinese workers arrived each year.)

It wasn't until an article in an 1875 issue of the magazine Scribner's Monthly that the word entered the mainstream. Writing about the gangs of young white men who were terrorizing certain San Francisco neighborhoods in his piece "The City of the Golden Gate," journalist Samuel Williams described them as follows:

"The Hoodlum is a distinctive San Francisco product. ... He drinks, gambles, steals, runs after lewd women, and sets buildings on fire. One of his chief diversions, when he is in a more pleasant mood, is stoning Chinaman. That the Hoodlum appeared only three or four years ago is somewhat alarming."

In his 1877 book The Chinese in America, Otis Gibson went into further detail about the ways a "San Francisco hoodlum" would harass the Chinese:

"They follow the Chinaman through the streets, howling and screaming after him to frighten him. They catch hold of his cue, and pull him from the wagon. They throw brickbats and missiles at him."

Anti-Chinese violence reached its peak in 1877, with the San Francisco riots of that year. Four Chinese were killed and more than $100,000 worth of property was damaged.

Five years after the riot, the Chinese Exclusion Act was signed into law. (The act severely restricted the immigration of Chinese to the United States for a decade. The restrictions were later made permanent before being repealed in the 1940s.) The New York Times attributed congressional passage of the bill to Democrats and Republicans competing for California votes: "The plain truth is that a violent and discourteous act was demanded by the hoodlum sentiment of the Pacific coast, and this demand has been listened to."

A resolution regretting passage of the Chinese Exclusion Act was approved last year by the United States House of Representatives. The resolution was introduced by Judy Chu, the first Chinese-American woman elected to Congress.