Accessibility links
What A Thug's Life Looked Like In 19th Century India : Code Switch Today's thugs can trace their literary ancestry to the highway robbers who formed the Thuggee Cult of India. The thuggees were hunted down, imprisoned or killed in the 19th century during British rule. 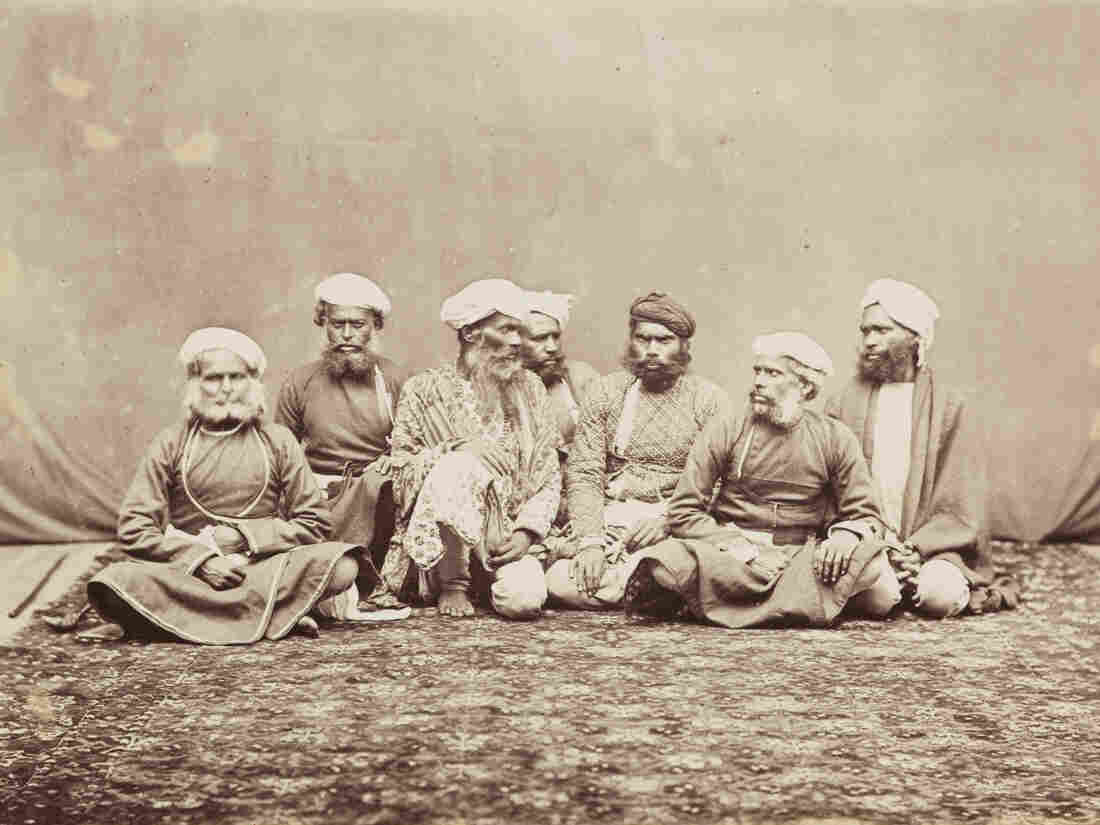 A photograph of a group of elderly men sitting on a mat, taken in Peshawar, now in Pakistan, circa 1865. Two of the men are looking at each other with contempt, suggesting that they may actually be enemies who have been persuaded to be photographed together as examples of native "thugs." Getty Images hide caption 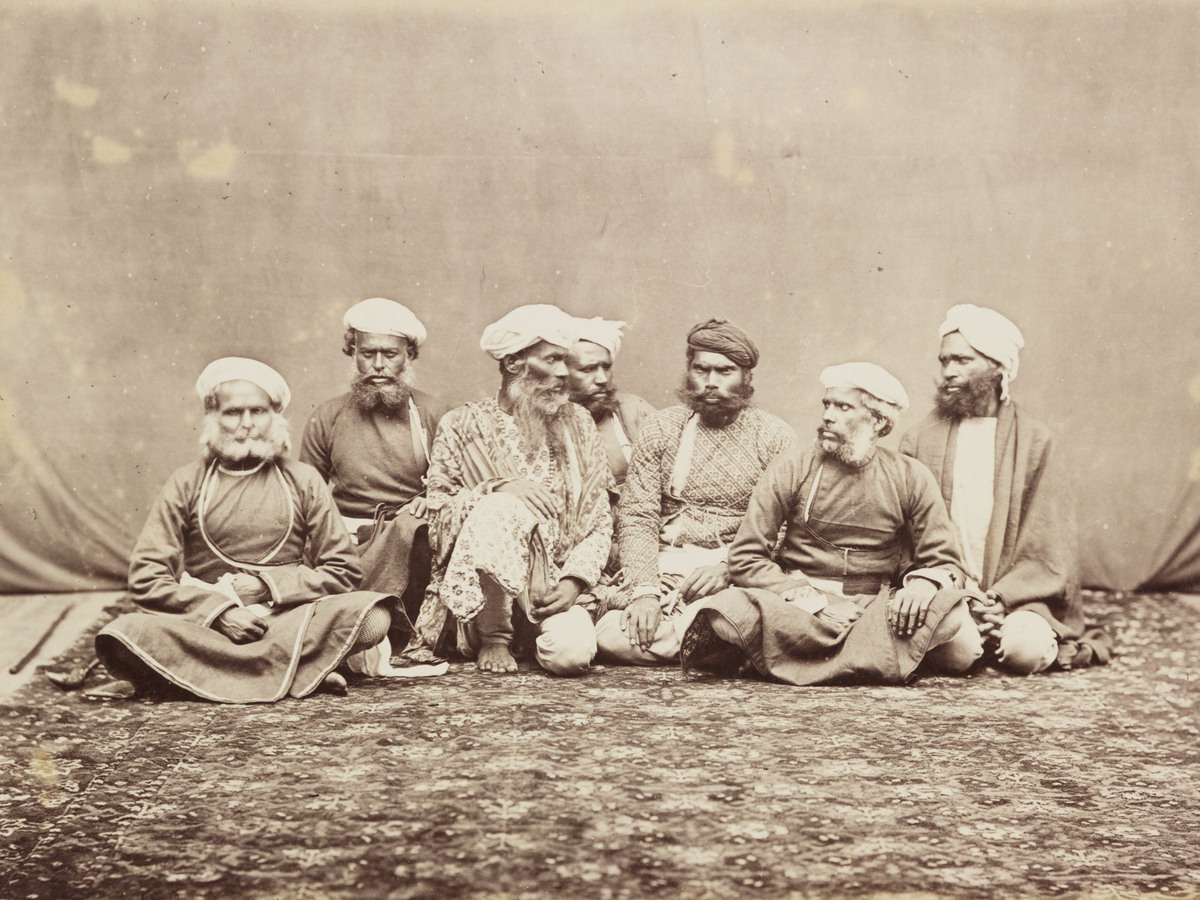 A photograph of a group of elderly men sitting on a mat, taken in Peshawar, now in Pakistan, circa 1865. Two of the men are looking at each other with contempt, suggesting that they may actually be enemies who have been persuaded to be photographed together as examples of native "thugs."

During a 1906 meeting of the Royal Society of Edinburgh, Sir William Turner submitted part three of his research "Contributions to the Craniology of the People of the Empire of India." Included were the photographs of individual skulls from a group who the British Medical Journal said "made it their business to frequent the great highways of India and become friendly with travelers, with a view to setting upon them and strangling them."

The word "thug" traces its roots to the Hindi and Urdu word thag, which means thief or swindler, and which itself is derived from the Sanskrit verb sthagati (to conceal). The word would enter the English language in the 1800s during the British imperial rule of India.

The skulls examined by Turner in the craniology study once belonged to members of what was called the "Thuggee Cult." The thuggees were believed to be a professional organization of criminals and assassins who reportedly had strangled thousands of people on India's roadsides.

They were widely portrayed as "born criminals" who worshipped Kali, the Hindu goddess of death and destruction. "The profession of a Thug, like almost every thing in India, is hereditary," according to the 1837 book Illustrations of the History and Practices of the Thugs.

The first printed reference to a "thug" appeared in Ziau-d din Barni's History of Fīrūz Shāh, which was written in about 1356. However, the thuggees as a group weren't "discovered" by the British or even widely discussed until the 1830s. That's when the British governor-general of India, Lord William Bentinck, and Capt. William Sleeman made a concerted effort to eradicate the thuggees from India.

Nearly 4,000 thugs were discovered and, of those, about 2,000 were convicted; the remaining were either sentenced to death or transported within the next six years. Sleeman then declared the thuggee to be completely eradicated.

"The system is destroyed, never again to be associated into a great corporate body. The craft and mystery of Thuggee will not be handed down from father to son," Sleeman said.

As Sleeman's use of the words "craft" and "mystery" hint at, the thuggees continued to capture a place in the British imagination even after they were eliminated. The 1839 novel Confessions of a Thug, by Philip Meadows Taylor, quickly became a best-seller in England and beyond, and was instrumental in introducing the word "thug" to the greater population. Taylor's novel was a first-person narrative by Ameer Ali, as he lays bare the secrets of his life and his crimes. (Meadows Taylor had worked with Sleeman on the effort to eliminate the thuggees and claimed Ameer Ali was based on a man he had encountered.)

Mark Twain wrote extensively about the thuggees in two chapters of his classic 1897 travelogue, Following the Equator. As critic Gladys Carmen Bellamy notes, Twain "found India a strange and sinister land," and these feelings are quite clear in his descriptions of Thuggees. Twain devotes page after page of the book to describing exactly how the Thugs killed their victims; one chapter is titled "Eradication of Thuggee."

Twain also draws a parallel between India's Thugs and Westerners in this passage:

"The joy of killing! The joy of seeing killing done — these are the traits of the human race at large. We White people are merely modified Thugs; Thugs fretting under the restraints of a not very thick skin of civilization; Thugs who not long ago enjoyed the slaughter of the Roman arena ..."

The mystique of the Thuggees was also portrayed in the 1960 film The Stranglers of Bombay (which was originally titled The Horror of Thuggee), in which a British army captain in 1930s Bombay investigates the murders of both the English and Indians by the Thuggee.

The Thuggees would briefly re-enter the public imagination in the early 1980s when Harrison Ford starred in Indiana Jones and the Temple of Doom (a character based on William Sleeman also appears). In the film, the hero agrees to both recover a lost stone and rescue a group of young children who had been abducted by the Thuggees. This portrayal of India and its people was widely criticized by South Asians.

Some historians now argue that the Thuggee Cult was in many ways an invention of the British colonizers as a way to better control India. Historian Martine van Woerkens argues in her book The Strangled Traveler: Colonial Imaginings and the Thugs of India that the Thuggee Cult may have been the result of "colonial imaginings," and that the brutality used to suppress the group has been overlooked.

Along those lines, the Los Angeles-based band Thuggee Cult says it chose the name in part as an attempt to take back the word and return it to its pre-colonial roots. "The idea of Thuggee Cult, it is anti-colonial," says band member Suleiman Hodali. "The label itself has been appropriated. We're trying to reclaim the word from its anti-colonial history."

Here in the United States, the word thug has long been a staple in rap lyrics. According to the invaluable site Rap Genius, "thug" appears in either the name of the artist or in the lyrics of over 4,800 songs. And Tupac Shakur famously had "Thug Life" tattooed across his abdomen.

Not everyone is happy with the prevalence of thug culture in hip-hop. As Tricia Rose writes in her book The Hip Hop Wars: What We Talk About When We Talk About Hip Hop and Why It Matters: "The thug both represents a product of discriminatory conditions and embodies behaviors that injure the very communities from which it comes."

In the publishing world, "thug lit" refers to a genre of fiction that is trying to break into the mainstream. Best-selling author Wahida Clark's website calls her the "Queen of Street Literature." Clark is signed to Cash Money Content, a Simon and Schuster imprint that's operated by the Cash Money record label, which is home to rappers Nicki Minaj, Lil Wayne and Drake.

Recently there's been a spate of blogs that reclaim the word "thug" in an ironic way. The blog Thug Kitchen shares recipes and cooking tips. As its FAQ section says: "Everyone deserves to feel a part of our country's push towards a healthier diet, not just people with disposable incomes who speak a certain way."

Check out the mildly NSFW summary of Heart of Darkness below. (Sample quote: "When it comes to swinging ivory for clean dollars, this fool Kurtz got the Congo sewn up.")