Accessibility links
'Go Shorty, It's Your Birthday' And Other Black Bons Mots : Code Switch This week marks the release of Bartlett's Familiar Black Quotations. Which leads us to the question: Just what is a black quote, anyway?

'Go Shorty, It's Your Birthday' And Other Black Bons Mots

'Go Shorty, It's Your Birthday' And Other Black Bons Mots 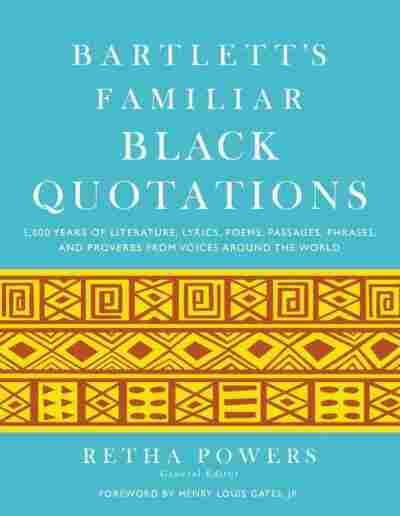 A press copy of a 3-pound book recently came over the wholly metaphorical Code Switch transom. It's called Bartlett's Familiar Black Quotations, and it's kind of amazing.

On the face of it, the book might seem like an odd, unwieldy exercise. Jokey alternate titles for the book immediately presented themselves: Black People Say the Darnedest Things; #%$! Black Folks Say; Bartlett's Big Book of Black-Ass Quotes. I opened it half expecting to see some gems my aunts or cousins might have offered up. ("Scared money don't make money." "2 Blessed 2 B Stressed!" "This an A and B conversation, so you can C your way out!")

But really quickly, it becomes obvious just how herculean a task cobbling all of this stuff together must have been for its editor, Retha Powers. It's a meaty, motley collection, several inches thick, and boasting — per Bartlett's style — a serious and completely inscrutable index. Henry Louis Gates Jr. wrote the foreword and called the book "the finest thought produced by writers throughout the African Diaspora."

That lofty description — Gates ain't really inclined to understatement — does not make the book's putative binding principle clear. (Marion Barry's notorious profane exclamation, in which he laments being deceived by a dishonest woman, makes an appearance.) Alongside it are long excerpts from famous speeches or essays, lyrics to soul music and hip-hop, some short poems and other musings, all arranged in chronological order, from oldest to most recent.

But it leaves us with a question: What makes a statement or quote a "black quote"? Is it simply that it was uttered by a black person? Or must the quote have to say something essential and ineffable about blackness?

Here are some quotes from the book for your consideration, chosen more or less at random.

You dance because you have to.

Are we here to communicate? Are we here for cultural interchange? Then let us not be narrow. Let us not be small and selfish. Let us aspire to be as great in our communication as were the forefathers of our people, whose struggles made our being here possible.

This is the crime of which I accuse my country and my countrymen, and for which neither I nor time nor history will ever forgive them, that they have destroyed and are destroying hundreds of thousands of lives and do not know it and do not want to know it. ... But it is not permissible that the authors of devastation should also be innocent. It is the innocence which constitutes the crime.

We are never assured of justice without a fight.

Go shorty, it's your birthday.

The more time I spent with the book, the more deeply I was drawn down into the rabbit hole. Because of the way the book is organized, you get a snapshot of the fascinations of black luminaries and thinkers. The middle of the 20th century finds all kinds of people thinking thoughtful and urgent things about The State of Black People. (It's always good to be reminded that Fannie Lou Hamer was a badass.) And then — boom — Ray Charles is singing about the woman across town that he's creeping with. The tenor of the quotes changes as the book moves forward in time. So does their form. Scripture gives way to abolitionist entreaties; lyrics from soul music give way to hip-hop's staccato cadences. It all seems a little random, but there's serendipity in stumbling onto something juicy in that randomness.

Like any work of history — because that's what this is, really — it's the choices about what to include and leave out that are the most telling. Why that passage from Frantz Fanon or that particular Jay-Z lyric?

We'll be coming back to this book. Meanwhile, tell us which quotes should be in this collection.