Accessibility links
Mexican-American Vets Ignited Kennedy's Latino Support : Code Switch Most politicians recognize the importance of the Latino vote, but John F. Kennedy might have been the first presidential candidate to actively court it. Viva Kennedy clubs started by former Mexican-American veterans were an important factor in Kennedy's 1960 victory. 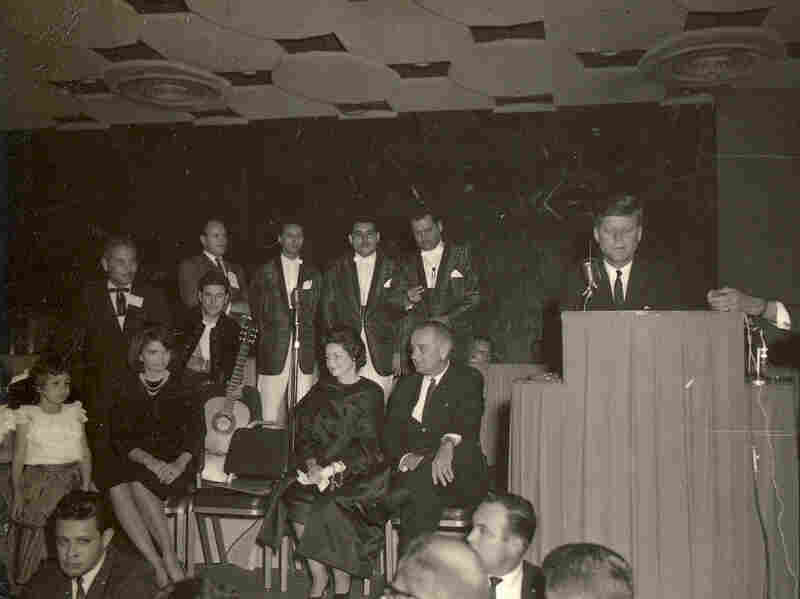 President John F. Kennedy speaks to Mexican-American activists at a LULAC gala in Houston's Rice Hotel on Nov. 21, 1963, the day before he was assassinated. Alexander Arroyos/AP hide caption 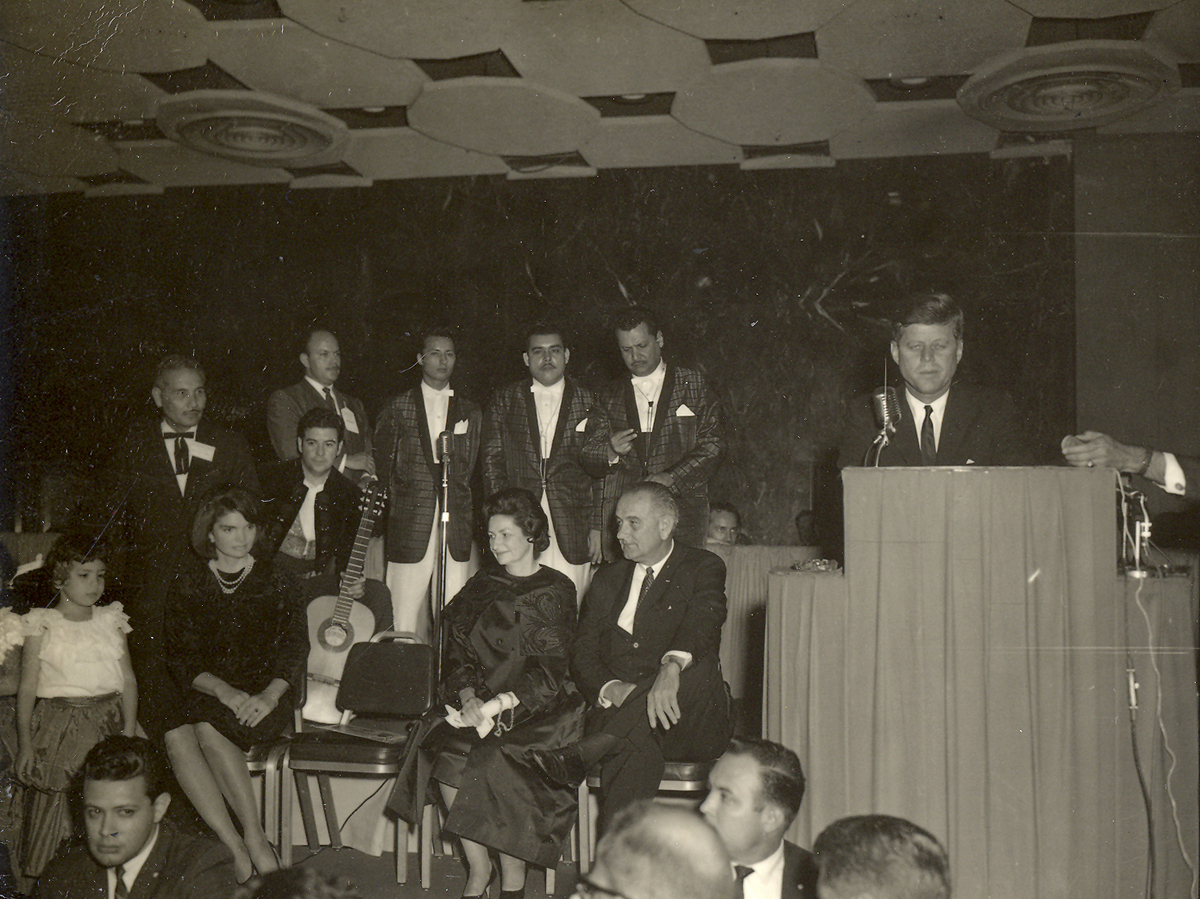 President John F. Kennedy speaks to Mexican-American activists at a LULAC gala in Houston's Rice Hotel on Nov. 21, 1963, the day before he was assassinated.

On the evening of Nov. 21, 1963, President John F. Kennedy, his wife Jacqueline, Vice President Lyndon Johnson and his wife, Lady Bird, walked through a wall of applause to take their place as honored guests in a Houston ballroom. They were making a brief stop at a formal dinner held by LULAC — the League of United Latin American Citizens — to show their appreciation for the Mexican-American votes that had helped the young president carry Texas in the 1960 election.

The crowd eventually settled down to hear the President tell them that Latin America was not just a friend, but a partner in the peace and prosperity he hoped the entire hemisphere would come to enjoy. And to make sure they understood him completely, he grinned at the crowd: "I'm going to ask my wife to say a few words."

Jacqueline Kennedy, dressed elegantly in a black Persian lamb suit and draped in pearls, stepped to the podium. Smiling, she told the audience how happy she was to be in Texas that evening — and how especially happy she was to be with them. "Estoy muy contenta..." she began, in her trademark whispery voice.

After years of being regarded as second-class citizens, denied access to some places and sent to the back door of others (often helpfully guided by not-uncommon signs that declared "no dogs, Negroes or Mexicans"), here was the respect LULAC's members long had been striving for. For the first time, a sitting president of the United States had chosen to visit a Hispanic group. Of the deluge of invitations that flooded the White House when the whirlwind trip through Texas had been announced, he had chosen them. After the Kennedys' brief remarks, the room rang with cries of "Viva Kennedy! And viva Jackie!"

Texas had been hugely important to Kennedy in his 1960 campaign. There were tens of thousands of potential voters in Mexican-American communities across the state, but until the late '50s and early '60s, many people chose not to vote. An expensive poll tax meant many poor Mexican-Americans couldn't afford to vote. And the slate of candidates offered by both parties was often too conservative (and yes, sometimes racist) to entice potential voters.

Veterans who'd returned from World War II and Korea expecting their service would open otherwise closed minds quickly found not much had changed, says Professor Ignacio Garcia, who teaches history at Brigham Young University and who is the author of Viva Kennedy: Mexican Americans In Search of Camelot.

"[Veterans] assumed that things would change, that they would be like they were in the foxhole, or the military unit," Garcia explains. "And when they came back and discovered things were not changed, they became very adamant about changing things."

One particularly adamant veteran was physician Hector P. Garcia (no relation), a former Army major who'd spent years pressing the Veterans' Administration to deliver services in a timely manner to Mexican-American vets. Dr. Garcia founded the American G.I. Forum as a civil rights group that enabled Mexican-American vets to press for equity. When they heard the young senator from Boston talk about wanting all Americans to contribute to move the country forward, they decided to back him. The forums, located in several cities in Texas and a few other states, became the vehicle for Viva Kennedy clubs. And the clubs, says Ignacio Garcia, "were probably the last time an ethnic constituency operated totally independently of one of the major parties. No memos, no talking points, no directives."

"Here's my mother, a dignified woman, jumping up and down — I just looked at her, like, Mama!"

Wanda Garcia, on her mother's support for Kennedy

The Viva Kennedy clubs planned and funded their own events, and they drew people by the thousands. Hector Garcia died in 1996, but his daughter Wanda vividly remembers the excitement at the Viva Kennedy-sponsored rallies. "He was like a rock star," she recalls. Even her normally reserved mother wasn't immune. At a rally, Wanda says she was astonished to look over and see her mother as frenzied as any of her own high school pals: "Here's my mother, a dignified woman, jumping up and down — I just looked at her, like, Mama!"

After the election, John F. Kennedy sent telegrams to the Viva Kennedy leaders, thanking them for their hard work, and saying it had made a considerable contribution to his Texas victory. But by the third year of his presidency, the Mexican-Americans who'd been so enamored of him were disappointed. They'd hoped their support would be rewarded with the placement of Latinos in important administration positions, but Kennedy had been very slow about moving in that direction.

Wanda Garcia remembers her father having terse conversations with Attorney General Bobby Kennedy about the need to do much more for the people who'd given his brother a victory in a critically important state.

So the trip to Texas — besides being an attempt to mediate the fight between gubernatorial challenger Don Yarborough and Governor John Connally — was designed to show Mexican-American voters that Jack Kennedy was ready to rededicate himself to their interests.

Max Krochmal, a history professor at Texas Christian University in Fort Worth, says Kennedy's election in the fall of 1960 was a wake-up call: Politicians saw they could no longer take the Mexican-American vote for granted. And Mexican-American voters got a glimpse of what their political power could accomplish: "The Viva Kennedy campaign really produced a sense of unity among Mexican Americans rarely seen before or after," Krochmal says.

The LULAC dinner, then, was a new beginning. But it was also the end, because the next day, Kennedy would be assassinated in Dallas. But the Viva Kennedy clubs, and his appearance in Houston on Nov. 21 cemented a relationship between Democrats and many Mexican-Americans that continues today.