Accessibility links
A History Of Indentured Labor Gives 'Coolie' Its Sting : Code Switch Although the slur today is used mostly in the context of the Caribbean, in the past it was often applied to low-wage, immigrant laborers in the United States. 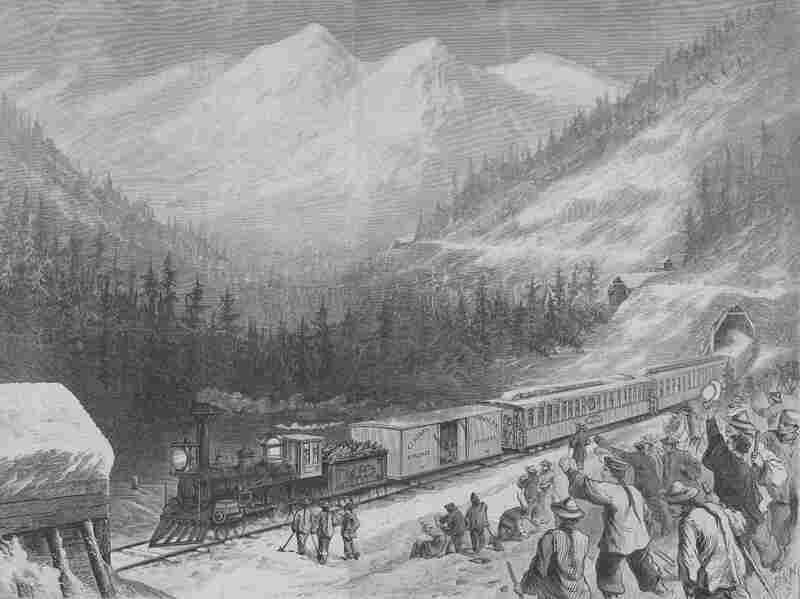 Nine out of 10 workers on the transcontinental railroad were Chinese. These indentured laborers, derogatorily called "coolies," became a prime target for criticism in the mid-19th century. Joseph Becker/Library of Congress hide caption 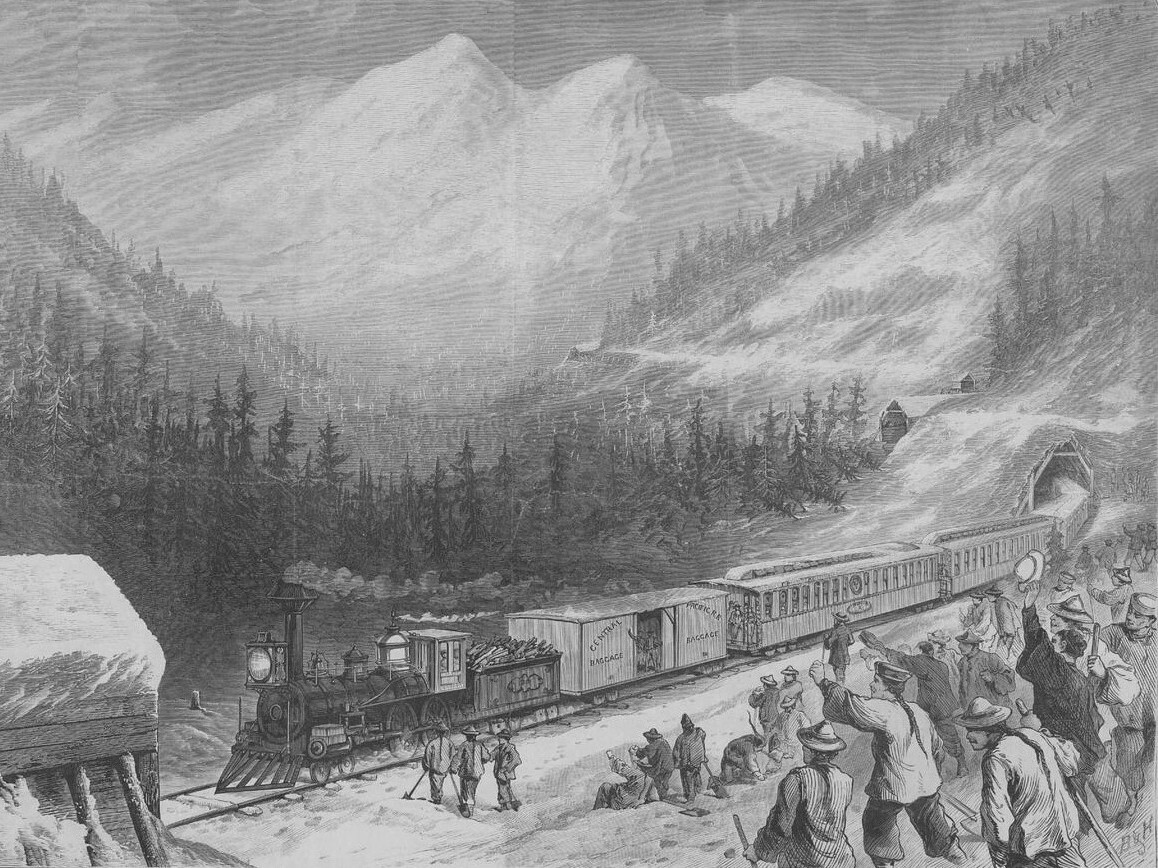 Nine out of 10 workers on the transcontinental railroad were Chinese. These indentured laborers, derogatorily called "coolies," became a prime target for criticism in the mid-19th century.

In her recently-released book Coolie Woman, author Gaiutra Bahadur traces the life story of her great-grandmother, who boarded an indenture ship in Calcutta in the early 1900s. The book has been getting lots of press, including here at NPR, and has also brought the word "coolie" — a largely forgotten term with a racially charged history — back into the public spotlight.

"[Coolie] was the bureaucratic term the British used to describe indentured laborers," Bahadur recently told NPR's Tell Me More. "But it became a highly charged slur. So naming the book Coolie Woman was controversial. I did it because to me, the women who migrated as indentured laborers carried enormous burdens."

Bahadur's great-grandmother was one of thousands of Indians who would sign indenture contracts with British companies and go to work in the sugar cane fields of the Caribbean.

"In India — in the subcontinent — a 'coolie' is someone who carries baggage," said Bahadur. "And these women sort of carry the baggage of colonialism; the expectations of white men, the expectations of Indian men. Here they have to sort of preserve family, preserve culture."

While the word today is usually associated with the history of the Caribbean, in fact, "coolie" had long been used a slur against low-wage, immigrant laborers in the United States.

Branch Rickey, the legendary general manager of the Brooklyn Dodgers and the St. Louis Cardinals, is best known to posterity for breaking baseball's color line by hiring Jackie Robinson from the Negro Leagues. But his other baseball legacy was the invention of the farm system whereby, as Jimmy Breslin described it, Rickey "gathered players of promise and grew them, like crops, on minor league teams, or farm clubs." Rickey was known for being a savvy and tightfisted businessman.

Jimmy Powers, a columnist for the New York Daily News, dubbed Rickey "El Cheapo." In 1950, just as Spring Training was about to begin, Powers accused Rickey of paying his players "coolie wages" after two members of the team were reportedly asked to take pay cuts. Rickey denied underpaying his players. But, this was not the first time Rickey had been accused of being tightfisted with player salaries. Many years before, infielder Leo Durocher tried to block his trade to the St. Louis Cardinals. In a private meeting after the trade was announced, Durocher taunted Rickey and reportedly said, "I've heard about your chain gangs and your coolie wages and I don't want any part of it."

So what, exactly, is a coolie? And how much do they get paid?

The dictionary definition of "coolie" is simply "a hired laborer." But the term quickly became synonymous with the thousands of East and South Asians that traveled to the Americas as part of a system of indentured labor used throughout the British colonies.

It's widely believed that the word "coolie" is derived from the South Indian language Tamil, in which the word "kuli" means wages (similar-sounding words with equivalent definitions exist in several other South Asian languages as well). The word would enter the English language in the 1830s, as the indentured labor system gained currency as a replacement for the use of slavery in the British Empire.

Although the word "coolie" is primarily associated today with the histories of the Caribbean and South America, indentured labor was a widespread reality in mid-19th century America. Companies like the Central Pacific Railroad Company signed laborers to five-year contracts (these laborers, among other things, were instrumental in building the transcontinental railroad and other projects in the Western United States). Due to the fact that the laborers were Asian — 9 out of 10 workers on the railroad were Chinese and the remainder were Irish — and because the workers would labor for low wages and live in substandard living conditions, the word "coolie" became a derogatory code for "Asian" (both East and South) in the United States. The workers were a prime target for criticism by labor leaders, politicians and ordinary citizens, who believed the foreign laborers were depressing wages and unfairly taking jobs.

The anti-Chinese labor sentiment was so high that in 1862, Abraham Lincoln signed an "anti-coolie" bill that "banned transportation of 'coolies' in ships owned by citizens of the United States of America." Despite the Anti-Coolie Law and the subsequent Chinese Exclusion Act (which passed in 1882 and prohibited Chinese workers from entering the United States), labor leaders and others continued to fear an influx of "coolie labor," especially after the rise of American imperialism in the late 1800s and the early 1900s.

In an 1898 speech titled "Imperialism — Its Dangers and Wrongs," labor leader Samuel Gompers, who was then President of the American Federation of Labor, openly worried about what the potential annexation of the Philippines would mean for American workers.

"If the Philippines are annexed, what is to prevent the Chinese, the Negritos and the Malays coming to our country? How can we prevent the Chinese coolies from going to the Philippines and from there swarm into the United States and engulf our people and our civilization? If these new islands are to become ours, it will be either under the form of Territories or States. Can we hope to close the flood- gates of immigration from the hordes of Chinese and the semi-savage races coming from what will then be part of our own country?"

The discussion of Chinese labor and the "coolies" would surface again during the construction of the Panama Canal. After intense initial resistance, the Theodore Roosevelt administration elected to allow "coolie labor" to work on the canal in 1906. The laborers who would end up working on the canal would be hired through contractors, a workaround that allowed the United States to use Chinese labor without interacting with the Chinese government.

The decision to use "coolie labor" on the canal was a reversal of course for Theodore Roosevelt. In his 1905 State of the Union address just a year earlier, he had specifically raised the issue of indentured labor from China:

"The conditions in China are such that the entire Chinese coolie class, that is, the class of Chinese laborers, skilled and unskilled, legitimately come under the head of undesirable immigrants to this country, because of their numbers, the low wages for which they work, and their low standard of living. Not only is it to the interest of this country to keep them out, but the Chinese authorities do not desire that they should be admitted."

Roosevelt made a vocal distinction between the "coolie class" and Chinese businessman and students, who he said were welcome. "We will admit all Chinese, except Chinese of the coolie class, Chinese skilled or unskilled laborers."

Throughout his career, Samuel Gompers would protest against the use of indentured labor. He criticized President Harding's plan to allow Chinese "coolies" into Hawaii to work on the sugar plantations in 1920. Harding's policy was a reversal of course for the United States. The word would also be used during both World War II and the Vietnam War to refer to the Asian laborers and farmers recruited to work for soldiers during the conflict.

Despite (or perhaps because of?) the anti-Asian sentiment that existed in the United States in the first half of the 20th century, the word "coolie" was also often used by fashion designers to describe Asian inspired clothes and accessories. There were "Coolie hats", "Coolie coats" and "coolie pajamas", among other things.

(And, in case you were wondering, a "coolie coat" is "just the thing to wear over your bathing suit at the beach.")

Today, the word "coolie" has largely faded from use in everyday life. (No one, for example, would dream of calling an anti-immigration measure an "anti-coolie" law today.) But for many in the Caribbean community, the word is a painful reminder of the troubled history of indentured labor in the Americas.