Accessibility links
Single Muslim Hipster Seeking Same? You May Be In Luck. : Code Switch For some young Muslims, balancing Islamic values with American traditions isn't always easy, especially when it comes to relationships. The new website Hipster Shaadi aims to help them find a match.

Single Muslim Hipster Seeking Same? You May Be In Luck.

Single Muslim Hipster Seeking Same? You May Be In Luck. 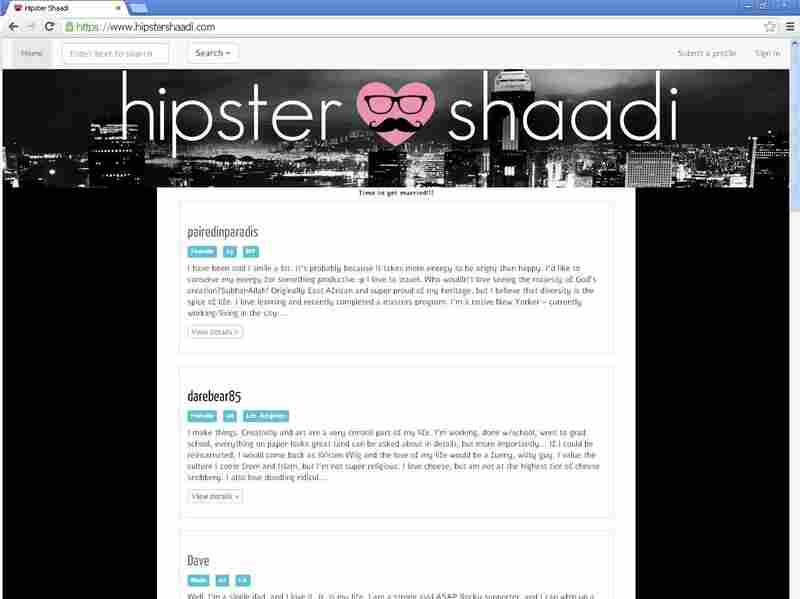 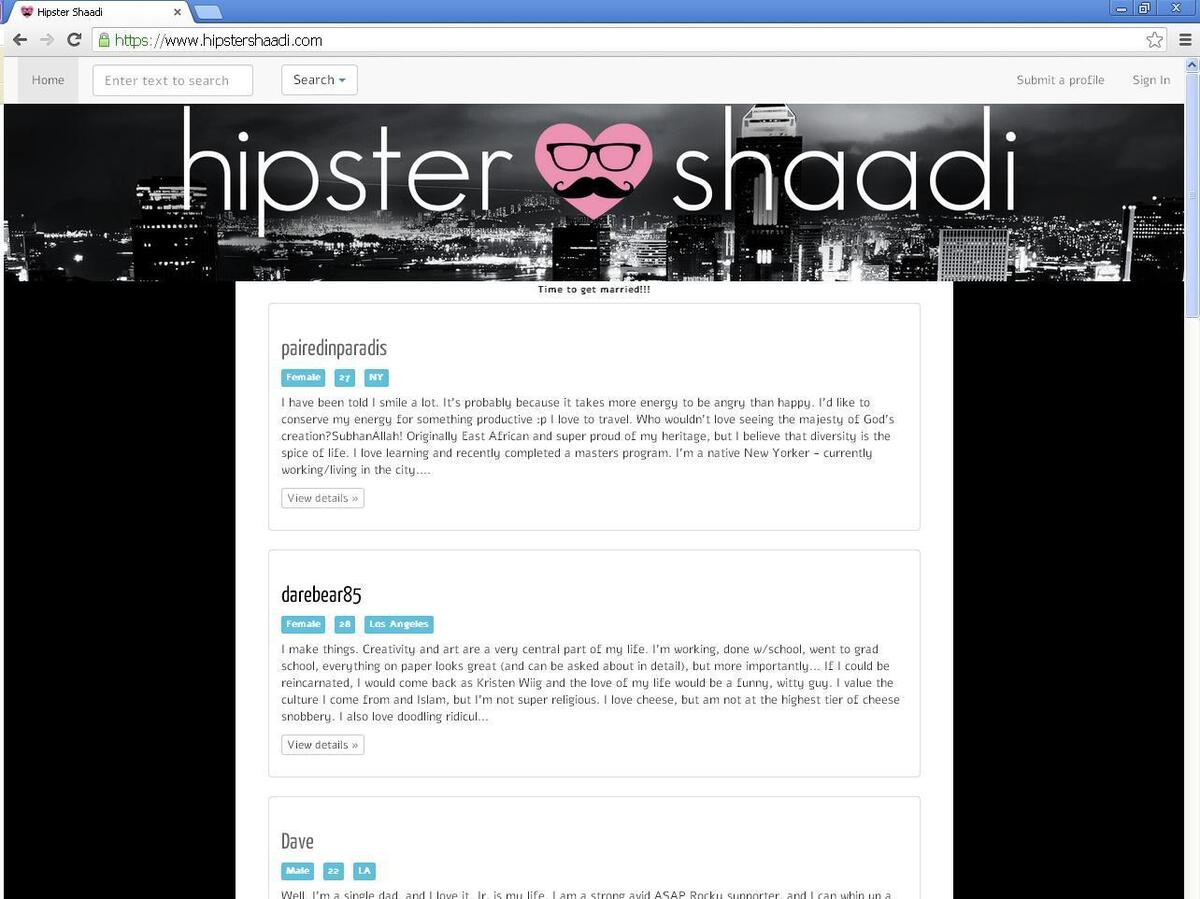 Since moving to Canada four years ago, Annie Idris has tried her fair share of Muslim matrimonial sites. Four or five, by her guess. "But I haven't been lucky," she says.

The 31-year-old, whose parents are from Pakistan and who grew up mostly in Saudi Arabia, says it's mostly cultural differences getting in the way — the men are sometimes too conservative for her taste, or they don't share her interests. She's talked to plenty of eligible bachelors, but none have been The One.

Around her home in Toronto, she says she doesn't often meet potential suitors who meet her "priority questions": Is he open-minded, thoughtful, honest? Does he hate Bollywood movies, like her? Most importantly, is he Muslim?

About a month ago, a friend sent Idris to HipsterShaadi.com. Only about a month old, the community there is still small. The primary target: young hipsters, with usernames like "okra_lover" and "Hungry_Hungry_Hijabi." They're artists and doctors and M.B.A students. They're from Arizona, New York City, California, Delaware, even Canada. They're all looking for love. And they're all Muslim.

Book-illustrating, motorcycle-riding Idris was hooked. "I looked through the profiles and found them very different than the ones you found at other matrimonial websites," she says. "They just happen to be Muslim, but they happen to be hipster in all other forms.

"I didn't know there were people out there who are Muslim and like this."

Idris is just the type of "third-culture kid" Hipster Shaadi's founders had in mind when they made the site: young adults, often the children of immigrants or living in a country they weren't born in, balancing old traditions in a new setting. They have to navigate that space between their cultures, even if they sometimes don't reconcile.

Shereen Nourollahi, a 26-year-old Iranian-American from San Diego, knows first-hand the challenges of growing up in multiple cultures — particularly when they have such different views on relationships. "Parents and grandparents, the older generations see it coming from where they came from," she says, while often "kids see it from an American standpoint."

Nourollahi's seen plenty of friends enter what she calls "parent-arranged marriages." In their circles, mingling between unrelated men and women is frowned upon, and "there's not really that many options for youth" beyond leaving their romantic fate to their parents. It's not a bad option — Idris says she's open to the idea — but for many, it's not a terribly enticing one, either.

Nourollahi and Humaira Mubeen, a 24-year-old in D.C., were struck by the idea of Hipster Shaadi while discussing dating in an online forum for Muslim hipsters called, appropriately, "Mipsterz."

After seeing so many of the same issues come up over and over again — how difficult it is to meet other young Muslims, expectations to get married early — Nourollahi and Mubeen decided to create a casual way for their fellow hipsters to build relationships without going against their values.

"We thought, 'Let's make a website and see what people our age want,'" Nourollahi says.

With the help of their friend Hassan Shakely, the two launched HipsterShaadi.com — not to be confused with the Indian matrimonial site Shaadi.com — in late October. In the vast pool of online matchmaking (should you be on the hunt), lovelorn Muslims have no shortage of options for finding their matrimonial match: Meet Me Halal, Muslim Mingle and Salaam Love are just a few sites promising users a spiritually suited soul mate.

But Hipster Shaadi's founders are confident they're offering something different. Religion may be the common thread among the site's users, but it doesn't end there. Wardah Khalid, author of the "Young American Muslim" blog for the Houston Chronicle, says Muslims of her generation "connect on so many more things."

Though membership has been slow to take off (roughly 125 hipsters have posted profiles so far), reactions to the lighthearted approach to Muslim dating were instantaneous. The response has "really shown us that there's way more of a need for it than we ever thought," Nourollahi says.

Not your parent's arranged marriage

As Marcia Hermansen, director of the Islamic World Studies Program at Loyola University Chicago, points out, "Dating for a lot of folks [in Islam] is kind of a taboo still. It doesn't mean 'dating' the way most Americans [understand it]."

Most Hipster Shaadi users are between the ages of 19-25, and haven't experienced dating in the same way their non-Muslim peers have, casually and without chaperones. Abbas Rattani, the creator of Mipsterz, says that while the premise of Hipster Shaadi doesn't speak to everyone, for users uncomfortable with casual courtship, the site is a "nascent approach at dating and trying to wrestle" with their ties to Western culture and Muslim traditions. It's an introduction into the world of romance (which, even without religious considerations, isn't a cakewalk), offering options that, at the very least, hit the 'must be Muslim' requirement.

Not everyone is on board with the site's attempt to balance the hip with the halal. One critic likened the site to a "small community cesspool," writing, "This is a site that you cannot possibly take seriously, right?" Another compared it unfavorably to the matchmaking "rishta aunties" of South Asia.

If Hipster Shaadi resembles a modern-day matchmaking service, that may be exactly the point, says Omid Safi, professor of Islamic studies at the University of North Carolina at Chapel Hill. "In some ways I see these groups — as new, funky, cool as they are — they are doing a lot of what in another context the aunty generations would have been doing," he says.

You thought your local rishta aunty was unbearable? Run for your lives, the hipsters are here --> http://t.co/OXUEYXRtzL

By choosing to join the particular community of Hipster Shaadi, young Muslims have ownership of their lives without doing away with the "broader culture of support," Safi says. They may not be relying on aunties to set them up, but they are involving others in their search for a potential husband or wife.

When asked if she would call herself a matchmaker, co-founder Mubeen does say that she and Nourollahi are like the "Jane Austens of the 21st century ... We're the third person that's mediating all this."

The site's main beneficiaries stand to be Muslim women, who are often greatly discouraged from marrying outside of the religion, while men are allowed to marry women of other faiths. Safi says that this has created a "surplus of educated, accomplished, professional Muslim" women and a dearth of suitable husbands. Women who sign up for Hipster Shaadi can find men who are actively looking to marry another Muslim.

The young adults on the site aren't seeking casual romances; the site's tagline on Facebook is "Marry a hipster already!" Users can state on their profiles that they are just "Testing the waters" or "Trying to get married yo." (The name isn't exactly subtle, either: Shaadi is the Urdu word for marriage.) It may be tongue-in-cheek, but at its twee, twitterpated heart, Hipster Shaadi is a place for users to start looking for love.

And that's what Idris hopes to find — ideally with a nice Muslim man, maybe one on Hipster Shaadi. Islam is something she wants to share with her future (hopefully hipster) husband, but it's not the only thing. She already has her eye on another user on the site — and she hopes he likes motorcycles.