Accessibility links
Shifting Gears To Make Bike-Sharing More Accessible : Code Switch In the past few years, bike-sharing systems have popped up from Boston to Minnesota to Washington, D.C. The users so far tend to be young, male and wealthier than the rest of the population. 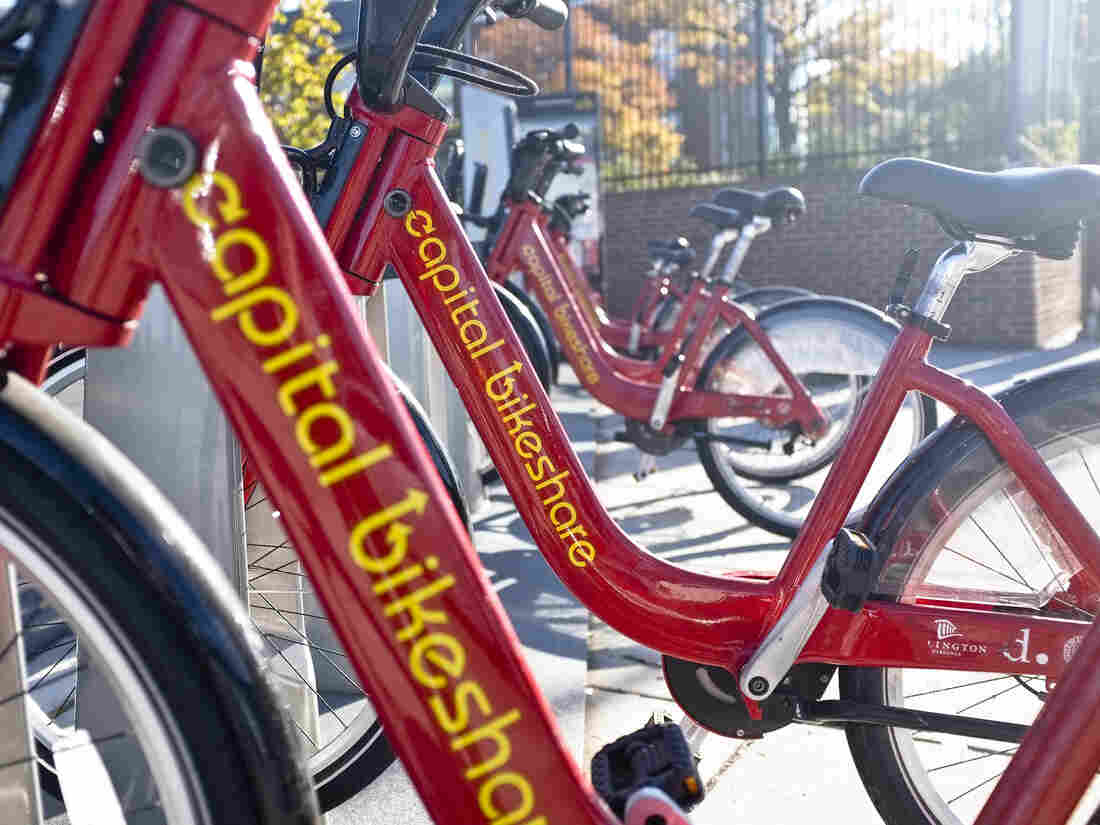 Bike-sharing is increasingly popular. But those who need it most often have the least access to it. Meredith Rizzo/NPR hide caption 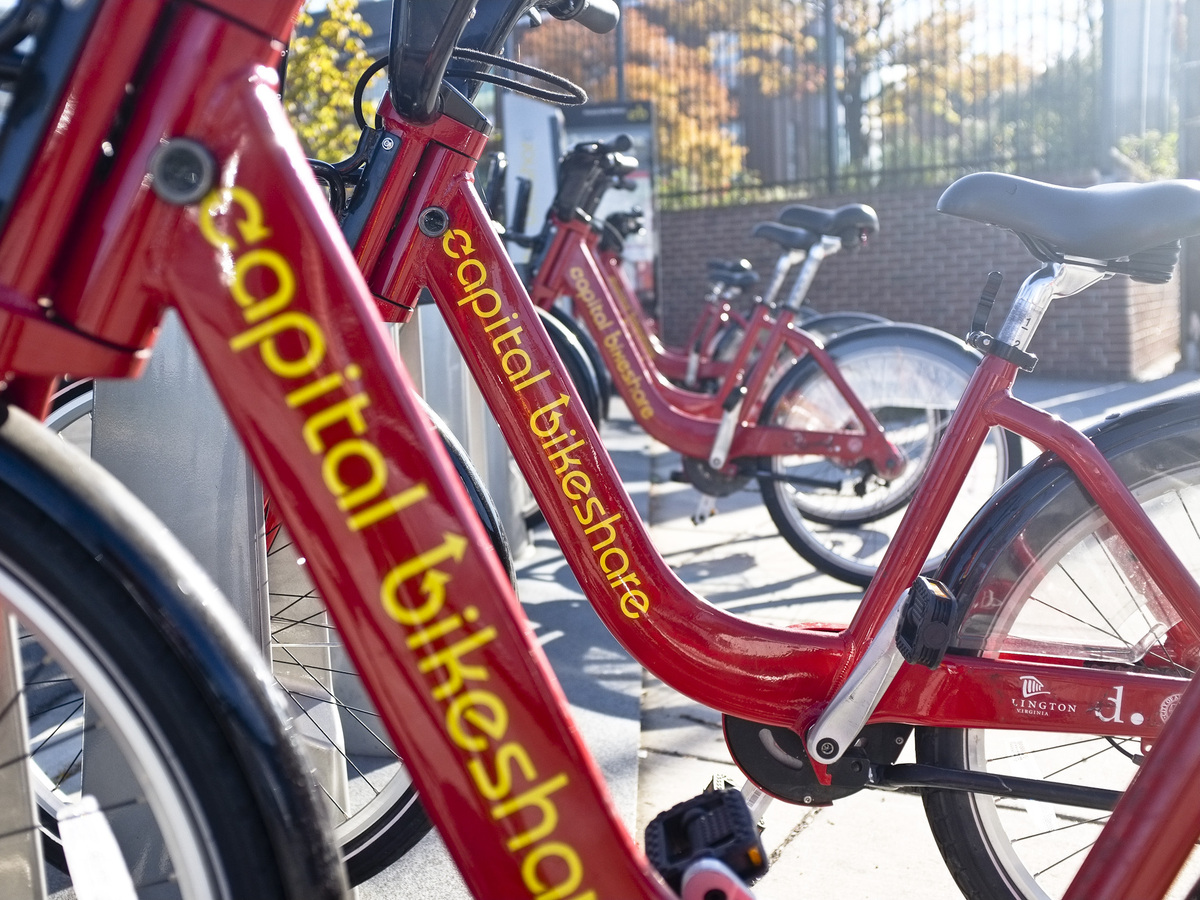 Bike-sharing is increasingly popular. But those who need it most often have the least access to it.

This story is part of a project on commuting in America.

Millions of commuters across the country have a new way to get around. In the past few years, bike-sharing systems have popped up from Boston to Minnesota to Washington, D.C. They're supposed to make commuting easier, greener and cheaper. But the people who arguably need these bikes the most are often the least likely to access them.

These bike-sharing systems have a lot of different names: Divvy, Hubway, Nice Ride. But they all work roughly the same way: You pick up a bike at one docking station, ride it and then lock it up at another station. And these systems have something else in common: The users so far tend to be young, male and wealthier than the rest of the population.

"The rates of low-income ridership in all bike-share programs around the world is pitifully low. So we can only do better."

"The rates of low-income ridership of all bike-share programs around the world is pitifully low. So we can only do better," says Caroline Samponaro, of Transportation Alternatives in New York. The Citi Bike system launched in New York earlier this year.

Samponaro and I met up at a docking station near a big public housing project in Brooklyn. It's right across the street from a busy bike lane, and about two blocks from the foot of the Manhattan Bridge — in other words, a prime spot for bike commuting. But the docking station just sits there, full of bikes, waiting for riders. Samponaro says this unfortunately fits with the data so far.

"The demographic information I've seen to date is that it's more men than women, and only 0.5 percent are low-income New Yorkers," says Samponaro, who considers that a pretty poor rating.

It's not fair to single out New York here. Boston, Denver and Minneapolis-St. Paul — every bike-sharing system that's launched so far has had trouble attracting large numbers of low-income and minority riders.

That may have something do with where the docking stations are located. But the people who run these systems say they're businesses, and they have to start where the demand for cycling is greatest.

"Systems are forced to go for the low-hanging fruit — the neighborhoods that have the highest density of commercial, of residential, and that are going to provide the most ridership to help pay for the service, and then hopefully catch up with the outlying neighborhoods as quickly as they can," says Paul DeMaio, a consultant who worked with Capital Bikeshare in Washington, D.C.

But it's more than just location. Even when these stations are sited in low-income neighborhoods, they often go underused. Partly, this may be about price. A typical bike-sharing membership costs somewhere between $60 and $100 a year. Many of these systems offer discounts for low-income riders, but they're not always well-known or advertised.

"I don't understand why they would put those bikes there. 'Cause a lot of people [are] not gonna ride those bikes," Lavora Peoples says. Peoples lives in a lower-income section of Washington, D.C., called Anacostia. There are several bike-sharing stations here, but resident Diego Belton says not a lot people are using them. In part, Belton says, that's because a lot of residents don't have some of the basic things you need in order to rent the bikes. 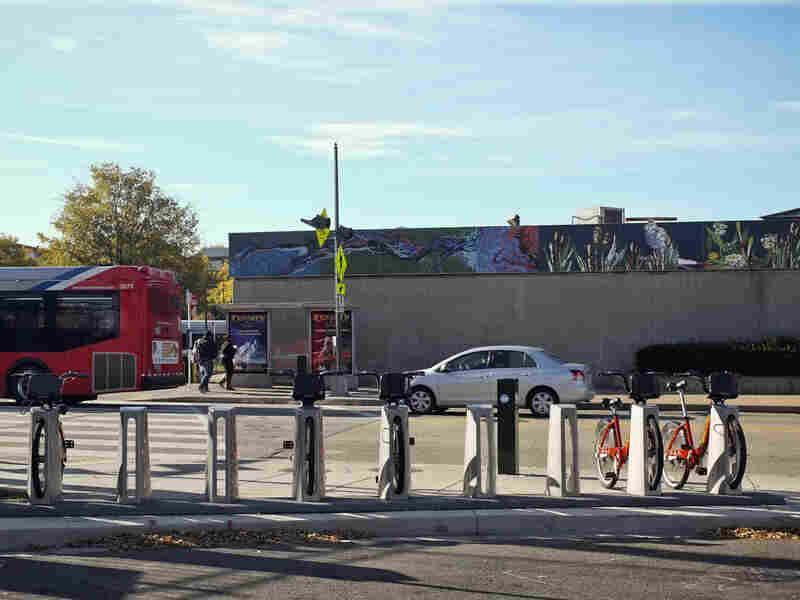 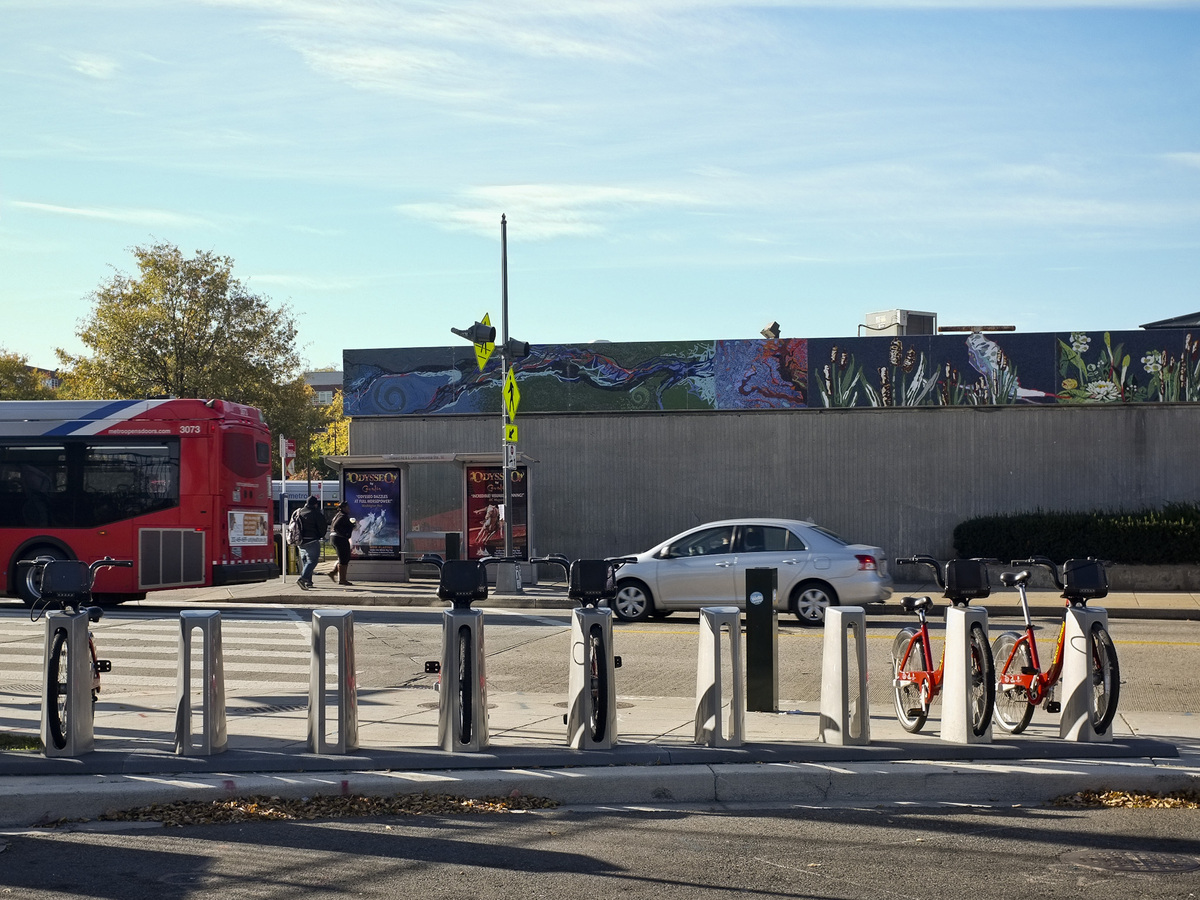 The Capital Bikeshare outside the Anacostia Metro Station in Washington, D.C.

"Downtown D.C., that's more where the people have, like, credit cards. You know, you need a credit card or some type of payment plan like that to even use these bikes," Belton says. "Young people around here like in Southeast, they don't got no credit cards."

People without credit or debit cards are known in wonk-speak as the unbanked, and they've been a big challenge for bike-sharing systems across the country, according to Michael Carney, who studied these systems as a grad student at the University of Illinois, Chicago.

"I get the sense that the unbanked issue hasn't been a top priority for most of the bike-share programs," Carney says. "Most of them are very new and they're just trying to get off the ground, really. All the ones that I have talked to have been conducting some sort of public outreach to lower-income communities, though."

New York City's Department of Transportation has held more than two dozen public meetings aimed at introducing Citi Bike to low-income New Yorkers, and it's given away more than 100,000 free helmets. DOT planning director Jon Orcutt says the city is thinking about ways to serve the unbanked better.

"It's a young, evolving industry, and coming down the road, maybe there's a way to pay by cellphone and link it to a cellphone account rather than a credit card account," Orcutt says.

But first, he says, they're struggling just to keep up with huge demand for bike-sharing in much of Brooklyn and Manhattan.

Still, Samponaro at Transportation Alternatives urges the city not to put off planning for low-income riders.

"The thing that I hear most from New Yorkers that are trying biking for the first time through bike-share is that, 'Wow, this had made my commute so much easier. This has added some joy, some fitness to my day that I didn't usually get.' "