Accessibility links
Zoinks! Tracing The History Of 'Zombie' From Haiti To The CDC : Code Switch Zombies populate our books, graphic novels, movies and video games with race and slavery playing an unexpected role. Our national obsession with zombies dates back centuries and can be traced to Haiti. Code Switch examines how the word "zombie" was born and how it has taken a life of its own. 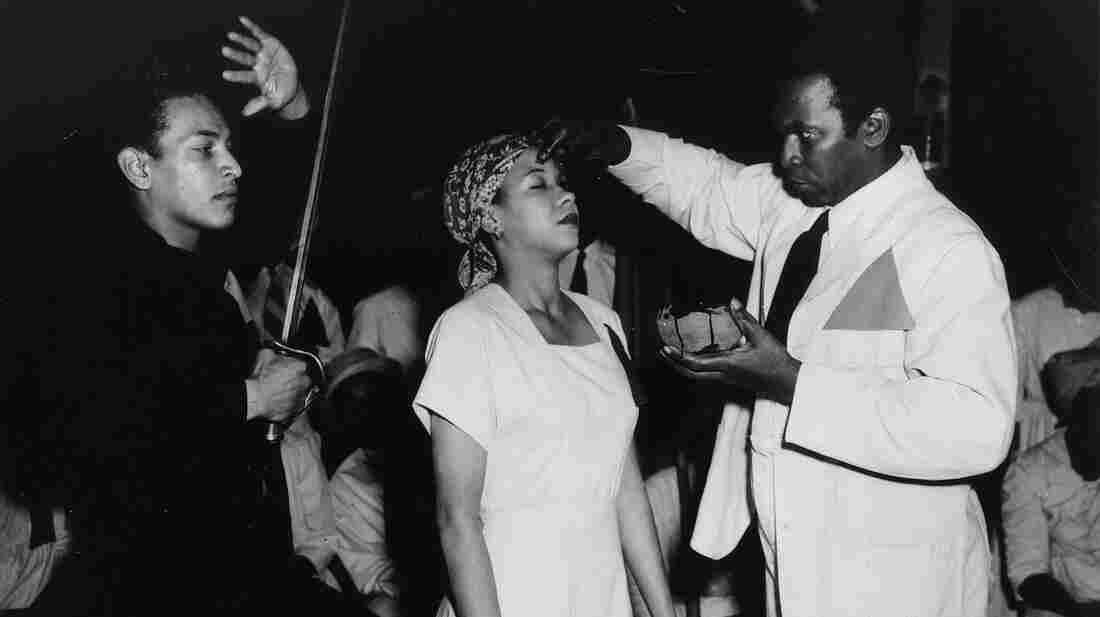 A still from the 1943 film I Walked With A Zombie. RKO/The Kobal Collection hide caption 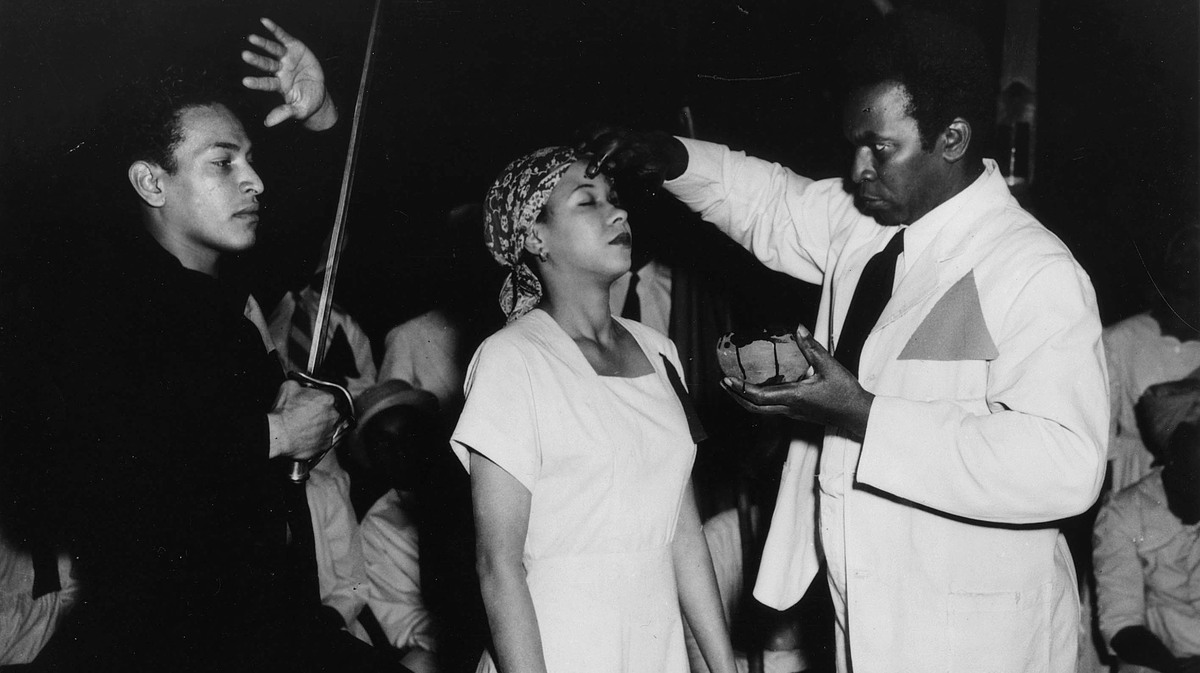 A still from the 1943 film I Walked With A Zombie.

That was the subject line of an email blast that landed in my inbox recently from a major online retailer as it announced it was "bringing their Black Friday deals back to life."

With shows like The Walking Dead and movies like World War Z, plus a whole literary subgenre known simply as "zombie lit," the supernatural beings have been having a pop culture moment for some time now.

While there's a long history and fascination with animated corpses in American literature and cinema, zombies aren't originally a product of the American imagination. The undead corpses actually trace their roots to Haiti and Haitian Creole traditions that have their roots in African religious customs.

According to Haitian folklore, the book Race, Oppression and the Zombie recounts, zombies are the product of spells by a voudou sorcerer called a bokor. The word is believed to be of West African origin and was brought to Haiti by slaves from that region. The concept of zombies would evolve further with the creation of the voudou religion.

In an essay for The New York Times last year, University of California, Irvine, professor Amy Wilentz called zombies a "very logical offspring of New World slavery." According to Wilentz, because slavery in colonial Haiti was so viciously brutal, death was the only real escape and seen as a way to return to Africa or lan Guinée (which translated means Guinea). As she writes:

"Suicide was the slave's only way to take control over his or her own body ... And yet, the fear of becoming a zombie might stop them from doing so ... This final rest — in green, leafy, heavenly Africa, with no sugarcane to cut and no master to appease or serve — is unavailable to the zombie. To become a zombie was the slave's worst nightmare: to be dead and still a slave, an eternal field hand."

The earliest references to zombies in the United States were closely associated with slavery and connected the word to African traditions. The word "zombi" — which for years was spelled without the "e" at the end — first appeared in print in an American newspaper in a reprinted short story called "The Unknown Painter" in 1838.

In the story, which was first published in the Chambers's Edinburgh Journal and then in the U.S. in the Alton Telegraph newspaper, a young African slave owned by a Spanish painter named Bartolome Esteban Murillo claims that a "zombi" appears in the art studio at night to work on the paintings of Murillo's apprentices. However, no one believes the young slave's assertions and dismiss the existence of the zombi as an African myth. (Murillo's famous painting "Adoration of the Magi" features a black man as one of the three wise men. You can read more about people of color in medieval art here.)

In an essay about the evolution of the zombie in American pop culture, Ann Kordas notes that the fictional story of Murillo's young slave seemed to have struck a chord with the American public and different versions of the story were published many times in local newspapers throughout the 1800s. Kordas notes that by the mid-1800s, a zombi had for many "come to be associated with a creature of African 'origin' that willingly performed services for whites."

By 1872, the linguistic scholar Maximilian Schele de Vere would define a zombi as "a phantom or a ghost, not infrequently heard in the Southern States in nurseries and among the servants."

But the mainstreaming of the word would begin in 1929, when the travel writer William Seabrook released his book on Haiti and "voodoo," titled The Magic Island, in which Seabrook writes about seeing "voodoo" cults in Haiti and the concept of the zombi to many readers. Several film scholars believe the book was the basis of the classic 1932 horror film White Zombie.

The film White Zombie was — as the title suggests — about white, rather than African, zombies. In the film, a young couple named Madeleine and Neil are talked into getting married on a Haitian plantation by the owner, who is secretly plotting to seduce the bride. To that end, he teams up with a local Creole mill owner (played by Bela Lugosi) who gives him a zombie potion to use on Madeline.

Other zombie films would follow, but they'd rarely take place in Haiti or incorporate the words origins the way White Zombie did. An example is the 1943 horror movie, I Walked With A Zombie, in which a Canadian nurse travels to the fictional Caribbean Island of St. Sebastian to care for the wife of a plantation owner. On arrival, she finds her charge in a zombie-like state and wonders if voudou would cure her.

1968's Night of the Living Dead is widely considered a landmark film in the genre. Marking the 45th anniversary of the release of the film, Code Switch's Matt Thompson wrote that the film, "set the expectation that [zombie movies] would be a vehicle for stinging social commentary." And that it did so because director George Romero cast a black actor, Duane Jones, as the protagonist. Audiences, at the time, were said to draw a connection between the action on the screen and the fight for civil rights.

Through the years, researchers and anthropologists have occasionally tried to research the Haitian voudou belief in zombies. In 1937, the author Zora Neale Hurston traveled to Haiti to research Haitian customs for her book Tell My Horse.

In a 1943 interview, Hurston was asked to define exactly what a zombie was. Her reply:

"A zombie is supposed to be the living dead: people who die and are resurrected, but without their souls. They can take orders, and they're supposed to never be tired, and to do what the master says."

One of the most famous studies of Haitian zombies was ethnobotanist Wade Davis' 1985 book The Serpent and the Rainbow: A Harvard Scientist's Astonishing Journey into the Secret Societies of Haitian Voodoo, Zombies, and Magic. The highly controversial book sought to discover how zombies were created. Wade studied the case of Clairvius Narcisse a man believed to have been turned into an actual zombie through a combination of drugs (including puffer fish venom and toad venom) in order to mimic death and then given the hallucinogenic drug tetrodotoxin to keep him in a zombie-like state.

Davis' research created a huge stir upon publication, with other researchers claiming his methodology was unscientific and that they couldn't find evidence of the hallucinogens upon testing his samples.

The Centers for Disease Control and Prevention is among the organizations that have sought to capitalize on the American appetite for all things zombie. In 2012, the CDC raised some eyebrows when it unveiled a page on its website devoted to "zombie preparedness."

On the page, the CDC's director of the Office of Public Health Preparedness and Response, Dr. Ali Khan, notes, "If you are generally well equipped to deal with a zombie apocalypse you will be prepared for a hurricane, pandemic, earthquake, or terrorist attack."

The site was so popular that it crashed when it was launched.