Accessibility links
Many Young Undocumented Immigrants Have Yet To Seek 'Deferred Action' : Code Switch Half a million. That's the estimated number of illegal immigrant youths who likely qualify but have yet to apply for Deferred Action for Childhood Arrival, or DACA, which allows young people brought to the U.S. illegally as children to avoid deportation and to get a work permit for two years. 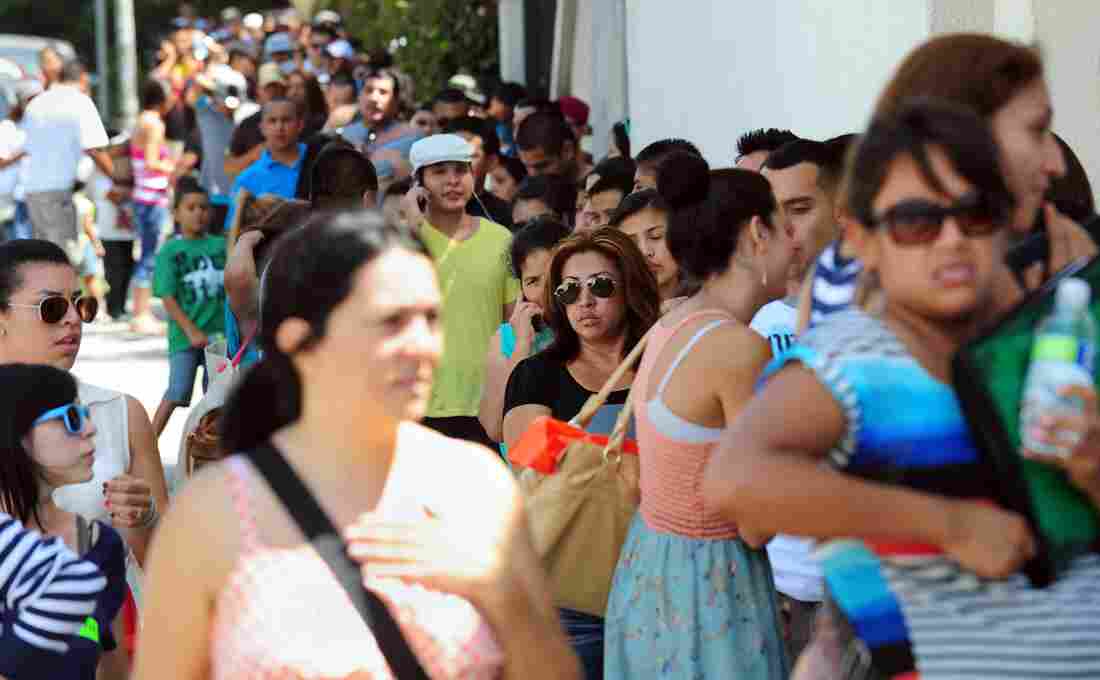 A crowd forms a line around the block from the office of The Coalition for Humane Immigrant Rights of Los Angeles on the first day of the Deferred Action for Childhood Arrivals, or DACA, program. Frederic J. Brown/AFP/Getty Images hide caption 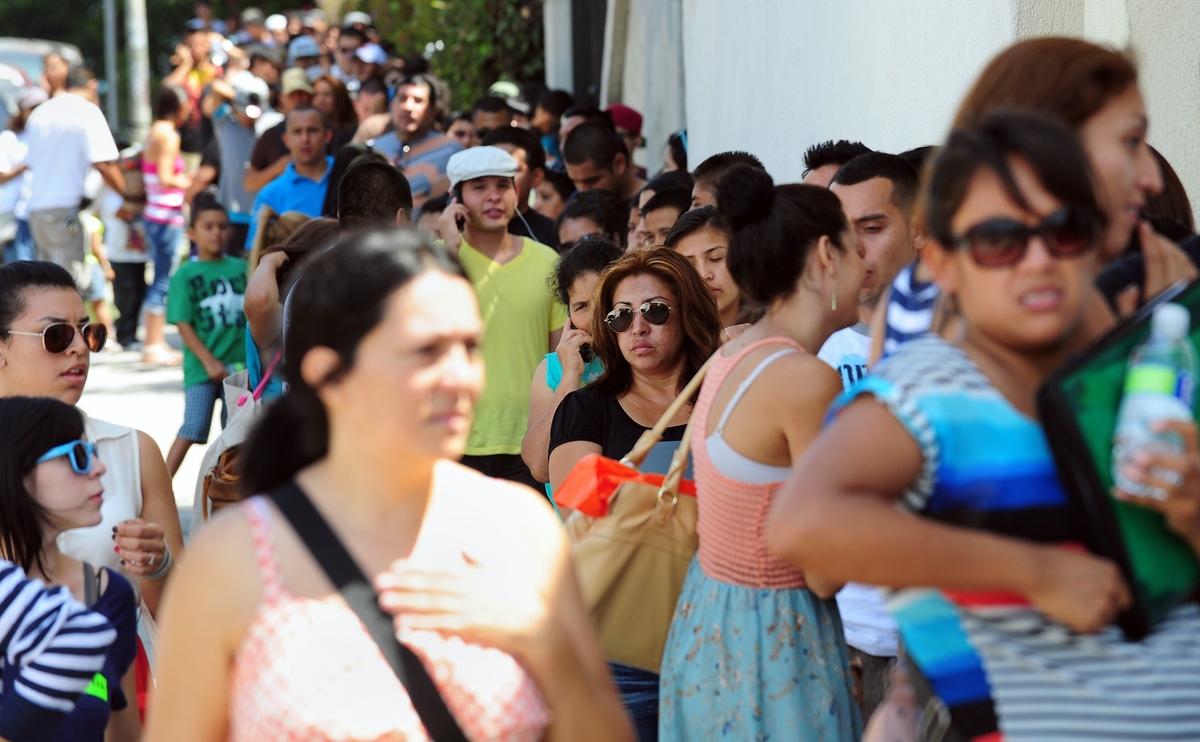 A crowd forms a line around the block from the office of The Coalition for Humane Immigrant Rights of Los Angeles on the first day of the Deferred Action for Childhood Arrivals, or DACA, program.

Today's figure: Half a million. That's how many people there are who likely qualify but have yet to apply for the Obama administration's program known as DACA — Deferred Action for Childhood Arrivals. DACA allows young people brought to the U.S. illegally as children to avoid deportation and to get a work permit for two years.

The DACA program was announced in 2012. For months after, undocumented young people — most of whom were Latino — applied by the hundreds of thousands. It wasn't the DREAM Act they were pushing Congress for, but it was a temporary substitute. That flood has now slowed to a trickle. Eligible young people are no longer coming forward in large numbers on their own

"They're out there. We just wish we had more resources to go out and do DACA-specific outreach," says Amanda Chavez Doupe, who often meets with legal residents who want to become citizens. The community outreach worker for Catholic Charities in Los Angeles always tells groups about deferred action, too.

Adam Luna of Own the Dream says the biggest challenge is identifying potential applicants and overcoming misinformation about eligibility.

"People who didn't go to college think that they don't qualify. People who are young, and young parents of 14- [and] 15-year-olds don't realize that people that young can apply," Luna says.

The Washington-based Migration Policy Institute estimates a total of 1.1 million people are eligible for DACA. Of those, the largest group, by far, were born in Mexico. They, along with other Latin Americans, also make up the largest percentage of people who have already applied.

Other groups have not been as organized, especially people brought illegally as children from many Asian countries. Only 16 percent of eligible Filipinos and just 9 percent of Chinese who don't have authorization to be in the U.S. have applied for DACA. Tiffany Panlilio, who works with the organization Asian Americans Advancing Justice, says part of the problem is cultural — organizers have to overcome a social stigma among Filipinos over admitting that they're undocumented.

After Drop, Number Of Immigrants Illegally In U.S. Levels Off

"It's kind of just seen as a big shame to your family or to your friends," Panlilio says. "It's very similar in the Korean community; definitely the Chinese community."

To overcome the stigma, Panlilio's organization has a hotline with Korean, Vietnamese, Thai, Cantonese and Mandarin speakers.

And the organization recently posted YouTube videos that DACA applicants can watch in private.

"[They] answer some basic questions, like, 'What is DACA? Will Homeland Security take action on my case? What documents do I need?' All those things," Panlilio says.

A lot of many would-be applicants believe they need a lawyer to apply for deferred action, but they don't — though they do need a $465 government application fee. Luna of Own the Dream says that's been an obstacle: "$465 per individual in a family that perhaps has more than one child is a lot of money."

And then there's fear. Young undocumented immigrants are getting mixed messages. One department inside the Department of Homeland Security — the Citizen and Immigration Services — is telling folks to come forward, avoid deportation and get a work permit. Another department — U.S. Immigration and Customs Enforcement — continues to deport illegal immigrations who may be friends, family, and in some cases, potential applicants themselves.

Luna says DACA applicants should come forward without worrying. "Information from one is not going to be shared with [another] — addresses and so on and so forth," Luna says.

There's one last reason more young people aren't applying for deferred action. Like all undocumented immigrants, they are waiting for Congress to pass a comprehensive immigration overhaul — that would provide a permanent solution.