Accessibility links
Chinese-American Descendants Uncover Forged Family Histories : Code Switch The Chinese Exclusion Act, designed to prevent Chinese laborers from entering the country, prompted tens of thousands of people to use forged papers to enter the U.S. The law was repealed 70 years ago, but many Chinese-Americans are still piecing together their ancestors' true identities. 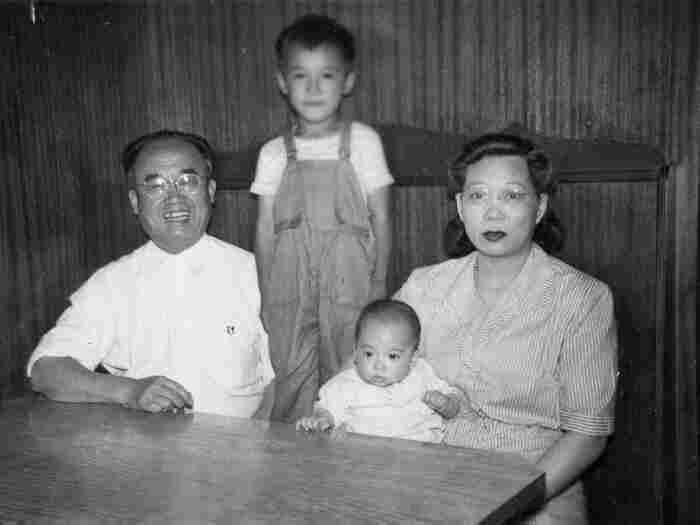 William Wong (standing) poses with his parents and nephew in an old family photo. Wong's mother immigrated to the U.S. from China as his father's "sister" to bypass the Chinese Exclusion Act of 1882. Courtesy of William Wong hide caption 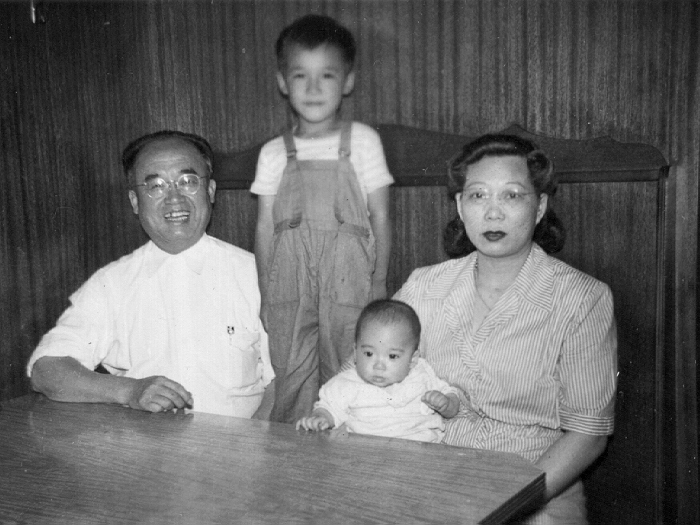 William Wong (standing) poses with his parents and nephew in an old family photo. Wong's mother immigrated to the U.S. from China as his father's "sister" to bypass the Chinese Exclusion Act of 1882.

What if you discovered the last name you've lived with since birth is fake?

That's what happened in many Chinese-American families who first came to the U.S. before World War II, when the Chinese Exclusion Act of 1882 banned Chinese laborers from legally entering the country.

The law, formally repealed by Congress 70 years ago Tuesday, prompted tens of thousands of Chinese to use forged papers to enter the U.S. illegally.

Today, their descendants are still trying to uncover the truth.

William Wong says that even as a child, he knew Wong was his last name on paper only; his real family name is Gee.

"We knew when we were growing up in Oakland's Chinatown that we were a Gee family," says Wong, 72, a retired journalist in Piedmont, Calif.

Byron Yee, whose father entered the U.S. illegally as a "paper son"

Wong's family was one of thousands made up of "paper sons and daughters," Chinese immigrants who were the "children" of Chinese-American citizens only on paper — fraudulent documents with false names. Blood relatives of American-born Chinese, as well as Chinese merchants, teachers and students, were among the exceptions to the immigration restrictions, which targeted Chinese laborers.

After arriving in America in 1937, Felicia Lowe's mother lived under the assumed name of Kam Sau Quon, impersonating an American-born Chinese girl who, unbeknownst to immigration officials, was already dead.

Lowe's father lied, too. He was a paper son who legally reclaimed his real family name, Lowe, when Felicia was 6.

"It was absolutely confusing! My father explained [changing our family name] was for business reasons, but how could any 6-year-old know what that means?" says Lowe, now 68 and a documentary filmmaker in San Francisco.

After piecing together documents from his father's old immigration file at the National Archives, he discovered that his father arrived as a teenager in Boston, where he claimed his eldest brother as his "paper father."

Yee admits that his father probably would not want him to know his true immigration story.

"Some of [the information in old immigration files] were based on truth, and some of these were lies," he says. "And I think that's part of why the Chinese never really talked about it, because they don't want to talk about the lies."

'A Total Change Of Heart'

For many Chinese immigrants, those lies were the key to opening America's golden door, held shut for more than half a century by the Chinese Exclusion Act. It was the country's first, and so far only, federal law to shut out an immigrant group based on nationality.

The anti-Chinese immigration law came at a time when low-wage Chinese workers were seen as unfair competition and unwanted neighbors.

The law's repeal in 1943 was largely a goodwill gesture in the midst of U.S.-China solidarity during World War II. While it allowed Chinese nationals in the U.S. to become American citizens, only 105 Chinese immigrants were allowed to enter the U.S. annually — tight restrictions that were finally lifted more than two decades later.

"A total change of heart [on the Chinese Exclusion Act] doesn't come until 1965, when Chinese immigration is put on an equal par with other nations in the world," Yung explains.

Decades after the Chinese Exclusion Act has settled into history books, many of the descendants of paper sons and daughters are still trying to learn the truth.

"I know for me it's become extraordinarily meaningful just so that I can set the record straight within my own family," says Lowe, who's been working on a documentary about her mother's immigration story.

Wong thought he had the record straight — until he recently spotted conflicting names in old documents, which led to more questions. "Are we sure Pop was legal? Or was he truly a 'paper son'?" he asked his sisters.

The family story, and the story told to immigration officials, was that Wong's father was the real son of a Chinese-American citizen, and that his grandfather was born in San Francisco.

Now, even that is suspect.

Still, Wong says he's proud of being a "Gee" — so proud that seven years ago, he had the Chinese character tattooed in red on his left bicep.