Accessibility links
A Graduate Program Works To Diversify The Science World : Code Switch Women and African-Americans are underrepresented among science and engineering graduate students. The Bridge Program, a collaboration between Fisk and Vanderbilt Universities, is working on changing this. And other programs are learning from its approach.

A Graduate Program Works To Diversify The Science World

A Graduate Program Works To Diversify The Science World

There is a widespread narrative in higher education that goes something like this: Colleges and universities have always accepted the best and brightest students; then, due to pressure from outside forces (some of them named "John F. Kennedy"), diversity was thrust upon the academy. In turn, schools meted out race-based scholarships, relaxed standards for certain students in order to fulfill quotas and — poof! — diversity. A constant and often unsubtle subtext of this narrative is that good old objective academic rigor has sometimes suffered in the name of manufactured, if well-meaning, multiculturalism.

A graduate science program in Nashville is helping write a powerful counternarrative — and it has some pretty impressive numbers to back it up — even if there isn't wide consensus yet on the reasons why they've done so well. 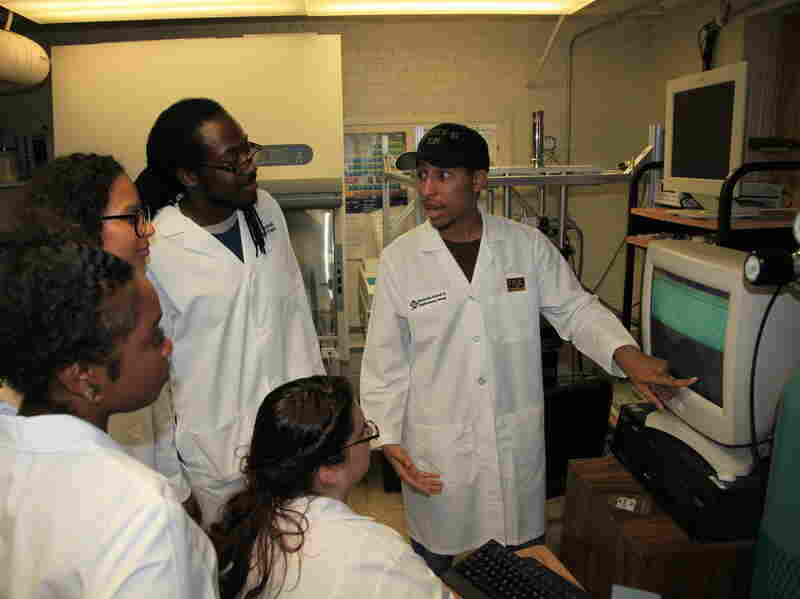 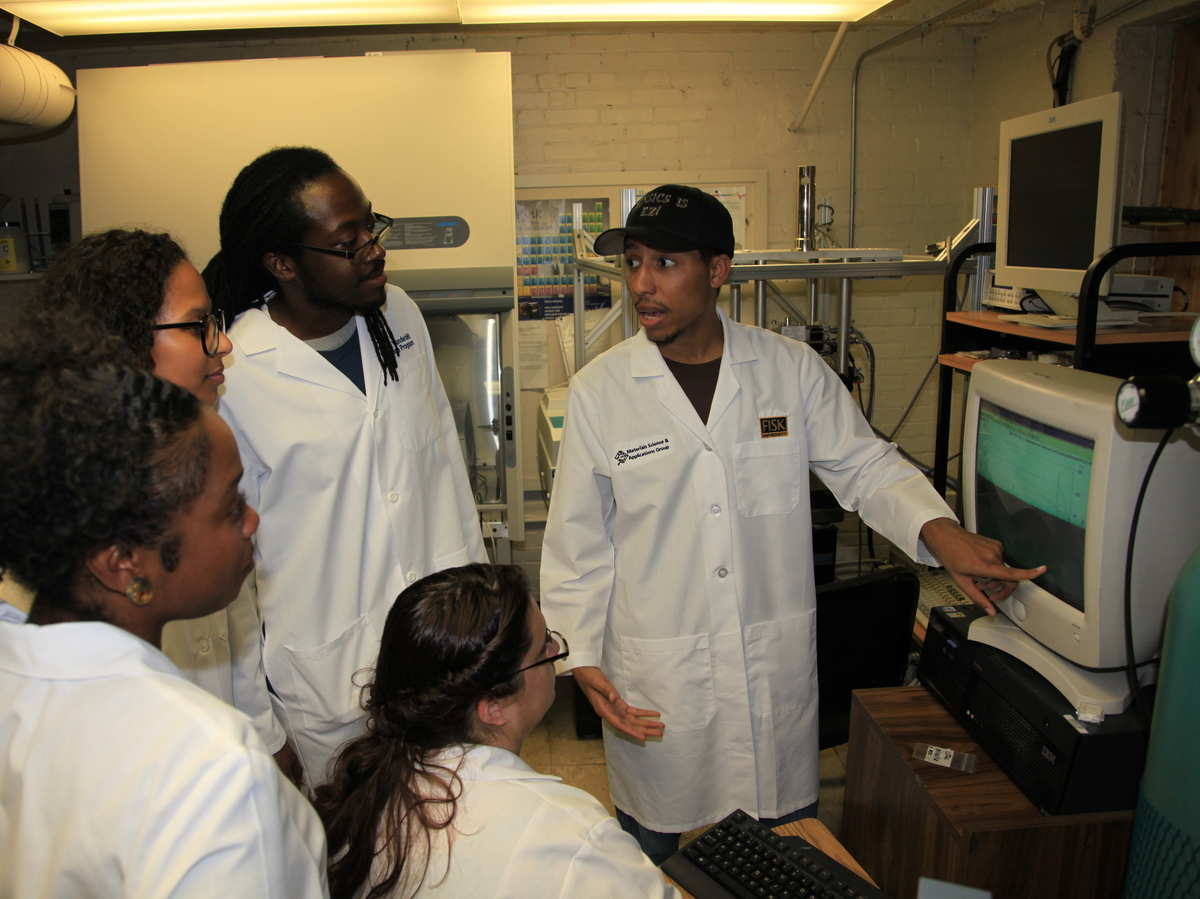 "For too long we've thought about diversity as this problem sort of after the fact," says Keivan Stassun, an astronomy professor at Vanderbilt University. Stassun helped found the Bridge Program — a partnership between Vanderbilt and nearby Fisk, a historically black university — which was created in 2004 with the goal of increasing the numbers of women and underrepresented minority students earning Ph.D.s in science. "In reality," Stassun says, "the diversity is there, and we've been seriously filtering it out. And we've been filtering it out on the basis of things that are not actually predictive of who's going to succeed and who's going to fail." Those things are, mostly, GRE scores and GPA.

"GRE scores are profoundly and strongly correlated with both gender and ethnicity," Stassun says, "such that white and Asian students score on average approximately 200 points higher than African-American students." And even among the best, he adds, "Ethnicity makes a huge difference, and there's almost a 100-point difference between men and women."

Schools aren't supposed to use hard cutoffs, but Stassun and a colleague analyzed some of the country's top science and engineering undergrads (minimum A-minus average), and when they filtered out all those scoring below 700 on the GRE they were left with about 20 percent women and 5 percent blacks — almost a perfect mirror of actual enrollments. ("You can basically entirely explain the makeup of our graduate programs based on GRE scores," Stassun says.)

Which wouldn't be a problem if the old narrative was true — that only the best and brightest get accepted. But Stassun points to a 2008 Council of Graduate Schools study, which found that Ph.D. programs in science graduate only about 50 percent of the students they admit. "If we were running a business," Stassun says, "you would declare the business model completely broken."

So Fisk-Vanderbilt looks beyond traditional metrics — not ignoring them, certainly, but focusing more intently on a constellation of traits that Stassun describes as "grit, performance character — basically measure a person's tenacity, a person's bearing toward achieving their goals." Since it began with a three-student cohort in 2004, the Fisk-Vanderbilt masters-to-Ph.D. Bridge Program has accepted 68 students, 55 of whom came from underrepresented minority backgrounds (namely African-American, Hispanic and Native American) and 46 percent of the students have been women.

But two other stats really jump out. First, a retention rate of 92 percent. And second, for those who have completed the Bridge Program through to the Ph.D., a job placement rate of 100 percent.

Not surprisingly, the Fisk-Vanderbilt ethos is catching on.

"It's a trailblazing program, it's been tremendously successful [and] it's taught all of us a lot," says Marcel Agüeros, assistant professor in the astronomy department at Columbia University.

Agüeros directs a similar bridge program at Columbia, which rather than offering a master's degree as a ramp toward Ph.D. work brings students into Columbia as research assistants for up to two years and places them in research groups in the natural sciences. "The ideal candidate for us is someone who has a decent academic record, or at least one that's trending in the right direction," Agüeros says, "but lacks the kind of research experience to really transition into a good graduate program." Underrepresented minority students sometimes lack access to or knowledge of these kinds of experiences. ("That's also true for students who go to smaller schools, or institutions where there just aren't that many resources available," he adds.)

Ted Hodapp, director of education and diversity for the American Physical Society, says his organization "learned a lot" from Fisk-Vanderbilt and Columbia in setting up its own bridge program. A year ago, APS got funding to set up programs at five schools, with The Ohio State University and University of South Florida already in place — joining M.I.T. and University of Michigan in the bridge program ranks — and the selection process is underway for the remaining sites.

Stassun says he finds the continued emulation of the Fisk-Vanderbilt program "incredibly flattering," but also very important. "As big as our program might grow," he says, "our real motivation is to move the needle nationally."

"For too long we've thought about diversity as this problem sort of after the fact. ... In reality, the diversity is there, and we've been seriously filtering it out."

And the needle is moving, however slowly.

Jedidah Isler was one of the first three students to be accepted into the Fisk-Vanderbilt Bridge Program. Nine years later, she is the first black woman in the history of Yale University — a place still struggling to diversify — to earn a Ph.D. in astronomy.

But she didn't always feel welcome at Yale, and her story demonstrates how far there still is to go. Isler says that during her first year, she and a group of about a dozen fellow graduate students went out to an all-you-can-eat sushi restaurant.

"So there are plates everywhere," she recalls. Everyone seemed full and content. "And all of a sudden, this kid in my class hands me a pile of his dirty plates" — the student is a white male — "he just kind of hands them to me and says, 'Here, now go and do what you're really here to do.'"

Isler, whose research on the energy emitted by particles that move out of supermassive black holes at velocities very near the speed of light was just published in Astrophysical Journal, remembers feeling devastated. "Not just because it happened," she says, "but because it kind of hamstrung me for what I could say. ... If I get really mad, then I'm the angry black woman. But if I give too much concession, then I'm sort of too conciliatory, and it was just weird. It let me know that this is not a safe space for me. ... It took me years to get past that."

Now a postdoctoral fellow at Syracuse University, Isler says she hopes to emulate Stassun, whom she says "still is my most involved mentor," despite her choosing Yale over Vanderbilt for her Ph.D. "Absolutely, it's of utmost importance to me that I do my part in breaking down barriers," she says. "If I don't, who will?"

But even as barriers come down, is diversity in science really that important? Science isn't racial or cultural, right?

"If you're barking up the tree of, 'Is physics different from a black, or Hispanic or Asian perspective?' I'd say no," Hodapp offers. Likewise, Stassun says, "I'm not convinced that minorities are going to ask different kinds of physics questions necessarily. But there is a rich research literature that demonstrates what corporate America actually has known for a long time, which is that diversity fuels innovation." Diverse teams are better at solving problems.

There is that practical dimension. There is the huge untapped domestic workforce that is, instead, replaced by foreign workers — a potential problem for various reasons but also, as Agüeros puts it, "a waste of human potential." And then there's also the larger issue of filtering out diversity in a way that is artificial and, in the end, detrimental.

"Unless you believe that talent in the sciences is somehow ethnically specific, or racially specific, which I don't think anybody does anymore, or gender-specific," Agüeros says, "then you have to recognize that [diversity] is an issue. ... Over the last 30 years, we've produced one African-American Ph.D. astronomer a year in the U.S. That's out of somewhere between 100 and 150 U.S.-born Ph.D. astronomers. ... And it's not just the small number that's amazing, it's the fact that the number hasn't changed in that entire time. So that suggests there's something systemic that's not quite right that we really need to figure out how to address."

Hodapp doesn't disagree, but he says the jury's still out on what exactly is behind Fisk-Vanderbilt's success in addressing the problem. "Fisk-Vanderbilt does show a pretty high retention rate, which I think is great, and I think we're hoping to do that as well," he says. "But it's not clear that it's from a different kind of selection process — which is one possibility — or if it's due to the attention that we'll pay to students." (He points to research that increased faculty involvement can improve outcomes even at the undergraduate level.)

Stassun, for his part, is confident that his program has found the formula. "We went in with the firm belief that the minority students who up until now have not been included in graduate education in the sciences ... that there was real talent and potential there," he says, "And in the process we discovered that that is just a better way to predict who's successful, period."

And Fisk-Vanderbilt continues to walk the walk, both in its diversity and the level of science it's producing. This past summer, current Bridge Program student Fabienne Bastien published an astronomy research article in Nature, becoming the first African-American woman ever to do so.

Steve Haruch is a writer and culture editor at the Nashville Scene. Follow him on Twitter at @steveharuch.