Accessibility links
The Truth Behind The Lies Of The Original 'Welfare Queen' : Code Switch The story of the woman famously referred to as a "welfare queen" in Ronald Reagan's 1976 campaign is far more bizarre and unsettling than the stereotype she became the emblem for, as a stellar long read from Slate reveals. 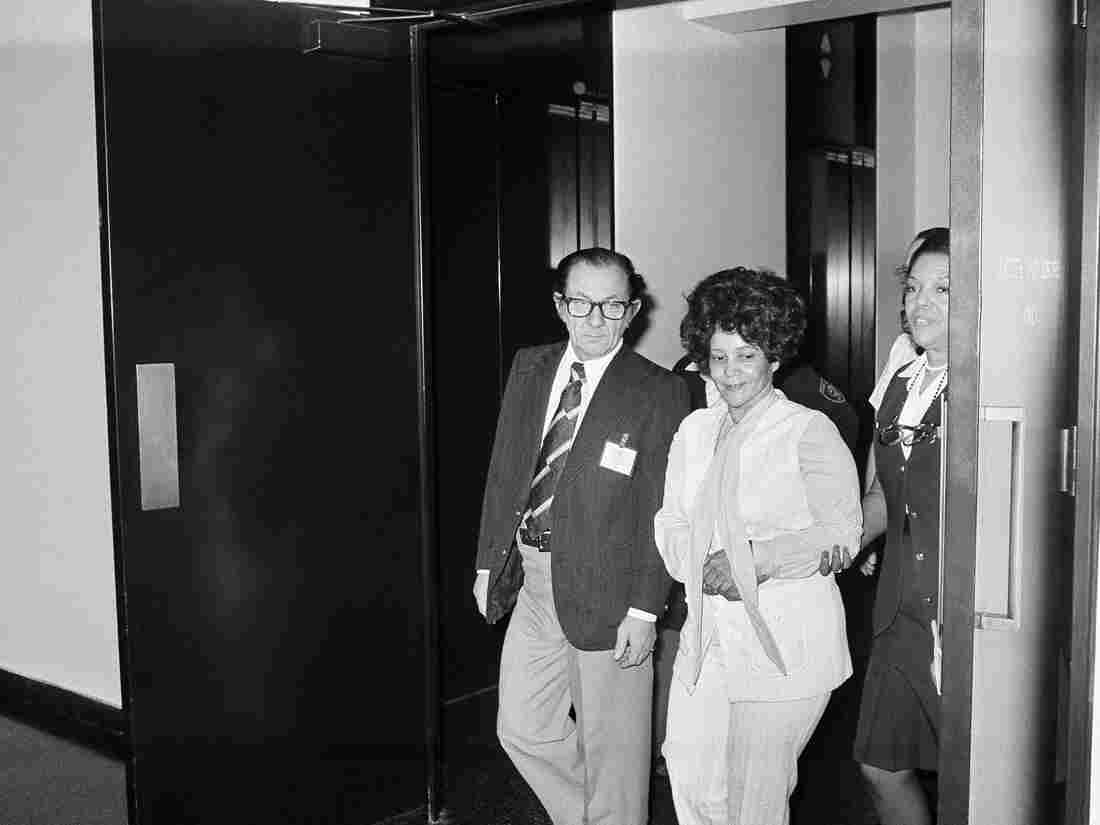 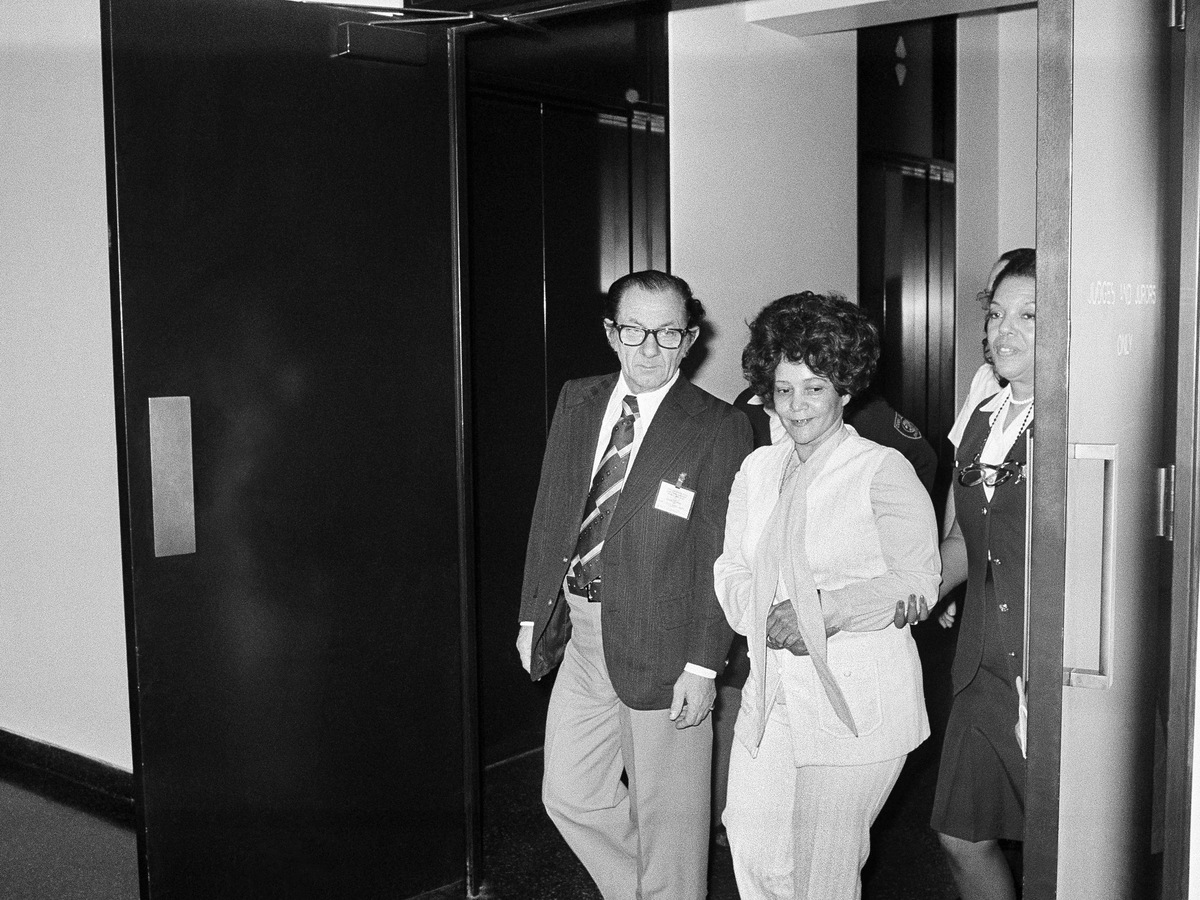 The Chicago press covered Linda Taylor's 1977 trial extensively, and she dressed to court the cameras.

If you haven't read Josh Levin's amazing story at Slate — the woman upon whom the term "welfare queen" was originally bestowed — you're missing out on a fascinating and disturbing profile of an unlikely political figure. Linda Taylor was never mentioned by name, but she was the subject of many of Ronald Reagan's 1976 presidential campaign speech anecdotes about a Chicago woman who'd defrauded the government of hundreds of thousands of dollars. And while Reagan's critics on the left argued that the woman was a fabrication, Levin reminds us at length that she wasn't.

If Taylor was a character in a movie, people would dismiss her as an implausibility. She really did bilk various government programs of hundreds of thousands of dollars. She also burned through husbands, sometimes more than one at a time. She was a master of disguise, armed with dozens of wigs. She flipped through assumed and fake identities and employed 33 known aliases; Levin said that he refers to her as "Linda Taylor" because that was the name she was known by at the time of her high-profile trial for fraud. She enchanted and charmed some of her marks, while others were deathly afraid of her.

But Levin's story isn't merely fascinating. It also deepens our understanding of the narratives and reality around welfare.

The Racial Ideas That Don't Neatly Line Up

In the popular imagination, the stereotype of the "welfare queen" is thoroughly raced — she's an indolent black woman, living off the largesse of taxpayers. The term is seen by many as a dogwhistle, a way to play on racial anxieties without summoning them directly.

Taylor's own racial reality is much harder to pin down, however. Born Martha Miller, she was listed as white in the 1930 Census, just like everyone else in her family. But she had darker skin and darker hair. People who knew her family told Levin that she had Native American ancestry. One of her husbands, who was black, said she could look like an Asian woman at times. Another earlier husband and ostensible father to some of her children was white, and during that marriage she gave birth to kids who alternately appeared black, unmistakably white, or racially ambiguous. At times she posed as a Jewish woman. In one photo, she has long, blonde hair.

"She was white according to official records and in the view of certain family members who couldn't imagine it any other way," Levin writes. " She was black (or colored, or a Negro) when it suited her needs, or when someone saw a woman they didn't think, or didn't want to think, could possibly be Caucasian."

Living Off The System

To people who were opposed to welfare, Taylor's colorful transgressions were evidence of just how little oversight there was in the program and how easily it could be abused. (In reality, Taylor stole her money from a host of government services, and defrauded private individuals, too.)

So how much fraud is there really in the welfare system? As Eric Schnurer writes at The Atlantic, it's actually not so clear.

It's not easy to get agreement on actual fraud levels in government programs. Unsurprisingly, liberals say they're low, while conservatives insist they're astronomically high. In truth, it varies from program to program. One government report says fraud accounts for less than 2 percent of unemployment insurance payments. It's seemingly impossible to find statistics on "welfare" (i.e., TANF) fraud, but the best guess is that it's about the same. A bevy of inspector general reports found "improper payment" levels of 20 to 40 percent in state TANF programs — but when you look at the reports, the payments appear all to be due to bureaucratic incompetence (categorized by the inspector general as either "eligibility and payment calculation errors" or "documentation errors"), rather than intentional fraud by beneficiaries.

Levin cites an old government report from a few years after Taylor's fraud trial estimating the amount of overpayment in the Aid to Families with Dependent Children program to be somewhere between $376 million and $3.2 billion. Even back then, when welfare fraud was getting a ton of press attention, the figures were wildly unclear.

"What's clear, though, is that Linda Taylor's larger-than-life example created an indelible, inaccurate impression of public aid recipients," Levin writes. "Linda Taylor showed that it was possible for a dedicated criminal to steal a healthy chunk of welfare money. Her case did not prove that, as a group, public aid recipients were fur-laden thieves bleeding the American economy dry."

Taylor's Other Crimes Were Much, Much Worse

The extent of Taylor's lies and the ostentatious way she committed them made her the perfect face for arguments about profligate welfare cheats. But compared to the constellation of offenses Taylor may have committed or abetted, her fraud looks almost tame.

There were the kidnappings. For years, Taylor would take children from parents who made the mistake of trusting her. She was even suspected in the Fronczak kidnapping, one of the most notorious child abductions of the 1960s. In that case, a woman dressed as a nurse snatched a newborn baby and fled.

Johnnie says his mother often claimed that she worked in a hospital, and that she'd wear a nurse's hat. Rose Termini, without any prompting, begins the narrative of her son's kidnapping by saying that Taylor "once told me she was a nurse and she got around a lot with kids." According to Termini, Taylor would often dress in a white uniform—she says she saw the getup with her own eyes.

In 1977, a man named Samuel Harper told police prior to Taylor's sentencing for welfare fraud that he believed she had kidnapped Paul Joseph Fronczak. He explained that he was living with her at the time, that several other white infants were in her home, and that she left the house in a white uniform on the day of the kidnapping.

And there were the deaths. Taylor posed as a voodoo practitioner and spiritual adviser, and after one or Taylor's particularly naive marks during that scheme turned up dead, Taylor was found with the dead woman's credit card. But police investigators didn't go after Taylor on murder charges, because they were worried it would detract from an ongoing welfare fraud case.

"Linda Taylor's story shows that there are real costs associated with this kind of panic, a moral climate in which stealing welfare money takes precedence over kidnapping and homicide," Levin writes."

If you have time for only one long read this weekend, you should really holler at Levin's mesmerizing story of this colorful, maddening figure who somehow became central to one our country's most intractable and racially charged policy debates.

NPR's Melissa Block spoke with Josh Levin about the article. You can listen to that interview in the player at the top of the page.