Accessibility links
The Extraordinary Story Of Why A 'Cakewalk' Wasn't Always Easy : Code Switch We call something that is easily done a "cakewalk." But why? The surprising answer dates back to a dance popular among slaves and plantation owners in the pre-Civil War South.

The Extraordinary Story Of Why A 'Cakewalk' Wasn't Always Easy

The Extraordinary Story Of Why A 'Cakewalk' Wasn't Always Easy 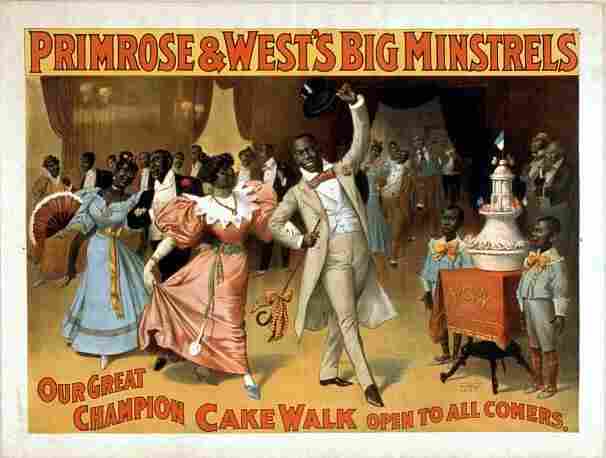 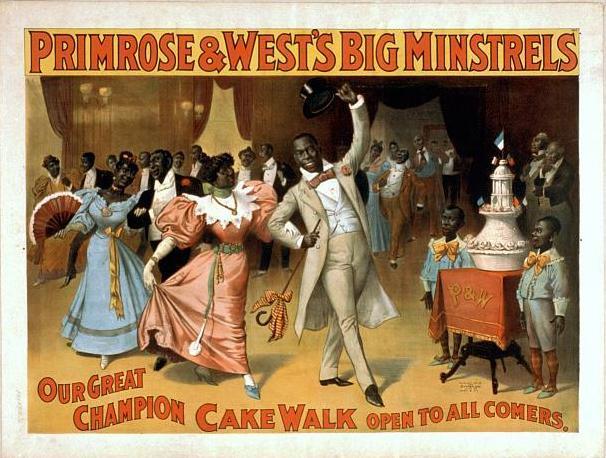 Cakewalk dances were an integral part of minstrel shows for decades.

Anything that can be done with straightforward ease is said to be a "cakewalk." Any action that is "not a cakewalk" is, of course, difficult and complicated.

No surprise, right? But stay with me a little longer.

The cakewalk was a pre-Civil War dance originally performed by slaves on plantation grounds. The uniquely American dance was first known as the "prize walk"; the prize was an elaborately decorated cake. Hence, "prize walk" is the original source for the phrases "takes the cake" and "cakewalk."

Here's how the dance worked: Couples would stand in a square formation with men on the inside perimeter and then dance around the ballroom "as if in mimicry of the white man's attitudes and manners," according to Richard Kislan. The steps included "a high-leg prance with a backward tilt of the head, shoulders and upper torso."

Plantation owners served as judges for these contests — and the slave owners might not have fully caught on that their slaves might just have been mocking them during these highly elaborate dances.

In the 1912 novel The Autobiography of an Ex-Colored Man, James Weldon Johnson has a character describe attending a cakewalk during the Reconstruction era:

"Then the floor was cleared for the cake-walk. A half-dozen guests from some of the hotels took seats on the stage to act as judges, and twelve or fourteen couples began to walk for a sure enough, highly decorated cake, which was in plain evidence. The spectators crowded about the space reserved for the contestants and watched them with interest and excitement. The couples did not walk round in a circle, but in a square, with the men on the inside. The fine points to be considered were the bearing of the men, the precision with which they turned the corners, the grace of the women, and the ease with which they swung around the pivots. The men walked with stately and soldierly step, and the women with considerable grace."

By the 1870s, a cakewalk was a popular feature of minstrel shows. The Oxford English Dictionary notes that usage of the word "cakewalk" really began to take off during this decade. It was also when the word began being used as a way to describe an accomplishment that was easy or simple to obtain. This is not because winning a cakewalk competition was easy. Rather, it was because the dance steps were fluid and graceful. Hard work by the dancers gave the impression of great ease.

The cakewalk was so ingrained in American popular culture and entertainment that beginning in 1892, local cakewalk championships were being held in New York's Madison Square Garden, which hosted a national championship in 1897. The dance had been exported to Europe a few years earlier when it was performed in 1889 at the Paris World's Fair.**

As cakewalk dances became more popular, they gave rise to their own form of music, an early predecessor of what's now known as ragtime. With the increase in popularity, the dance became something of a crossover hit, and started being performed by whites and blacks alike.

Legendary composer Scott Joplin alluded to the cakewalks and their history and connection to ragtime in the lyrics of his song "The Ragtime Dance":

*Like most vaudeville performers of that era, Williams and Walker performed in blackface. This, despite the fact that Williams and Walker were African-American. To distinguish themselves from white performers, the pair began billing themselves as "The Two Real Coons." Walker once explained that using the derogatory name was a good way to get the notice of theater managers.

**The French connection to the dance that began at the World's Fair continued when famed film director Georges Méliès incorporated the dance into his 1903 short film Le Cake-Walk Infernal (The Infernal Cake-Walk). In the film, Méliès' characters dance in hell over a jazz soundtrack. The impressionist composer Claude Debussy also got into the act with his piece Golliwog's Cakewalk.