Accessibility links
Why Being 'Gypped' Hurts The Roma More Than It Hurts You : Code Switch You might know that the word "gypped" — often used to describe being cheated — comes from the word 'gypsy.' But less well known is the fact that it comes from derogative stereotypes about the Roma people.

I never thought about the etymology of the verb "gypped" until the end of college, when my friend, lamenting his stolen iPod, said the word and immediately retracted it. "Isn't that offensive?" he wondered. Until that moment, I had never thought about it either. What sparked our unease was the sudden realization that "gypped" was somehow tied to "gypsy."

"Gypsy" is commonly used to describe the Romani people. But the term carries many negative connotations, and its derivative carries even more: when somebody is "gypped," they are, according to Merriam-Webster, "defrauded, swindled, cheated." 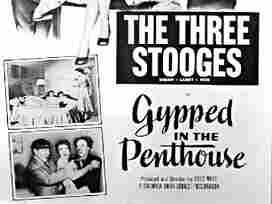 The Three Stooges movie Gypped In the Penthouse is one of many pieces of media that uses the pejorative. Columbia Pictures hide caption

According to the Oxford English Dictionary, the first known recorded definition of the term "gypped" dates back to the 1899 Century Dictionary, which says that it is "probably an abbreviation of gypsy, gipsy, as applied to a sly unscrupulous fellow."

It also appears in 1914, in Louis Jackson & C. R. Hellyer's Vocabulary of Criminal Slang. The noun "gyp" was described at the time as "current in polite circles," and "derived from the popular experience with thieving Gypsies." As a verb, the term is defined as "to flim-flam" and to "cheat by means of guile and manual dexterity." Proper usage? "Gyp this boob with a deuce." I'm not exactly sure what gyp this boob with a deuce means, but it sounds like something stuck between ribald and ridiculous.

F. Scott Fitzgerald used the word in his iconic novel The Great Gatsby: "We had over twelve hundred dollars when we started, but we got gyped out of it all in two days." Simone de Beauvoir used the word in her 1965 book Force of Circumstance: "Turning an incredulous gaze toward that young and credulous girl, I realize with stupor how much I was gypped."

Many people have limited knowledge of the term's origins, and so the word "gypped" isn't quickly going out of fashion. On April 30, 2013, a publisher released a book in a New York Times bestselling series by Carol Higgins Clark titled Gypped: A Regan Reilly Mystery. The book — the 15th installment of the long-running thriller series — had nothing to do with the Roma people, but instead is a murder mystery full of financial scams and intrigue set in sunny California.

After multiple allegations of racist intent with her choice of title, Clark issued a statement that read: "I am truly sorry for any offense caused by using the word 'Gypped' as the title of my book. It was a familiar word since childhood which no one I knew associated with its origin. Since this issue arose, I've asked many people who also had no idea of any negative connotation."

Clark's experience rings true: many people just don't know what the word means, or where it comes from.

"I encounter a lot of people who tell me that they never knew the word 'gypped' had anything to do with gypsies, or that it's offensive — especially when the word is heard not read," says University of Texas at Austin professor Ian Hancock, who was born in Britain to Romani parents. "My response to them is, That's okay. You didn't know but now you do. So stop using it. It may mean nothing to you, but when we hear it, it still hurts."

Hancock tells me the word "gypsy" itself is an "exonym" — a term imposed upon an ethnic group by outsiders. When the Roma people moved westward from India towards the European continent, they were mistaken to be Egyptian because of their features and dark skin. We see the same phenomenon across several languages, not only English. Victor Hugo, in his epic Hunchback of Notre Dame, noted that the Medieval French term for the Roma was egyptiens. In Spanish, the word for gypsy is "gitano," which comes from the word egipcio, meaning Egyptian — in Romanian: tigan, in Bulgarian: tsiganin, in Turkish: cingene — all of which are variations of slang words for "Egyptian" in those languages.

The Roma people originated thousands of years ago not in Egypt, but in Northern India. They were displaced during a series of 11th-century Muslim invasions during the Ghaznavid Empire. Many were taken as prisoners of war back to what is now modern-day Turkey, during the Ottoman plunder of the Byzantine Empire. A majority of already-displaced Romani people later migrated to Eastern and Southern Europe. The Roma language is derived from ancient Sanskrit and still phonetically, grammatically and linguistically resembles tongues with Sanskrit roots like Hindi or Rajasthani. Romani music is still strikingly similar to Indian folk music, and their spiritual practices — despite conversion to local religions over time — still resemble aspects of Hindu cosmology.

The effort to substitute the word "Roma" for the far better-known term "Gypsy" may strike some as futile, but few other groups carry the burden of such heavy stereotypes with so little reprieve.

"In one case, the police received a tip that a blond, blue-eyed girl was living with a Roma family in a Dublin suburb. The tipster believed that the 7-year-old didn't look like the Roma family with whom she lived. The police came and removed the child from the home, despite protests from the Roma family that the child was part of their family."

It is this kind of deep-set suspicion and generalized assumption of deception that drives many Roma to reject the term "gypped." It probably doesn't help that the term was originally meant to refer to Egyptians.