Accessibility links
Comic Artist Yumi Sakugawa On Friend-Love, Identity And Art : Code Switch How should you tell your friends that you're in friend-love with them? Sakugawa, the artist and author of I Think I Am In Friend-Love With You shares what inspires her work. 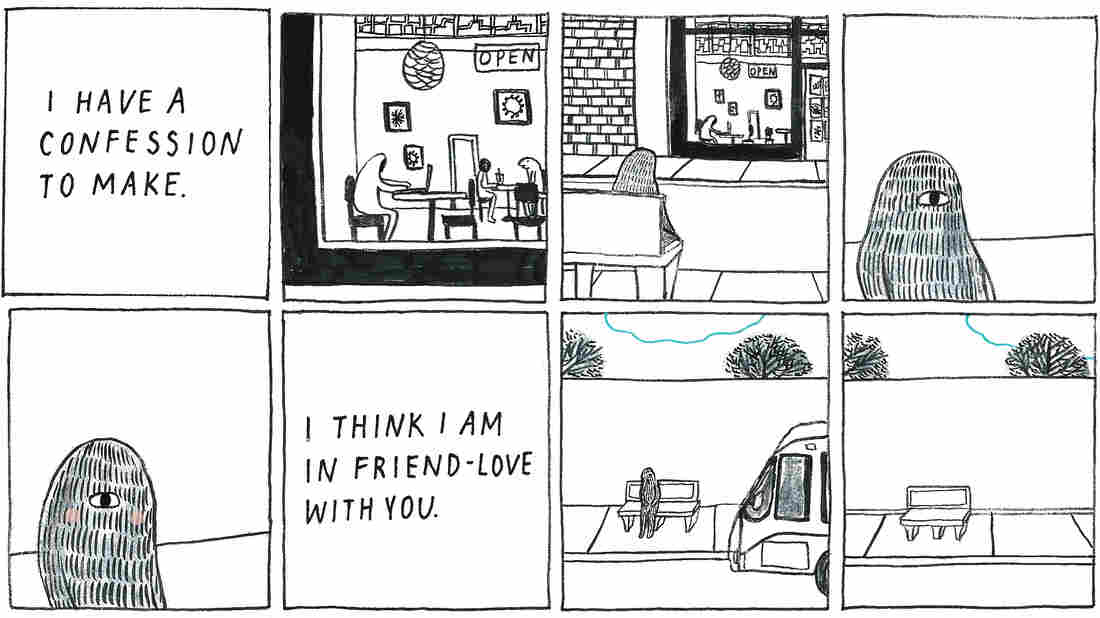 Yumi Sakugawa's book I Think I Am In Friend Love With You helps define the joys of modern friendships. Yumi Sakugawa hide caption 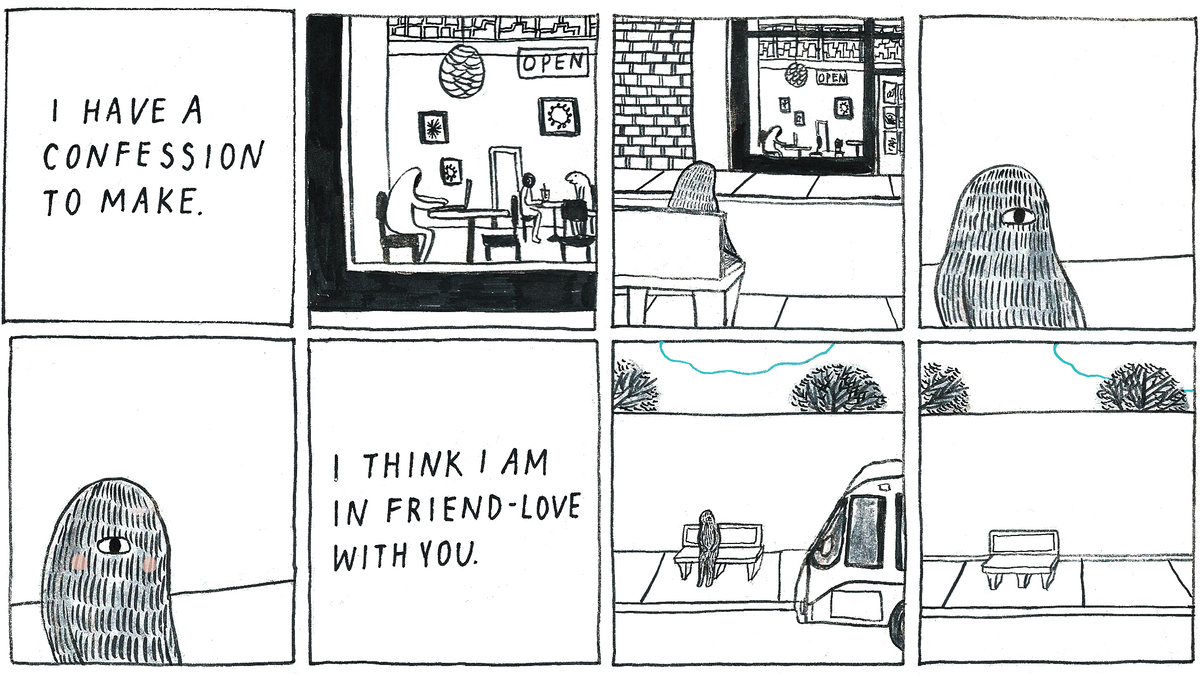 Yumi Sakugawa's book I Think I Am In Friend Love With You helps define the joys of modern friendships. 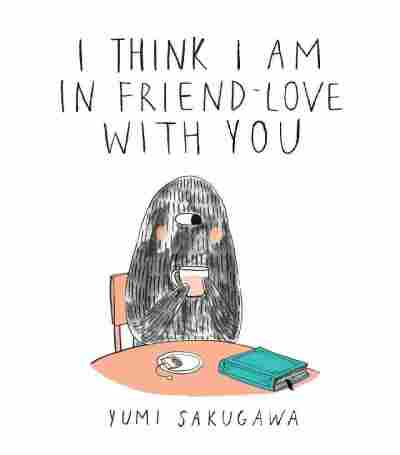 I Think I Am in Friend-Love With You

About a month ago, I asked my followers on Twitter if they had any recommendations for a comic artist whose work I should check out. Person after person brought up Yumi Sakugawa, a California-based artist. And I was familiar with her work: she's the brains behind the ever-nostalgic strip, "Claudia Kishi: My Asian-American Female Role Model Of The 90s."

Her more recent work I Think I Am In Friend-Love With You was published as a book in December. The comic, which first hit the Internet in 2012, looks at a modern-day friendship — friend crushes — and expresses all the delightful, little things we hope our best (and even not-so-best) pals will do for us.

Sakugawa, 29, never knew how she'd combine her two loves, drawing and writing. She'd been doing both since she was a kid but didn't merge them until college, when she started making comics. But it's clear that she's both a comic artist and a writer — the two are inseparable. Her words, given a natural staccato by the confines of each panel, flow with a rhythm that the images help propel.

Her work has an eerie, wondrous quality to it, blipped with panels that will make your heart soar and dip and soar again. Themes of space and love pull readers into a pensive world of fantastical creatures. And when her characters aren't fictitious monsters, they're all undoubtedly Asian-American.

(You can follow Sakugawa on all the Internet things and ask her more questions about her work when she's on tour.)

I very vividly remember that the month when I made I Think I Am In Friend Love With You. It was in November 2012. And for some reason, that month in particular, it was a very introspective month for me, catching up with college friends I hadn't spoken with in a very long time.

So it was a very strange window of time for me to really, really think about the person I'd become, the people who've passed through my life who've really shaped who I am, as a person and as an artist.

And I think I was particularly drawn to really reminiscing over the relationships I'd had in college — platonic or otherwise. And I felt like it was college in particular where I had a lot... it wasn't so much having crushes on people, but having, really, being attracted to certain people for specific reasons, whether it was really just wanting to have a connection with the person in a very intimate and deep way. So it was really thinking about my college days and specific people who inspired that emotion in me.

On how social media and technology plays out in her work 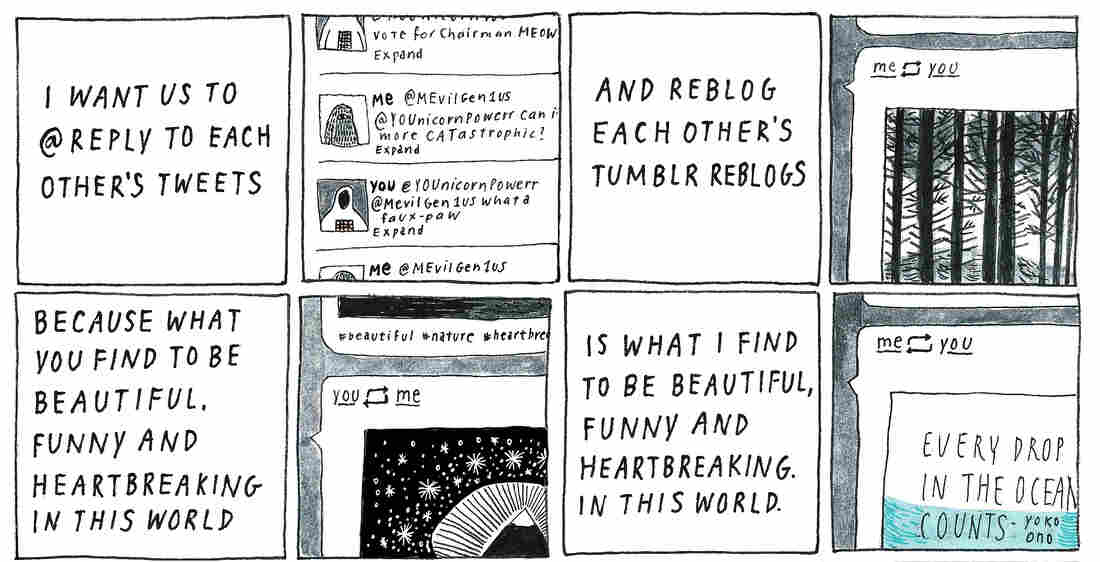 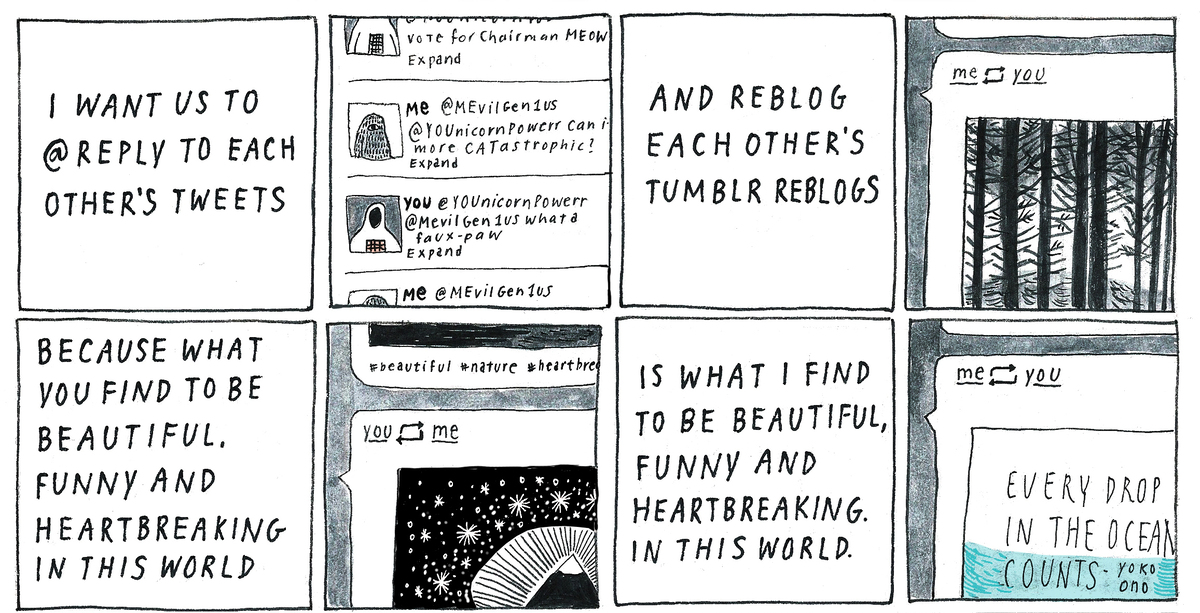 "You really get a thrill when somebody you like or somebody you want to be friends with connects with you," Yumi Sakugawa says.

I was a freshman in college when Facebook first came out. I think that Facebook, instant messaging, Live Journal — online blogs in general — really did shape the way that I express myself and interacted with other people. It ... worked itself into the social fabric of my day-to-day life and it still does to this day. ...

You really get a thrill when somebody you like or somebody you want to be friends with connects with you. ... At least for me, I definitely get excited when people comment or make some sort of connection through online tools. So it definitely comes from an autobiographical place.

My characters do tend to be Asian-American, even if they don't explicitly deal with Asian-American issues. There are always going to be little details that signify that they're Japanese-American or Asian-American, whether it's their names or the food that they eat or the things they talk about.

I think it does, in some cases, more explicitly than others. Definitely with Claudia Kishi, that came from a very Japanese-American point of view, and from growing up as a person of color and not really seeing people of color as far as TV shows, books, toys, movies and video games and everything else. I feel like being a second-generation person of color born to immigrant parents, I really do think that sort of — however subconsciously — [does] play into my creative perspective on juggling dual realities, barriers in connecting with other people, just sort of having dual perspectives on reality. ...

When my stories aren't so based on monsters or fantastical creatures, my characters do tend to be Asian-American, even if they don't explicitly deal with Asian-American issues. There are always going to be little details that signify that they're Japanese-American or Asian-American, whether it's their names or the food that they eat or the things they talk about. I think it has a significant role in how I make my artwork and how I tell my stories.

On why her work's themes veer toward space and the spectacular 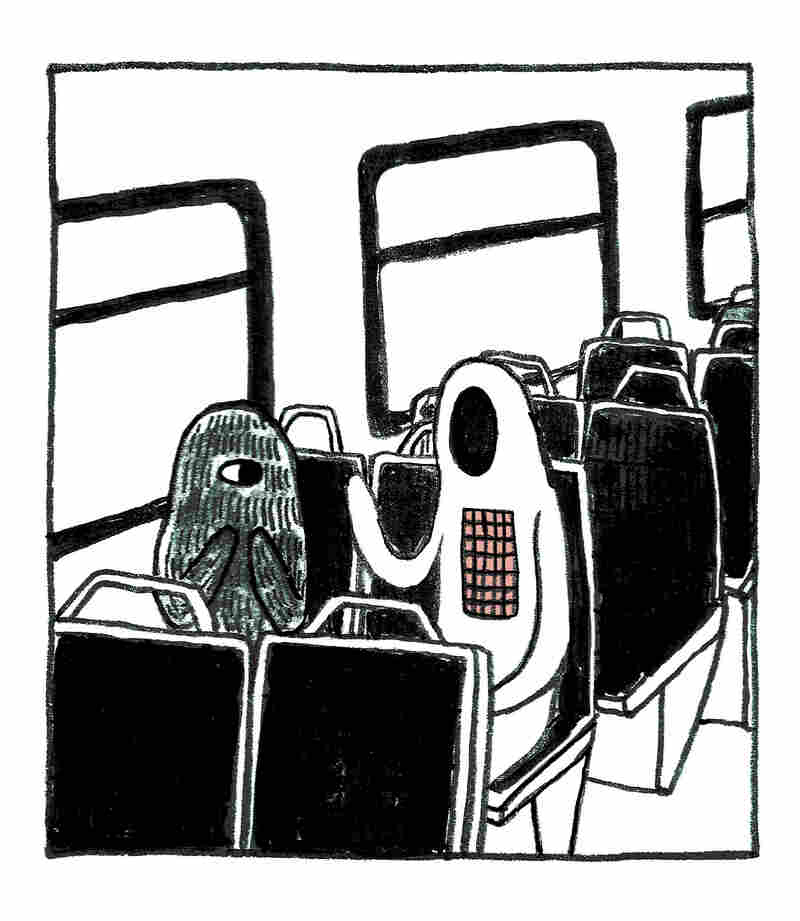 How do you know if you're in friend-love with someone? Yumi Sakugawa hide caption 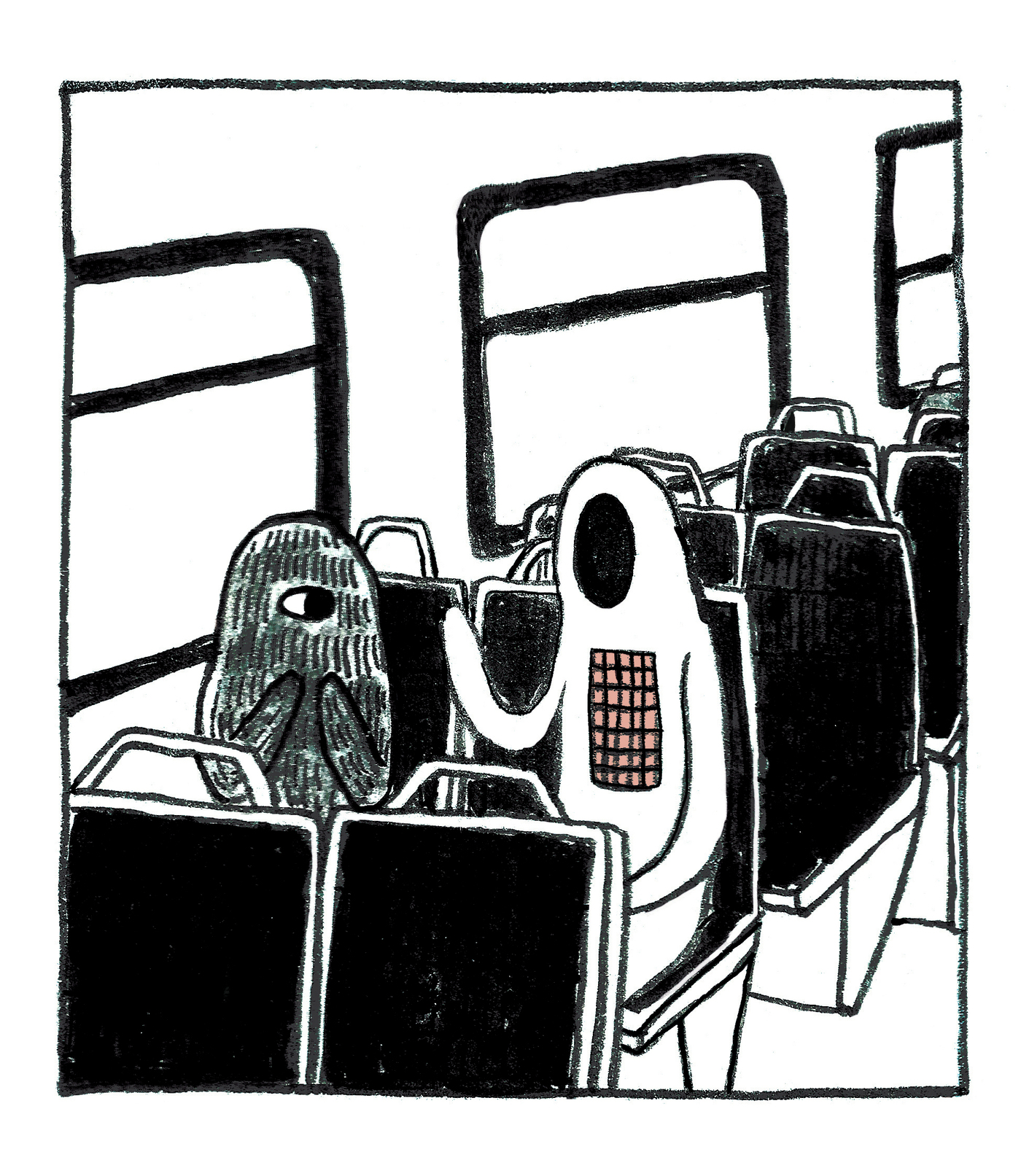 How do you know if you're in friend-love with someone?

Well, around the same time that I decided to really pursue making comics more seriously, I really got into meditation. ... A lot of people ask me — I get this all the time — 'Are you Buddhist? Are you Zen?' And my answer is always, 'I don't always necessarily identify myself with Buddhism, but the philosophy is something I'm always interested in and am very curious about learning more about.'

So I am very influenced by Buddhist philosophies, Buddhist schools of thought. So much of it deals with being mindful, being fully aware of just a very subjective nature of reality, the illusion of reality, sort of the dichotomy of samsara or nirvana ... those are things that I do think about a lot, and I think it definitely, that interest reflects itself in the comics.

On one of her favorite stories she drew this past year

You know, with "Moon Between The Mountains," it honestly started as a random doodle of a kitty human being left on the door step of these strange, wrinkly-looking people. And as I was getting the story more, I was really drawn to the idea of telling a story about a character who obviously looks very different from her human counterparts in terms of appearance and is able to, more or less, adjust to the society that she belongs to.

But no matter what she does or how successful she becomes in life, she would never quite be able to shake off the mysterious origins of her life or really change the fact that she is different or marked in some way. ... It wasn't until after I made the story that it sort of clicked to me that it does come from, that there are parallels with the immigrant experience, being a minority in society, so I think those things were very subconsciously tied into telling the story. But it wasn't until after the fact that I sort of made the connection for myself.