Accessibility links
When King And Johnson Joined Forces To Fight The War On Poverty : Code Switch This Saturday, Jan. 18, marks the 50th anniversary of a historic meeting between then-President Lyndon B. Johnson and the Rev. Martin Luther King Jr. at the White House. The president and the preacher came together to coordinate efforts to fight the War on Poverty. 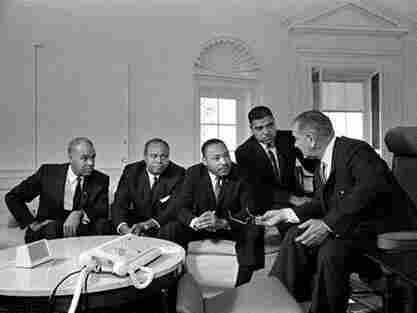 When President Lyndon B. Johnson met at the White House with the Reverend Martin Luther King, Jr. on Jan. 18, 1964, the two men were near the peak of their powers and the country was in a maelstrom.

Johnson had been President for less than two months following the assassination of President John F. Kennedy. Ten days before the meeting, in his State of the Union address, Johnson said: "No memorial or eulogy could more eloquently honor President Kennedy's memory than the earliest possible passage of the civil rights bill for which he fought." And, as if that wasn't enough, just two weeks before he had launched a war on poverty.

The Reverend King, in turn, had just been anointed "America's Gandhi" by Time magazine, which pronounced him man of the year. The magazine explained the selection:

"The U.S. Negro, shedding the thousand fears that have encumbered his generations, made 1963 the year of his outcry for equality, of massive demonstrations, of sit-ins and speeches and street fighting, of soul searching in the suburbs and psalm singing in the jail cells."

Six months before the meeting, King had delivered the now-famous "I Have A Dream" speech at the March on Washington. Four months had passed since the bombing of the street church in Birmingham and the murder of four little girls.

The two men had already signaled their trust in one another. Johnson and King spoke three days after Kennedy's assassination. The President told the preacher he wanted to let him know "how worthy I'm going to try to be of all your hopes." King, in turn, had told Time magazine, "[The President] means business," King said. "I think we can expect even more from him than we have had up to now."

Johnson solicited the advice of King and three of his allies — Roy Wilkins, executive director of the National Association for the Advancement of Colored People; National Urban League Executive Director Whitney Young and Congress of Racial Equality National Director James Farmer — in formulating his legislative agenda for the year.

In a recording of the call where LBJ arranges the meeting with Wilkins the president eagerly asked "When are you gonna get down here and start civil rights?" He encouraged Wilkins to persuade the press to give them "equal time" on television to promote passage of the proposed civil rights bill. And in the call he pushed Wilkins and requested, "a little direction. These boys are pretty theoretical down here, and if I get it passed, I'm going to have to have more practical plans."

King, Young, Farmer and Wilkins (a murderer's row of nonviolent activists) showed up for the White House with specific proposals and facts.

Though the 90-minute meeting was not open to the press, The Chicago Daily Defender published the four activists' comments to the media outside the White House in an article headlined "LBJ Meets With Negro Leaders; All Five Worry About Poverty."

The civil rights leaders said the discussion with the president revolved around how to address the fact that poverty afflicted blacks far more than whites.

King walked out of the White House having agreed to help Johnson's anti-poverty agenda but emphasized that blacks would not accept "any watering down" of a civil rights bill.

So Johnson and King left to build coalitions in Congress and the streets respectively.

As the House of Representatives passed the civil rights bill in February, King went with the Southern Christian Leadership Conference to subdue segregationist violence in St. Augustine, Fla.

After months of enduring violence and arrests for civil disobedience, King left St. Augustine in June after local businessmen promised to desegregate.

Shortly after, the Civil Rights Act would be approved by the Senate.

Johnson invited the four activists back to the White House to witness the signing of the Civil Rights Act. They accepted. On July 2, in the East Room of the White House, Johnson signed the provision into law. Less than six months after the January meeting. The president gave King the pen used to sign the bill. King described it as one of his "most cherished possessions."