Accessibility links
For Persian Jews, America Means 'Religious Pluralism At Its Best' : Code Switch Judaism has a rich history in Iran dating back millennia. But in the late 1970s, thousands of Iranian Jews fled to the U.S. in search of a new home. They have integrated their ancient Persian heritage into American life.

For Persian Jews, America Means 'Religious Pluralism At Its Best'

For Persian Jews, America Means 'Religious Pluralism At Its Best' 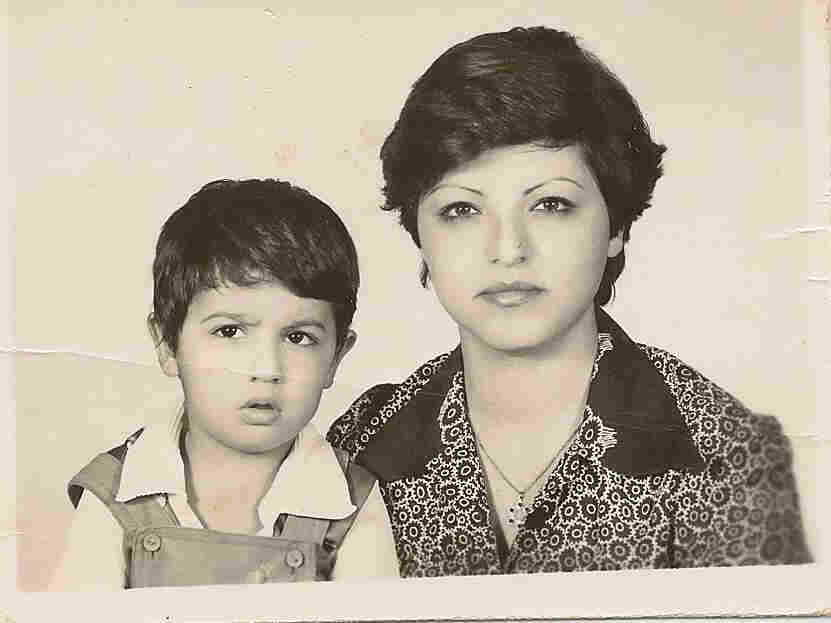 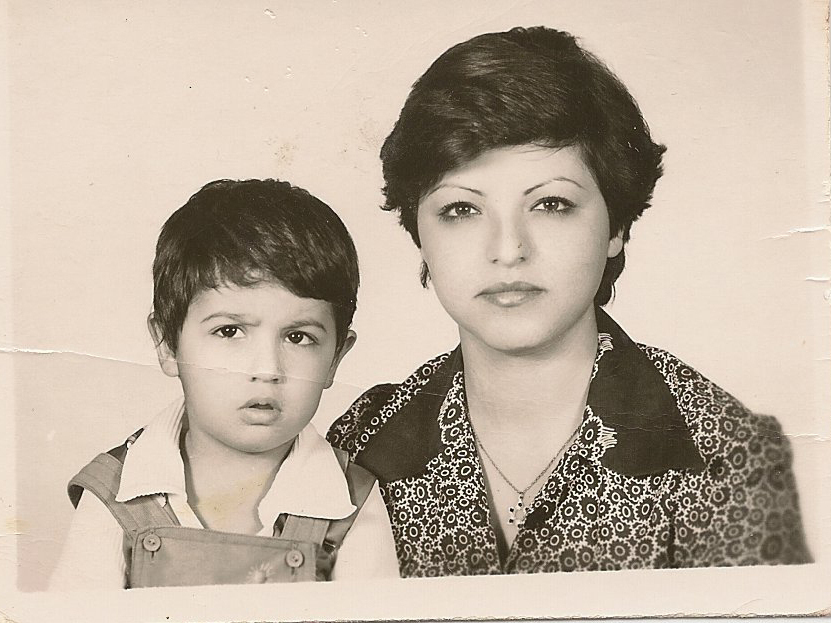 Roben Farzad and his mother in their 1978 visa photo

Code Switch has been writing about some overlooked cultural interactions that have helped shape what Jewish identity is today, and we continue the series with a post by Tell Me More Senior Producer Davar Ardalan on Iranian Jews.

Judaism has a rich and millennial history in Iran including the era 2,500 years ago when the first Persian ruler declared religious freedom. But during the Islamic Revolution, as the last Persian monarch left Iran — 35 years ago this month — thousands fled to the United States in search of a new home.

Roben Farzad and his family fled Iran for America at the end of 1978. The Farzads hailed from Shiraz, the city of poets and gardens. In the 1950s, Roben Farzad's uncle changed the family's last name from the Persian Jewish surname Sarahkhatoon, meaning "Lady Sarah," to the more common surname Farzad. The last name Sarahkhatoon had gotten his sons beaten up in grade school.

After leaving Iran, they settled in Miami, where Roben's aunt was in medical school. The cultural transition wasn't easy.

"I spent much of those first few years in the States watching Nightline* with my parents," Roben says, "and witnessing Dad freak out women at the supermarket. You see, he liked holding hands of complete strangers to get his heavily accented point across: 'Hi. Would you geeve to me a date?' He was trying to buy pitted dates."

Roben went on to graduate from Princeton University and Harvard Business School and has been a contributor to Businessweek, PBS and NPR. Today he lives with his wife and two children in Richmond, Va. — an Iranian Jew in the former capital of the Confederacy. Roben takes pride in the fact that his son, whose father and grandparents fled persecution abroad, is now taught by the great-great-great granddaughter of an escaped slave.

History is a defining force for Jews in Iran and their diaspora. Many Iranian Jews trace their lineage back to the beginning of the Persian Empire in 539 B.C., when Cyrus the Great captured Babylon.

In 1879, a British archaeologist unearthed a clay cylinder in Mesopotamia — modern-day Iraq — that was made following Cyrus' conquest. The cuneiform script mandates cultural and religious tolerance, respect and equality within his kingdom.

Author and scholar Houman Sarshar says the Cyrus Cylinder "is a great source of pride for me as an Iranian. As a Jewish Iranian, I find a deep emotional connection with that cylinder, because it marks the event that liberated Jews from Babylonian slavery on Oct. 29, 539 B.C. and subsequently led my forefathers to settle in Iran."

An exhibit last year featuring the Cyrus Cylinder was one of the most popular on record for the Getty Villa in Los Angeles, where many Persian Jews now live.

#IranianJews seem to have blossomed in the US in ways that our great grandparents generation couldn't have dreamed of. Proud 2b part of it

Sarshar, who was interviewed on NPR in 2002, says classical Persian art and music was kept alive for centuries by Persian Jews. After Shiism became the dominant creed of Islam in the 16th century, he says, all non-liturgical music was banned in Iran.

Eventually, many Jews became practice-for-hire musicians, "in part filling the void left behind by those who had either fled or simply elected no longer to play music," Sarshar says. For the next 400 years, Jewish musicians performed at various life cycle ceremonies throughout Iran.

With the onset of the Islamic Revolution in 1979, thousands of Persian Jews fled to the United States.

A current exhibit at the Yeshiva University Museum in New York called "Light and Shadows" explores the artistic and cultural experience of Iranian Jews through rare archaeological artifacts.

Saba Soomekh, author of From the Shahs to Los Angeles: Three Generations of Iranian Jewish Women Between Religion and Culture, was born in pre-revolutionary Iran, where her father would recite songs to her from Persian poets like Rumi and Hafez.

Saba and her family fled Tehran for Los Angeles in 1978 — and they weren't alone. "I know of one school that asked parents to not speak Persian on campus because the non-Persian speaking parents felt excluded," Saba says. At her high school in the early 1990s, "our teachers were taking Persian language classes in order to understand what the students were saying to each other." 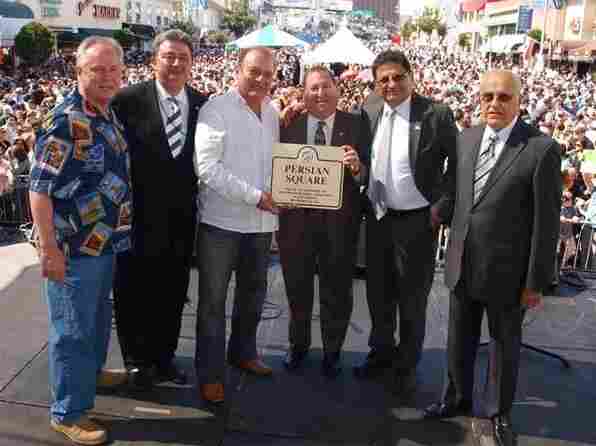 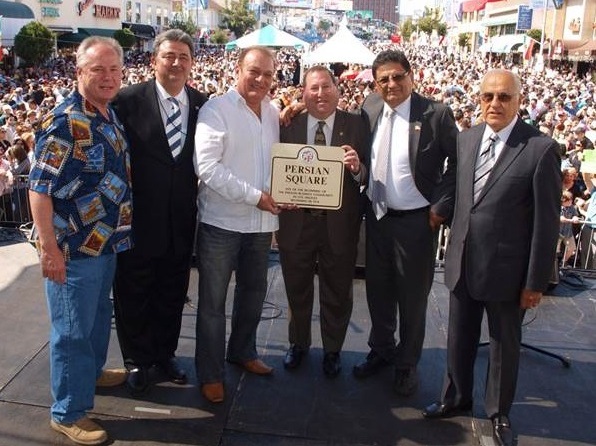 Soomekh is now a lecturer at California State University, Northridge, where she teaches religious studies. She says there is tremendous diversity within the Persian Jewish community. Some Iranian Jews have found more liberal ways to express their religion, but others have become much more traditional since coming to America. For Soomekh, this is religious pluralism at its best.

"In Iran, you only had one type of Judaism: traditional," she says. "Iranian Jews found themselves in Los Angeles and now they can pick which Jewish movement they believe aligns best with their religious practice."

* Nightline was especially significant to Iranian immigrants because it had its beginnings when revolutionaries stormed the U.S. embassy in Tehran and took Americans hostage for 444 days. Nightline and its host Ted Koppel provided ongoing coverage of the crisis.

For further background, archival content and behind the scenes interviews, check out our Flipboard magazine.

As part of our series, we also wrote about Latin-Jewish cooking and music. Share your ideas on Jewish cross-cultural interactions with us. Send your thoughts to Emily Siner or tweet at Code Switch.